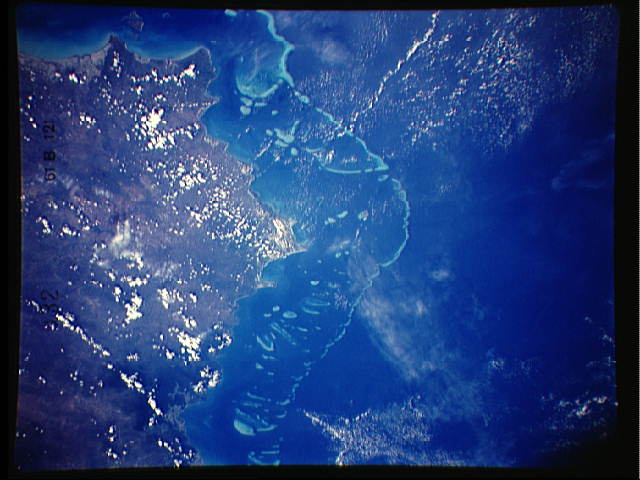 Stretching almost 2,000 kilometers (1250 miles) along the
northeastern coast of Australia, the Great Barrier Reef is
the Earth's largest colonial organism. The complex of
individual islands and atolls are created by the calcium
carbonate secretions of coral polyps that occupy a very
restricted niche. The polyps thrive at water depths between
mean low tide and the limit of sunlight penetration (about
90 meters). Water temperatures must remain between 24 and
28 degrees C throughout the year and salinities must be in
the normal range (32-35 parts per million). The water must
be sediment -free to permit sunlight penetration and prevent
suffocation of the coral polyp. The calcareous remains of
tiny creatures called coral polyps and hydrocorals provide
the basic building material for the reefs while the remains
of coraline algae and organisms called polyzoas provide the
cement that holds the structure together. When fossilized,
such reefs and the debris eroded from them form thick
limestone units
The ocean side of the reef complex falls along the 200
meter contour of the continental shelf, and the primary
complex is separated from the mainland by a lagoon 30 to 50
kilometers wide. The distribution of the coral islands and
distances separating them from the mainland is explained by
a lowered global sea level during the ice ages of the past
two million years. When sea level fell by over 100 meters,
coral reef growth could occur only along the edge of the
continental shelf. Reefs landward of that margin perished
and began to undergo erosion to form isolated peaks that
today are the substrate for isolated islands in the lagoon.
The warm waters of the Australian continental shelf vary
very little with depth because of the stirring action of the
southeast trade winds. These winds pound the outer edge of
the reef for 9 months of the year, and this also keeps the
reef supplied with sea water rich in the organic material
needed by the growing coral.
Today, the reef ecosystem is threatened by the
increased sedimentation in the coastal lagoon caused by
farming and ranching in Queensland. Through the reef and
its lagoon are restricted from shipping, an oil spill or
ship bilging by ocean going vessels can damage the delicate
reef environment.
This photograph was taken using a Linhof camera, 95 by
120 mm format, using a 250 mm lens from an altitude of 200
nautical miles.