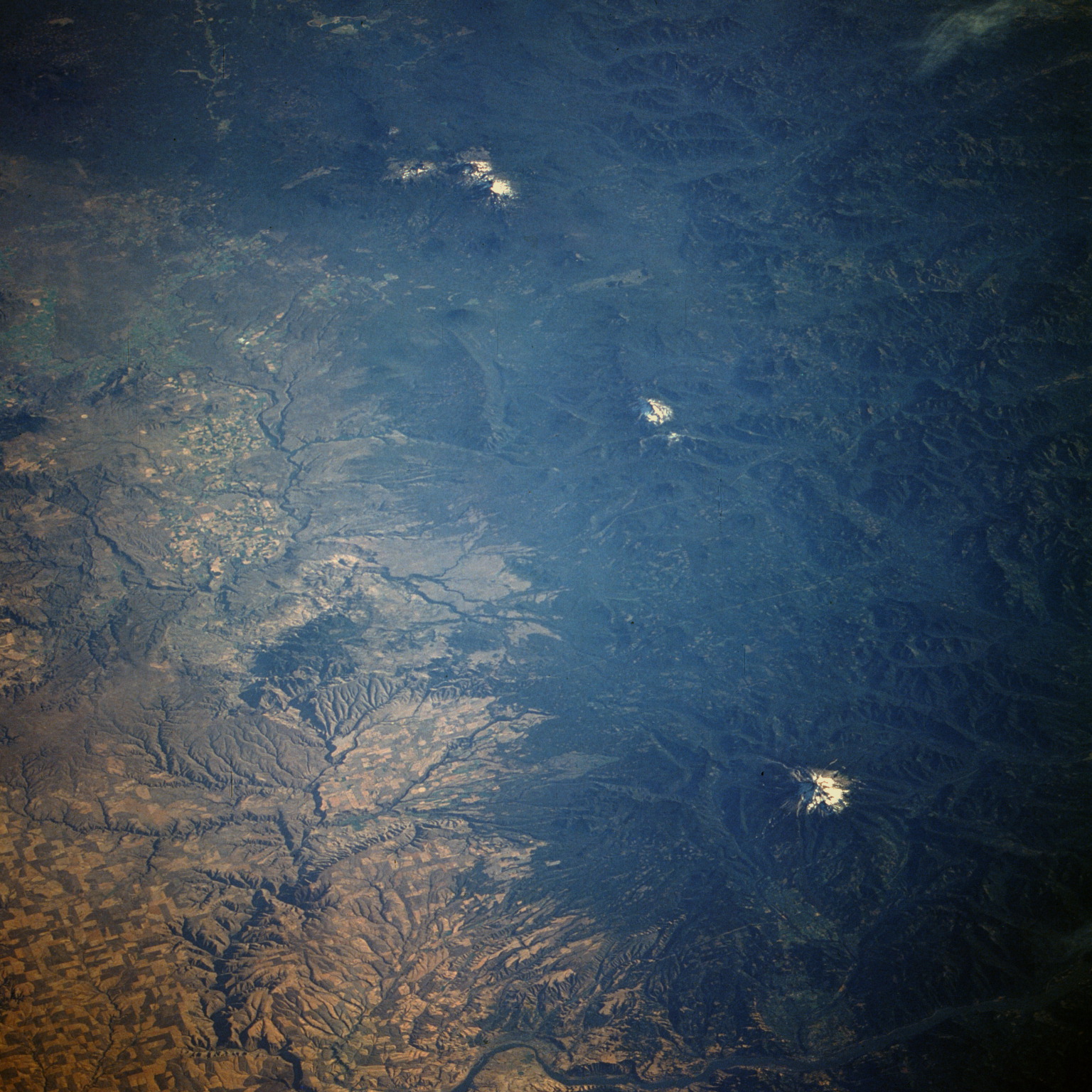 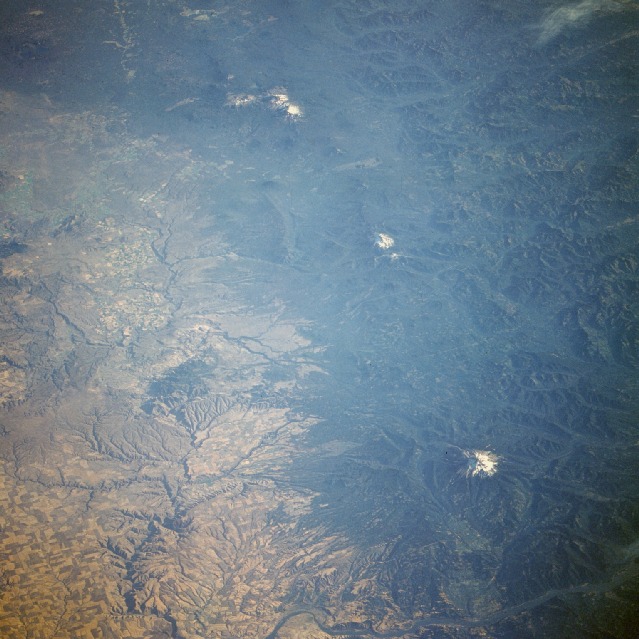 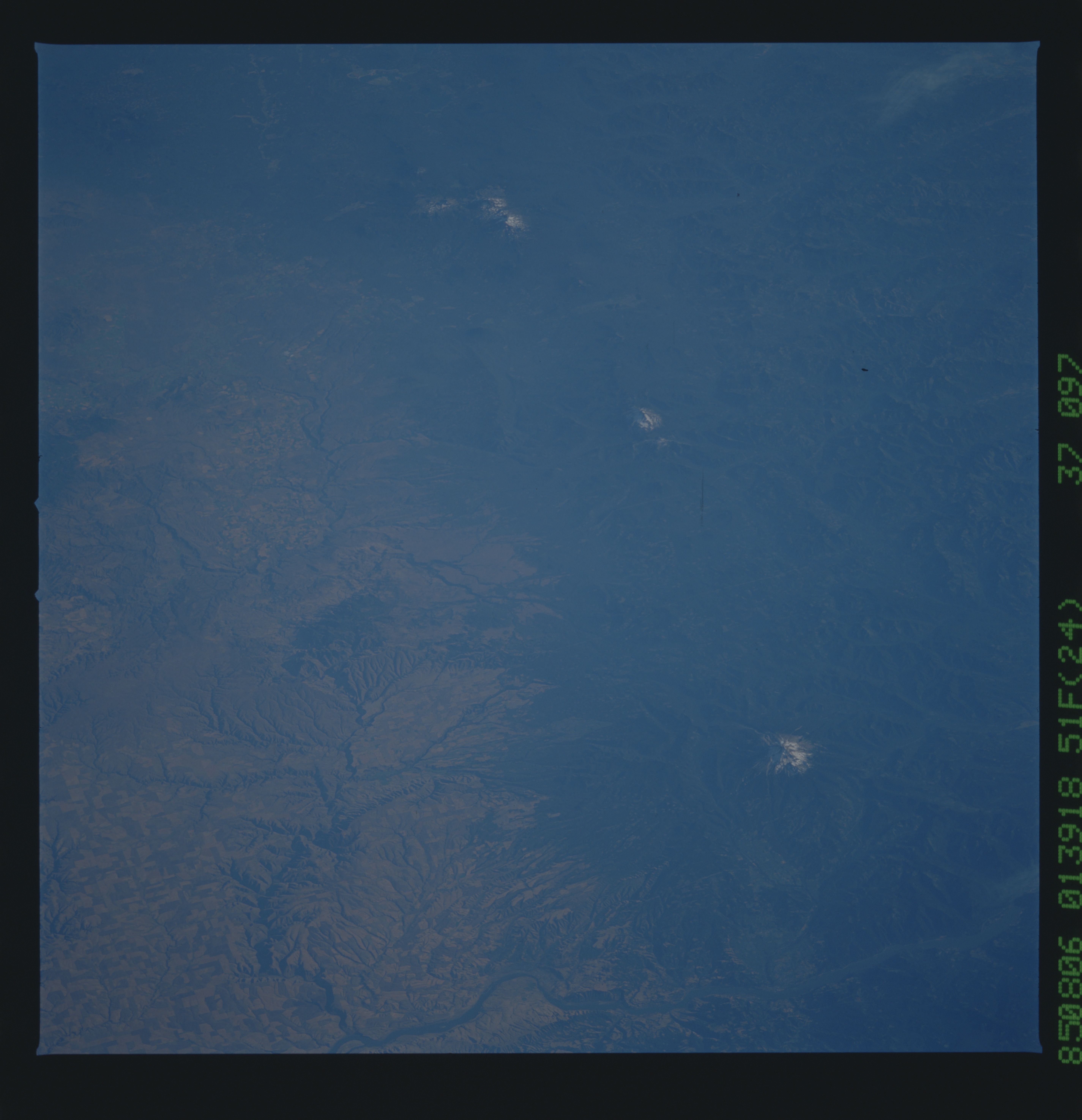 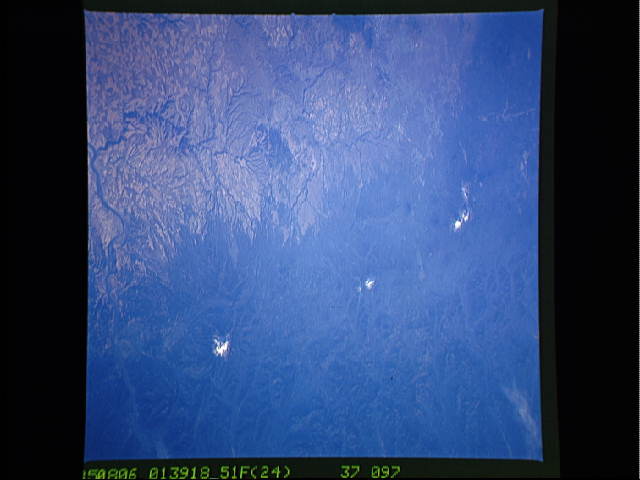 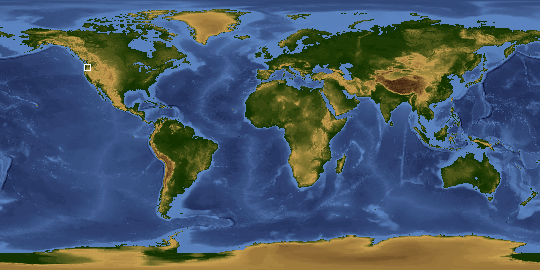 Other options available:
Download Packaged File
Download a Google Earth KML for this Image
View photo footprint information
Image Caption: STS51F-037-0097 Cascade Range, Oregon, U.S.A. August 1985
The Cascade Range of central and northern Oregon can be seen in this south-southwest-looking, low-oblique photograph. The snow-covered peaks visible from north to south are Mount Hood, Mount Jefferson, Three Sisters, and Mount Bachelor. The Cascade Range extends south 700 miles (1125 kilometers) from British Columbia, Canada, to northern California where it joins the Sierra Nevada. The Cascades, paralleling the Coast Ranges and lying inland from the Pacific Ocean 100 to 150 miles (161 to 241 kilometers), began to form approximately 65 million years ago when the continental plates began to shift. The Pacific Ocean shoreline followed the western edge of the newly uplifted range. About 17 million years ago when the continental plates shifted again, the Coast Ranges emerged from the sea, and volcanic activity increased within the Cascades, continuing for the next 15 million years. About 2 million years ago, the first of many ice ages occurred, covering all but the higher peaks of the Cascades with glaciers and shaping them into their present forms. The last of the glaciers retreated into Canada about 13 000 years ago. Since that time, volcanic activity has continued, and today many of the volcanic peaks of the Cascades are covered with snowfields and glaciers; forests cover extensive areas of the range. Receiving more than 100 inches (254 centimeters) of precipitation annually, the Cascades are a major source of water in the Pacific Northwest; they supply hydroelectricity west of the range and irrigation for the dryer, fertile eastern side of the range. East of the range are the Deschutes River Canyon and the Columbia Plateau with its brownish-yellow-colored fields. The Columbia River and the small city of Hood River, Oregon, are visible (north-central to the northeast portion of the photograph). Just south of the river stands the snow-covered peak of Mount Hood, the highest point in Oregon. A symmetrical volcano with glaciers and forested slopes, Mount Hood is a favorite mountain-climbing and skiing center, second only to Japan's Mount Fujiyama as the world's most often-climbed volcanic snow peak.