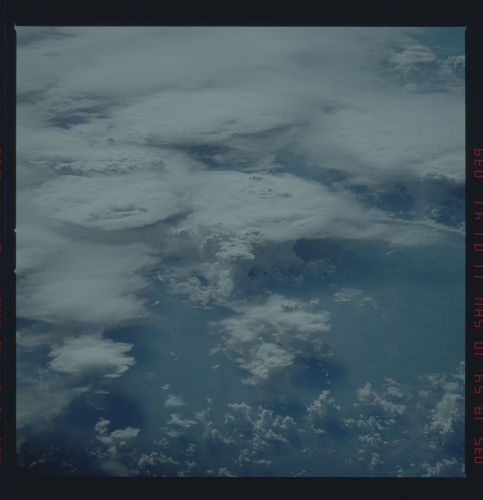 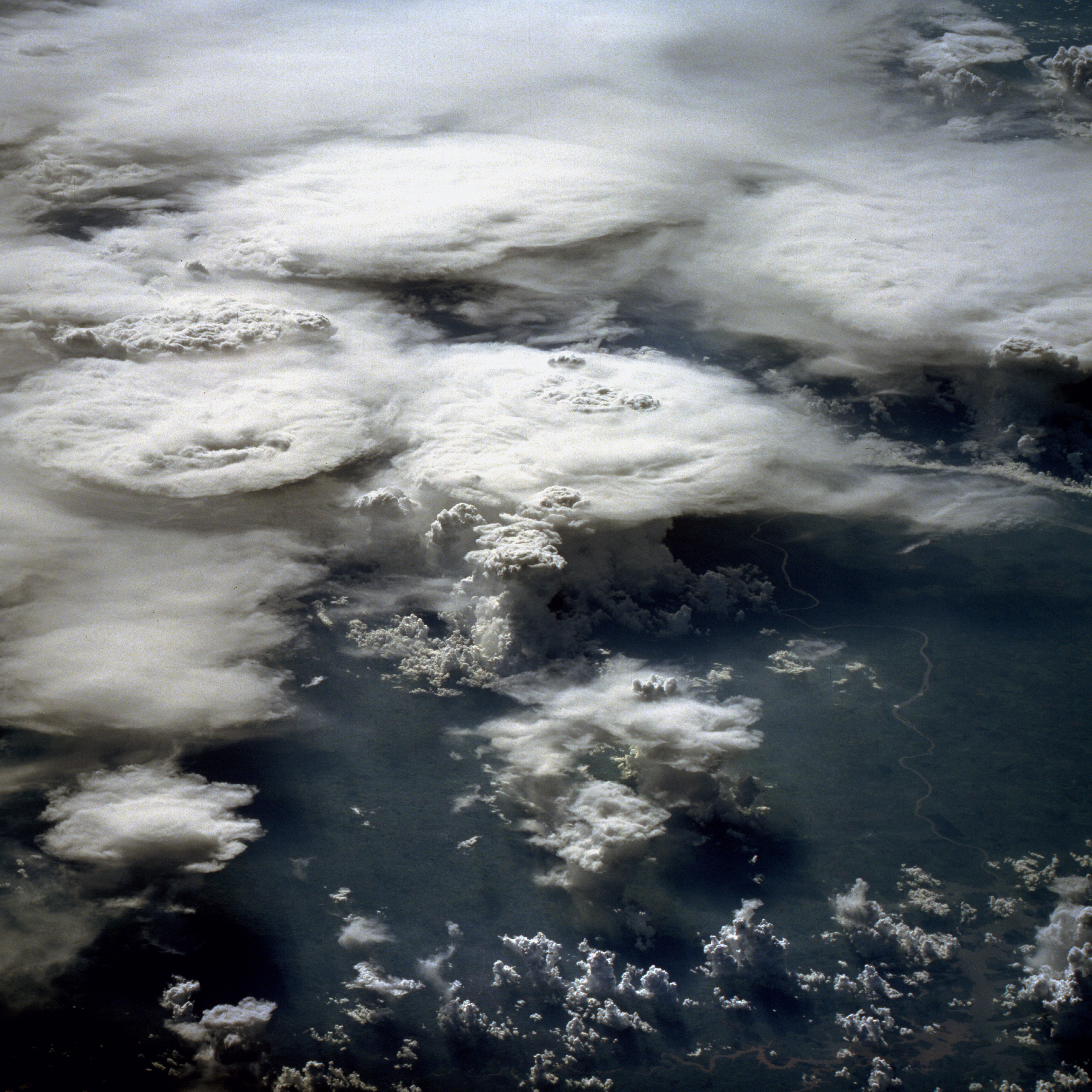 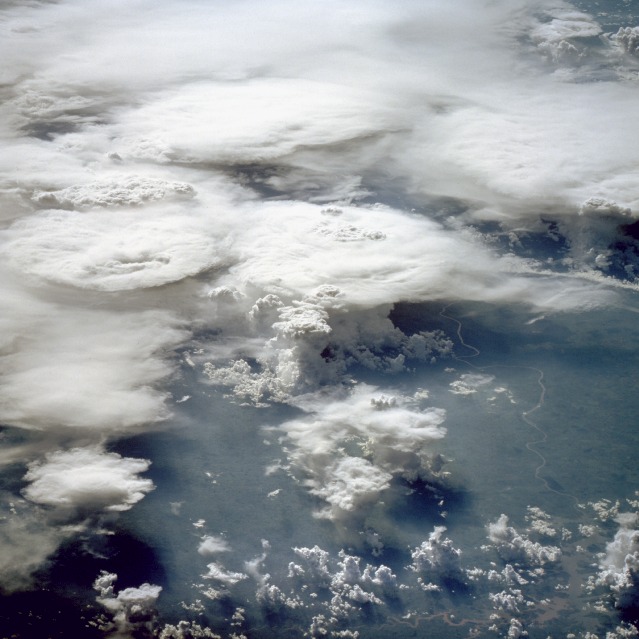 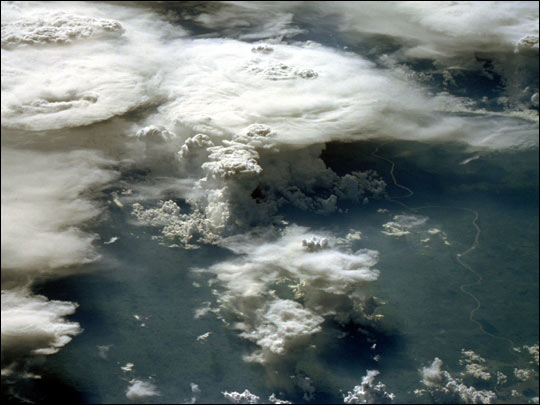 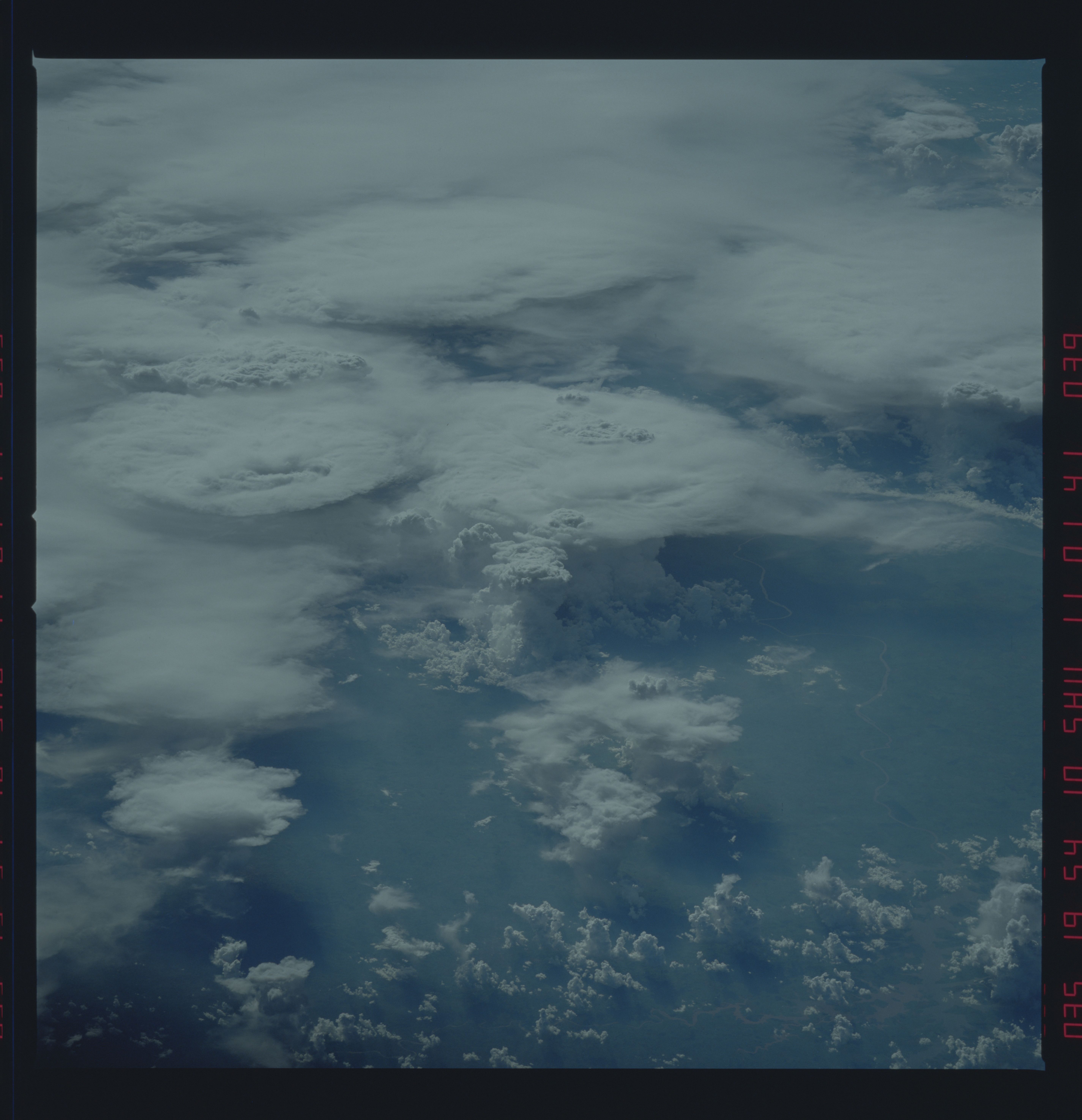 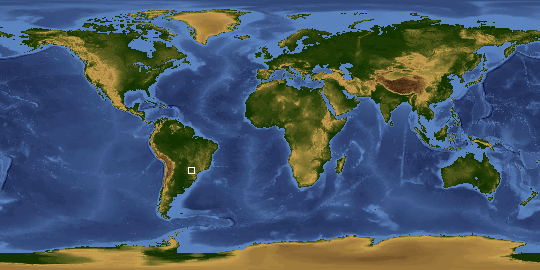 Other options available:
Download Packaged File
Download a Google Earth KML for this Image
View photo footprint information
Download a GeoTIFF for this photo
Image Caption: Thunderstorms over Brazil
This photograph, acquired in February 1984 by an astronaut aboard the space shuttle, shows a series of mature thunderstorms located near the Parana River in southern Brazil. With abundant warm temperatures and moisture-laden air in this part of Brazil, large thunderstorms are commonplace. A number of overshooting tops and anvil clouds are visible at the tops of the clouds. Storms of this magnitude can drop large amounts of rainfall in a short period of time, causing flash floods.

However, a NASA-funded researcher has discovered that tiny airborne particles of pollution may modify developing thunderclouds by increasing the quantity and reducing the size of the ice crystals within them. These modifications may affect the clouds' impact on the Earth's "radiation budget," or the amount of radiation that enters and leaves our planet.

Steven Sherwood, a professor at Yale University, found that airborne aerosols reduce the size of ice crystals in thunderclouds and may reduce precipitation as well. Using several satellites and instruments including NASA's Total Ozone Mapping Spectrometer (TOMS) and NASA's Tropical Rainfall Measuring Mission (TRMM) satellite, Sherwood observed how airborne pollution particles (aerosols) affect large thunderstorms, or cumulonimbus clouds in the tropics. Common aerosols include mineral dust, smoke, and sulfates. An increased number of these particles create a larger number of smaller ice crystals in cumulonimbus clouds. As a result of their smaller size, the ice crystals evaporate from a solid state directly into a gas, instead of falling as rain. Sherwood noted that this effect is more prevalent over land than open ocean areas.

Previous research by Daniel Rosenfeld of Hebrew University revealed that aerosols and pollution reduced rainfall in shallow cumulus clouds of liquid water, which do not have the capability to produce as much rainfall. Sherwood expanded on that research by looking at cumulonimbus clouds with more ice particles. Studies have also proven that ice particles are smaller in the upper reaches of thunderclouds when there is more pollution and when the rising air in the clouds (convection) is stronger. Aerosols seem to have the most influence on seasonal and longer timescales such as during the warmer months when plants and undergrowth are burned to clear fields.

Over areas where biomass burning occurs, such as South America, aerosols have been found to reduce the diameter of ice crystals in the clouds by as much as 20 percent. Areas over deserts, such as Africa's Sahel Region where dust is a primary aerosol, there was a 10 percent decrease in the diameter of ice crystals in cumulonimbus clouds. Aerosol particles are necessary for clouds to form, and it has been suspected that clouds might be altered by large concentrations of them. By looking at ten years of aerosol data and statistically analyzing many thunderclouds, Sherwood was able to confirm that they were affected.

Sherwood found that ice crystals are smaller in clouds over continents than oceans, which could be attributed to the amount of pollution generated over land. The highest values occur widely over Northern Africa, where desert dust and smoke from agricultural burning occur. Intermediate values prevail over much of Asia, through the Indonesia region and into the south Pacific. The largest ice crystal sizes were found over the eastern Pacific and southern Indian Oceans.

Sherwood's article, "Aerosols and Ice Particle Size in Tropical Cumulonimbus," appears in the May 1, 2002, issue of the American Meteorological Society Journal of Climate. This work was performed under the NASA Earth Observing System/Interdisciplinary Science (IDS) program under the Earth Science Enterprise (ESE).