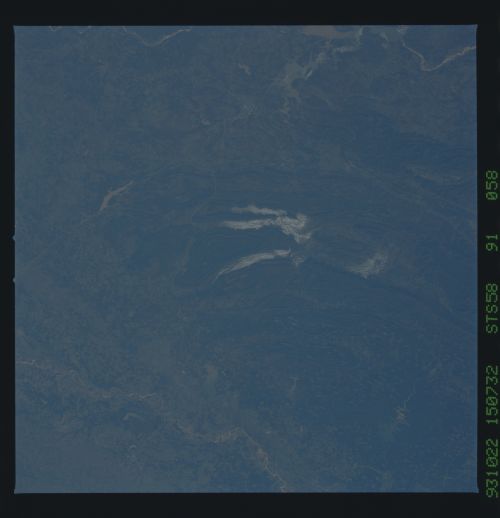 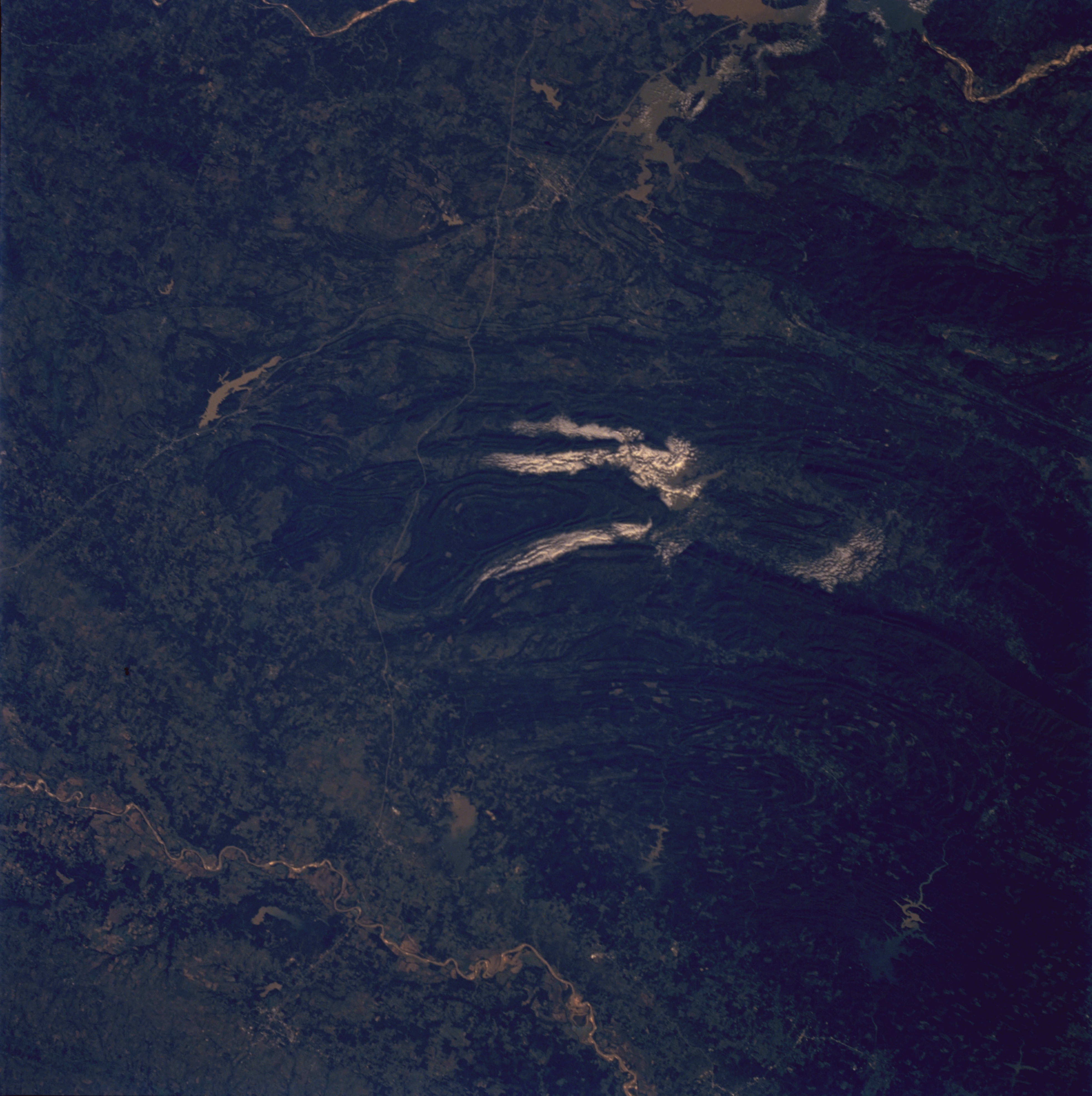 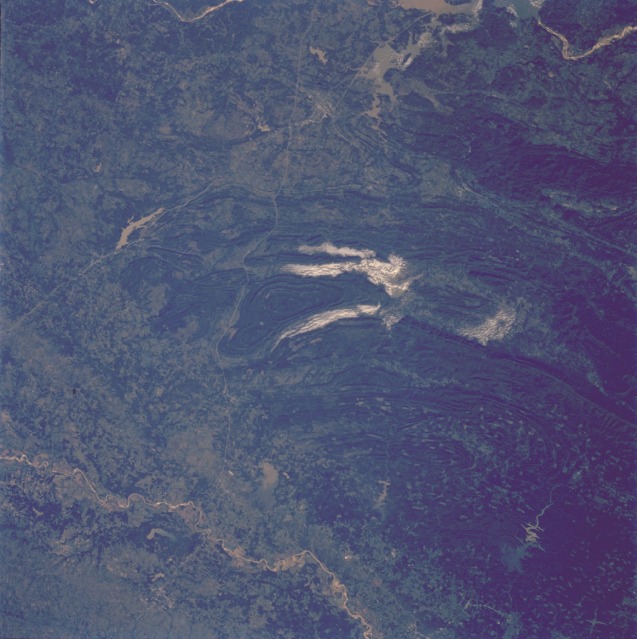 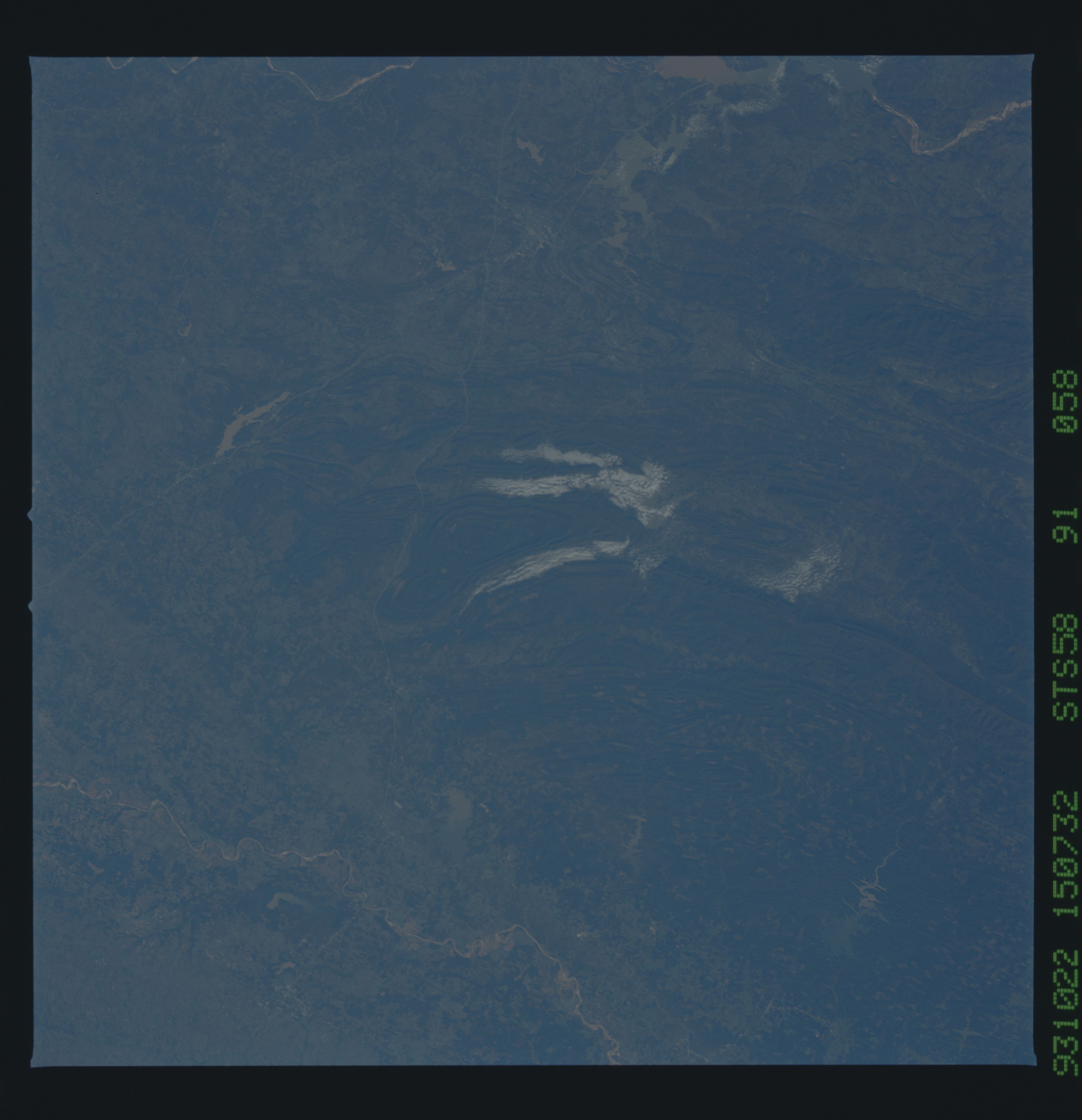 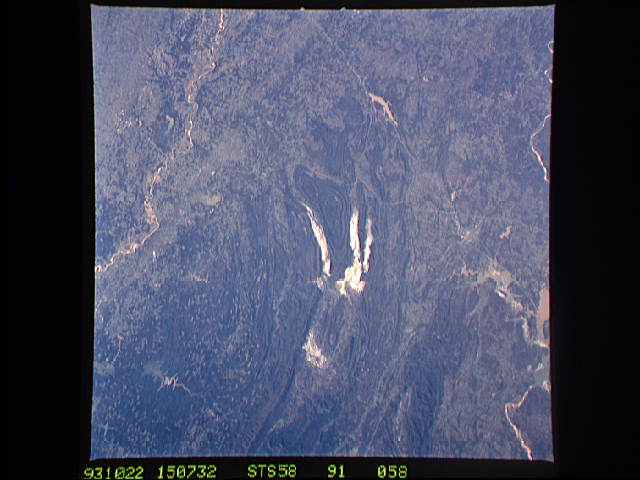 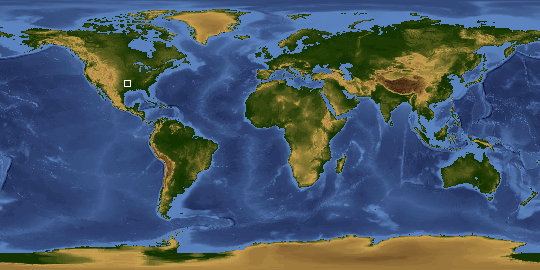 Other options available:
Download Packaged File
Download a Google Earth KML for this Image
View photo footprint information
Download a GeoTIFF for this photo
Image Caption: STS058-091-058 Ouachita Mountains, Southeastern Oklahoma, U.S.A. October 1993
The heavily forested western Ouachita Mountains depicted in this low-oblique photograph extend from the meandering Red River (Texas-Oklahoma border) near the southern edge of the photograph to the Arkansas River near the northern edge of the photograph. The Ouachita Mountains are a folded belt of many parallel ridges and valleys that closely resemble the ridge and valley regime of the Appalachian Mountains in the eastern United States. Most of the ridges range from 1000 to 2000 feet (300 to 600 meters) in elevation; their general east-west alignment has restricted north-south development, except in a few valleys. In addition to the impressive geologic terrain, some manmade features are quickly recognizable--the two linear north-south features are the Indian Nation Turnpike (easternmost highway) and U.S. Highway 69, which intersect south of McAlester, Oklahoma. The general location of McAlester, Oklahoma, and Paris, Texas, can be identified by studying the relationship of highways, rivers, and reservoirs. Several reservoirs north of the Red River are visible from west to east at approximately the same parallel--Hugo Lake, Pine Creek Lake, and Broken Bow Lake. Flowing into the northern end of each lake is sediment material (light tan), which results from numerous cleared areas of the forests immediately north of the three reservoirs. The large reservoir near the northern edge of the photograph is part of Lake Eufaula and the Canadian River, which eventually flows into the Arkansas River.

In this unusually clear view, the Ouachita Mountains of southeastern Oklahoma are framed on the north by Lake Eufaula on the South Canadian River, and on the south by the Red River. Clouds formed by upslope winds border both the north and south sides of the synclines (in a syncline the rock layers dip toward the center of the structure). Toward the west, densely forested mountains give way to gently rolling, less rocky terrain and a drier climate. The mountains centered on Broken Bow, in the lower right corner of the scene, display abundant timber clearcuts that are being regenerated.