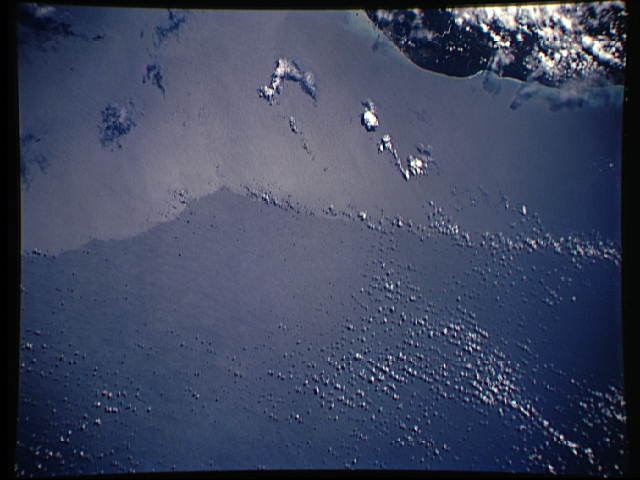 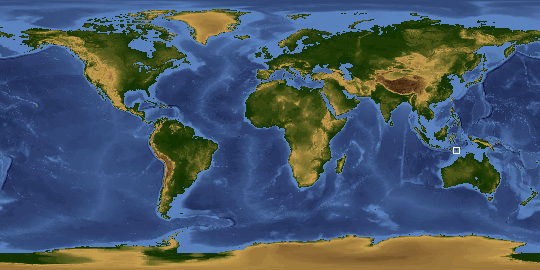 Other options available:
Download Packaged File
Download a Google Earth KML for this Image
View photo footprint information
Image Caption: Timor Sea. This sunglint photograph of the south coast of Timor and the Timor Sea (northwest of Darwin, Australia) shows a sharp boundary in sea surface temperature. The cooler water (nearer Timor) is smoother (and hence brighter) because of suppression of atmospheric turbulence; whereas the dark areas (speckled with clouds) are the rougher warmer water. The photo was taken on May 5, 1993, at 04:03:47 GMT.

STS-55 Earth observation taken from Columbia, Orbiter Vehicle (OV) 102, shows the Timor Sea along the south coast of Timor. The sunglint pattern shows a sharp boundary in sea surface temperature, with cooler water along the coast and warmer water offshore. The sunglint brightness reveals water surface roughness with bright indicating smooth water and dark representing rough water. Cooler water is smoother because it acts to stabilize the atmospheric boundary layer, while the warm water acts to destabilize the atmosphere. Another indication of water temperature is the cloud pattern. Advection within the atmosphere as a result of warming at the sea surface forms low-level clouds with the small, popcorn-like appearance seen in upper right corner of the photograph. The cool water, on the other hand, is relatively free of the popcorn-like clouds. The distribution of the clouds indicates that the wind is blowing toward the upper right corner of the photograph. Also note the line of low-level