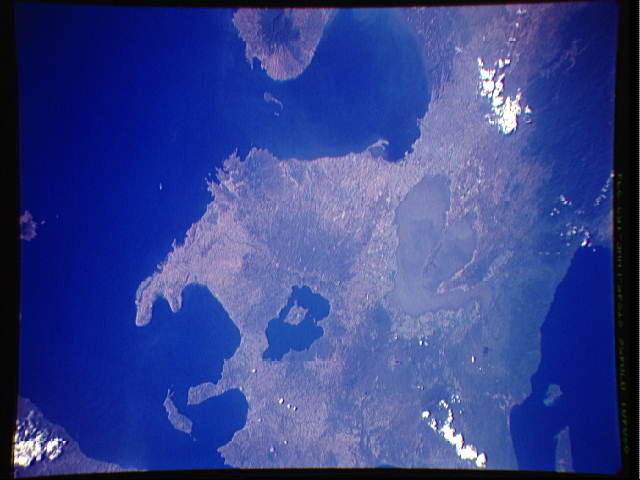 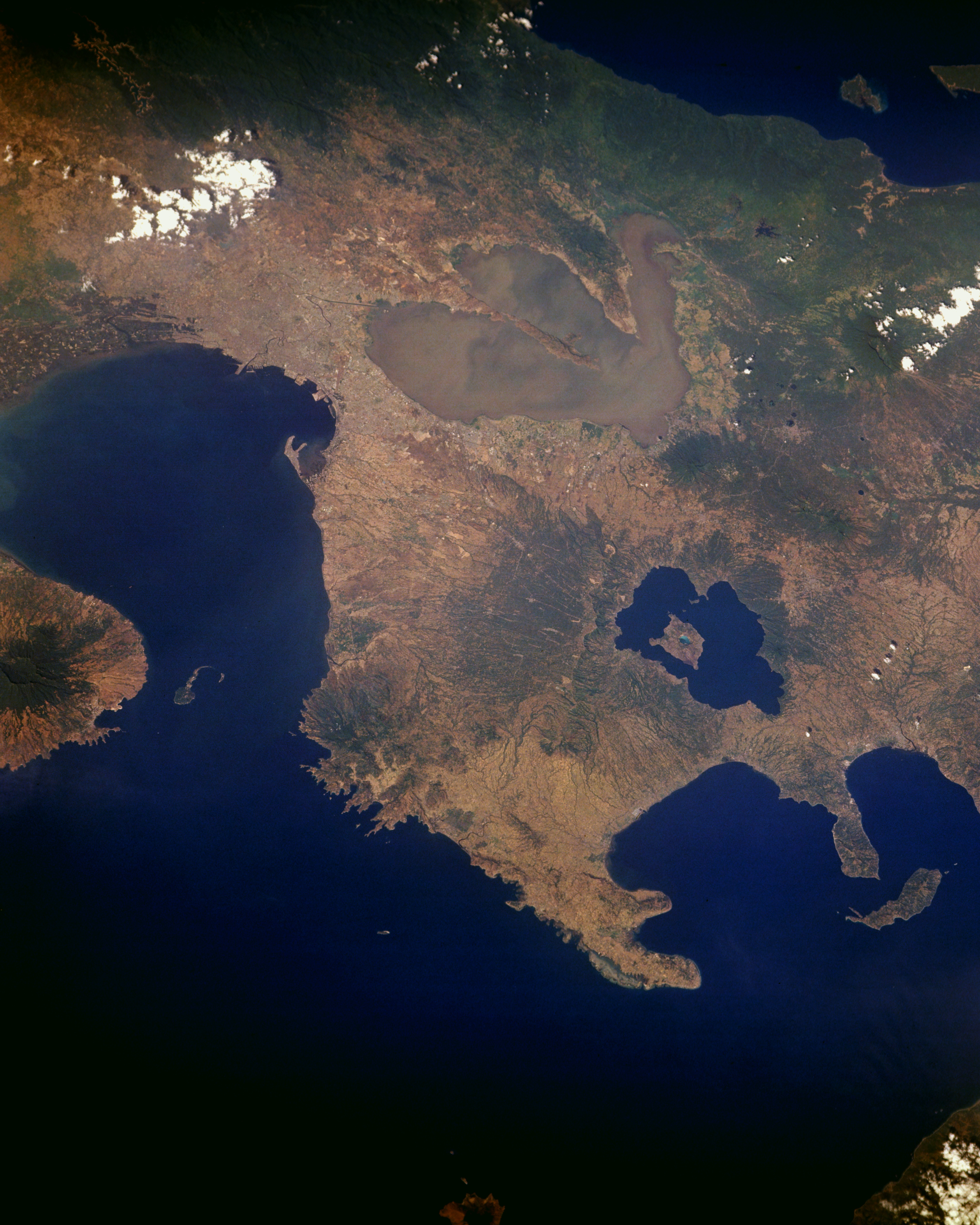 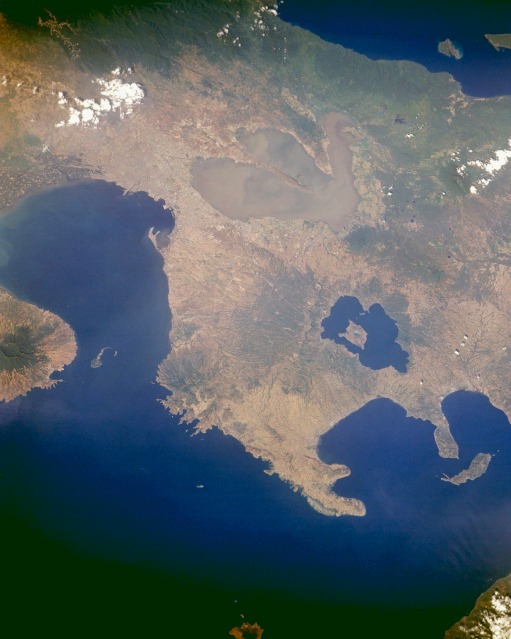 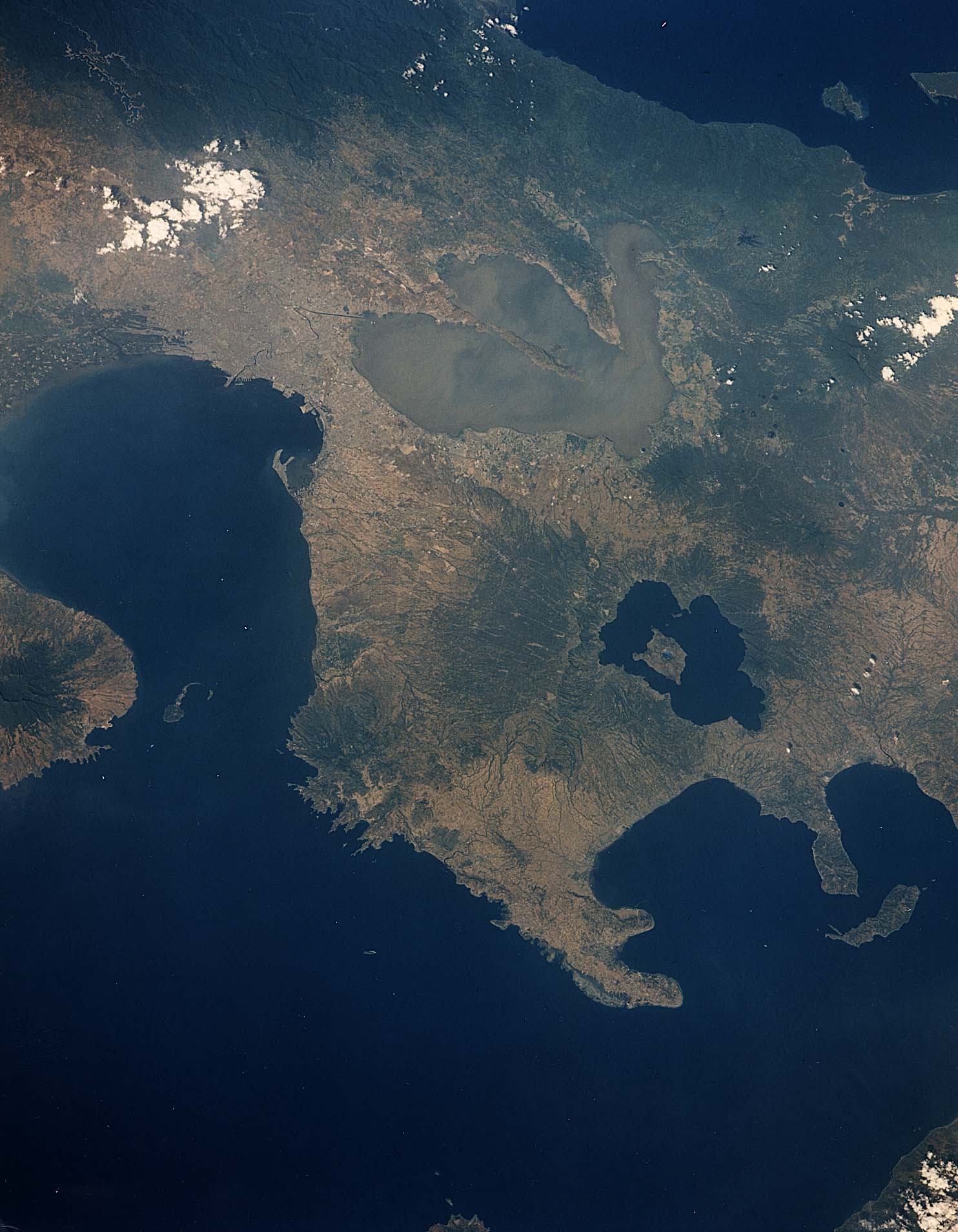 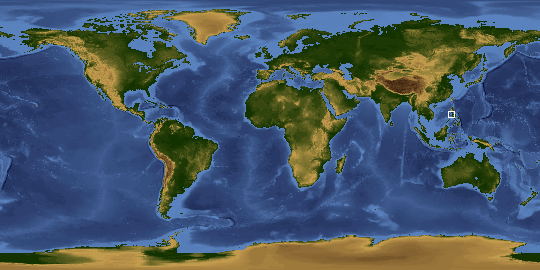 Other options available:
Download Packaged File
Download a Google Earth KML for this Image
View photo footprint information
Download a GeoTIFF for this photo
Image Caption: STS045-152-274 Manila and Taal Volcano, Philippines March 1992
Trilobed Laguna de Bay, the largest lake in the Philippines, is visible near the center of this east-looking, low-oblique photograph of central Luzon, Philippines. The lake is more than 32 miles (51 kilometers) long and covers 344 square miles (891 square kilometers). Its outlet, the Pasig River, exits at the northwest corner of the lake, flows westward through Manila, and empties into Manila Bay. Situated between Laguna de Bay and Manila Bay is the capital and chief port of the Philippines, Manila. The city has a humid tropical climate, with an average temperature of 80 degrees Fahrenheit (26 degrees Celsius). The dry season from March to June is followed by heavy rains, including typhoons, until mid- to late November. Metropolitan Manila covers 246 square miles (636 square kilometers) and has a population of more than 7.5 million. Major industries include iron and steel, plywood and veneer, cement, leather, pharmaceuticals, paper products, fishing, tourism, textiles, and shipyards and ship repair. Manila Bay, one of the finest harbors in Southeast Asia, has a predominately level shoreline; good protection; huge anchorage space; and unobstructed, deep water. From a width of 11 miles (18 kilometers) at its entrance, the bay broadens to 35 miles (56 kilometers) and reaches inland for 32 miles (51 kilometers). The fortified island of Corregidor is situated at the entrance to the bay, less that 2 miles (3 kilometers) from the Bataan Peninsula. Although Manila Bay reaches depths of 125 feet (38 meters), its upper margins near Manila are shallow, largely because of silting. The port of Manila needs constant dredging to permit large ships to berth at its piers. South of Laguna de Bay are the dark blue waters of Taal Lake, a filled caldera that surrounds Volcano Island, 14 miles (23 kilometers) in circumference. Volcano Island is home to Taal Volcano, a stratovolcano 984 feet (300 meters) high with a crater more than 1 mile (2 kilometers) wide that is sometimes filled with water. The volcano, with more than 30 eruptions since 1572, last erupted in 1977, although the last severe eruption occurred in 1968.