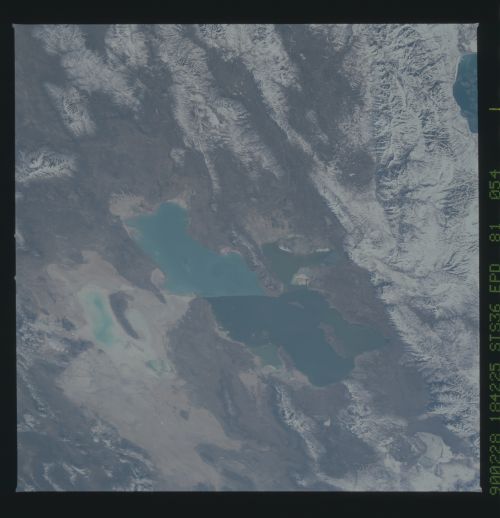 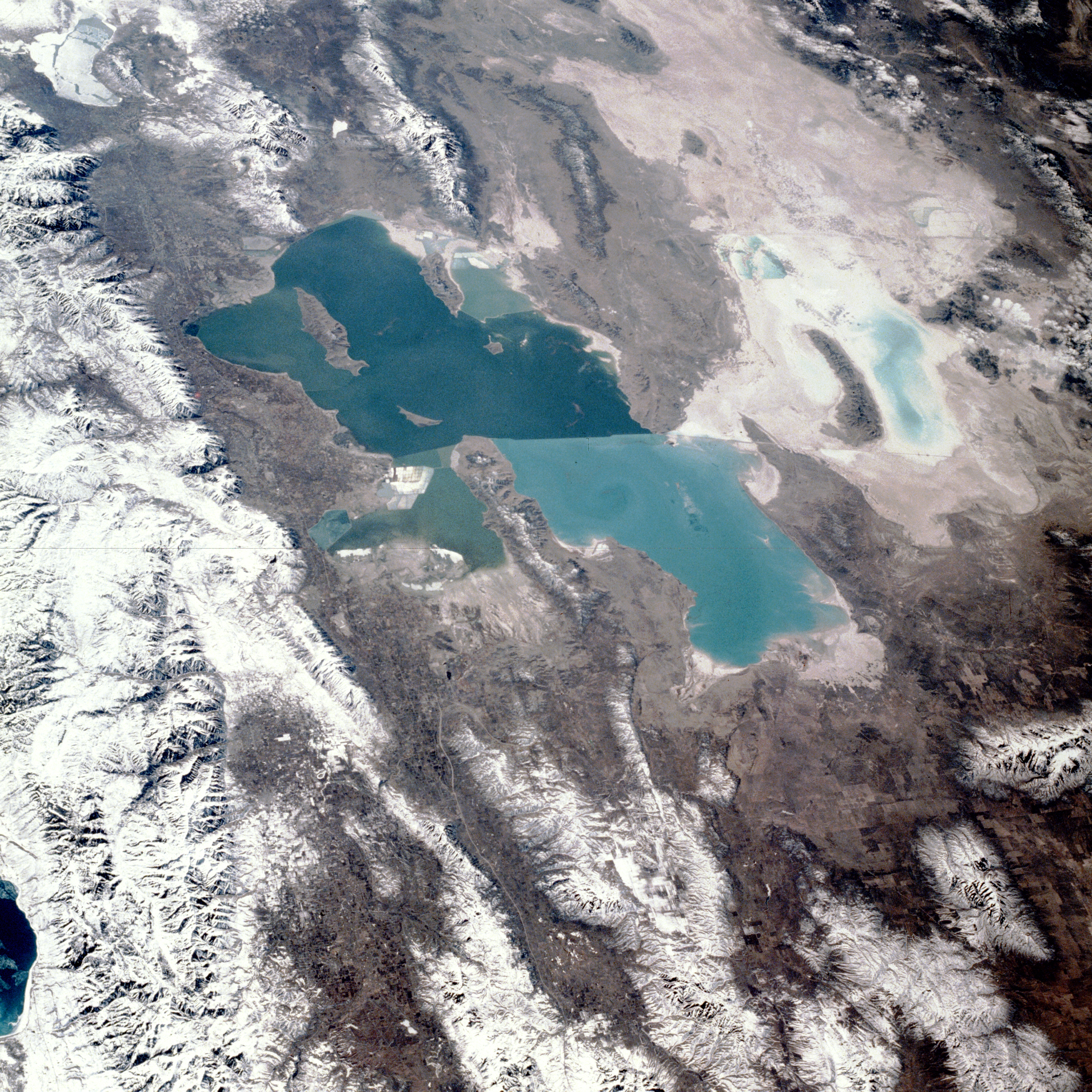 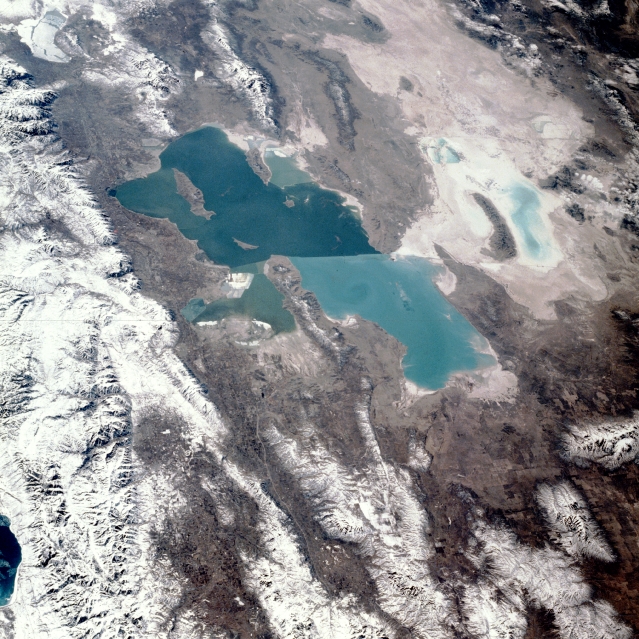 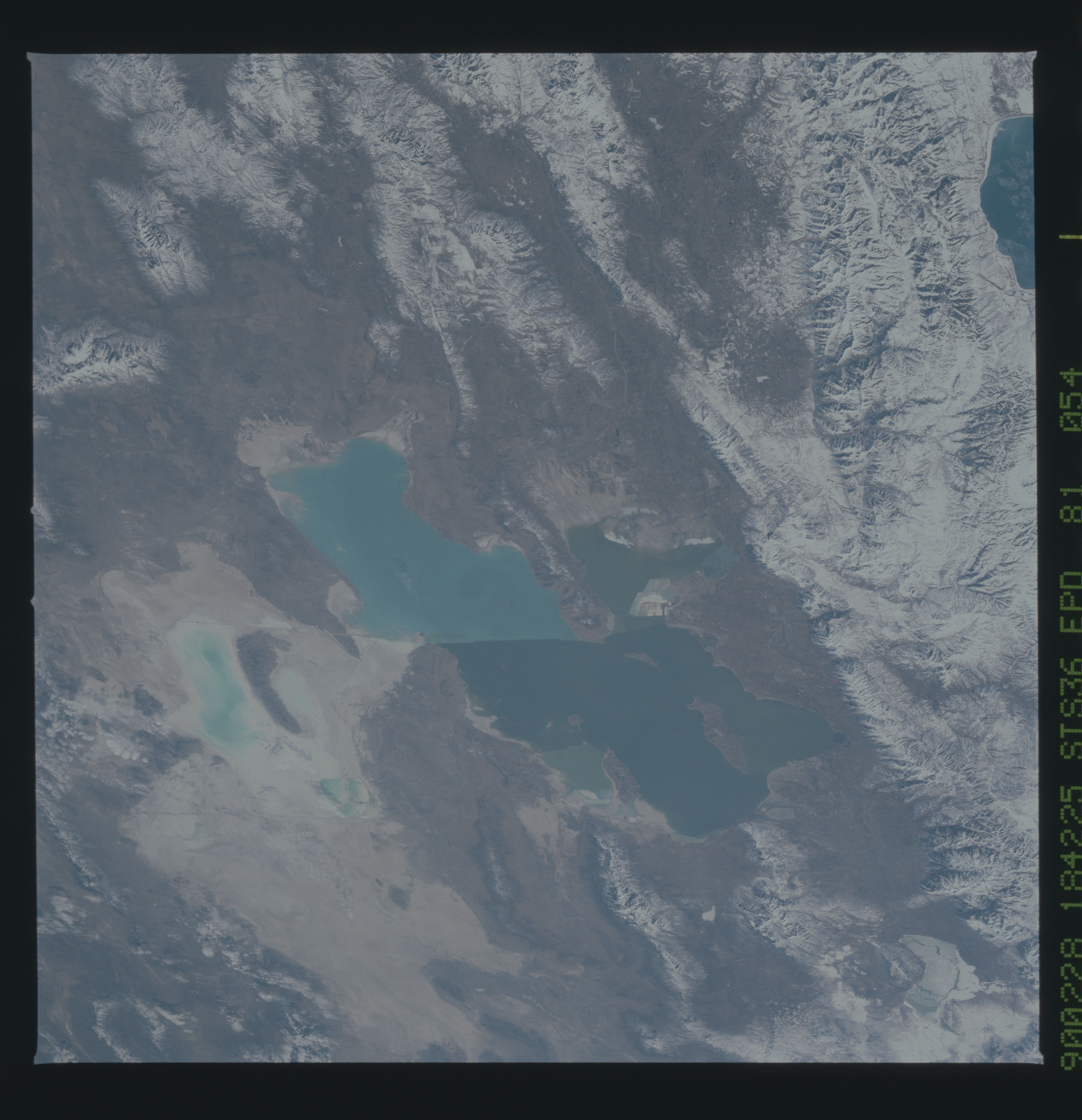 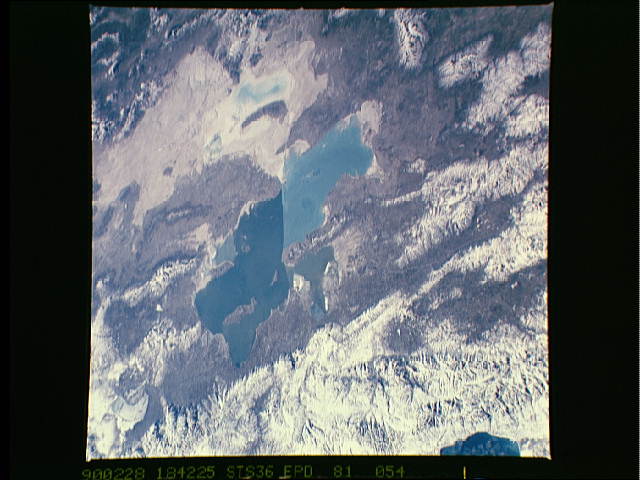 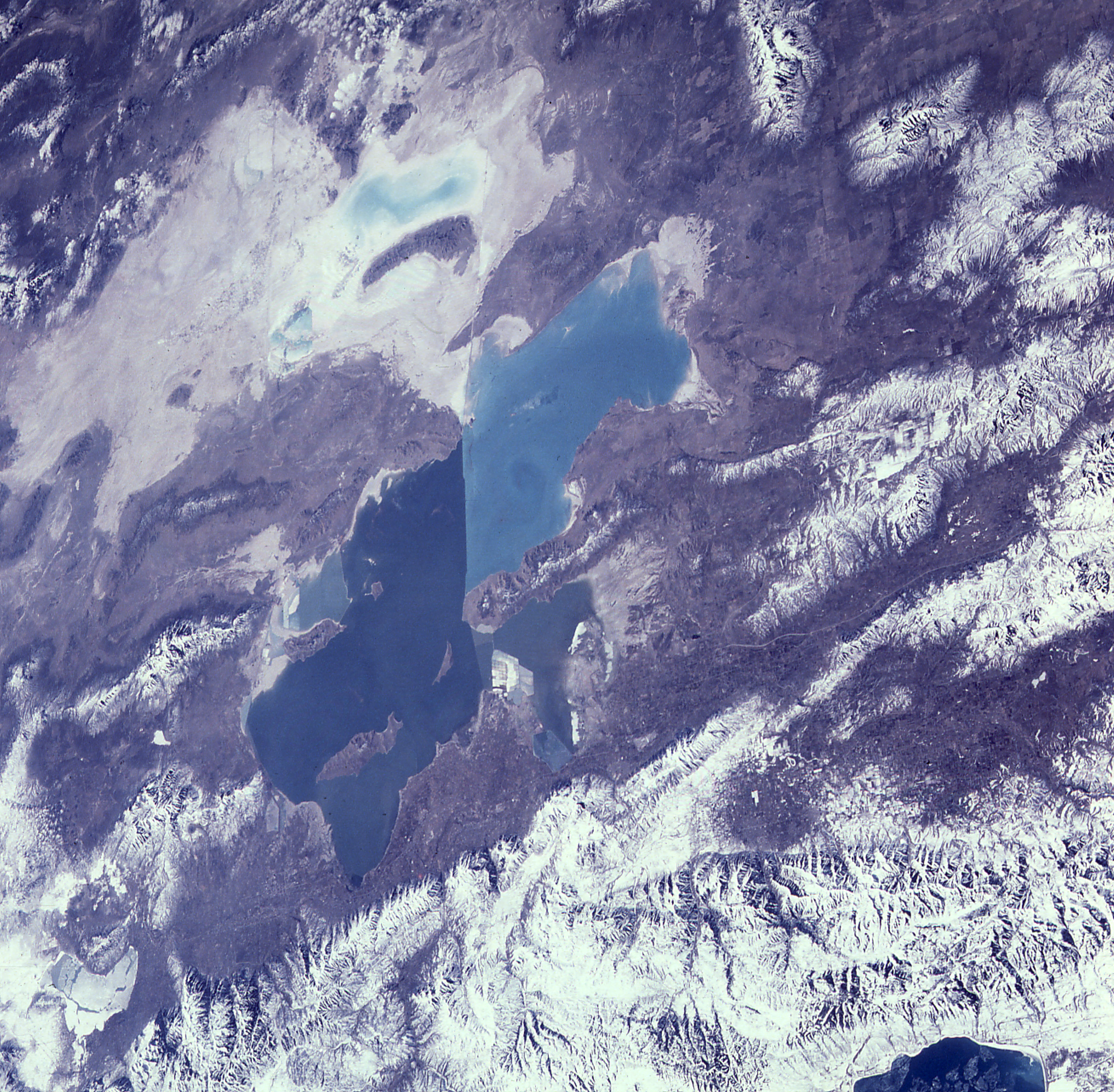 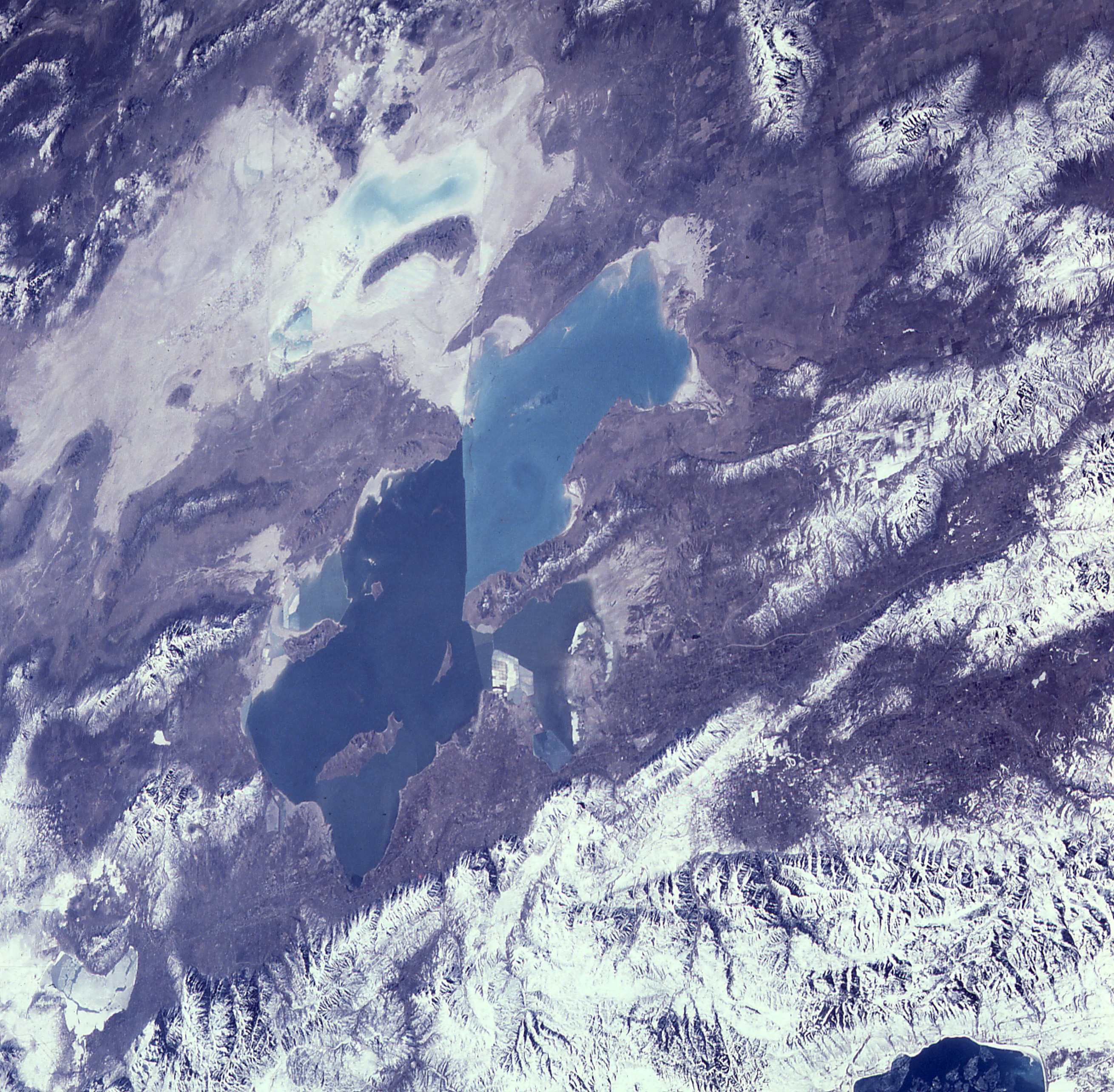 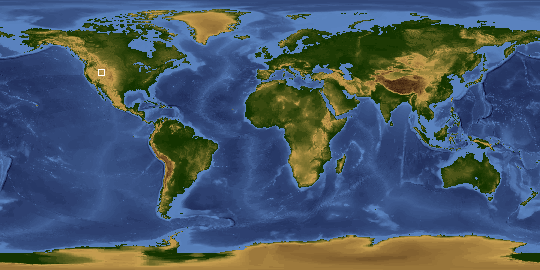 Other options available:
Download Packaged File
Download a Google Earth KML for this Image
View photo footprint information
Image Caption: STS036-081-054 Great Salt Lake, Utah, U.S.A. February 1990
The turquoise Great Salt Lake of northern Utah, the largest salt lake in North America, is shown in this south-southwest-looking, low-oblique photograph. Winter snows cover the north-south trending Wasatch Range (located east of the lake) and smaller ranges scattered throughout the view. The western half of Bear Lake on the Utah-Idaho border can be seen northeast of the Great Salt Lake. The lake, 83 miles (134 kilometers) long and nearly 51 miles (82 kilometers) wide, is divided by a railroad bed (visible near the center of the lake) that traverses the lake east-west near its center. The railroad bed restricts the flow of water from one part of the lake to the other. The difference in colors (dark blue south of the railroad, turquoise north of the railroad) is due to differences in depth and salinity. The average depth of the northern portion of the lake is 13 feet (4 meters), but depths can reach 35 feet (11 meters) in the southern portion of the lake. The lake is fed by three rivers coming from the Wasatch Range to the east (not all visible in photograph), but it has no outlet. The Great Salt Lake varies in size and depth from year to year depending on rainfall. Above-normal precipitation has caused standing water or ponds to appear (visible in the photograph) in the Great Salt Desert west of the lake. The desert was part of prehistoric Lake Bonneville, which was over 1000 feet (300 meters) deep and covered an extensive area of the Great Basin of western Utah and eastern Nevada.

As seen from space, the Great Salt Lake, Utah, USA (41.5N, 112.5W) appears as two separate bodies of water with a narrow divider in the middle. At the turn of the century, a railroad bridge without culverts, was built across the lake and ever since, the water and salinity levels have been uneqal on either side. Fed by snowmelt from the nearby Wasatch Mountains, the lake in recent years has had record high water levels, threatening to flood the local areas.