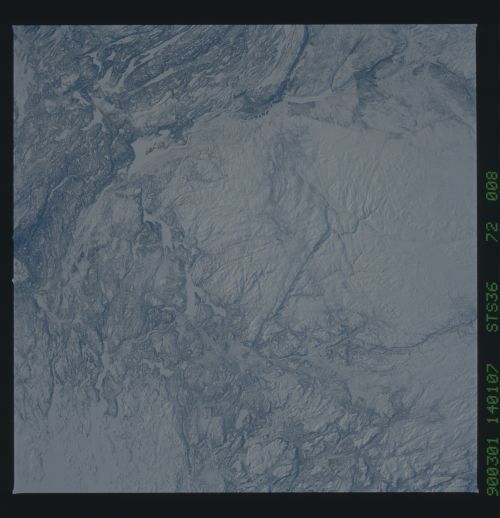 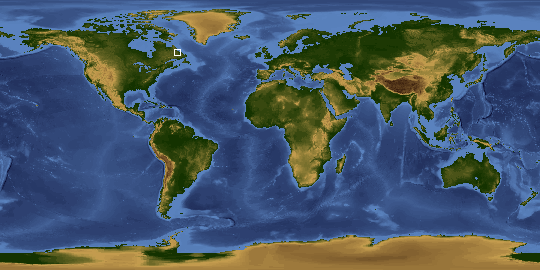 Other options available:
Download Packaged File
Download a Google Earth KML for this Image
View photo footprint information
Image Caption:
S36-72-008: Harp Lake, Labrador (55.1! N, 61 .6! W) The round,
snow-covered area in the center of the photograph is a low moun-
tain range made up of (roughly) 1-billion-year-old anorthosite.
Anorthosite is the same rock which makes up the lunar highlands.
It is a relatively resistant and uniform rock type, so it weath-
ers uniformly and often forms topographic highs. A glacially
carved, fault- controlled valley containing a lake (Harp Lake)
runs northeast-southwest through the center of the anorthosite.

The east-west linear structures, highlighted by lakes to the
south of the anorthosite mountains, are metamorphosed sediments
into which the anorthosite was intruded. The choppy terrain east
of Harp Lake is made of very old (3.1Jbillion years) rocks, some
of the oldest in the world. They are complexly folded and con-
tain remnants of very ancient ocean crust from the earliest ep-
isodes of continental collisions on the Earth. Because the re-
gion is largely tundra, the rocks are well exposed (in the sum-
mer) and are important for understanding the Earth's early histo-
ry.

This is a good slide to illustrate how rock type controls surface
topography.