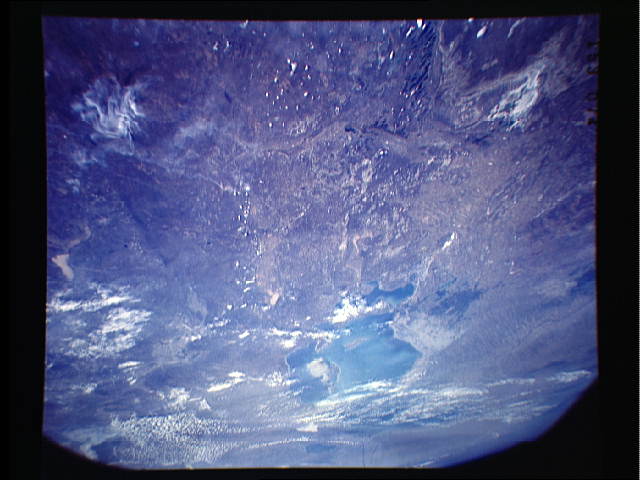 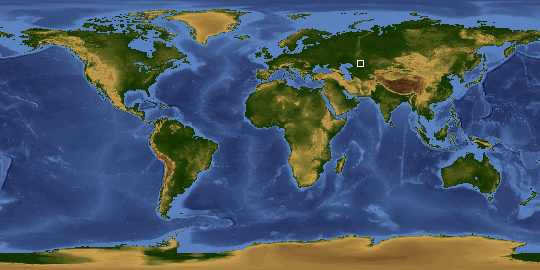 The STS-28 crew photographed the Aral' Sea during their mission
in August 1989. The photograph to the left is a south-looking
oblique view that shows dust (probably salt and silt) blowing
from the eastern shore (1) out over the sea and from Vozrozhdeni-
ya Island (2) over the western shoreline. The top near-vertical
view depicts the older shorelines (3) along the northwestern
coast and Barsa-Kel'mes Island. The land area of the island con-
tinues to grow as water levels in the sea decrease. (S28-153-
074; S28-91-009, 010)

STS028-153-074. [Geocarto 5 (1990>2): 70] The Soviets now report
that the Aral Sea has dropped in level so far as to result in its
separating into two disjunct basins. The evidence here is not
unequivocal, in that a passage seems to remain between the two in
this August 1989 photograph from STS-28. Certainly, a lowered
water level is evident in this frame compared to the 1985 frame
above; and it is certain that the old fishing port of Aral'sk, on
the north side, is now approximately 80 km from the water of the
Aral Sea, a rather amazing contraction of water area for a 20-
year period.