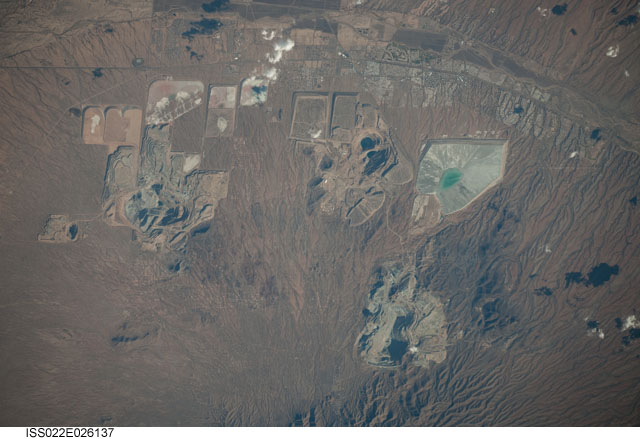 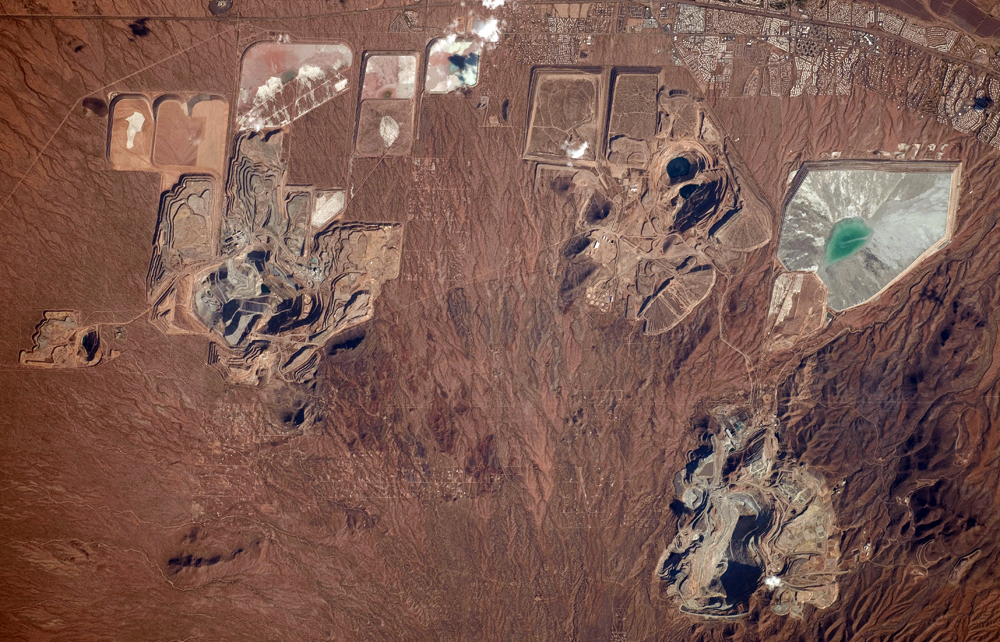 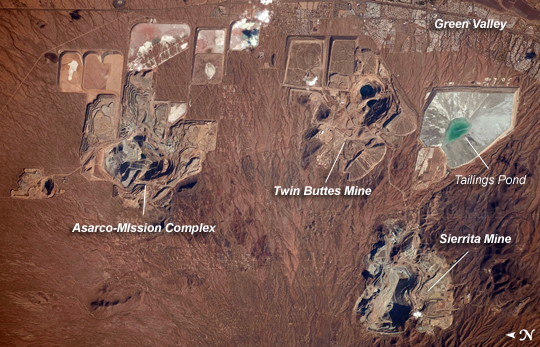 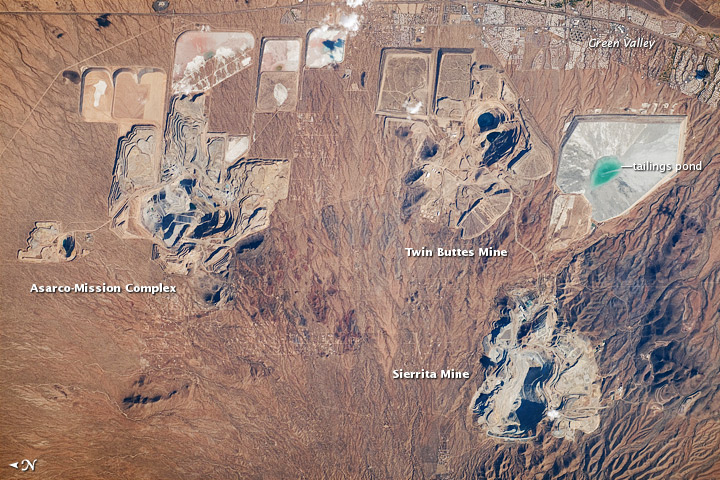 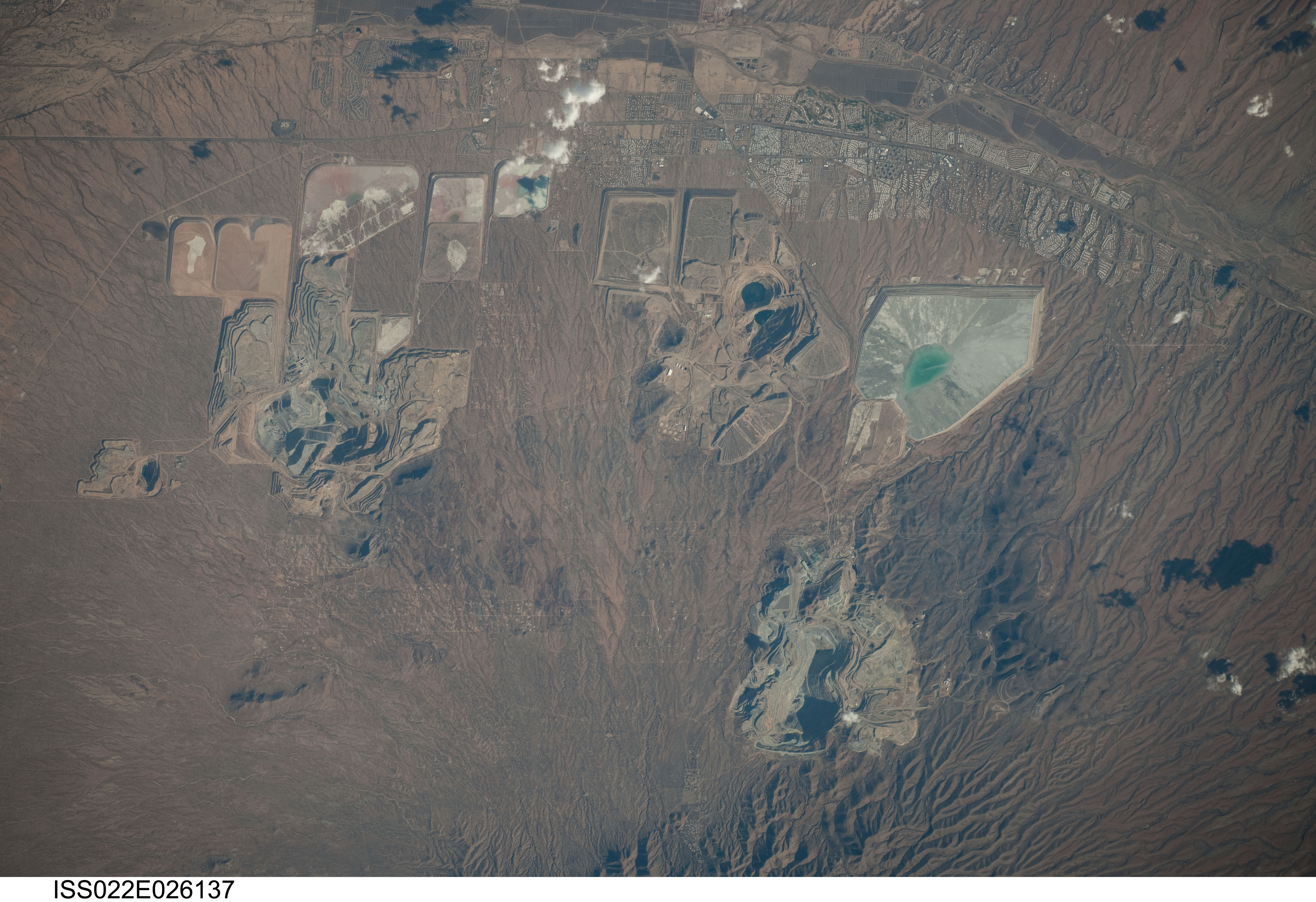 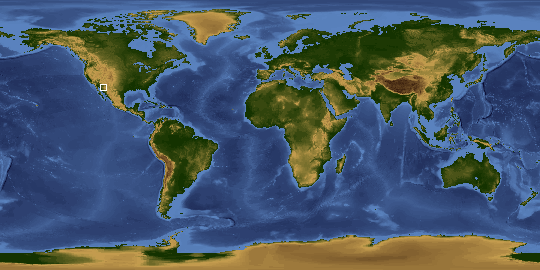 Copper is a good conductor of electricity and heat, and it is a vital element of virtually all modern electronic devices. Arizona is the United States' largest source of copper, primarily mined from a type of ore body known as porphyry copper deposits. The most common approach to extracting metal-bearing ore from a porphyry copper deposit is by open-pit mining, although such mines also typically include some underground activities.

This astronaut photograph illustrates three open-pit mines located west-northwest of the town of Green Valley, Arizona. While the mines appear to be close to each other, each exploits a separate porphyry copper deposit. A porphyry copper deposit forms when crystal-rich magma moves upwards through pre-existing rock layers. As the magma cools and crystallizes, it forms an igneous rock with large crystals embedded in a fine-grained matrix, known as porphyry. Hot fluids circulate through the magma and surrounding rocks via fractures, depositing copper-bearing and other minerals in characteristic spatial patterns that signal the nature of the ore body to a geologist.

The mine pits are recognizable by the concentric lines of benches cut into the pit sides. The benches allow equipment and personnel access to the fresh ore (gray) exposed at the bottom of the excavation. Water may also pool at the bottom of inactive pits, such as in the Twin Buttes Mine at image upper right (black areas). The open pit areas are surrounded by an array of sculpted tailings ponds and mine dump areas; these receive mine waste rock for storage and later leaching for further recovery of metals. The green color of the water in the tailings pond at image right is likely due to the presence of leached metals.

The Asarco-Mission complex (image left) is an active producer of copper and molybdenum (important in making steel and other metal alloys), processing approximately 53,700 tons of ore per day (as of 2008). The Twin Buttes Mine (image top right), also a producer of copper and molybdenum, was closed in 1994 but was recently purchased by a new owner (Freeport-McMoRan Copper & Gold) and may reopen. The Sierrita Mine at image lower right (also owned by Freeport-McMoRan Copper & Gold) produces copper, molybdenum, and the rare metal rhenium. Rhenium is used to make high-temperature alloys for jet engine parts and in high-octane, lead-free gasoline. This mine can process over 115,000 tons of ore per day (as of 2007).