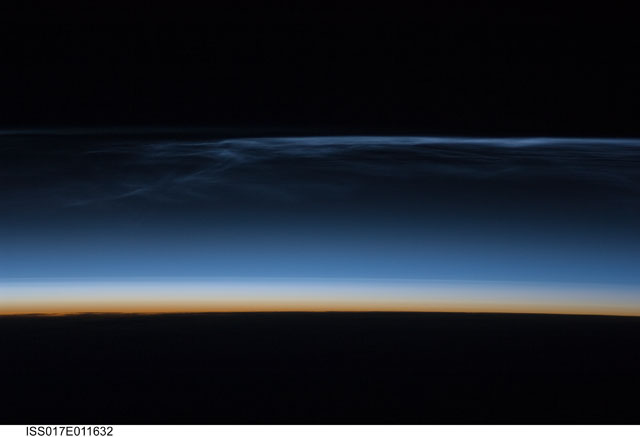 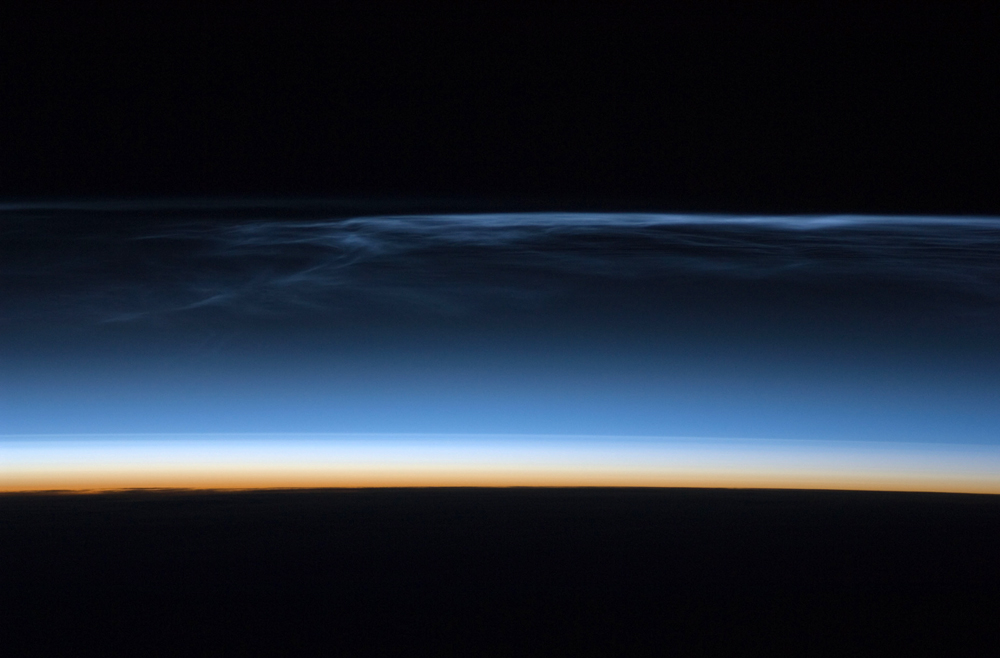 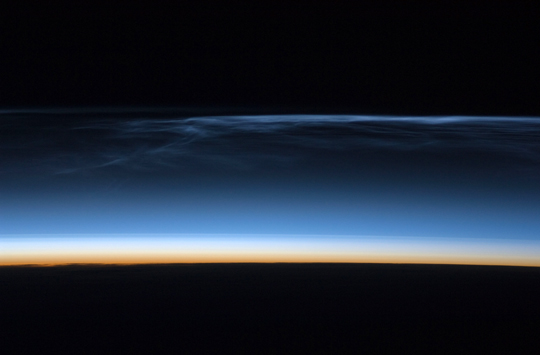 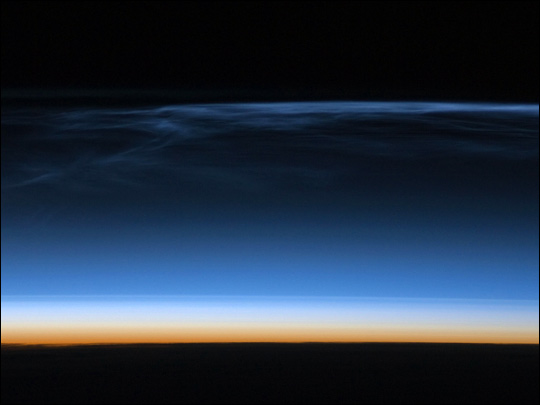 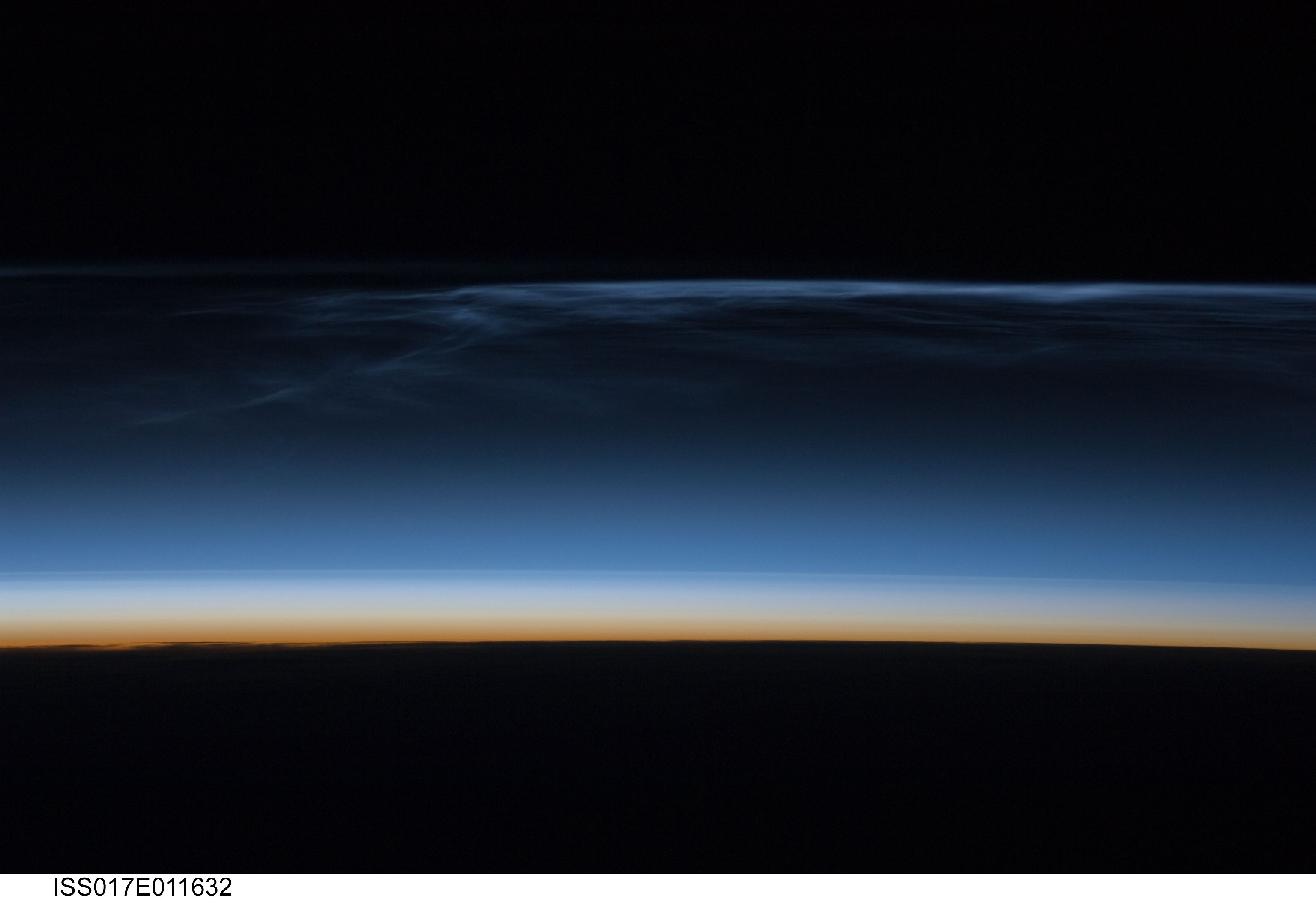 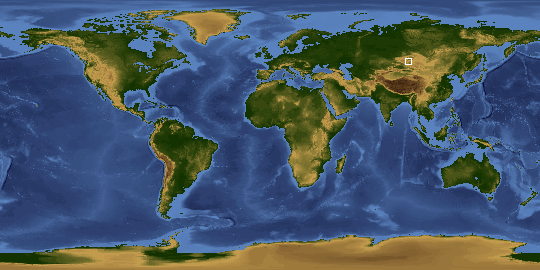 Polar mesospheric clouds (also known as noctilucent, or "night-shining" clouds) are transient, upper atmospheric phenomena that are usually observed in the summer months at high latitudes (greater than 50 degrees) of both the Northern and Southern Hemispheres. They appear bright and cloudlike while in deep twilight. They are illuminated by sunlight when the lower layers of the atmosphere are in the darkness of Earth's shadow.

This astronaut photograph of polar mesospheric clouds was acquired at an altitude of just over 200 miles (about 321 kilometers) in the pre-dawn hours (18:24:01 Greenwich Mean Time) on July 22, 2008, as the International Space Station was passing over western Mongolia in central Asia. The dark horizon of the Earth appears at the bottom of the image, with some layers of the lower atmosphere already illuminated by the rising Sun. The higher, bluish-colored clouds look much like wispy cirrus clouds, which can be found as high as 60,000 feet (18 kilometers) in the atmosphere. However noctilucent clouds, as seen here, are observed in the mesosphere at altitudes of 250,000 to 280,000 feet (about 76 to 85 kilometers).

Astronaut observations of polar mesospheric clouds over northern Asia in June and July are not uncommon. The crew of the International Space Station acquired this image and many others in support of research for the International Polar Year. Some researchers link increased observations of these clouds to changes in global climate. Polar mesospheric clouds have been the subject of extensive observation and research from space by the Swedish satellite Odin, launched in 2001, and more recently by NASA's Aeronomy of Ice in the Mesosphere (AIM) satellite system beginning in 2007.