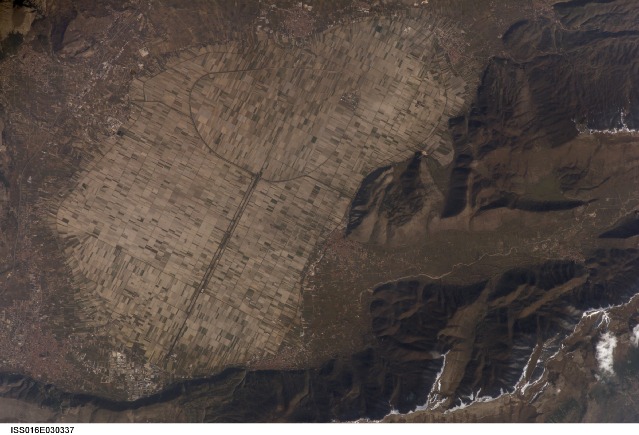 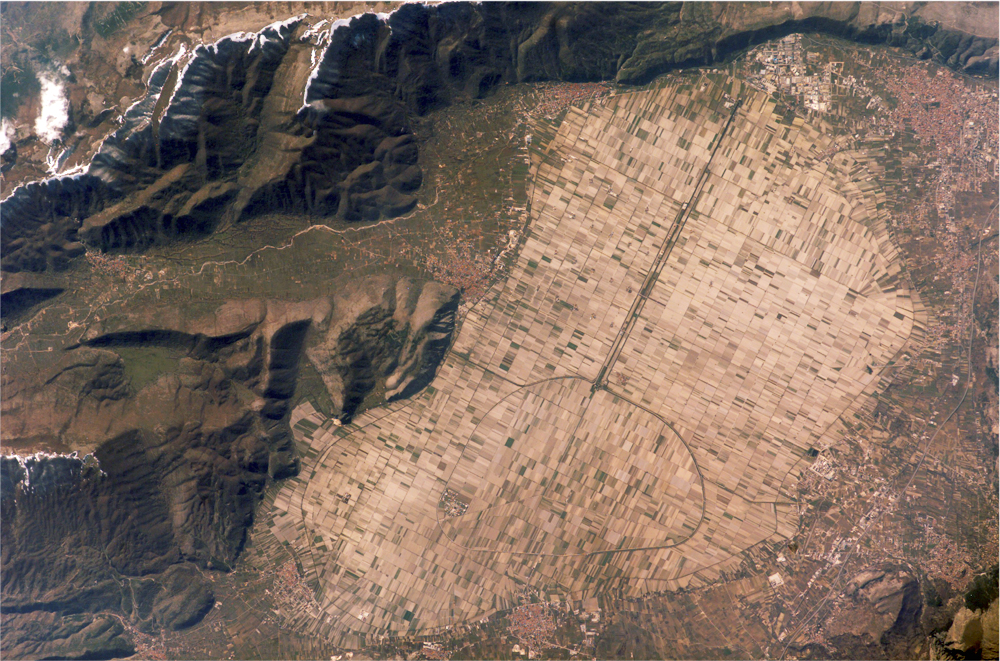 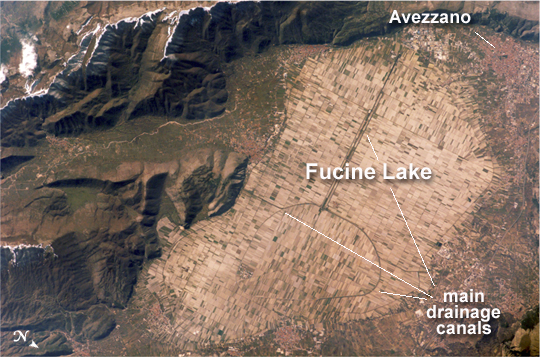 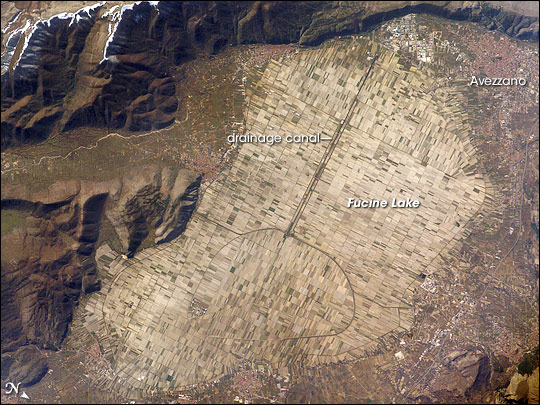 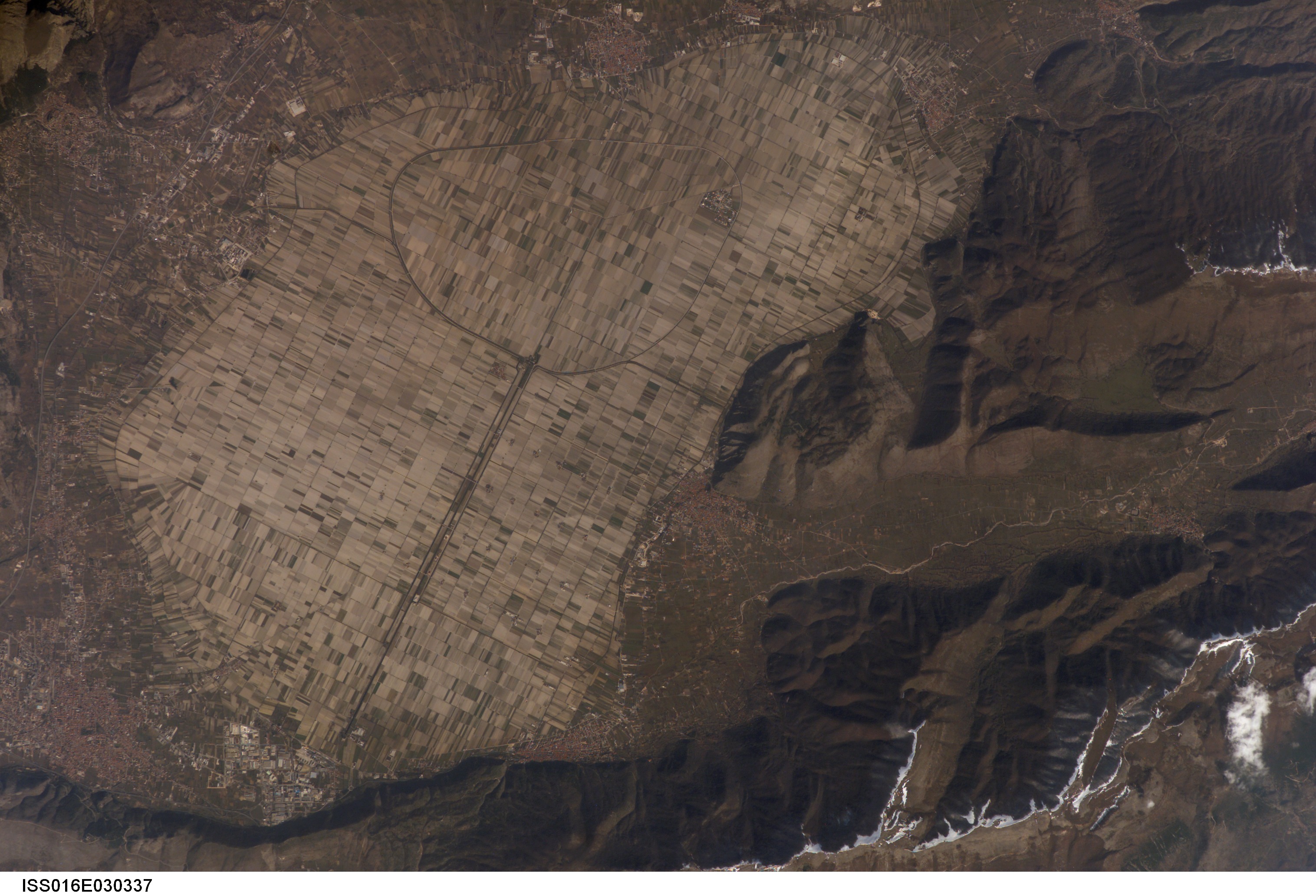 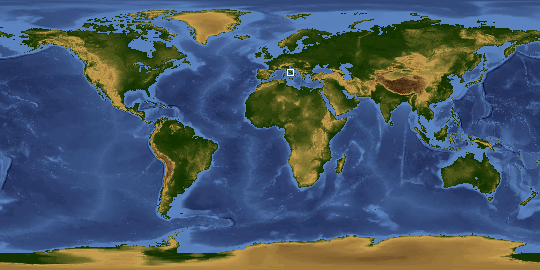 The light tan oval in this image is the floor of a lake in central Italy that has been drained by a tunnel dug through the surrounding hills. Numerous rectangular fields occupy the former lake bottom--now one of the most fertile regions of Italy. The area is still referred to as "Fucine Lake," even though the lake has been dry for nearly 150 years.

The town of Avezzano (top right), near the drainage outlet of the basin, lies 80 kilometers east of Rome. The "circumference road" runs around the edge of the former lake; it roughly follows the boundary between green, vegetated fields around the basin and tan fallow fields within. This recent astronaut photograph shows a dusting of snow along mountain ridges to the south (upper and lower left).

The basin of Fucine Lake has no natural outlet. Consequently the level of the original lake fluctuated widely with any higher-than-average rainfall. In Roman times, this variability caused flooding of the fishing communities around the lake. (Some of these towns, with their distinctive red tile roofs, are located around the margin of the lake floor.) Emperors Claudius and Hadrian achieved limited draining of the original lake--to control both flooding and malaria--by digging and then expanding a tunnel through the hills near Avezzano at the top of the image. Claudius used 30,000 workers over a span of ten years to dig the 5.6-kilometer-long tunnel. This engineering work reduced the size of the lake from an original area of about 140 square kilometers to about 57 square kilometers.

After the Roman Empire collapsed and maintenance failed, the tunnel was blocked up with vegetation and sediment. An earthquake--possibly the same event that damaged the Coliseum, somewhat before 508 CE--dropped the lake bottom by 30-35 centimeters. Drainage slowed, and the lake expanded; water filled the basin for the next 1,000 years. A serious draining effort was commissioned by Prince Alessandro Torlonia in 1862. That effort achieved complete emptying of the lake, giving it the modern appearance.