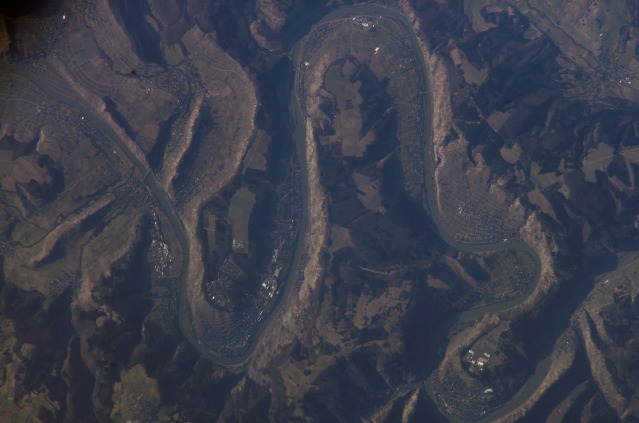 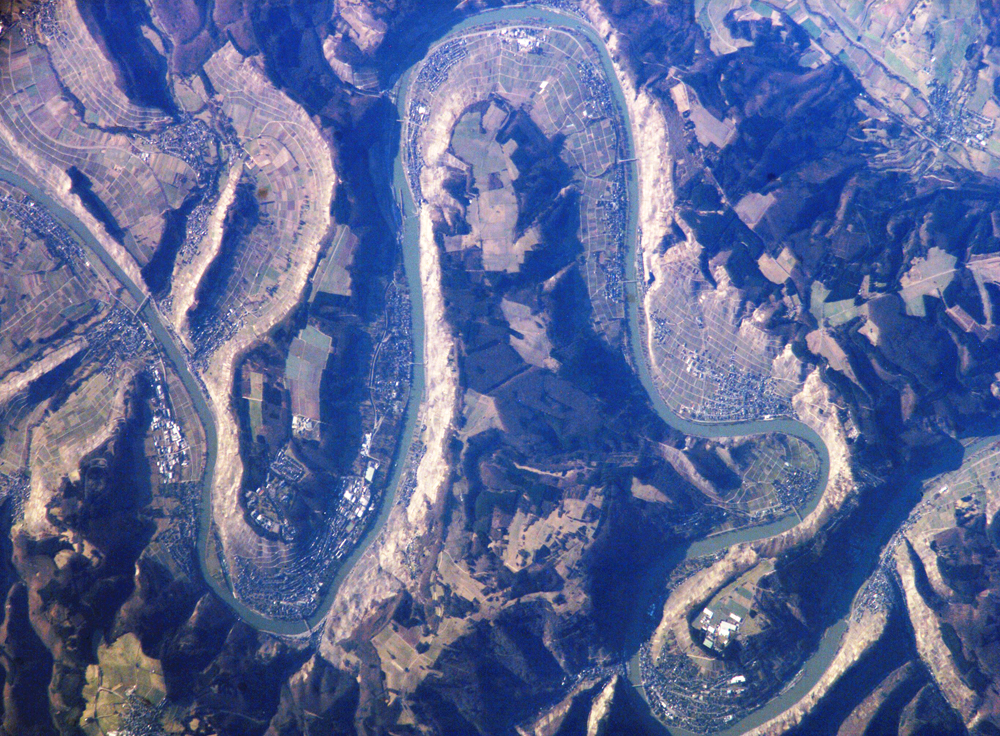 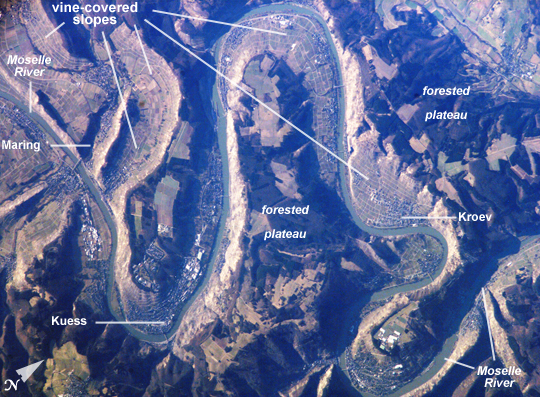 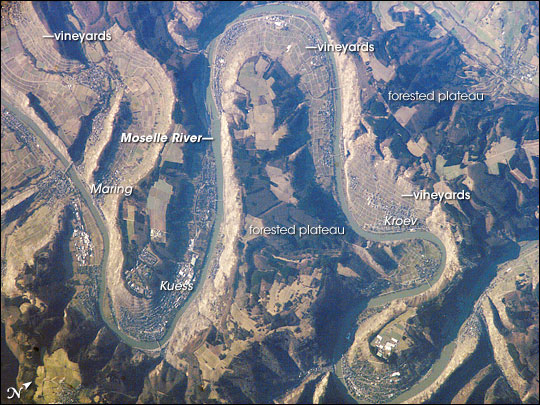 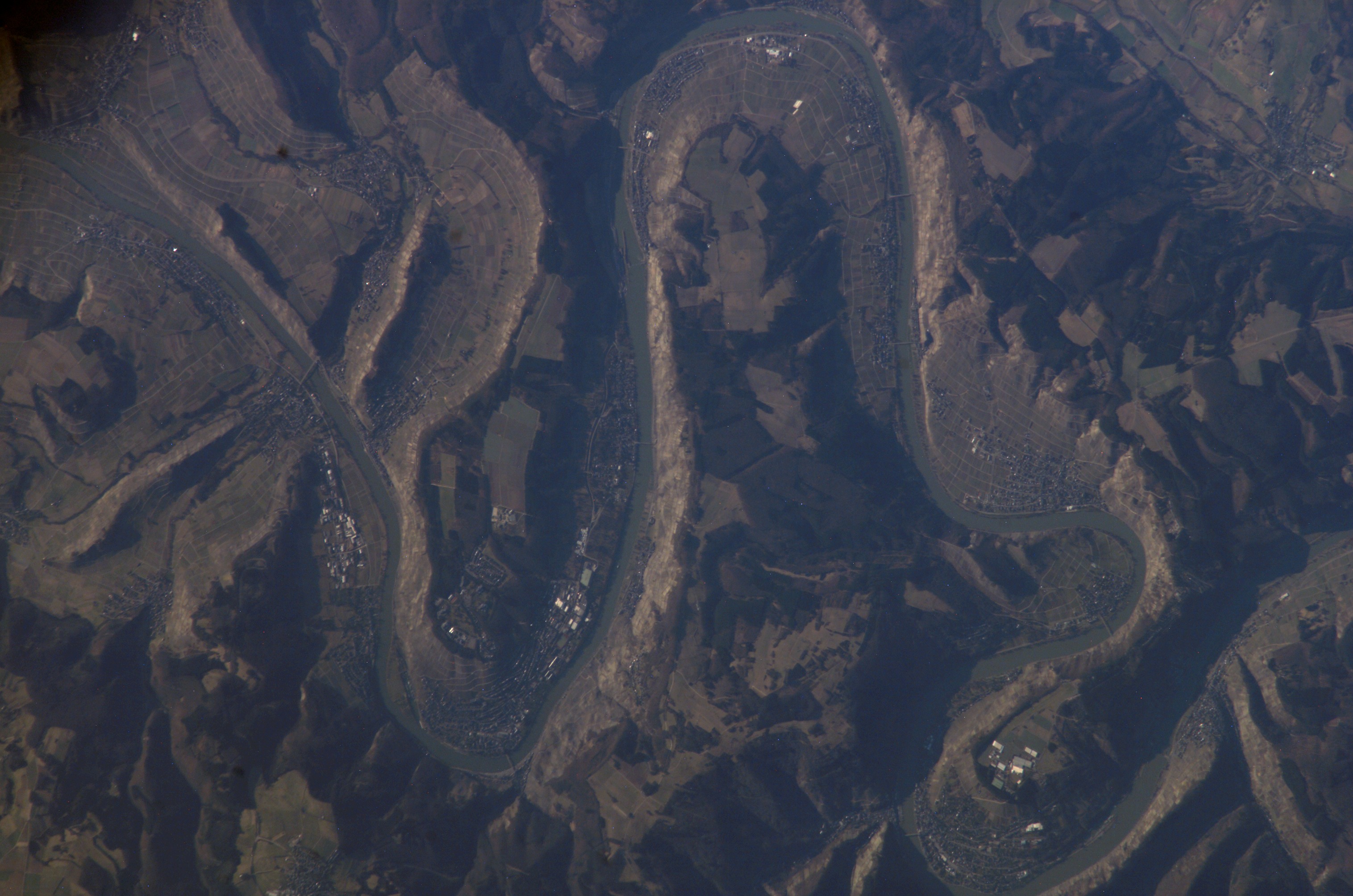 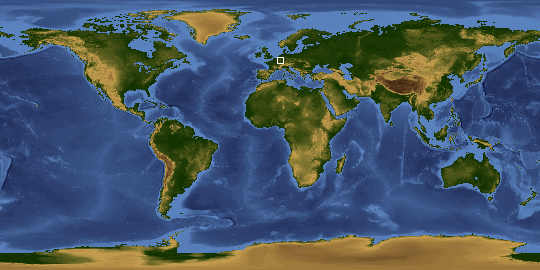 The Moselle (Mosel in German) is the best known of the 13 German wine-growing regions. The beautiful scenery of this part of the Moselle makes it a popular tourist destination. The white Riesling grape produces some of the best wines in this cool region of northern Europe. Riesling vines represent almost 60% of the vineyards in the Middle Moselle Valley shown here.

This detailed image (width covers a distance of 14.5 kilometers, or about 9 miles) shows the winding Moselle River flowing north (left to right). The river has cut a gorge more than 300 meters (984 feet) deep into a relatively flat plateau. The plateau is covered mainly in dark green forests, with some large agricultural fields. Because this is one of the coolest places in Europe where grape vines grow, the warmer microclimates that occur in the valleys below the exposed and higher plateau are key to growing vines.

Within the narrow and very steep valley, those slopes which face south and west are best for grapes. The north-facing slopes not only receive less direct sunshine, but the deep shadows of the canyon walls fall on them sooner in the day. These shadows are visible on the canyon wall opposite Kroev and elsewhere, where they make the river difficult to see. The vine-covered slopes, with very small plot sizes, appear as light grays and light greens along most of the gorge slopes. In this view, slopes around the villages of Kroev, Kuess, and Maring enjoy the best south-facing aspect.

Available sunlight is so limited here that even the reflected light from the river surface is known to help the vines, an effect that also favors south-facing slopes. The landscape character has also affected wine prices. Less-favorable slopes have been planted with hardier grapes of lower quality. This in turn has sometimes reduced prices somewhat for all Moselle wines.

Many slopes are so steep that the grapes cannot be harvested mechanically, which makes these vines very labor intensive and potentially hazardous for workers. The village of Bremm just outside the picture at top right, has the steepest documented vineyard in the world, with vines growing on a 65-degree slope.