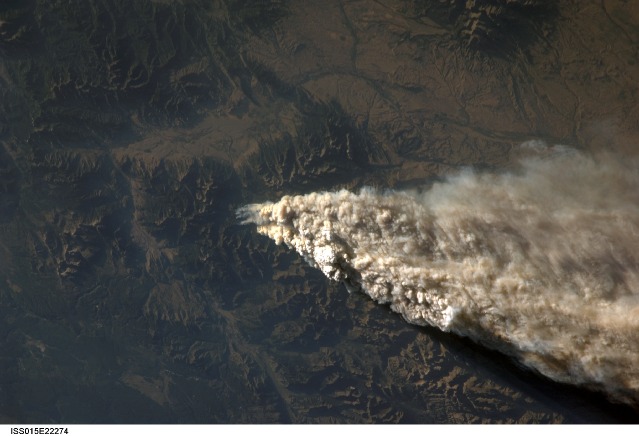 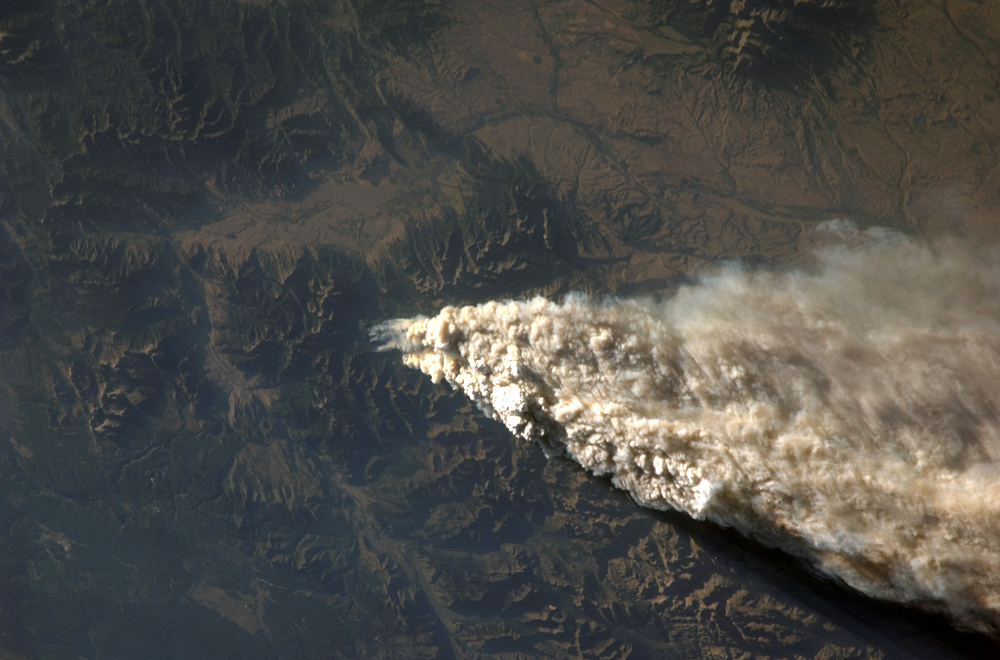 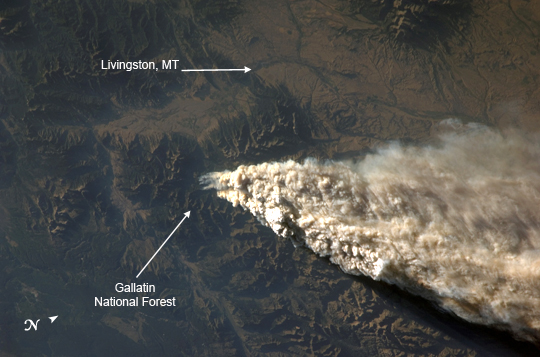 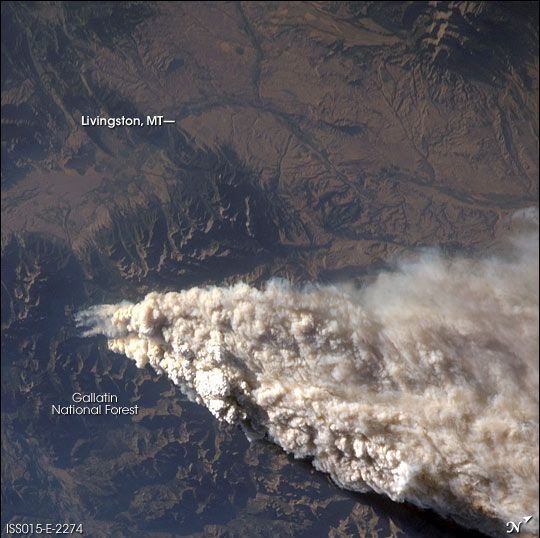 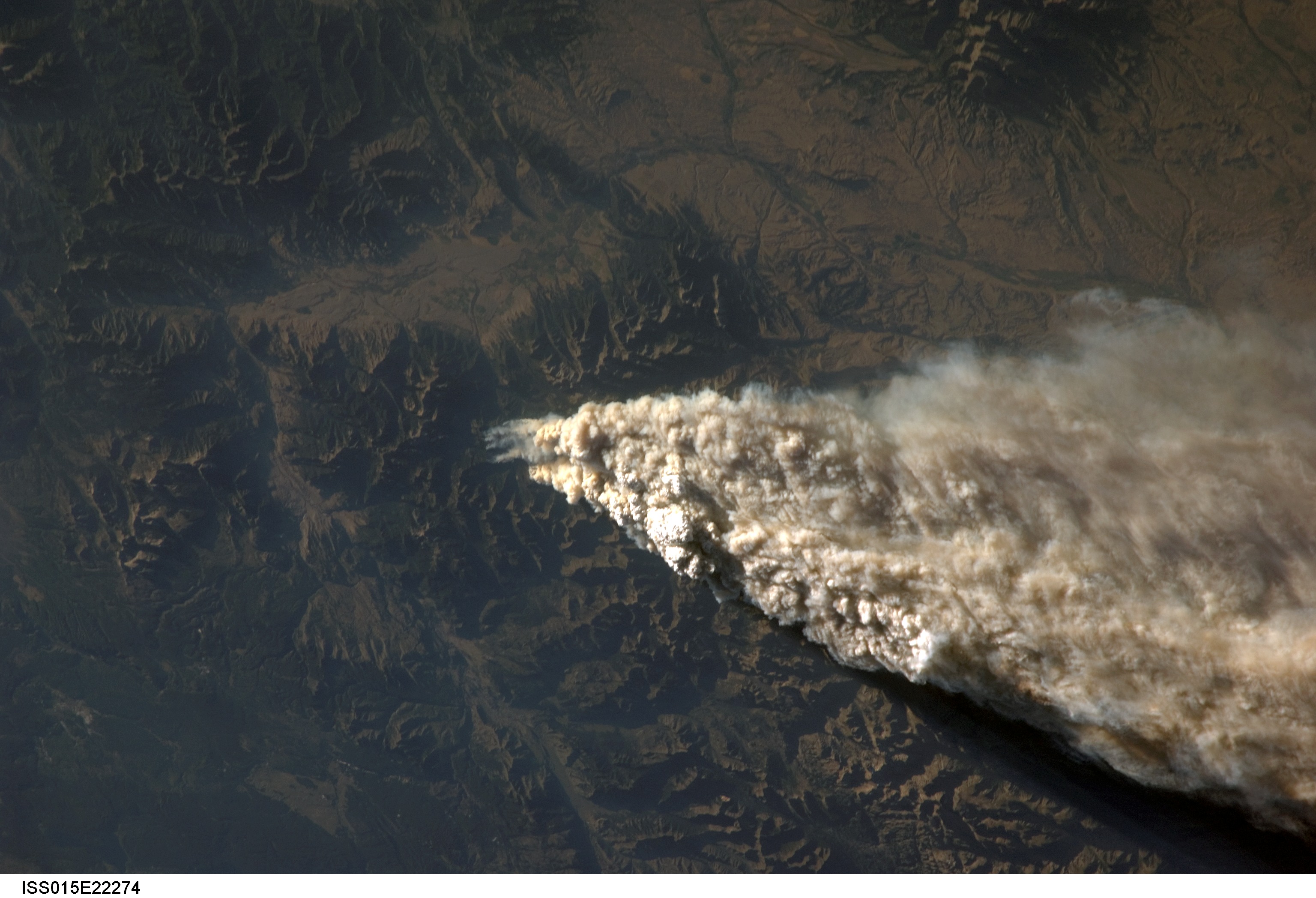 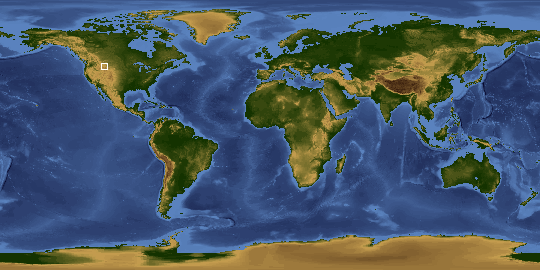 Other options available:
Download Packaged File
Download a Google Earth KML for this Image
View photo footprint information
Image Caption: ISS015-E-22274 (13 Aug. 2007) --- Smoke plumes from a forest fire in the Gallatin National Forest, Montana is featured in this image photographed by an Expedition 15 crewmember on the International Space Station while Space Shuttle Endeavour (STS-118) was docked with the station.

Smoke Plumes over Idaho and Montana:

On August 13, 2007, while docked to the International Space Station (ISS), the crew members of Shuttle Mission STS-118 and ISS Expedition 15 reported seeing the smoke plumes from wide-spread fires across Idaho and Montana. The crew photographed and downlinked images of isolated plumes (this image) and regional views of the smoke (ISS015-E-22276) from different perspectives. Strong westerly winds were driving the smoke eastward.

The close-up view shows the WH Complex Fire in southern Montana, which was burning in Gallatin National Forest. As of Friday, August 17, the National Interagency Fire Center estimated its size as 25,400 acres, and it was only 5 percent contained. The rugged topography that makes firefighting in the area so difficult is highlighted by shadows created by the oblique (from the side) perspective from which the astronauts took the photo. The plume has topography of its own, some plumes towering above others, casting dark shadows.

The regional view was taken looking westward toward the horizon. It shows fires not only in Montana, but also fires to the south in Wyoming, and to the northwest in Idaho. South (to the left) of the WH Complex Fire are the Columbine 1 Fire in Yellowstone National Park (18,500 acres and 0 percent contained), and the Hardscrabble Fire in Bridger-Teton National Forest (3,074 acres and 40 percent contained).

An even broader regional view of the extent of the fires was captured by the Moderate Resolution Imaging Spectroradiometer (MODIS) sensor onboard NASA's Aqua satellite on August 12, 2007, the day before these images were taken by astronauts onboard the ISS.