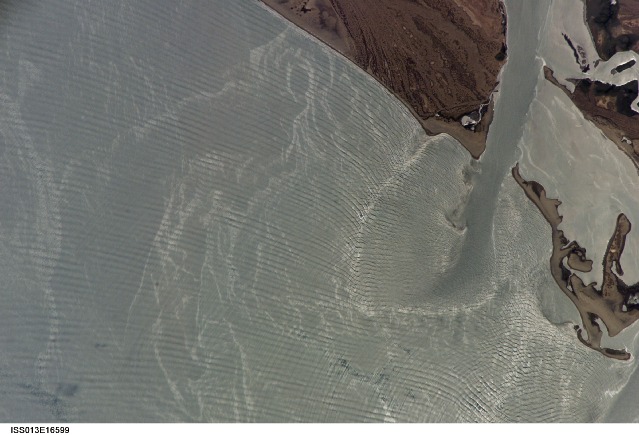 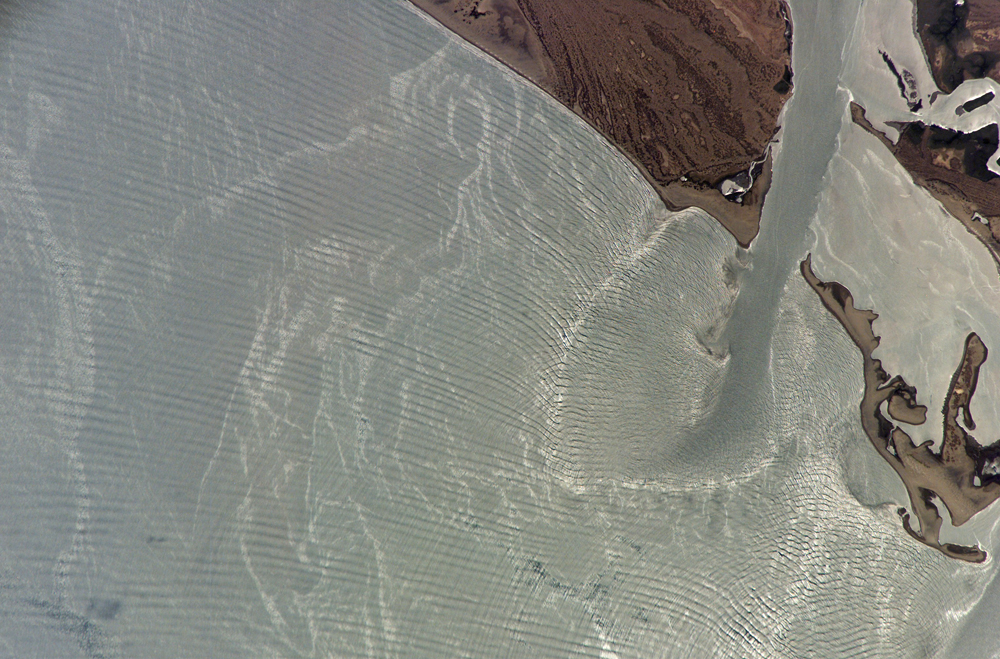 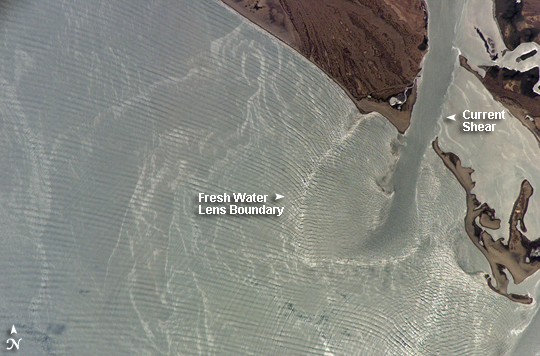 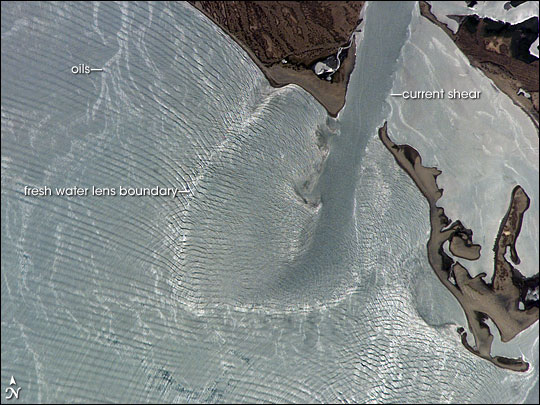 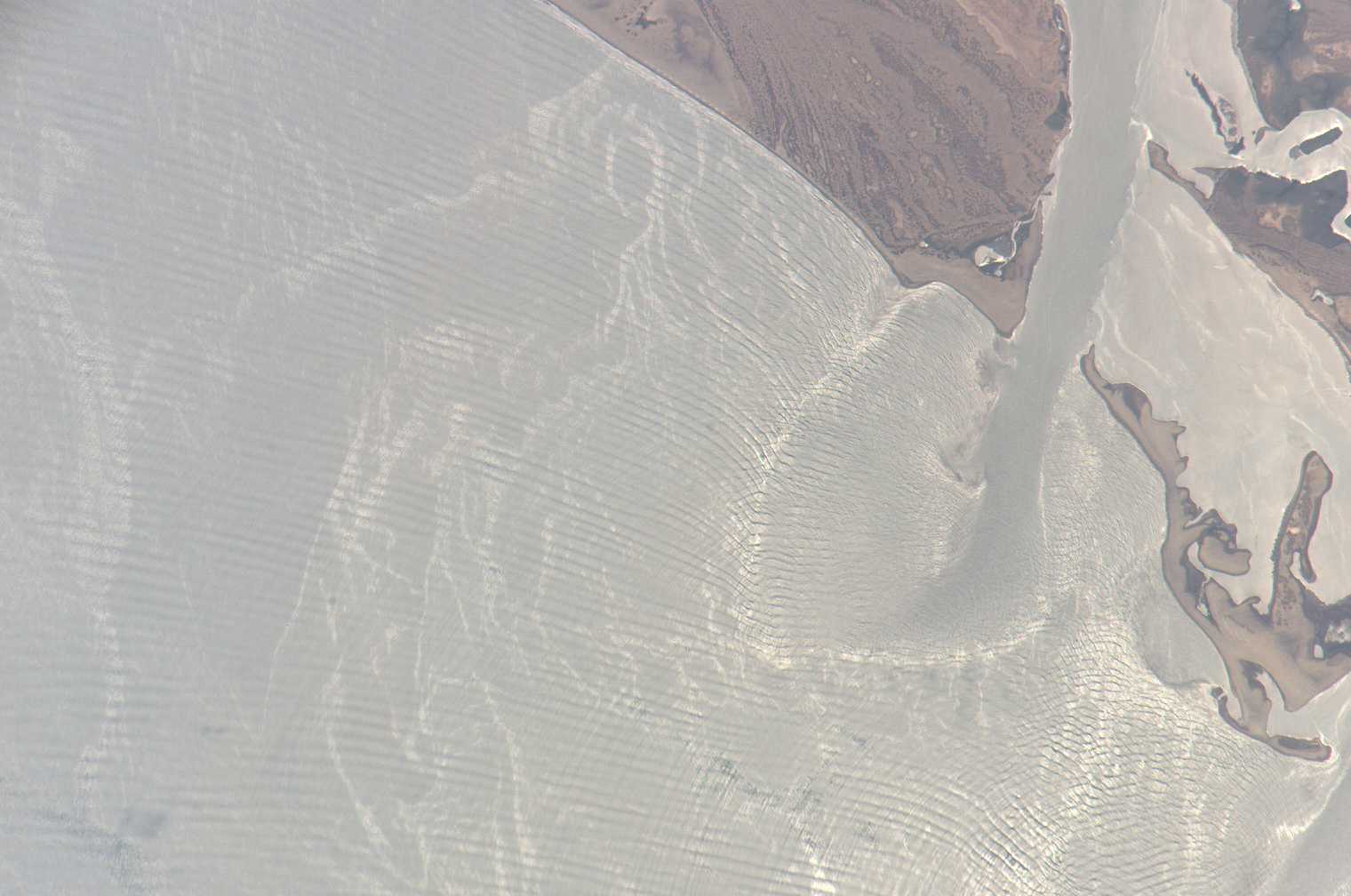 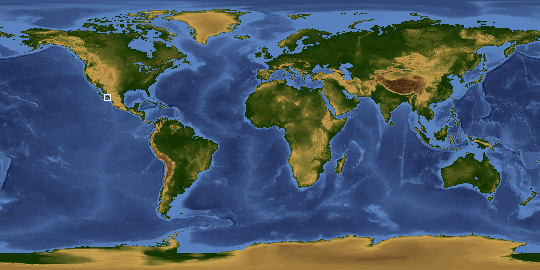 Sunglint (reflection of sunlight from the water surface directly back to the camera or satellite sensor) off the Gulf of California gives the water a silver-gray appearance rather than the normal azure color in this astronaut photograph. (Read Sunglint in Astronaut Photography of Earth for a more detailed explanation of sunglint.) The sunglint allows us to see several active features which wouldn't be visible otherwise. The image captures a moment in time displaying very active and complex ocean wave dynamics. In this view of Punta Perihuete, Mexico, we can see three major features: biological or man-made oils floating on the surface; the out-going tidal current; and complex wave patterns. The oils on the surface are recognizable as light-grey, curved and variable-width streamers shaped by the local winds and currents. Plankton, fish, natural oil seeps, and boats dumping their bilges are all potential sources for these oils.

This image was taken at 1:10 p.m. Mountain Daylight Time (19:10 Greenwich Mean Time), and low tide occurred later at 2:44 p.m. Mountain Daylight Time (20:44 Greenwich Mean Time). The outgoing, or ebb, current from Playa Colorado Bay is visible at upper right (the Bay itself is not shown). The current brings with it fresher and less dense water that appears as an elongated lens-shape as it flows on top of saltier Gulf water. This density difference causes obvious shear zones along the current boundary, and also a dampening of the ocean wave sets. Offshore, complex wave patterns, including intersecting wave sets, result from a variety of interactions of the moving water with the coastline. The sunglint allows identification of wave sets that are nearly perpendicular to the shoreline (bottom center), another wave pattern parallel to the shore (top center), and wave patterns caused by reflection and refraction (deflecting of the wave off a straight path) along a shoal area that also marks the boundary of the fresh water lens.