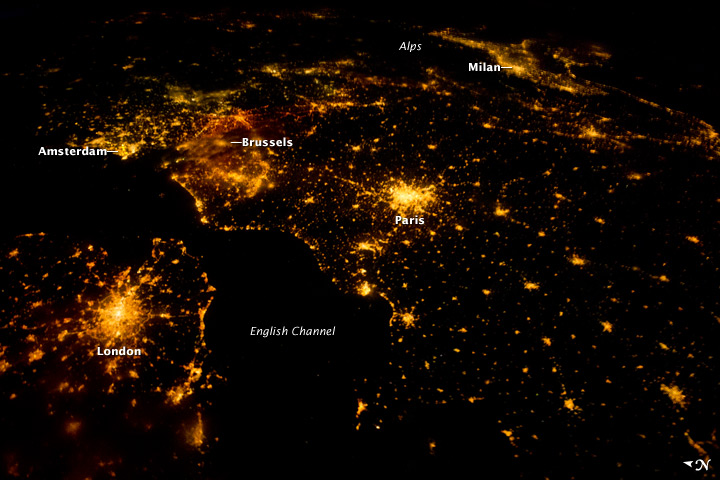 Several of the oldest cities of northwestern Europe are highlighted in this astronaut photograph from just after midnight (00:25 Greenwich Mean Time) on August 10, 2011. While the landscape is dotted with clusters of lights from individual urban areas, the metropolitan areas of London, Paris, Brussels, and Amsterdam stand out due to their large light “footprints.” The metropolitan area of Milan is also visible at image upper right. While each of these cities is, or has been, the capital of a kingdom, republic, or empire—Paris and London have been all three—Brussels is also the capital city of the European Union.

This photograph from the International Space Station (ISS) was taken with a short camera lens, providing the large field of view. To give a sense of scale, the centers of the London and Paris metropolitan areas are approximately 340 kilometers (210 miles) from each other. The image is also oblique—taken looking outwards at an angle from the ISS, which tends to foreshorten the image—making the distance between Paris and Milan (640 kilometers, or 400 miles) appear less than that of Paris to London.

In contrast to the land surface defined by the city lights, the English Channel presents a uniform dark appearance. Similarly, the Alps near Milan are also largely devoid of lights. While much of the atmosphere was clear at the time the image was taken, the lights of Brussels are dimmed by thin cloud cover.

Astronaut photograph ISS028-E-24360 was acquired on August 10, 2011, with a Nikon D3S digital camera using a 28 mm lens, and is provided by the ISS Crew Earth Observations experiment and Image Science & Analysis Laboratory, Johnson Space Center. The image was taken by the Expedition 28 crew. The image has been cropped and enhanced to improve contrast. Lens artifacts have been removed. The International Space Station Program supports the laboratory as part of the ISS National Lab to help astronauts take pictures of Earth that will be of the greatest value to scientists and the public, and to make those images freely available on the Internet. Additional images taken by astronauts and cosmonauts can be viewed at the NASA/JSC Gateway to Astronaut Photography of Earth. Caption by William L. Stefanov, Jacobs/ESCG at NASA-JSC.