The Great Bend in the Nile, By Day and Night

Halfway between the Nile delta in the north and the Sudanese border in the south, the Nile River cuts a deep U-shaped bend into the desert near Luxor. A mosaic of three digital photographs taken from the International Space Station shows the regional pattern and context of Nile agriculture in the desert. Viewed during the day, the dark river channel is bordered by green fields of the intensely farmed floodplain, with a few grayer areas showing the locations of urban areas. The sharp margins of the agriculture generally mark a distinct break between the valley floor and local dry wadis that lead down from the desert plateau. The patchy green areas at places along the edge of the floodplain (very prominent south of Naj' Hammadi) indicate where irrigation has expanded up onto the dry slopes.


Once the sun sets over the Nile (roll your mouse over the image above), modern lighting outlines a unique set of features. Later in his tenure on the space station, Astronaut Don Petit used his "barn door tracker" to take this nighttime photograph of the bend in the Nile. We expect to be able to identify cities at night by their bright lighting. By comparing the daytime and nighttime views of Nile, we can see that lights follow geological patterns as well. A faint strip of shoreline lights outlines the dark line of the river. Cities such as Luxor and Qena are bright and striking. Well-lit roads, such as the one from Luxor to its airport can be distinguished. A very unique feature of this night photograph is that the pattern of settlements on the slopes rising from the Nile valley produces the final outside strip of lighting.

The Nile has entrenched itself by erosion into the desert plateau by 1000-1500 feet, producing a maze of steep sided valleys, many with cliffs. The older upper surface of the plateau is slightly darker than the younger valley surfaces eroded into it due to the build-up of darker "desert varnish" minerals on rock surfaces. The older surfaces show another interesting geological feature known as eolian streaks. These are two-dimensional features generated by dominant winds from the northwest. These are long, lighter colored features of moving sand (or areas where sand has been swept away). 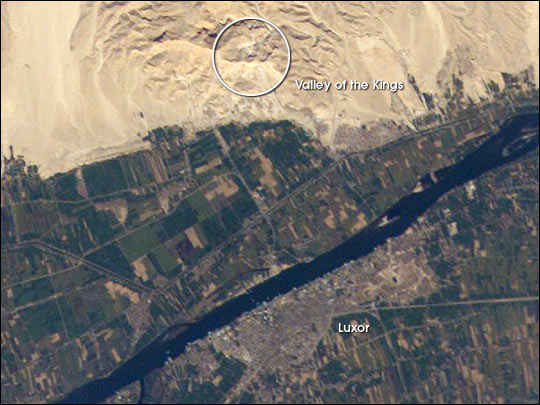 Luxor (the ancient Thebes) is the location of the great necropolis known as the Valley of the Kings. By using the full detail in one of the space station photographs (circled), we can see the light colors exposed from archaeological excavation. The valley is a narrow, easily defended ravine where the plateau extends closest to the Nile and to the city of Luxor. Possibly more important was the valley's symbolic location on the west side of the Nile in the direction of the setting sun, which was associated with the afterlife. The sun passed over the pharaoh's mortuary temple, built for their cult on the floodplain near Thebes, and then over the pharaoh's tomb in the valley, a symbolically important connection.