Living on the Edge of the Taklimakan Desert 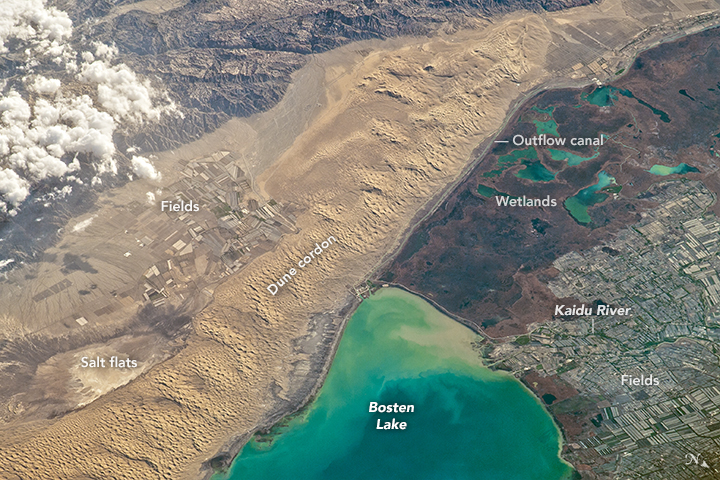 Orbiting over the deserts of Asia, a crew member aboard the International Space Station (ISS) used a 400 millimeter lens to capture an unusual mix of desert dunes and dense populations. A major cordon of dunes dominates this oblique view. The dunes form the shoreline of Bosten Lake in China’s far northwest. Even in this desert region, rain and snowfall in the Tien Shan Mountains (immediately to the north) generate enough water to support the small but dense population (55,000 people). (Note that north is to the lower right in this image.)

The Kaidu River brings mountain water to numerous, close-packed fields, while feeding muddy sediment into the waters of the lake. Over the centuries, sediments from the Kaidu have built up a large, smooth alluvial fan, now mostly covered with fields. Other, less prominent fields occupy smaller fans on the other side of the dune cordon (top left). Water from the lake infiltrates under the dunes and evaporates on the other side, producing salt flats. Neither the toxic, salty soils of these flats, nor the dune sands can be used to grow crops.

Bosten Lake holds fresh water and supplies fish for the local population. The lake covers about 1,000 square kilometers (390 square miles), making it one of the largest inland lakes in China. An outflow channel follows the dune margin, where it has been modernized as an engineered canal.

Interestingly, a sediment core drilled from the lake bed has shown scientists how ephemeral this water supply is. Geologists now know that the lake has dried out 11 times in the past 8,500 years.

Astronaut photograph ISS047-E-54173 was acquired on May 11, 2016, with a Nikon D4 digital camera using a 400 millimeter lens, and is provided by the ISS Crew Earth Observations Facility and the Earth Science and Remote Sensing Unit, Johnson Space Center. The image was taken by a member of the Expedition 47 crew. The image has been cropped and enhanced to improve contrast, and lens artifacts have been removed. The International Space Station Program supports the laboratory as part of the ISS National Lab to help astronauts take pictures of Earth that will be of the greatest value to scientists and the public, and to make those images freely available on the Internet. Additional images taken by astronauts and cosmonauts can be viewed at the NASA/JSC Gateway to Astronaut Photography of Earth. Caption by M. Justin Wilkinson, Texas State University, Jacobs Contract at NASA-JSC.