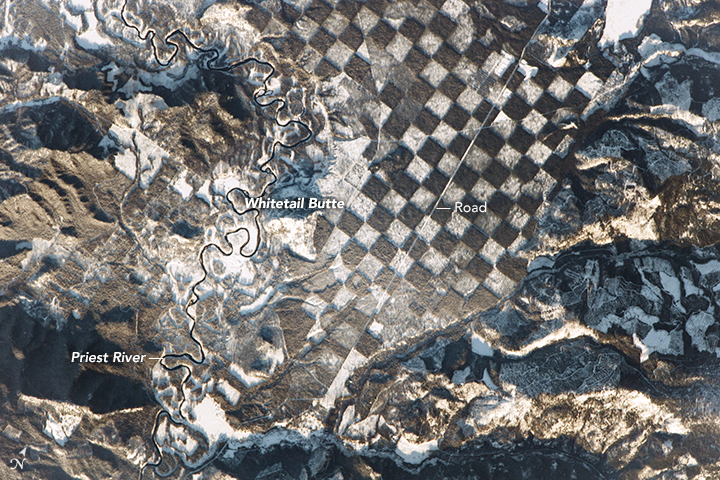 An astronaut aboard the International Space Station observed this distinctive checkerboard pattern alongside the Priest River in northern Idaho. The photograph was taken just before sunset, so some mountainsides glow while others are covered in long shadows because of the low Sun angle.

The white squares in the checkerboard show where snow has fallen on deforested ground—where trees have been removed for logging. These patches alternate with dark brown-green squares of dense forest, where trees obscure the snow from the astronaut’s view.

The checkerboard pattern is the result of an agreement made in the early 1800s where alternate one-square-mile parcels of land were granted by the U.S. government to the Northern Pacific Railroad. These parcels were later sold to private companies and stripped for timber. The pattern is now seen as a method of maintaining the sustainability of forested tracts while still enabling logging companies to harvest trees. The forested squares are reserves managed by the U.S. Forest Service. Whitetail Butte has historically been used by the Forest Service as a lookout point for forest fires.

Dense vegetation acts as a natural filtration system for nearby rivers, preserving water quality from soil eroded off deforested hillsides. The Priest River, winding through the scene from top to bottom, is bordered on both sides by a forest buffer to further protect the quality of its water. For nearly a century, the river was used to transport logs. Its function changed in 1968 when the river’s main stem was added to a list of “wild and scenic rivers” in order to preserve its “outstanding natural, cultural, and recreational values in a free-flowing condition for the enjoyment of present and future generations.”

Astronaut photograph ISS050-E-28519 was acquired on January 4, 2017, with a Nikon D4 digital camera using an 1150 millimeter lens, and is provided by the ISS Crew Earth Observations Facility and the Earth Science and Remote Sensing Unit, Johnson Space Center. The image was taken by a member of the Expedition 50 crew. The image has been cropped and enhanced to improve contrast, and lens artifacts have been removed. The International Space Station Program supports the laboratory as part of the ISS National Lab to help astronauts take pictures of Earth that will be of the greatest value to scientists and the public, and to make those images freely available on the Internet. Additional images taken by astronauts and cosmonauts can be viewed at the NASA/JSC Gateway to Astronaut Photography of Earth. Caption by Andi Hollier, Hx5, and M. Justin Wilkinson, Texas State University, Jacobs Contract at NASA-JSC.