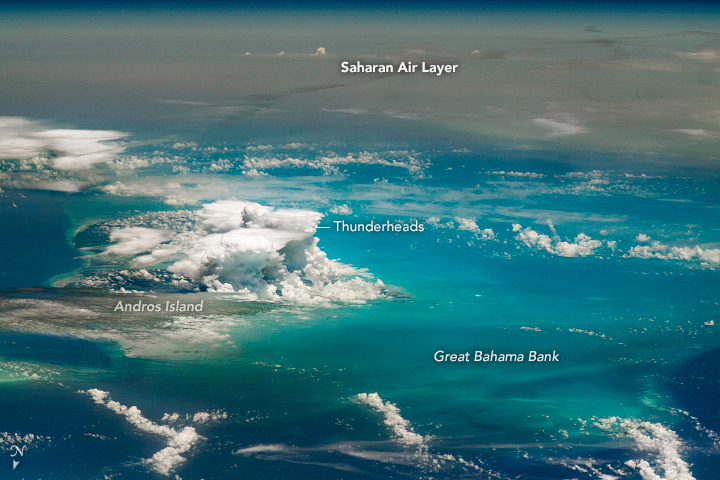 An astronaut aboard the International Space Station (ISS) took this photograph of storm clouds rising over Andros Island, one of the Bahama Islands. Even though the spacecraft was passing over southern Indiana (nearly 1800 kilometers/1100 miles north of Andros Island) at the time of the photo, the crew managed to shoot what seems like a close-up view by using a long lens (400 mm). They caught thunderstorms developing over the island, as well as features of the shallow sea floor known as the Great Bahama Bank.

Beyond the towering storms, the dull gray-brown pall of a dust plume is draped across the Caribbean Sea and Atlantic Ocean. The haze is so dense that it completely obscures the island of Cuba from the astronaut's view. Two days after this photo was taken, people on the ground in Cuba saw the Sun significantly dimmed by the dusty haze.

This huge dust mass had been lofted ten days earlier from the vast sandy surfaces of the western Sahara Desert. The dust plume stretched across the Atlantic Ocean from northwestern Africa, a distance of more than 7000 kilometers (4,200 miles). Two days before this shot, an astronaut took an image of the same dust mass over the open ocean; the sea surface was completely obscured from view for hundreds of miles.

Scientists are keenly interested in Saharan dust plumes because they are known to depress hurricane development. The strong upper-level winds that can carry dust across great distances can also effectively shear off the tops of budding storms before they develop into hurricanes. The dry desert air also reduces the moisture content of the air it encounters over the open ocean. This reduces the airborne moisture that forms clouds and energizes hurricanes. This photo hints at this difference between these air masses: In contrast to the thunderstorms over tropical Andros Island, there is only a small cumulus cloud within the dust mass.

The dust event in June 2020 was among the thickest over the Atlantic Ocean since the year 2000, as revealed by this compilation of monthly dust and smoke loadings. In 1994 and 2001 astronauts took photographs of less dense Saharan dust plumes over the same region.

Astronaut photograph ISS063-E-32223 was acquired on June 23, 2020, with a Nikon D5 digital camera using a 400 millimeter lens and is provided by the ISS Crew Earth Observations Facility and the Earth Science and Remote Sensing Unit, Johnson Space Center. The image was taken by a member of the Expedition 63 crew. The image has been cropped and enhanced to improve contrast, and lens artifacts have been removed. The International Space Station Program supports the laboratory as part of the ISS National Lab to help astronauts take pictures of Earth that will be of the greatest value to scientists and the public, and to make those images freely available on the Internet. Additional images taken by astronauts and cosmonauts can be viewed at the NASA/JSC Gateway to Astronaut Photography of Earth. Caption by Justin Wilkinson, Texas State University, JETS Contract.