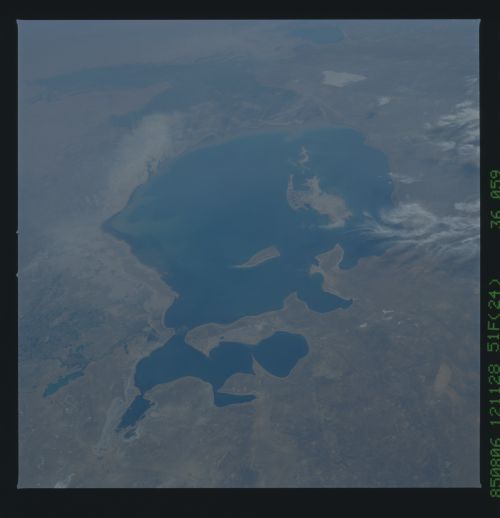 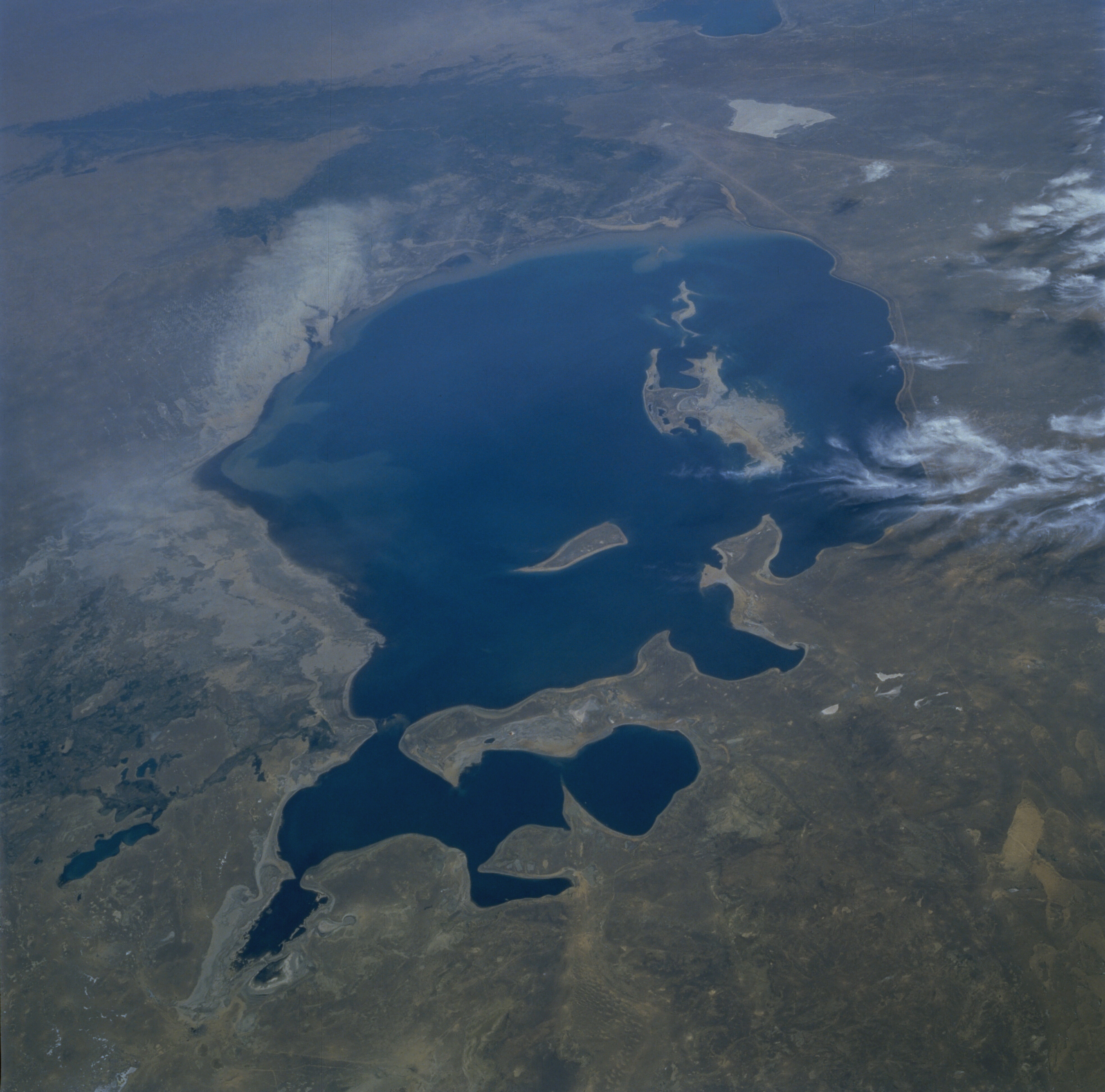 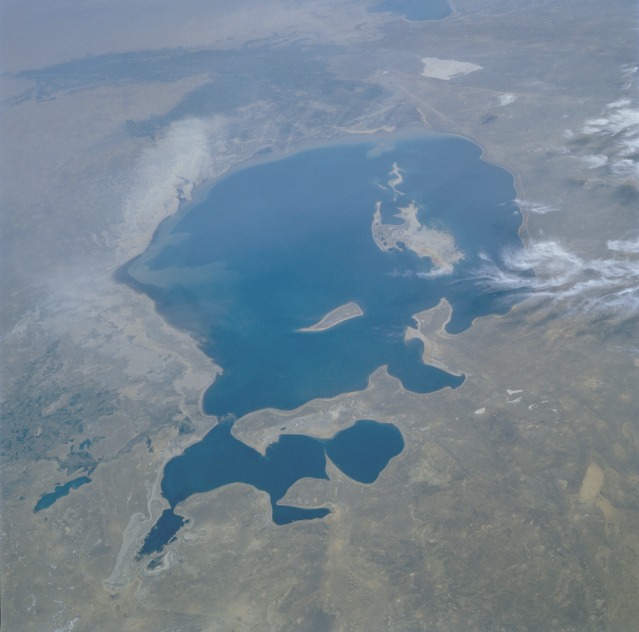 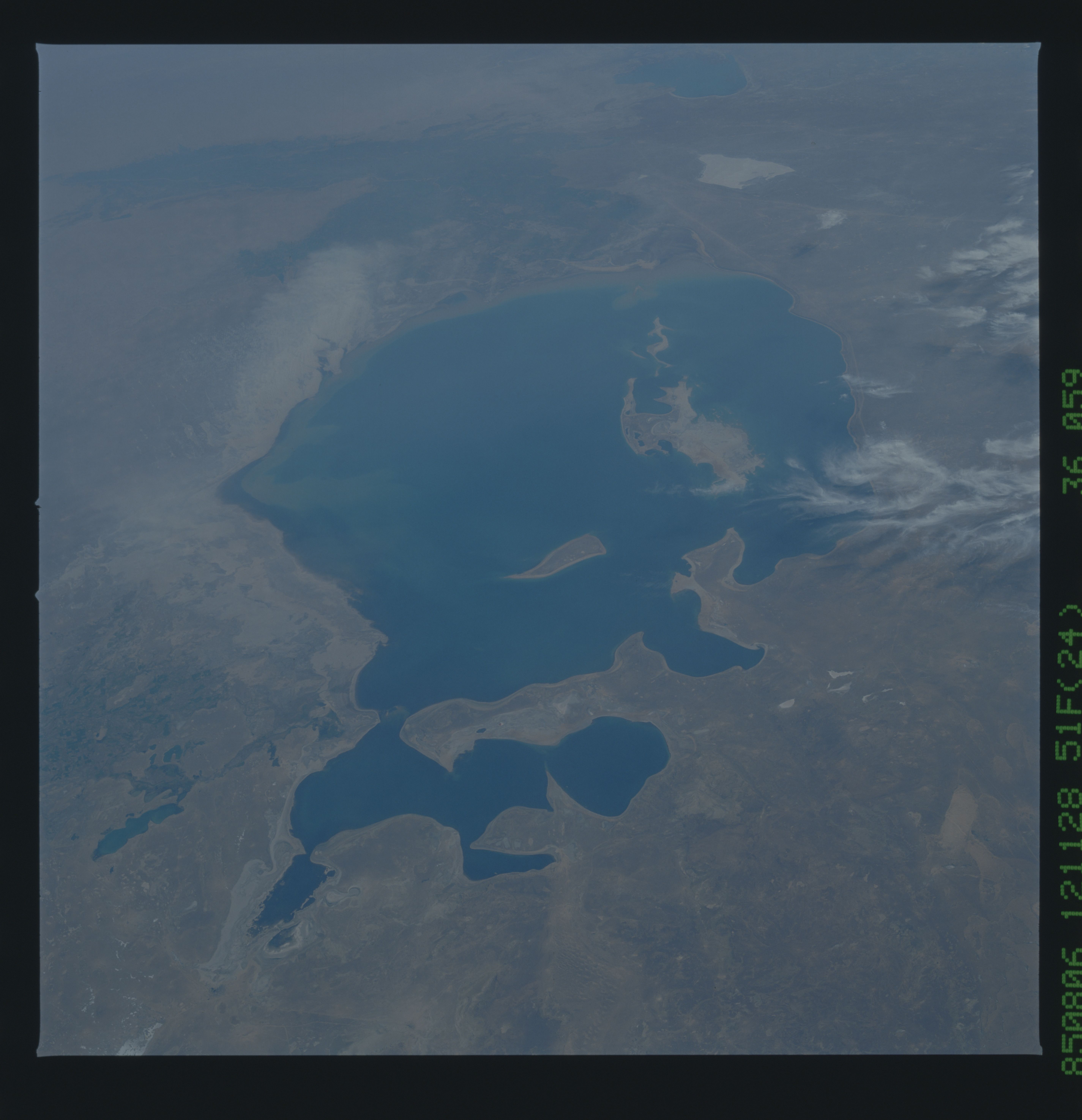 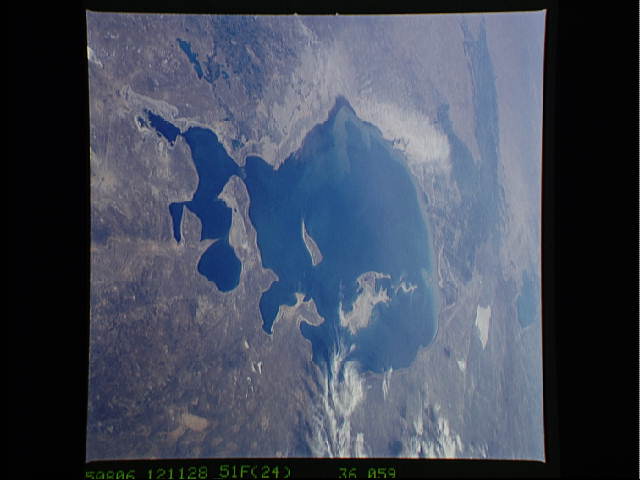 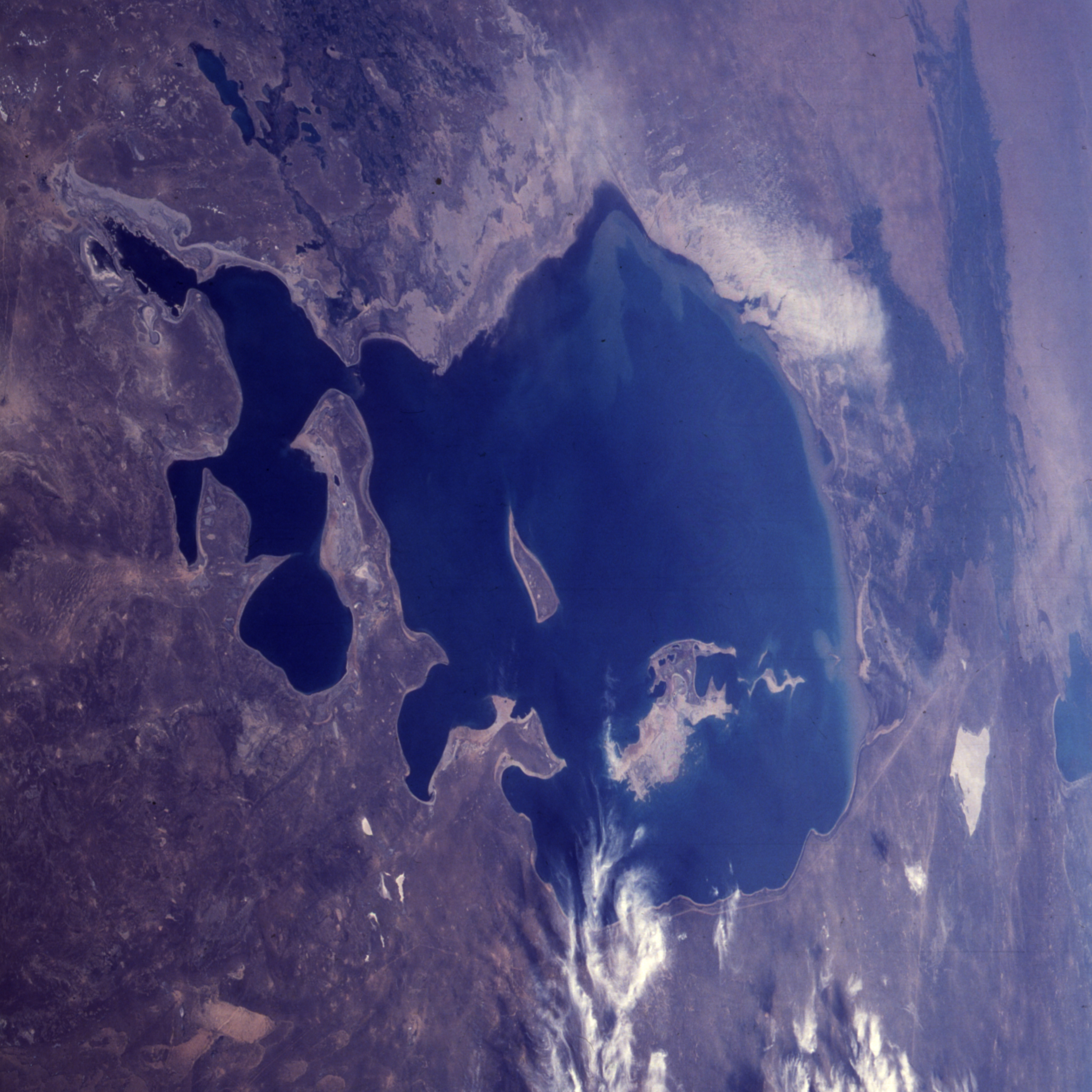 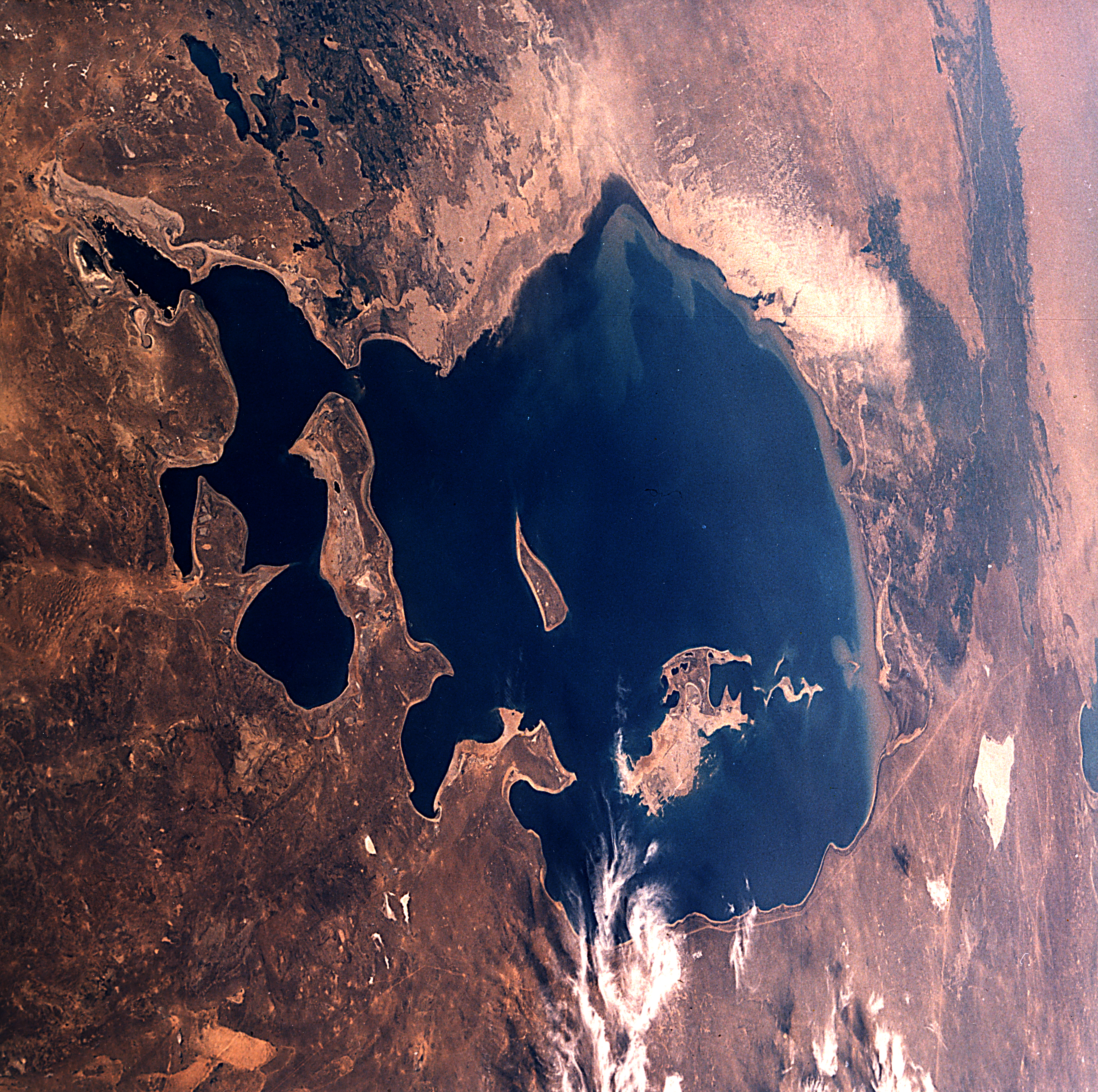 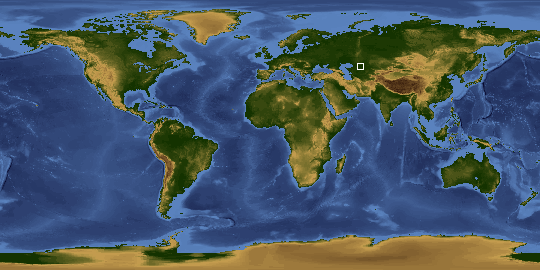 Other options available:
Download Packaged File
Download a Google Earth KML for this Image
View photo footprint information
Image Caption: STS51F-36-59 Aral Sea, Kazakhstan and Uzbekistan July 1985
The Aral Sea, the fourth largest lake in the world, can be seen in this low-oblique, south-looking view. When this photograph was taken, the Aral Sea covered an area of approximately 26 000 square miles (67 000 square kilometers), was approximately 260 miles (420 kilometers) long, 175 miles (280 kilometers) wide, and had an average depth of 33 feet (10 meters) and a maximum depth of 220 feet (70 meters). Separated from the Caspian Sea millions of years ago and landlocked at the center of a broad basin, the Aral Sea is surrounded on all sides by desert or steppe. Although two major rivers feed the sea, the Amu Darya from the south and the Syr Darya from the northeast, there is no outlet. Before 1960, the sea was only slightly saline. The development of agricultural irrigation projects along both river courses in the late 1950s impeded the flow of water, and little or no fresh water reaches the sea now. With reduced quantities of fresh water and constant evaporation, the sea has become more saline and has shrunk drastically since the early 1960s. It has also become polluted with numerous pesticides and fertilizers. Two islands can be seen emerging from the Aral Sea. Barsa-Kel'mes Island is the pointed island in the north-central part of the sea; Vozrozhdeniya Island is the broad island in the west part of the sea. To the south, the darker colored, irrigated agricultural lands along the Amu Darya are visible. East of the sea near the shoreline, a duststorm (whitish area) of exposed sea bottom sediments can be seen moving southwestward toward the darker agricultural areas. Sea bottom sediments and past shorelines are visible (whitish-gray areas) along all parts of the sea and the emerging islands. (See STS047-079-083 for a comparison of how the Aral Sea has continued to shrink in only seven years.)