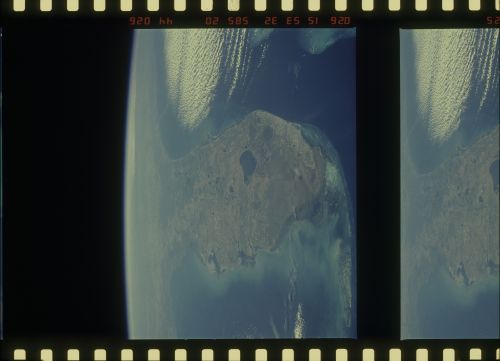 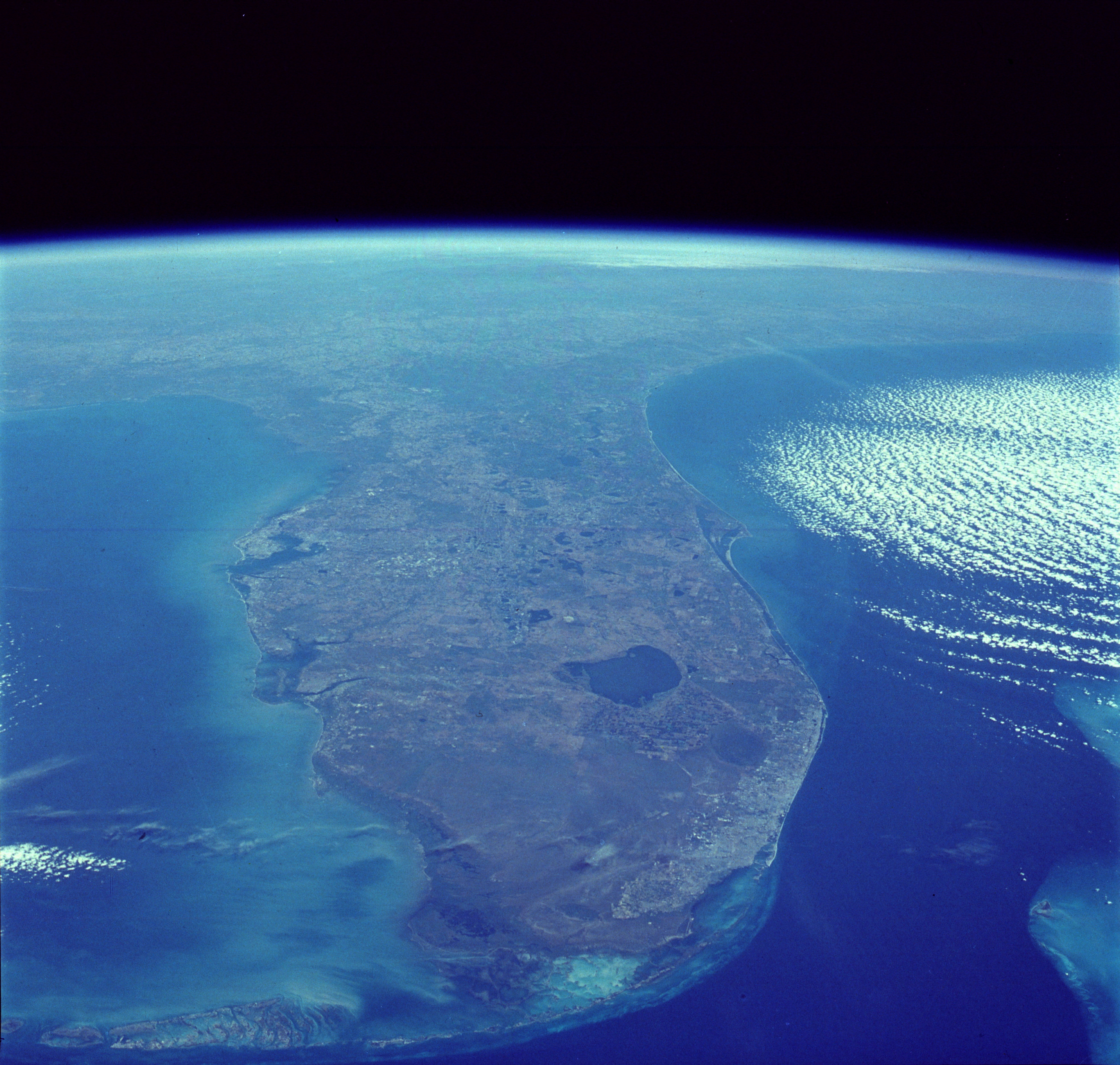 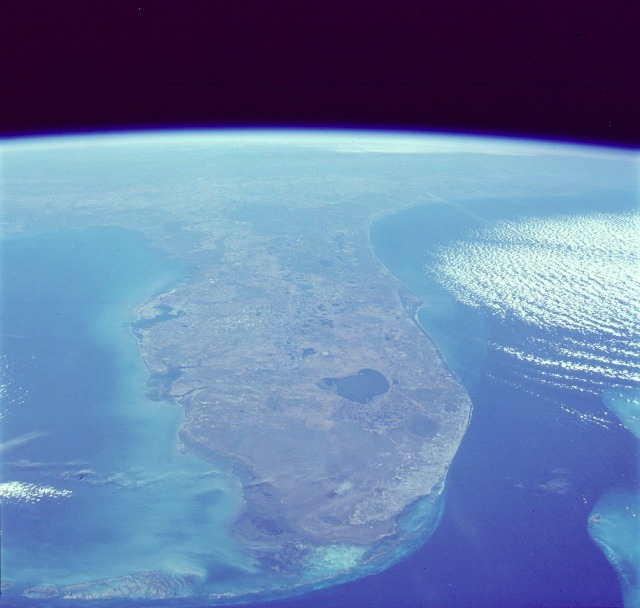 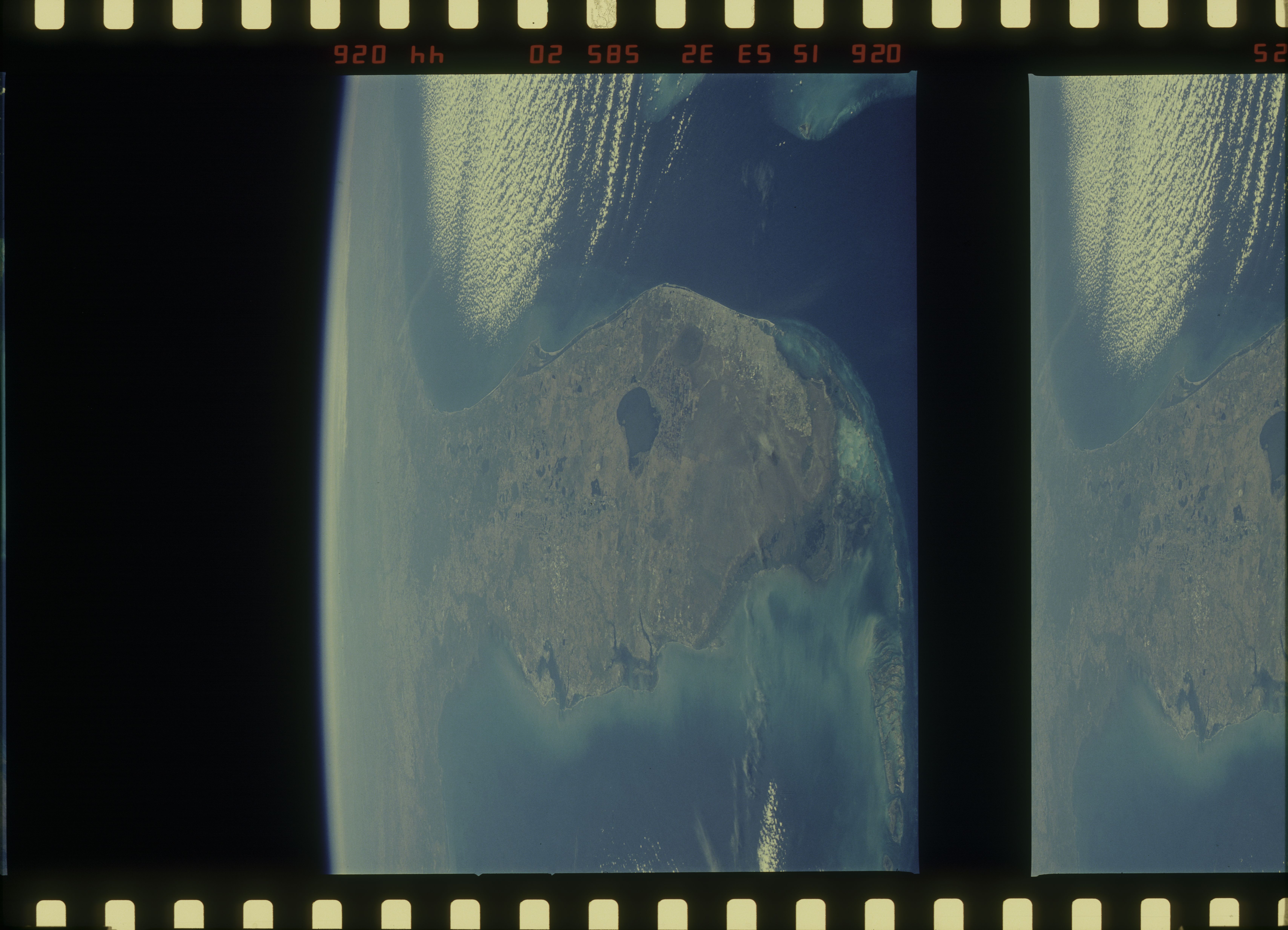 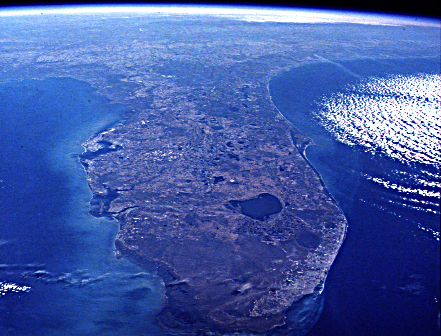 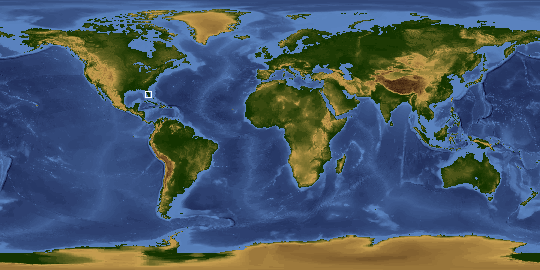 Other options available:
Download Packaged File
Download a Google Earth KML for this Image
View photo footprint information
Image Caption: STS51C-44-26 Florida Peninsula, Florida, U.S.A. January 1985
The Gulf of Mexico and the Gulf Stream bracket the Florida Peninsula on the west and east. The lighter shade of blue in the Gulf of Mexico is due to the much shallower (continental shelf) water depths of less than 200 feet (60 meters), whereas the much darker blue of the Gulf Stream is due to water depths in excess of 2000 feet (610 meters). Tampa Bay and Charlotte Harbor are fairly large water embayments along the west coast, and Lake Okeechobee is the large body of water in the south-central part of the state. Numerous smaller lakes can also be seen generally extending north and south through the central part of the state. Practically all of the lakes in central Florida have been created by the interaction of water with the limestone rock that underlies most of the state. Thus, through time, sinkholes have developed, occasionally swallowing houses and roads as the limestone rock collapses. This type of topography is termed "karst." Visible along the southeastern coast of Florida is a large urban area that stretches roughly from Homestead in the south to beyond West Palm Beach in the north (including the greater Miami area). This built-up area is known as the "Gold Coast" of Florida. To the west of this vibrant and ever-growing urban area is the vast, relatively uniform-looking swampland of the Everglades, which is virtually uninhabited by humans. In fact, most of the flat, saw grass landscape is occasionally interrupted by small stands of hardwood hammocks; this area is part of the Big Cypress National Preserve and the Everglades National Park. Most of the Florida Keys are visible as they form an archipelago that arcs to the southwest from the southern tip of Florida. Also visible are parallel lines of clouds that have been formed as a cool air mass from the northwest is pushed across the warmer water of the Gulf Stream. A very faint smoke plume that originates near the Georgia-South Carolina border provides a clue to the wind direction at the time this photograph was taken.

Almost the entire state of Florida, USA (28.0N, 81.5W) can be seen in this single view from space. The large urban area on the SE coast is the greater Miami, Fort Lauderdale, Boca Raton and West Palm Beach complex. Half way up the coast is the Kennedy Space Center at Cape Canaveral where the space shuttle lifts off into space. Even at this great distance, the huge Vehicle Assembly Building, causeway and launch areas can still be easily seen.

Florida was formed over many millions of years by sand swept from the Appalachian Mountains, mixed with calcium carbonate grains and mud precipitated from sea water and grown by animals and plants. Appalachian sand still builds capes such as Canaveral and Sable; under the present climate, calcium carbonate sediment is largely confined to the Miami/Keys/Florida Bay region.