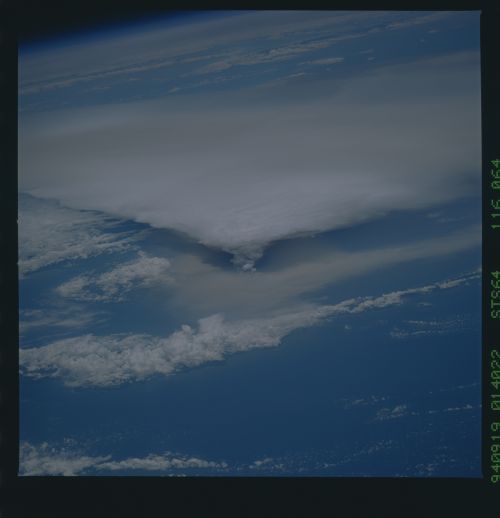 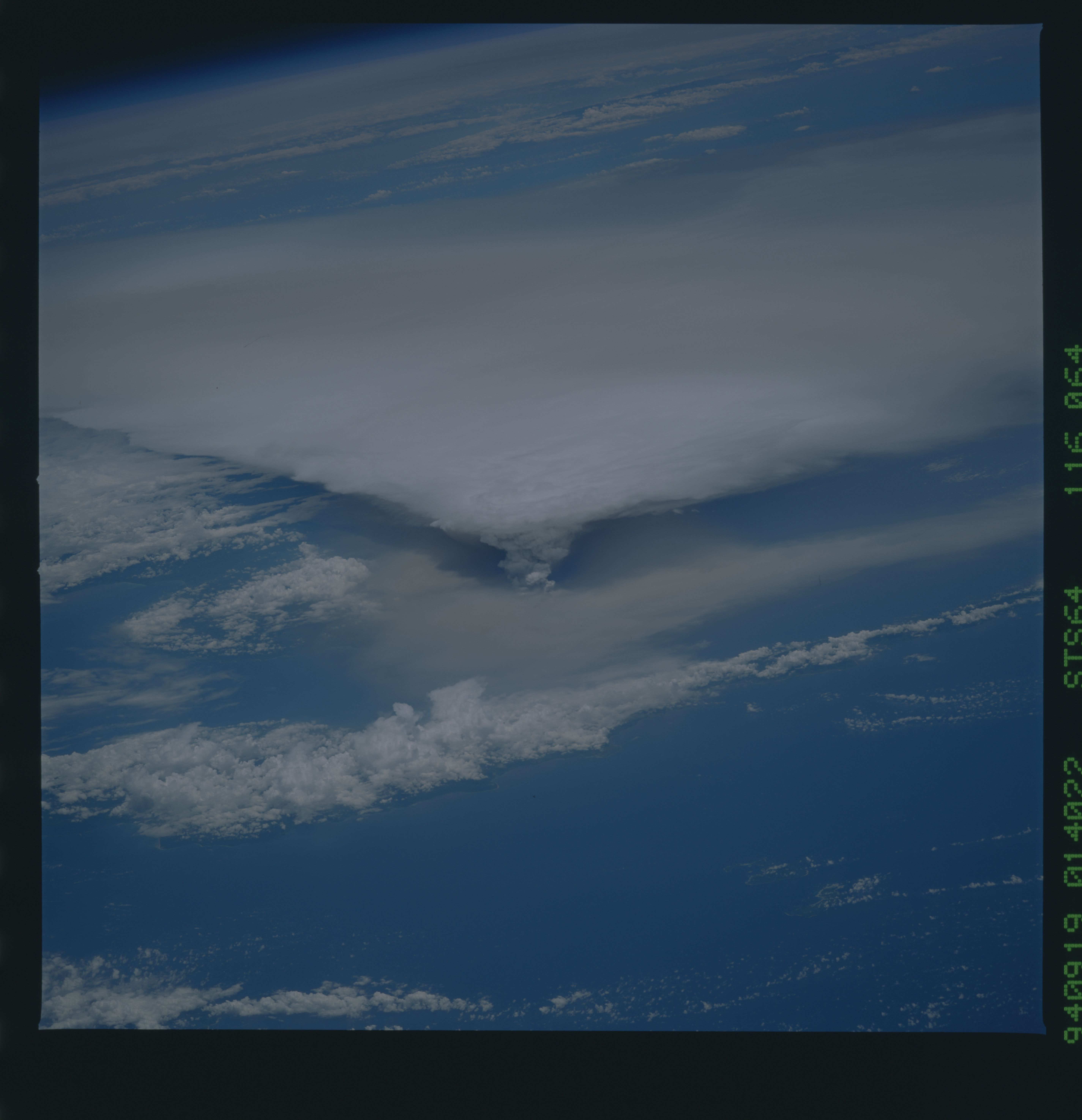 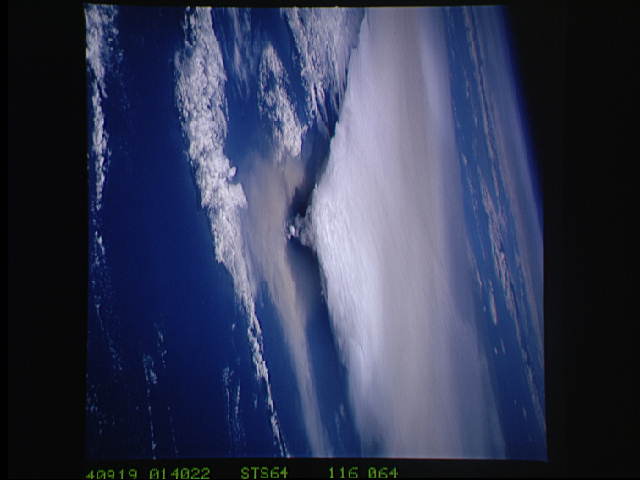 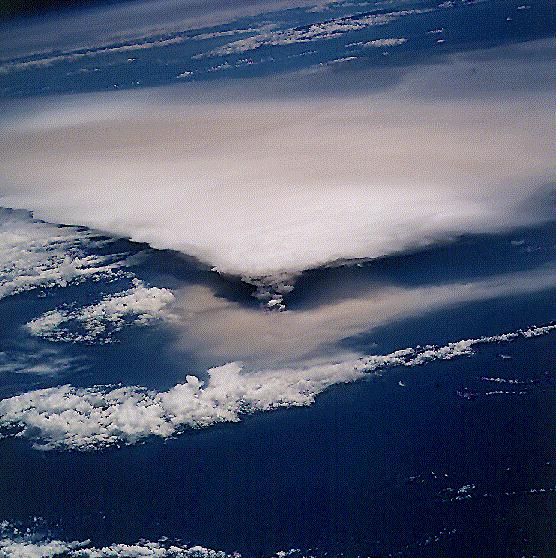 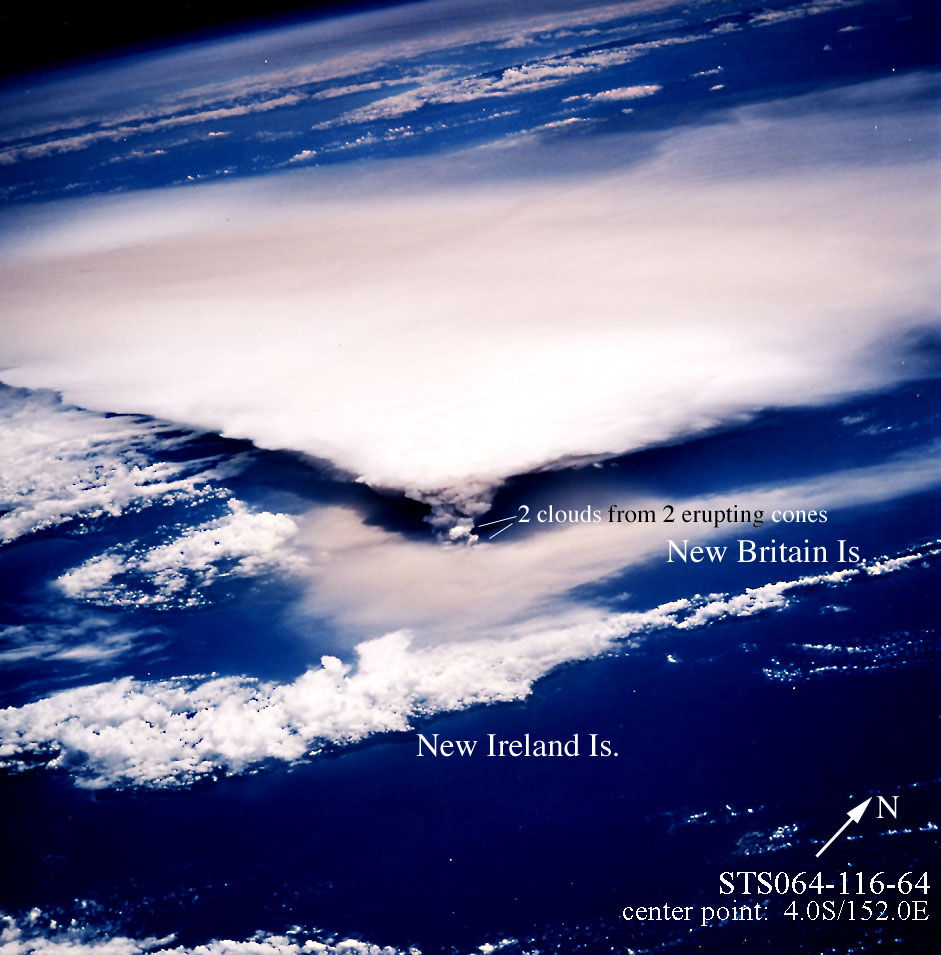 Other options available:
Download Packaged File
Download a Google Earth KML for this Image
View photo footprint information
Download a GeoTIFF for this photo
Image Caption: Rabaul eruption plume, New Britain,
Papua New Guinea
This oblique view of the Rabaul eruption provides
perspective on the immense size of the eruption plume,
estimated to be more than 60,000 ft. high. Rabaul is the
largest volcanic event since the eruption of Mt. Pinatubo
in the Philippines in June, 1991.
New Ireland, the cloud-covered area in the foreground,
lies just east of Rabaul harbor. The yellow-brown
colored cloud near the ground is volcanic ash which is
being carried by low-level winds in a NNW direction.
There is also ash on top of the main eruption column,
which is being carried by upper-level winds to the WSW.
The two volcanic clouds are possibly from two different
volcanic vents. The Papua New Guinea mainland is in the
distance.
Economic outfall from the eruption includes the
complete destruction of a key port in the Bismarck
archipelago. Also, Rabaul was the principal port for
getting relief supplies to the island of Bougainville,
which has been in a civil war for 5 years.

Near the end of the STS-64 mission, the crew aboard Space Shuttle Discovery was able to document the beginning of the second day of activity of the Rabaul volcano, on the east end of New Britain. On the morning of September 19, 1994, two volcanic cones on the opposite sides of the 6 kilometer sea crater had begun to erupt with little warning. Discovery flew just east of the eruption roughly 24 hours after it started and near the peak of its activity. New Ireland, the cloud covered area in the foreground, lies just east of Rabaul harbor. This photo shows the large white billowing eruption plume is carried in a westerly direction by the weak prevailing winds. At the base of the eruption column is a layer of yellow-brown ash being distributed by lower level winds. A sharp boundary moving outward from the center of the eruption in the lower cloud is a pulse of laterally-moving ash which results from a volcanic explosion.