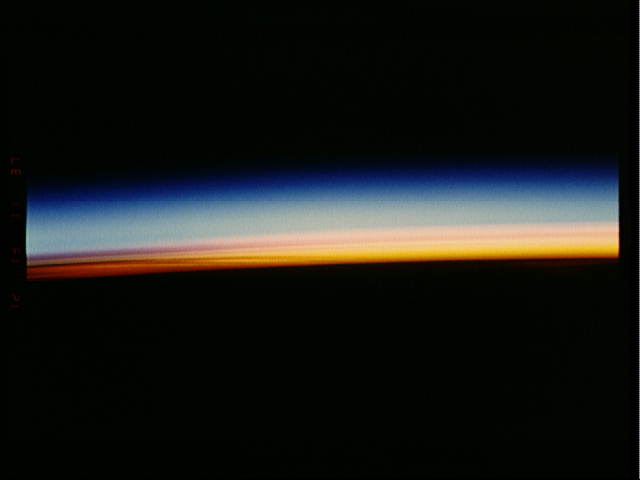 
Spacecraft Altitude: nautical miles (0km)
Other options available:
Download Packaged File
Download a Google Earth KML for this Image
View photo footprint information
Image Caption: STS-56 Earth observation shows a sunset in the southern hemisphere, as seen from east to west by the astronaut crewmembers aboard the Earth-orbiting Discovery, Orbiter Vehicle (OV) 103. Classic color changes from reds to blues are caused by white (composite) light passing through density and atmospheric particulate boundaries. Colors are refracted preferentially according to the diameter of the particles in the visible spectrum with longer wavelengths (reds) refracted the most. The phenomena can be seen here as the reds (0.7 micron) are bent the most while blues (0.4 micron) are bent the least. The dark substance suspended in the upper stratosphere in the left portion of this scene is of unknown origin. NASA scientists studying the STS-56 photography feel that the most likely sources for these substances are volcanic ash or sulfur dioxide (SO2) ejected into the stratosphere by volcanoes, such as the recent eruptions of Mt. Pinatubo (Philippines), Mt Spurr (Alaska), and Mt. Hudson (Chil