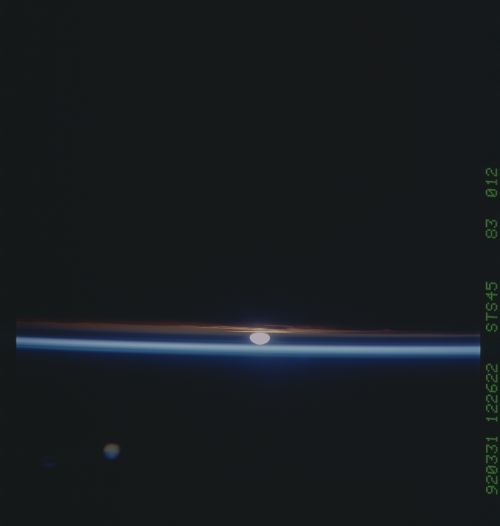 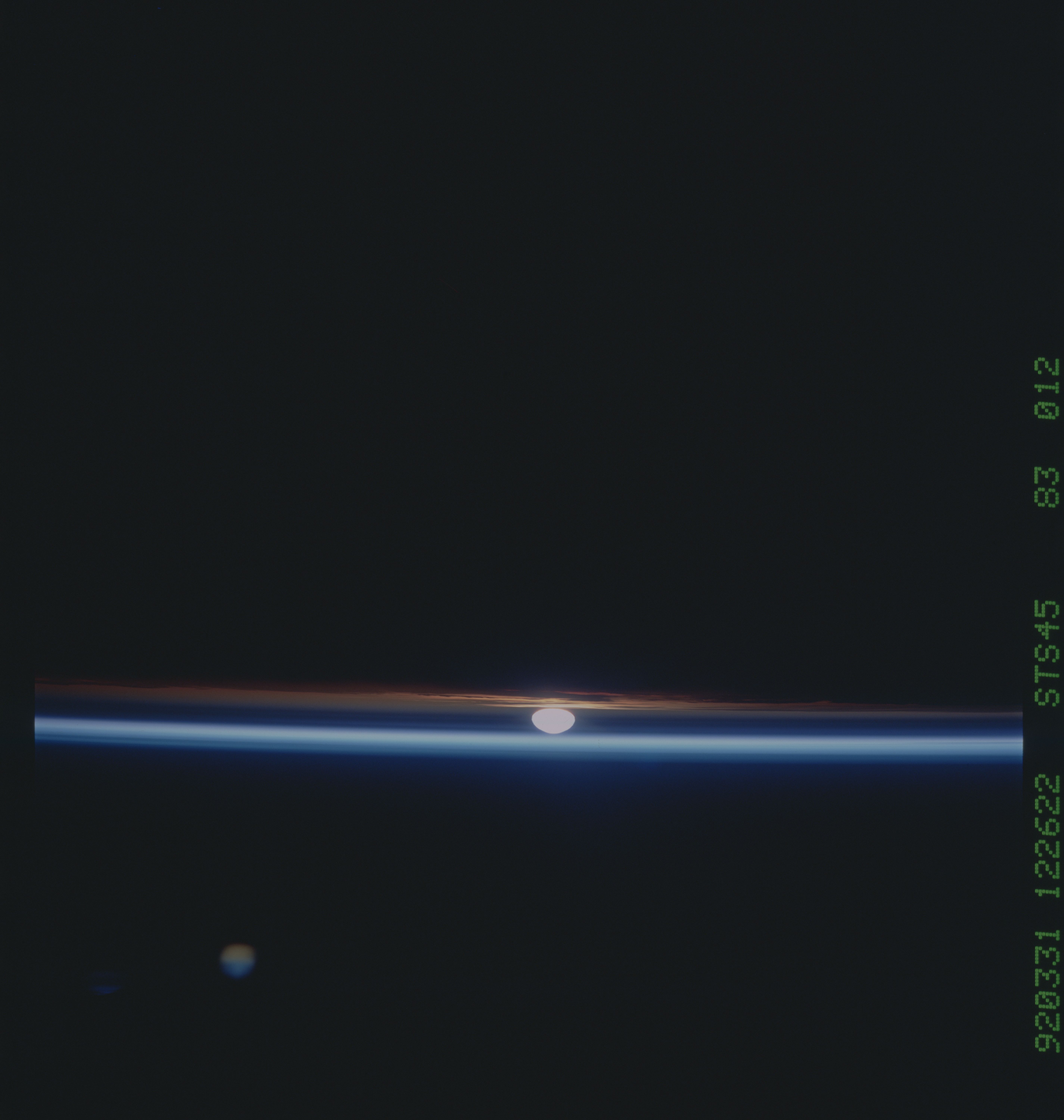 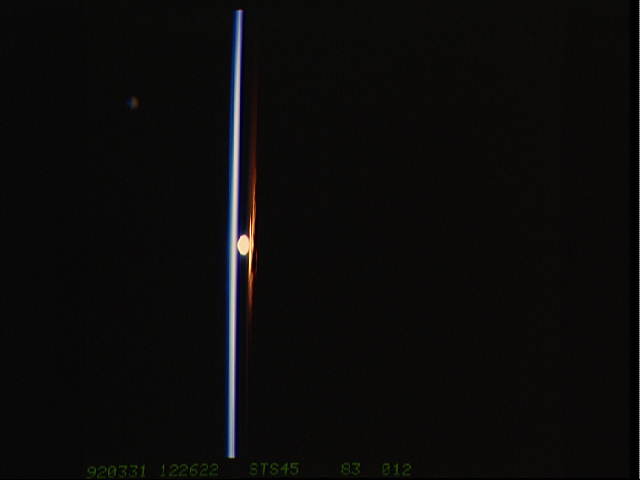 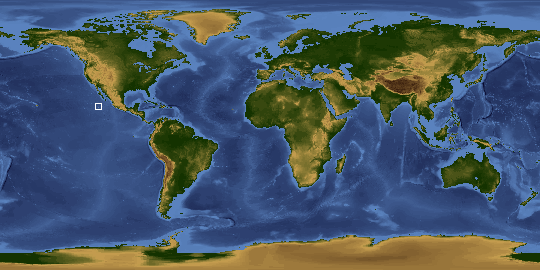 Other options available:
Download Packaged File
Download a Google Earth KML for this Image
View photo footprint information
Image Caption: April 92', Sun as seen through particle layer
in atm.
Shuttle Sunrise as seen from 155 nautical miles above Pecos,
Texas. To the surface observer, the Sun is still 4 degrees
below the horizon. From this view, much of the solar
radiant energy is scattered by the residue from the Mt.
Pinatubo eruption last year. The dark band extending across
the image, through which the Sun is visible, extends from 17
to 26 kilometers above the Earth's surface. These aerosols
(which consist primarily of sulfuric acid crystals) scatter
the incoming sunlight. Some of the scattered sunlight
strides the surface of the Earth, providing colorful
sunrises and sunsets. Some is scattered back to space. The
bright band above the aerosol layer is caused in part by
secondary scattering of the light scattered back to space.
Sunlight is so reduced in intensity by a layer of dust from
the Mt. Pinatubo eruption that the disc of the sun has not
saturated the film. The strong, blue-white layer indicates
reflectance of sunlight from the mesosphere; the red layers
indicate sun's reflectance in the troposphere. A major
purpose of this shuttle mission was to observe the Earth's
atmosphere.

No LABEL - Global wind circulation graphic
Let's briefly look at global wind circulation. If there's
one point to get from this slide is that the global wind
circulation is caused by the Earth's atmosphere trying to
come to thermal equilibrium. In other words, the heating at
the equator and cooling at the poles is the driver for the
general global wind circulation. The heating at the equator
begins the circulation process of three Hadley cells (named
after the person who thought of the theory). The heated air
rises and moves poleward. There is not much air flow at the
equator so this area is called the equatorial doldrums. The
air cools (around 27 deg N and 32 deg S), then sinks. As
the air sinks a portion of the air moves equatorward and
turns clockwise, due to the Coriolus affect, forming the
tradewinds (NE in northern and SE in southern hemisphere).
A portion of the sinking air moves poleward and also turns
clockwise creating the Westerlies. The northern extent of
this cell where the air begins to rise (due to overriding
the more dense polar air) is variable but is around 45 to
50 deg N. The area where the sinking air from the equator
diverges poleward and equatorward is called the Horse
latitudes or the subtropical calm area. Here the wind tends
to be calm because they are in the middle of a high pressure
system established by the Hadley cell circulation. The third
Hadley cell is over the Poles and is formed by cold air
sinking, moving equatorward, warming up than rising.
At the latitudes where the Hadley cells interface there are
Jet Streams. The subtropical jet is at 27 deg N and 32 deg
S at an altitude around 12 km (40000 ft or 200 mb). Its core
speed is about 140 kts. You can see why it takes longer to
ride in an airplane against the jet stream rather than with
it. The subtropical jet streams strength increases with
heating at The Equator or by cold air being transported from
Mid-latitudes. The Polar Jet Stream is around 45 deg N and
S with a wide variation. Its altitude of maximum wind (100
to 150 kts) is about 9 km (30,000 ft or 300 Mb). The polar
jet streams strength increases as the thermal gradient
across the polar front zone increases.
Note the positions of the features on this graphic and
locate them on the following slide of the Earth.

This sunrise (18.5N, 114.5W) was photographed in the vicinity of Pecos, Texas from an altitude of about 155 nautical miles. From this view, much of the solar energy is scattered by the residue from the Philippine's Mt. Pinatubo volcanic eruption in June 1991. The dark band of aerosols extending across the image, through which the sun is visible, consist primarily of sulfuric acid crystals that scatters the incoming sunlight.