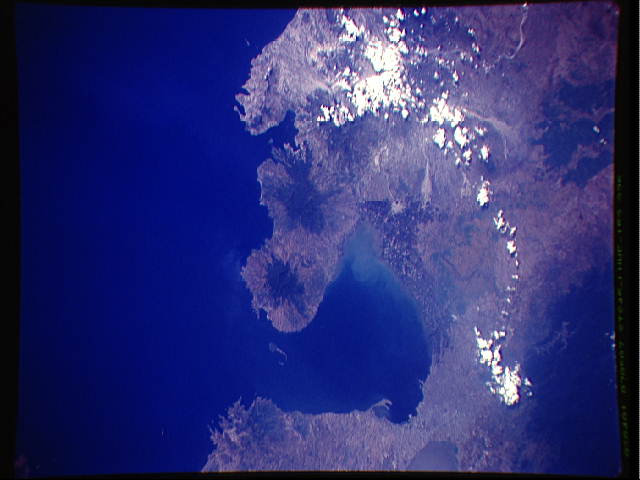 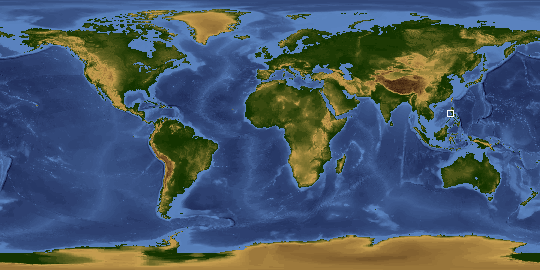 Other options available:
Download Packaged File
Download a Google Earth KML for this Image
View photo footprint information
Download a GeoTIFF for this photo
Image Caption:
STS045-152-275: Manila Bay and Mt. Pinatubo (S03-10-567 com-
parison slide) This photograph centers on Manila Bay in the Phi-
lippines. The city of Manila is at the bottom of the photograph,
and many details of the city are easily identified, including the
harbors on either side of the long jetty. Malacaang Palace, the
residence of Philippine President Aquino, lies just to the east
of the harbor along the Pasig River. The tadpole- shaped island
of Corregidor sits at the mouth of Manila Bay.

A chain of large volcanoes extends north from Manila Bay. The
northernmost volcano, which is partly covered by a pocket of
clouds (at the top of the picture), is Mt. Pinatubo, which erupt-
ed catastrophically in June 1991. The area covered by ash from
the eruption surrounds the mountain, especially to the west to-
ward the sea. All the rivers draining the area have been widened
and are now clogged with ash. Note the large white patches along
the rivers flowing eastward and toward Manila: these are regions
where volcanic mud and debris were dumped by the rivers at the
base of steeper mountain slopes. The ash- and debris-choked
rivers are metastable and represent a continuous hazard for mud-
flows. This condition is likely to continue for several years.


Mt. Pinatubo on the island of Luzon (14.5N, 120.5E) erupted catastrophically in June 1991 after over 600 years of inactivity. Partially obscured by clouds in this post eruption photo, the crater is not obvious in this scene but the blowout area, in the once heavily forested region, is easily observed as lava flow, ash fallout, mud slide and debris trails mar the landscape. Clark AFB, once the crossroads of the SW Pacific can only partially be seen.