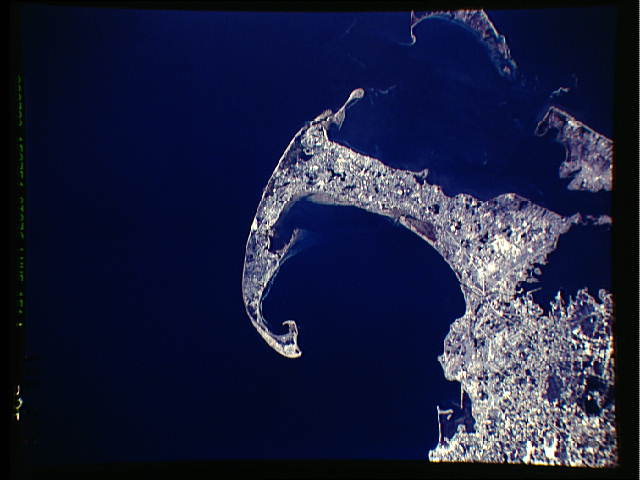 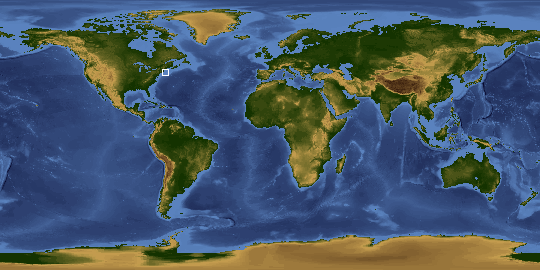 Other options available:
Download Packaged File
Download a Google Earth KML for this Image
View photo footprint information
Image Caption:
S36-151-225: Cape Cod Cape Cod is a classic glacial landform
created during the last period of glaciation as an end moraine (a
mound of rocks and other sediment pushed out at the end of the
glacier) and outwash plain (sediments deposited by meltwater
streams running from under and in front of the glacier). The
piled up gravel-rich sediments have since been eroded and redepo-
sited by wave action to form the sandbars and distinctive shape
of Cape Cod. Another classic glacial feature can be seen in this
photograph: all of the lakes on the Cape are the result of large
chunks of ice breaking off at the end of the retreating glacier
and becoming stranded in the building sediment of the outwash
plain. As the ice chunks melted, they left behind deep circular
holes in the sediment (called Rkettle holesS) which subsequently
were filled with water to become lakes.

Beach erosion has become prime concern on Cape Cod, especially
along the outer reaches of the Cape, from the RelbowS at Chatham
to the RknucklesS at Provincetown. A recent breach (early 1980s)
of the barrier island near the elbow is obvious on this slide;
other parts of the beach have suffered hundreds of feet of ero-
sion in recent years.

Beautiful examples of tidal lagoons can be seen on the north
coast of the Cape and the east coast (north of the elbow).
Streaks in the water are suspended sediment; waves break on some
shoals between the Cape and the islands (Nantucket and Martha's
Vineyard) to the south.


Cape Cod, Massachusetts, USA (42.0N, 70.0W) is a national seashore recreation area with many fine resorts and summer estate homes. Geologically, the cape is a deposit of earth and stone called a terminal moraine, left by the great Pleistocene glaciers of about 20,000 years ago. The through canal at the base of the cape is a manmade feature for waterborne traffic and is part of the Intercoastal Canal network. The cape actually begins south of the canal.