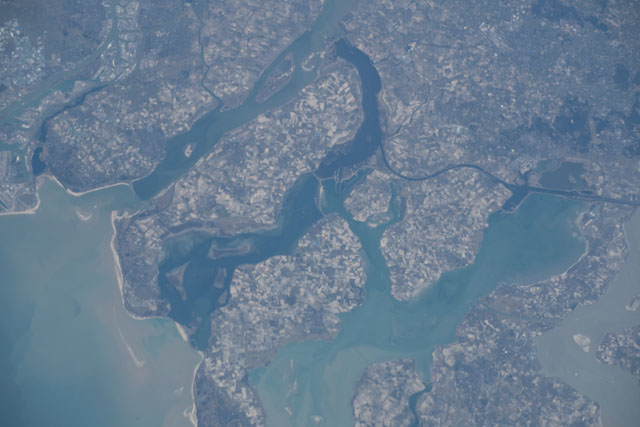 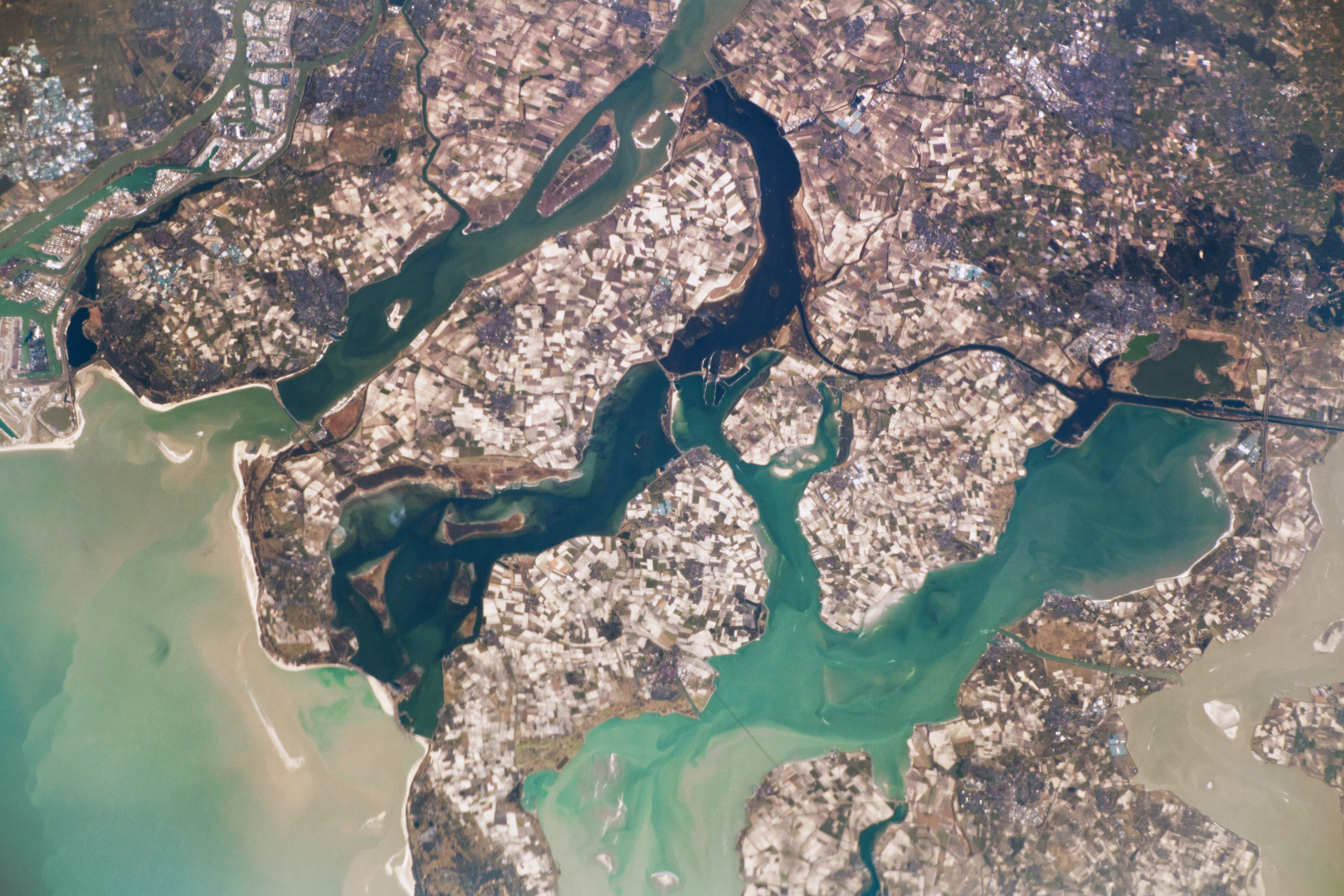 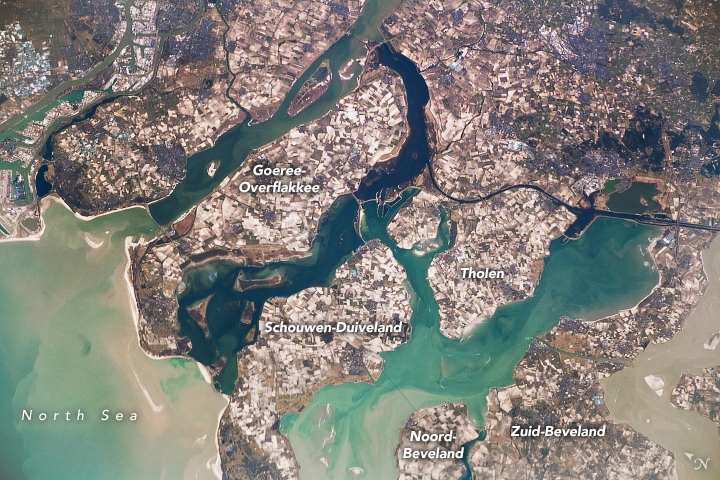 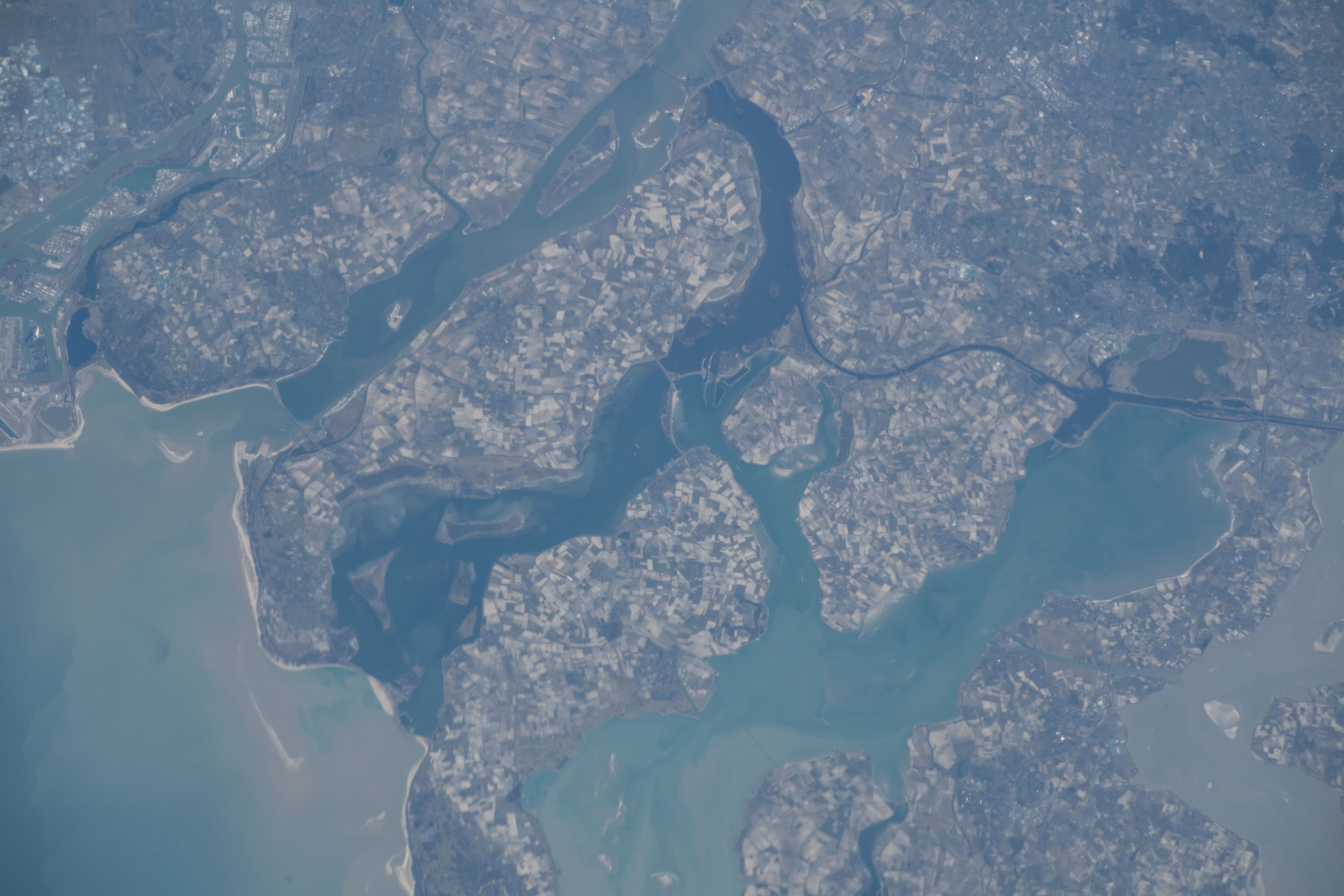 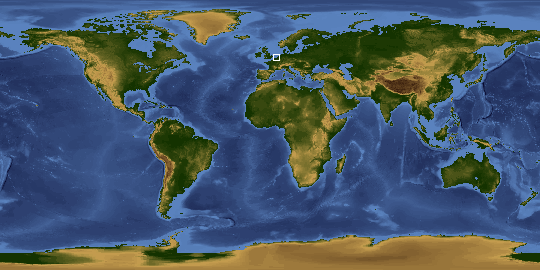 Other options available:
Download Packaged File
Download a Google Earth KML for this Image
View photo footprint information
Download a GeoTIFF for this photo
Image Caption: Fighting Back the Sea

The Rhine-Meuse-Scheldt delta (//www.delta-alliance.org/deltas/rhine-meuse-delta) along the southern coast of the Netherlands was captured in this
photograph taken by an astronaut aboard the International Space Station.

Located about 80 kilometers (50 miles) southwest of Amsterdam, this system of islands, peninsulas, and waterways was once the site of a disastrous event: the North Sea Flood of 1953. On the night of January 31, 1953, a combination of storm-force winds and the spring tide created a storm surge that ravaged the low-lying
coastal regions. The islands of Goeree-Overflakkee, Schouwen-Duiveland, Tholen, Noord-Beveland, and Zuid-Beveland, which all have an average elevation below sea, suffered extensive flooding. High water lasted for more than 24 hours and took the lives of thousands of people, tens of thousands of livestock, and severely damaged infrastructure and farmland over an area of 1500 square kilometers (600 square miles), about half the size of Rhode Island.

Engineers had anticipated such a flood. In the late 1930s, the Rijkswaterstaat (Ministry of Infrastructure and Water Management) commissioned studies showing that the sea defenses in the southwest river delta would be unable to withstand a major storm surge. Engineers proposed that all of the river mouths and sea inlets be dammed so the area could become less reliant on sea dikes. However, due to the scale of the project and the outbreak of World War II, construction was put on hold. By the time the flood occurred in 1953, only two river mouths had been closed off and the existing dikes had either been weakened by erosion or a lack of upkeep.

In the aftermath, the Dutch government began repairing flood damage through the use of thousands of workers and military troops from the Netherlands and other countries. Within nine months, the final dike had been repaired on the island of Schouwen-Duiveland. In the following year, the Rijkswaterstaat initiated the Delta Works, a massive project to construct dams, storm surge barriers, and dikes. The final barriers were completed in 1997, and the Delta Works has been