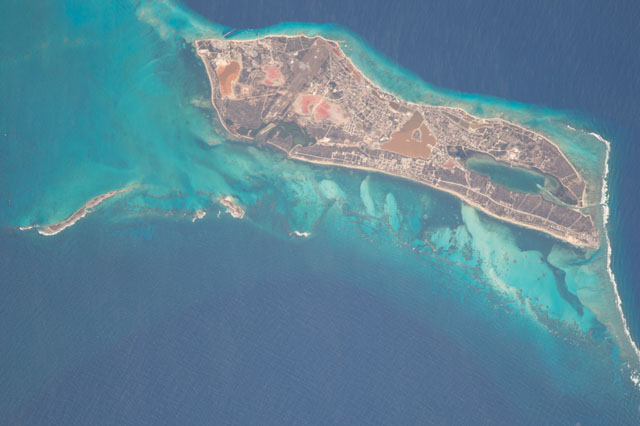 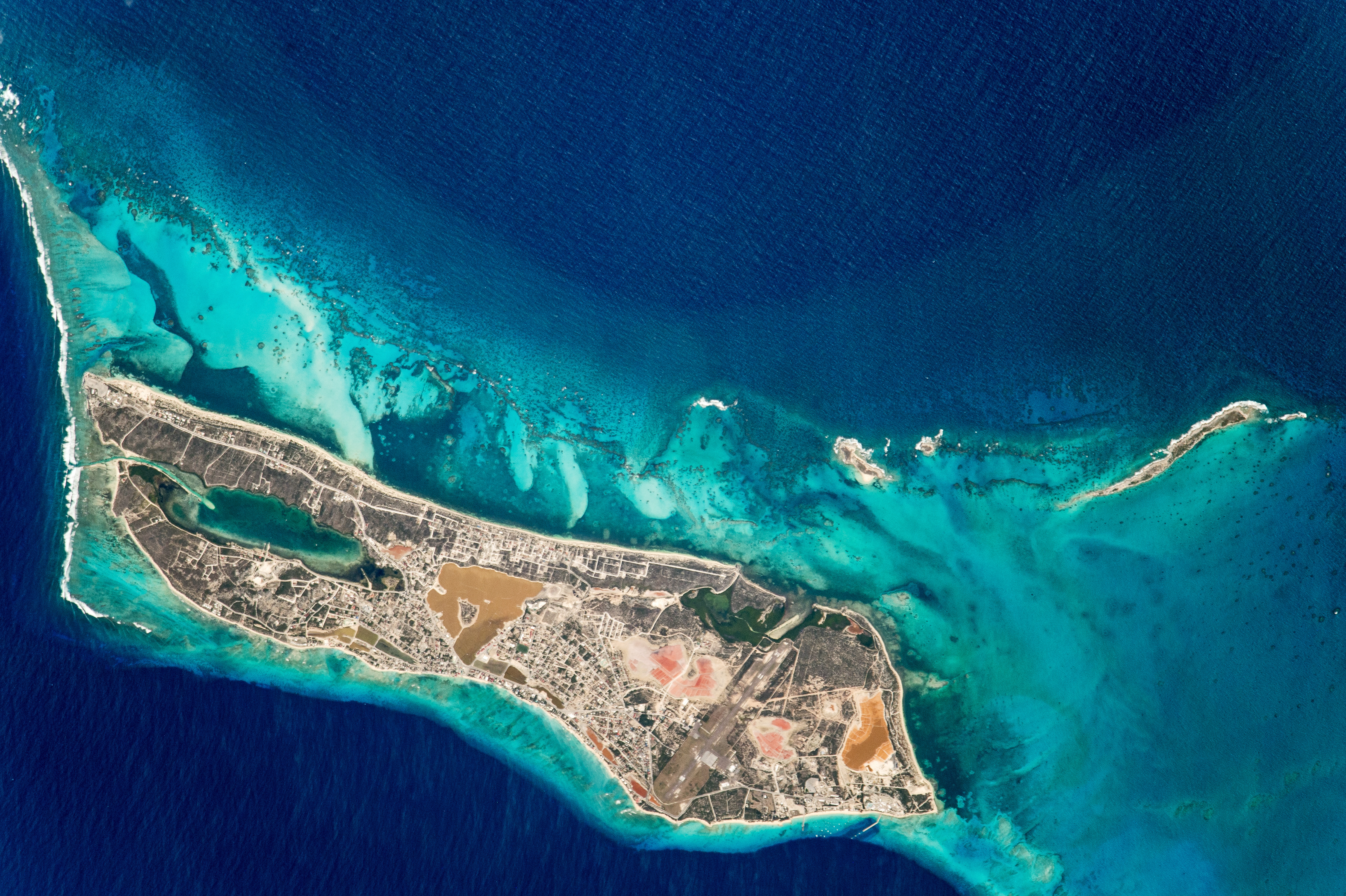 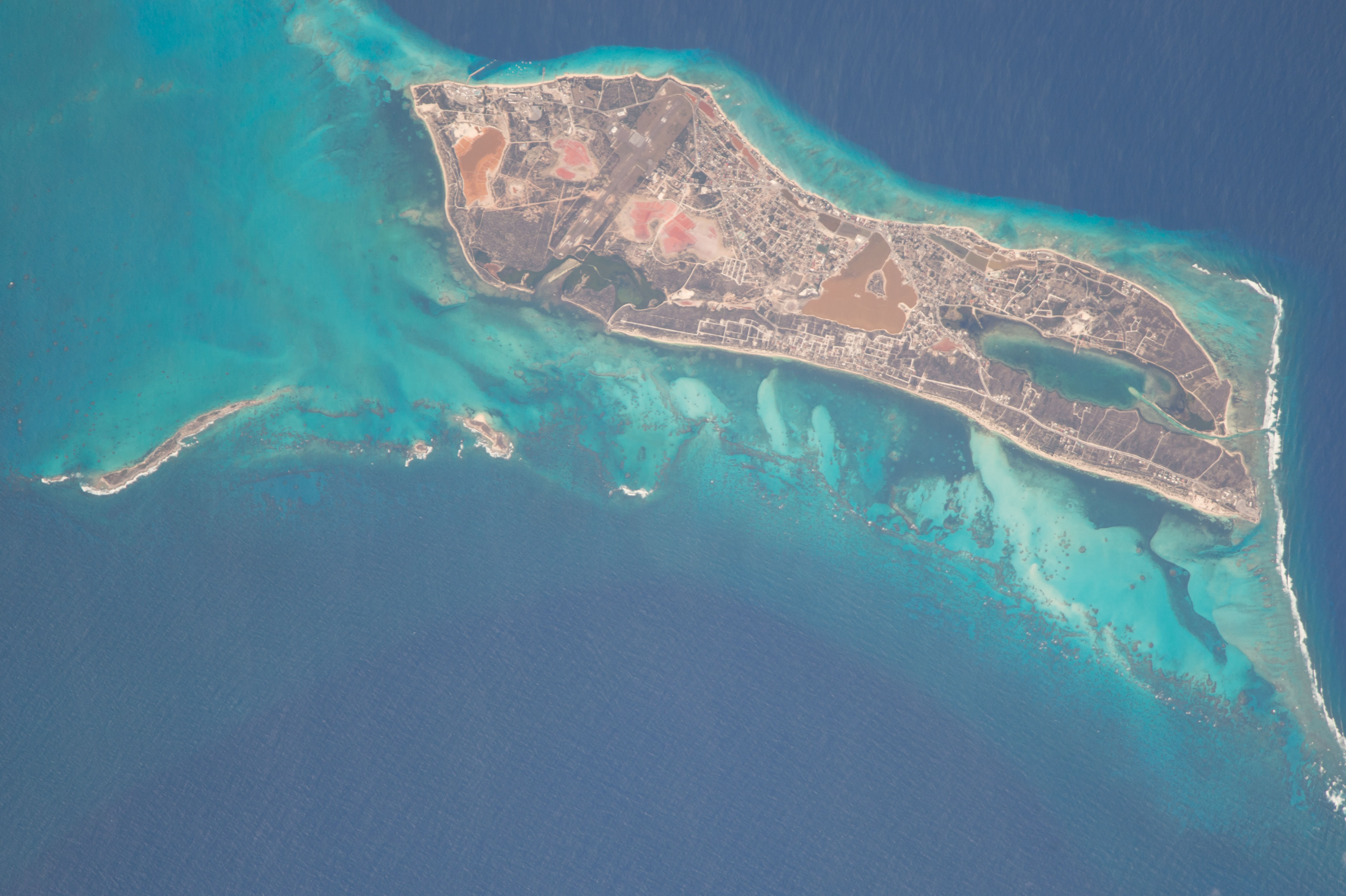 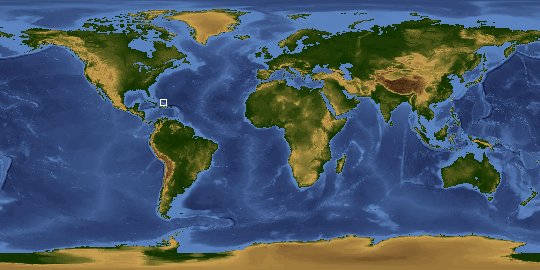 An astronaut aboard the International Space Station took this photograph of Grand Turk Island, situated on the southern end of the Bahamas archipelago in the Turks and Caicos Islands. Grand Turk Island is just 10 kilometers (6 miles) long, and much of the island is occupied by Cockburn Town (population about 5,000), the capital of Turks and Caicos.

Much of the land surface is covered by reddish-brown salt evaporation ponds and a saline lake known as Town Pond, around which Cockburn Town developed. The town was established in 1766 to support the growing salt industry. McCartney Airport, on the southern end of the island, is the largest airport.

Grand Turk sits on a large carbonate bank, which is almost double the size of the island. Waves breaking against the carbonate platform appear as a white line along the left margin of the image. The complex patterns on the east coast of Grand Turk (top of the image) are a fraction of a vast reef ecosystem that stretches discontinuously for nearly 1000 kilometers, as far as the northern Bahamas.

The color of the water in this photo tells us something about the depth: clear, shallow water is electric blue where the light-toned sands almost meet the surface; deeper blues indicate deeper water. The darkest blues indicate the deep ocean (lower left) and the Columbus Passage. Dipping at least 2150 meter (7,000 feet) in depth, the passage is known to divers for majestic underwater caverns, coral gardens, and black-coral formations. Tourists visit the passage every January through March to watch thousands of Atlantic humpback whales migrate to their mating grounds.

Grand Turk Island has an important historical connection to NASA and the United States. The first crewed orbital mission of the United States was launched with John Glenn piloting the Friendship 7 spacecraft in 1962. He successfully orbited the Earth three times and, after various complications, splashed down in the vicinity of Grand Turk Island. Glenn was taken to Cockburn Town for several days for medical checkups and debriefing.