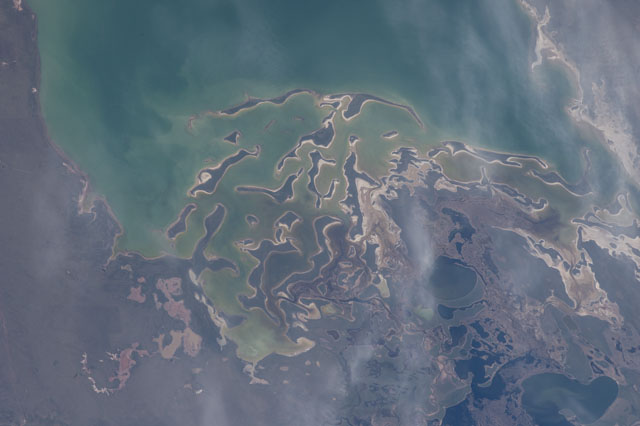 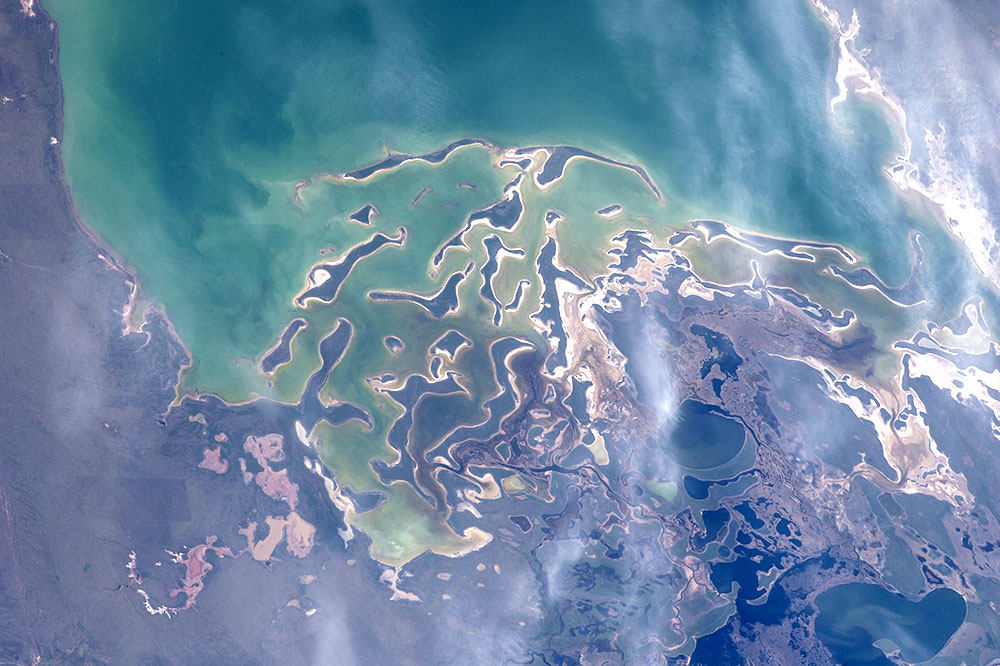 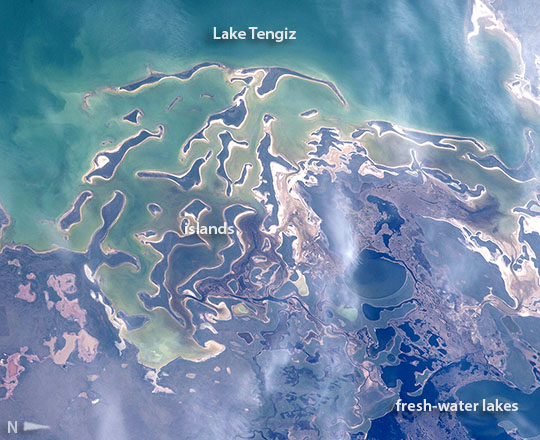 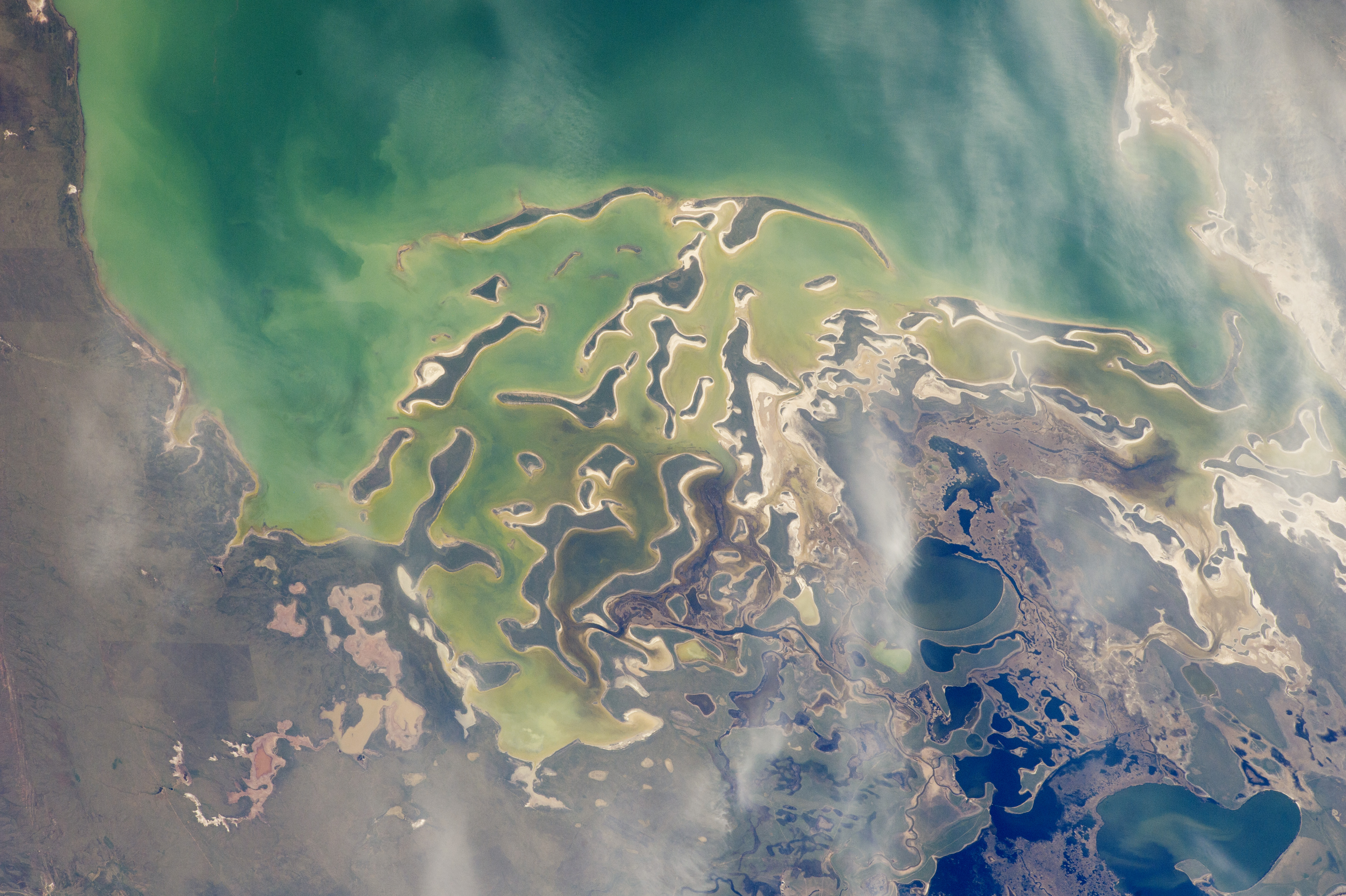 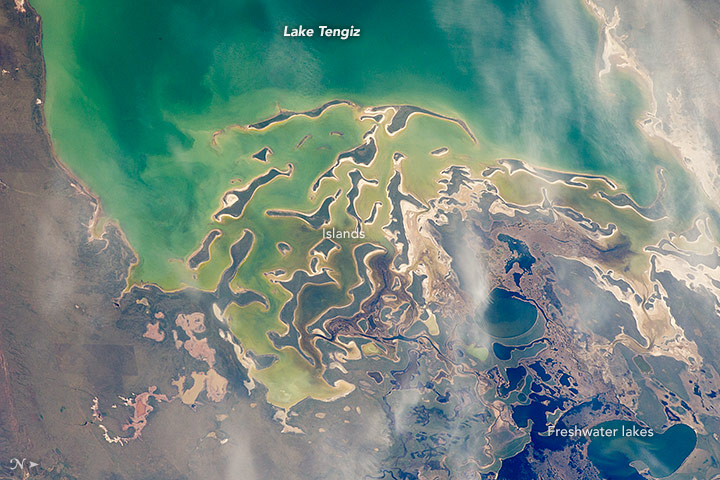 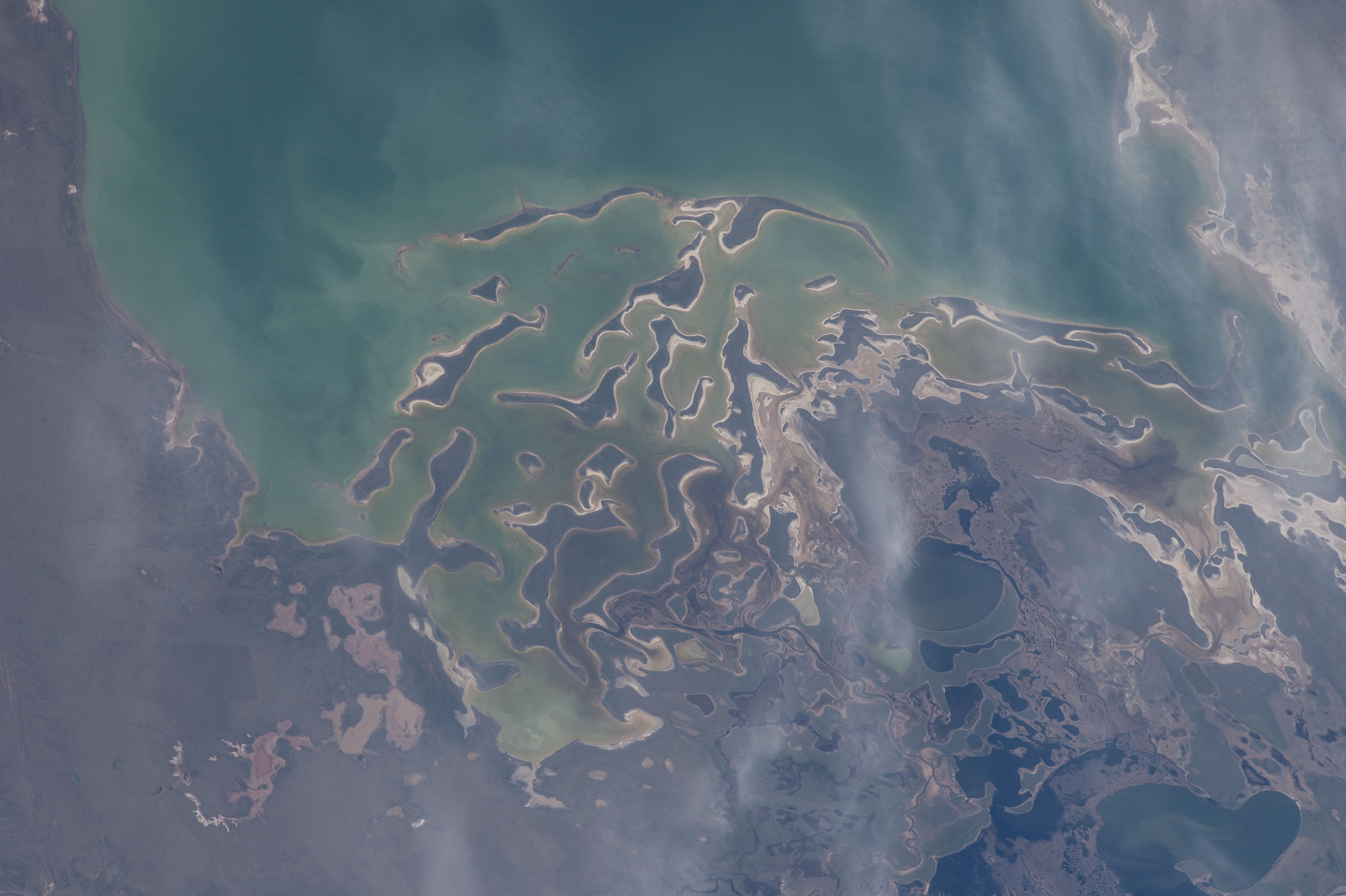 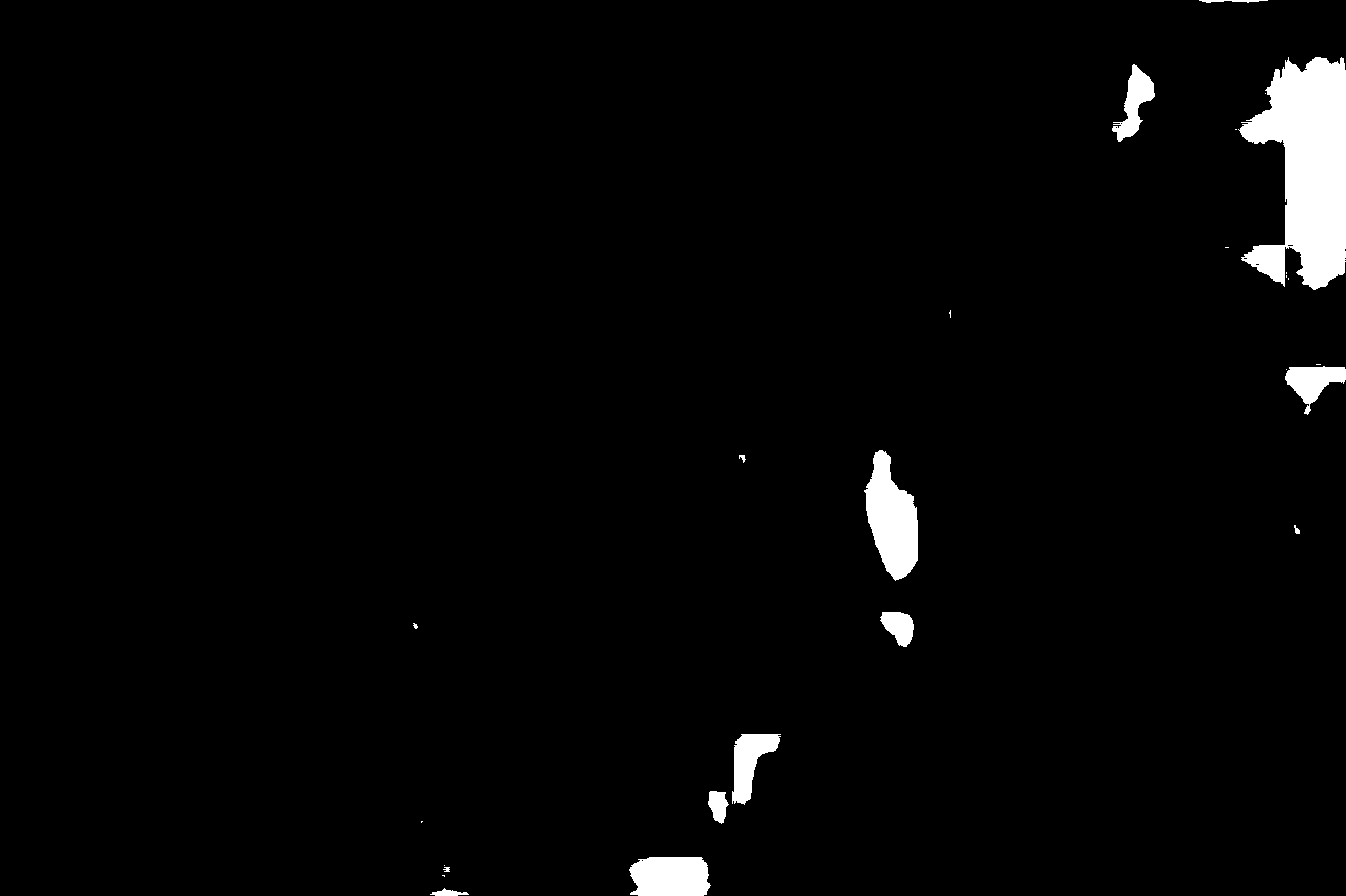 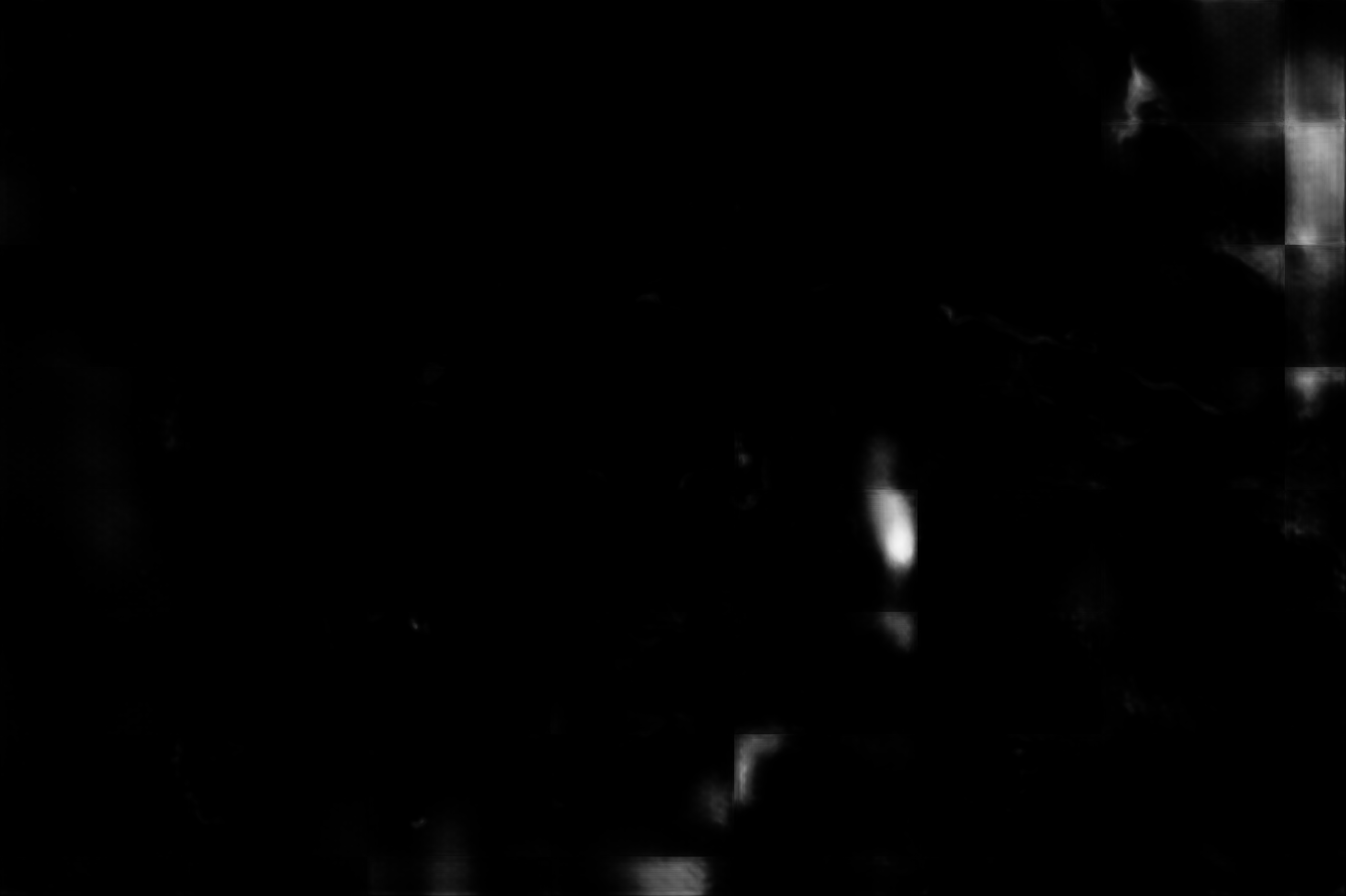 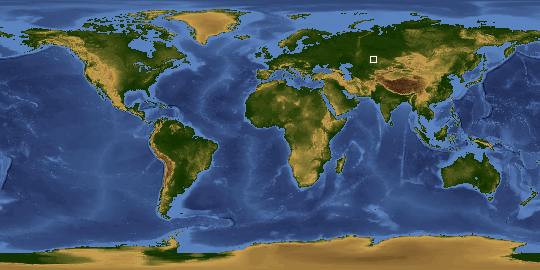 In orbit above the almost featureless expanses of the semidesert grasslands of Kazakhstan, a crew member aboard the International Space Station focused on one of the few features that really stands out. Lake Tengiz is the only large lake (1590 square km, 615 square miles) in northern Kazakhstan. Through white wisps of cloud (right half of image) the crew imaged the 50 km-long eastern shore of the lake, marked by islands whose thin, winding shapes with white beaches are almost unique on the planet.

The islands and numerous intervening waterways make a rich habitat for birds in this part of Asia. The lake has been declared a RAMSAR wetland site of international importance, with 318 species of birds identified at the lake, 22 of which are endangered. This is the northernmost habitat of the pink flamingo. The lake system is Kazakhstan's first UNESCO World Heritage Site.

Part of the richness of the site is its complex hydrology. Fresh water enters the system via the Kulanutpes River, so that local small lakes (at image lower right) are freshwater lakes. But in this closed basin, the water in the main lake slowly evaporates, becoming salty. Wind stirs up bigger waves on the main lake and this disperses sediment and salt making the water a cloudier and lighter blue color.

The strange shape of the islands is not easy to interpret. The islands may be drowned remnants of delta distributaries of the Kulanutpes River. Westerly winds probably have a strong effect in smoothing the shorelines, especially in a shallow lake like Tengiz which is only about 6 m (20 feet) deep.

The lake has an exciting history for people who follow space exploration. In 1976 a Soyuz spacecraft landed in the lake, somewhere near the north shore (at image top right). The capsule crashed through the ice and sank, all during an October snowstorm with temperatures at -22degC. It was many hours before the airtight capsule was located, so that divers could attach flotation tanks to get the capsule to the surface. It was then dragged ashore across the ice by helicopter. The rescue effort took nine hours before the crew was able to safely exit the capsule. Because of low power the capsule was unheated and the crew had been feared lost.