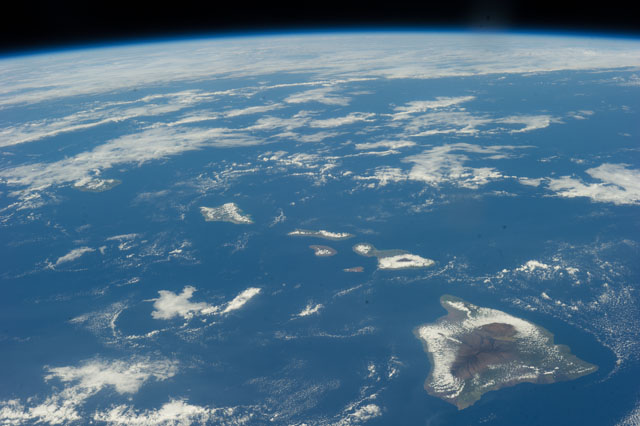 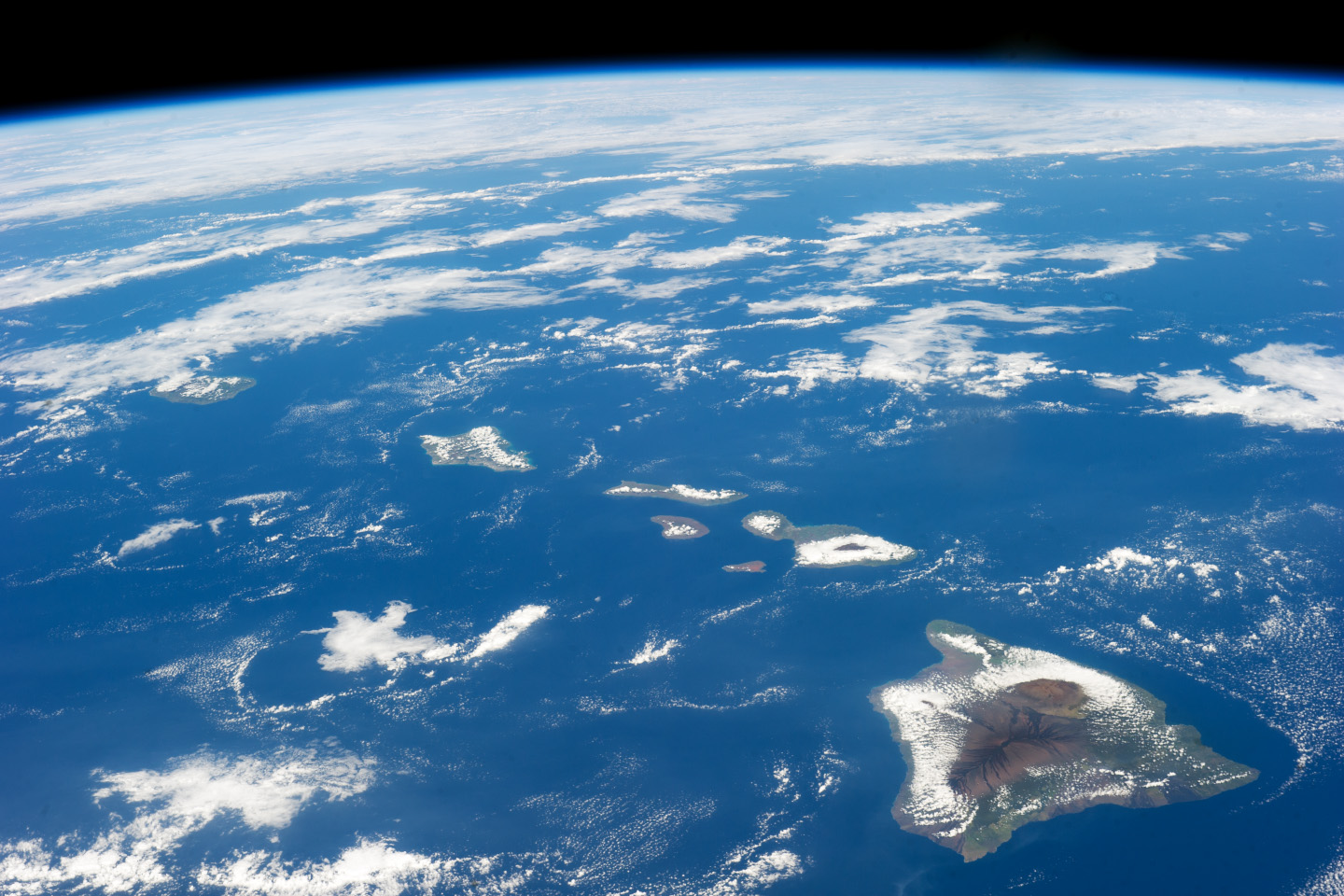 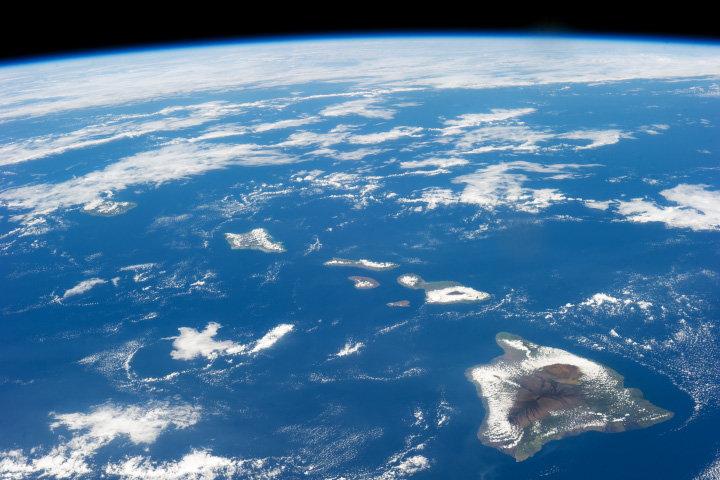 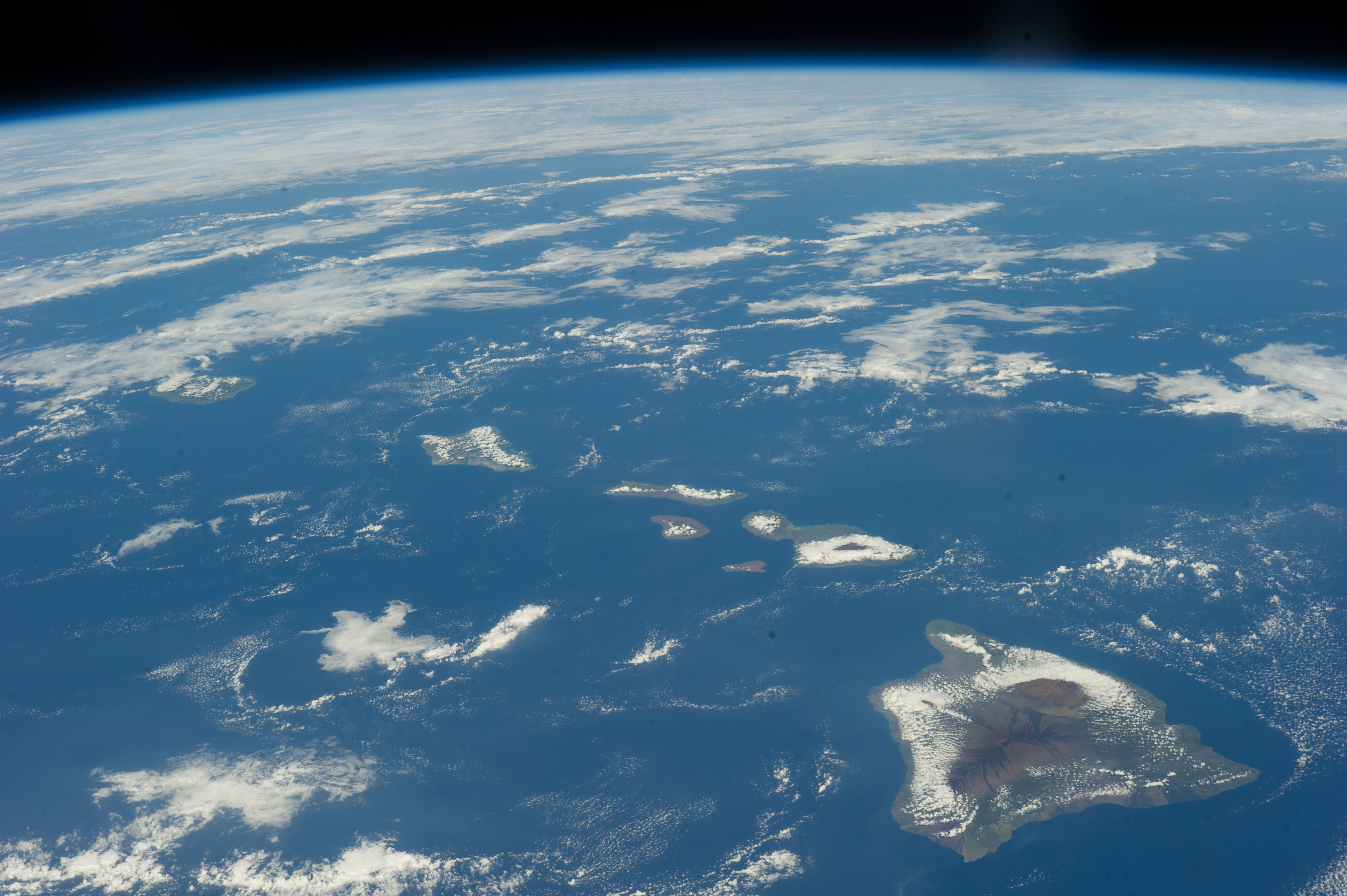 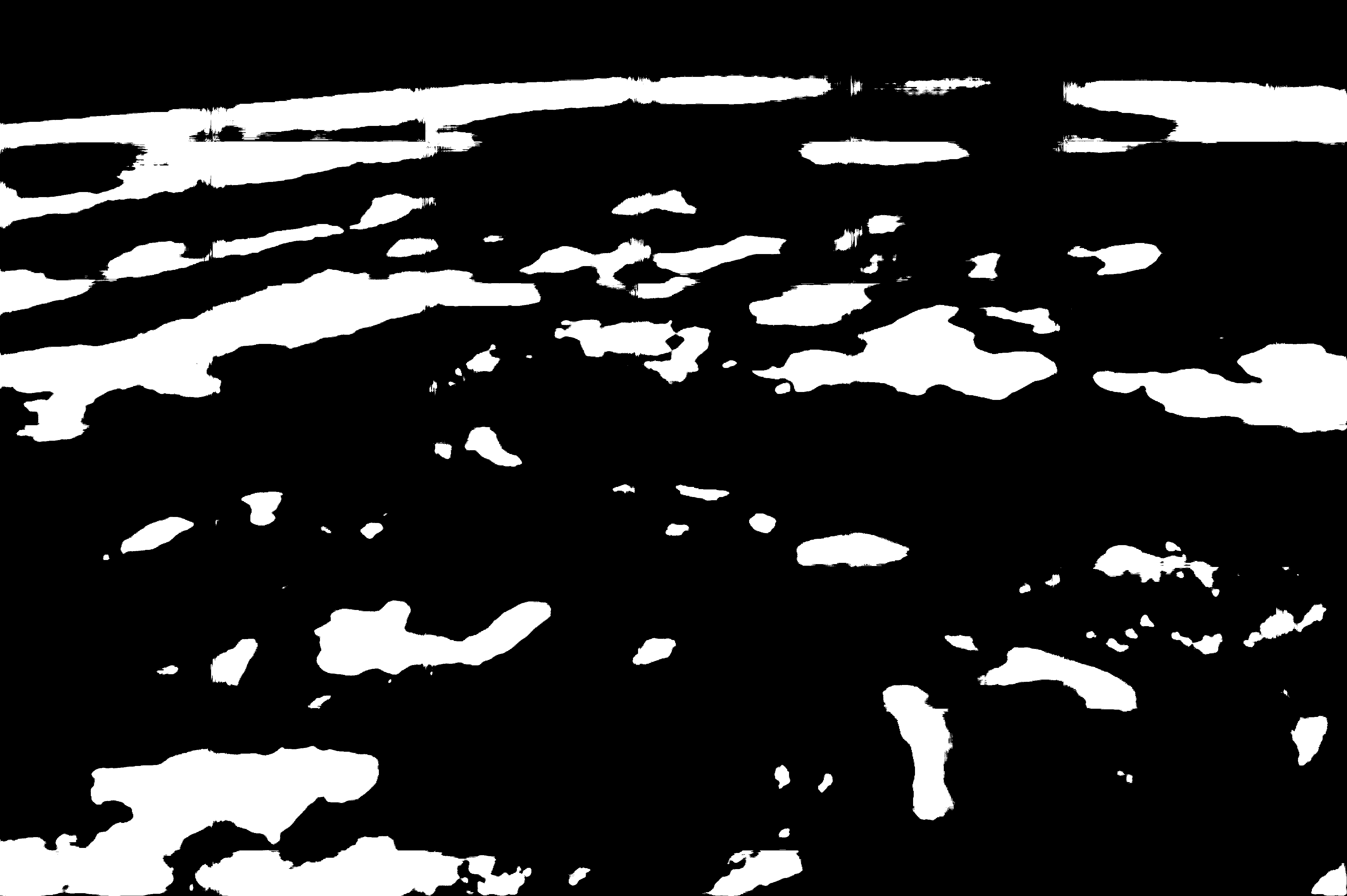 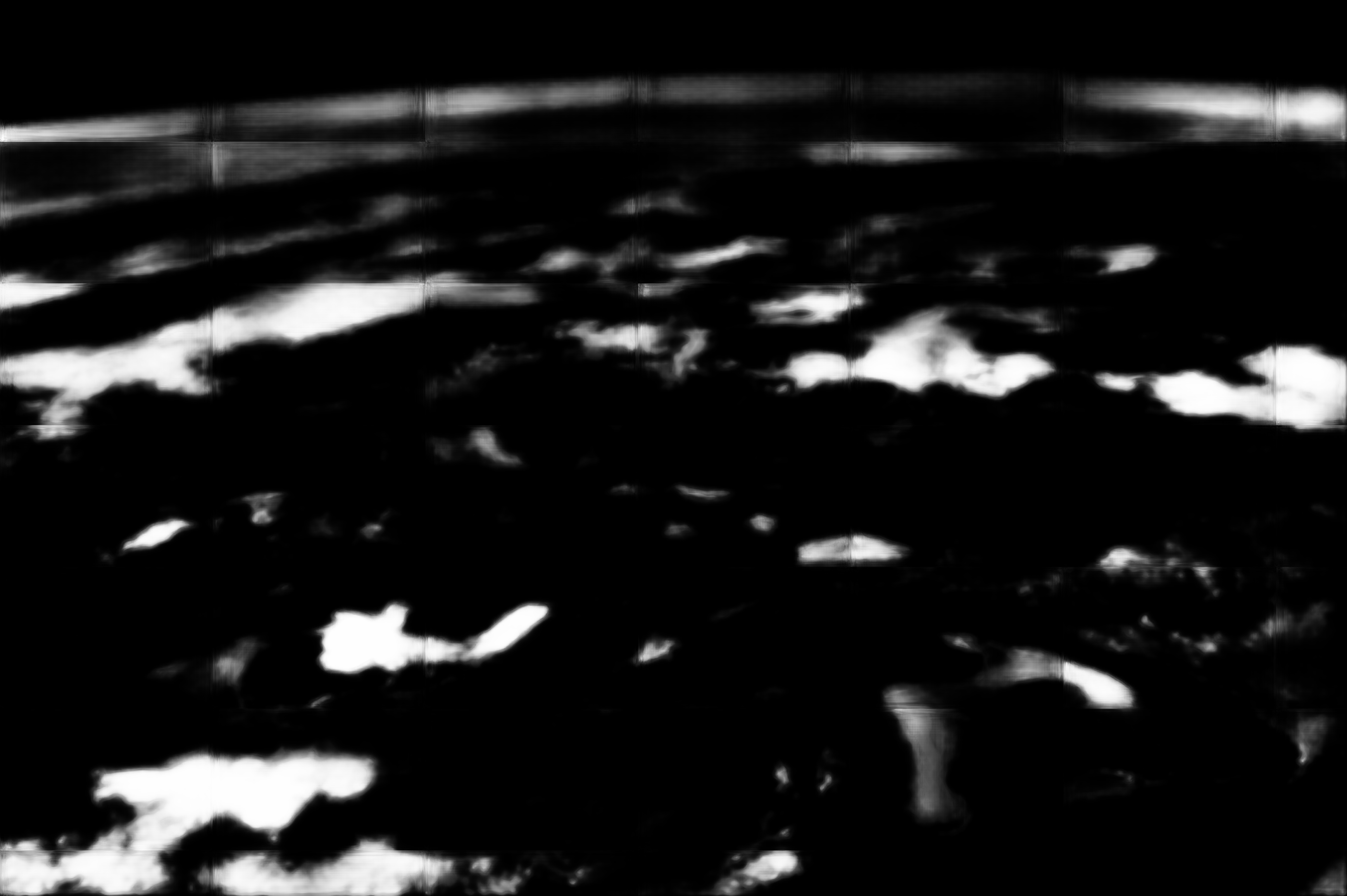 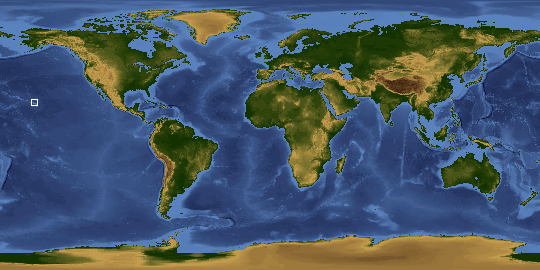 If anyone has an easy job, it is the Hawaii tourism authority, the organization responsible for promoting the island as a tourist destination. Using language such as "lush rain forests" and "black sand beaches," they sum up the Island of Hawaii as a "vast canvas of environments."

The words are the perfect description for the top image, captured by the Moderate Resolution Imaging Spectroradiometer (MODIS) on NASA's Terra satellite on January 26, 2014. The remarkably cloud-free view shows the range of ecological diversity present on the island. The lower image, an astronaut photograph, shows the island in context. At 10,432 square kilometers (4,028 square miles), the Island of Hawaii is nearly twice as big as all of the other islands combined.

Many of the world's climate zones can be found on Hawaii for two related reasons: rainfall and altitude. The Big Island is home to Mauna Kea, the tallest sea mountain in the world at 4,205 meters (13,796 feet) and the tallest mountain on the planet - if you measure from seafloor to summit, a distance of more than 9,800 meters (32,000 feet).

Despite Mauna Kea's height, it is Mauna Loa that dominates the island. With an altitude of about 4,169 meters (13,678 feet)- the actual number varies depending on volcanic activity - Mauna Loa is the most massive mountain in the world. Temperatures dip low at the summit of these peaks, resulting in a tree-free polar tundra, pale brown in this image.

The mountains help shape rainfall patterns on Hawaii so that desert landscapes exist side-by-side with rainforests. In fact, average yearly rainfall ranges from 204 millimeters (8 inches) to 10,271 mm (404 inches). Trade winds blow mostly from the east-northeast, and the sea-level breezes hit the mountains and get forced up, forming rainclouds. The east side of the island is lush and green with tropical rainforest. Much less moisture makes it to the lee side of the mountains. The northwestern shores of Hawaii are desert. Kona, on the western shore, receives plenty of rain because the trade winds curve back around the mountains and bring rain. Pale green areas on all sides of the island are agricultural land and grassland.

The other environmental force painting Hawaii's canvas is volcanism. Mauna Loa and Mauna Kea are both volcanic, though only Mauna Loa has been active recently. However, in this department, Kilauea is the superlative: It is one of the world's most active volcanoes. A small puff of steam rises from an erupting vent in this image. Black and dark brown lava flows extend from both Kilauea and Mauna Loa.

Interested in other sunny island destinations? Be sure to visit the Earth Observatory's latest image gallery, Islands in the Sun.