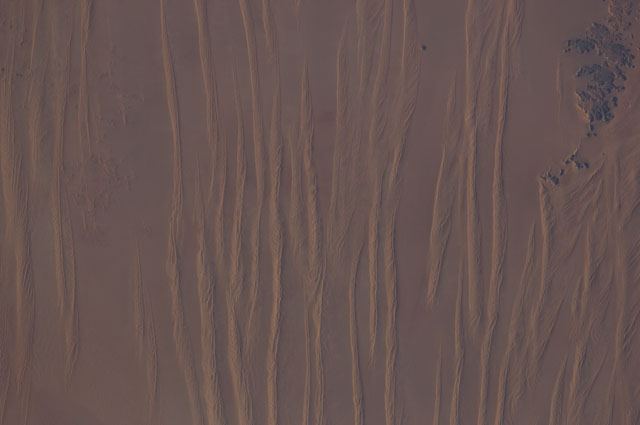 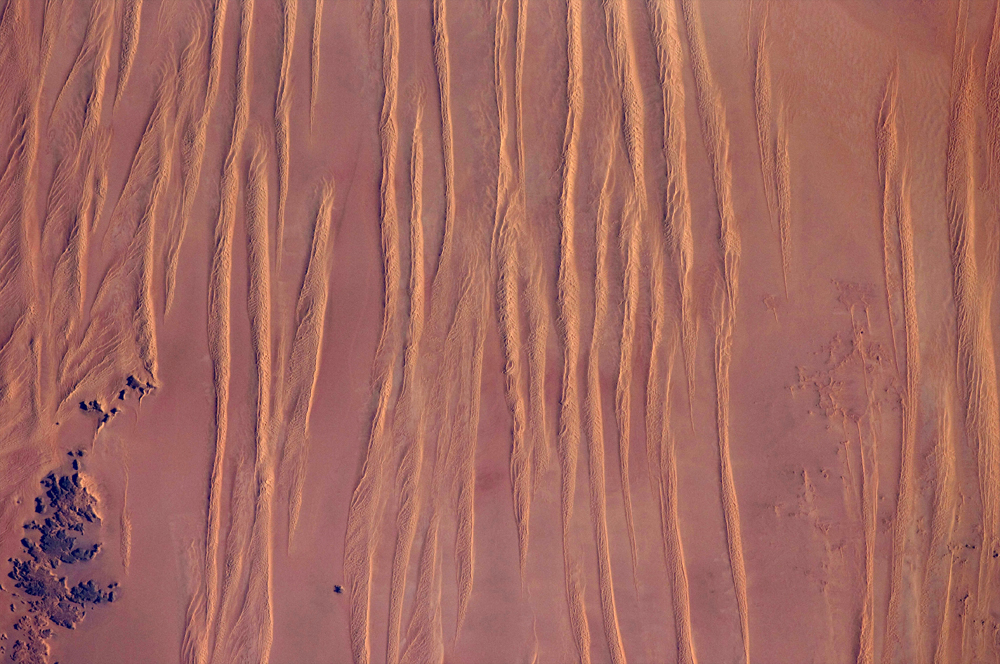 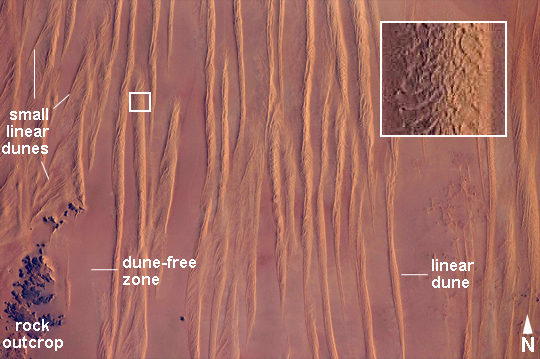 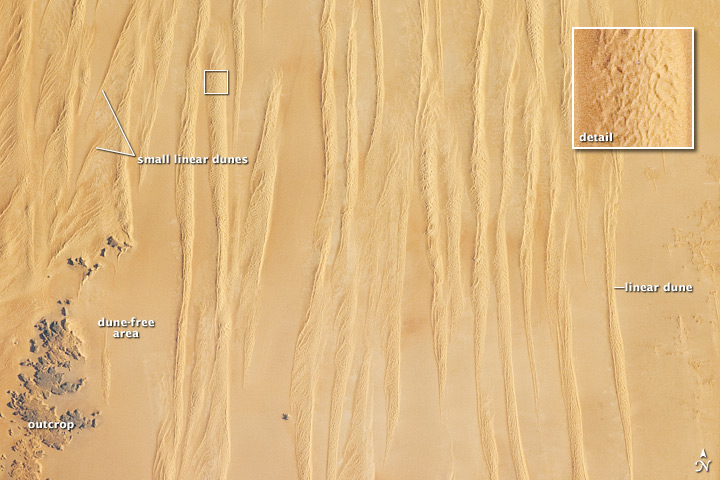 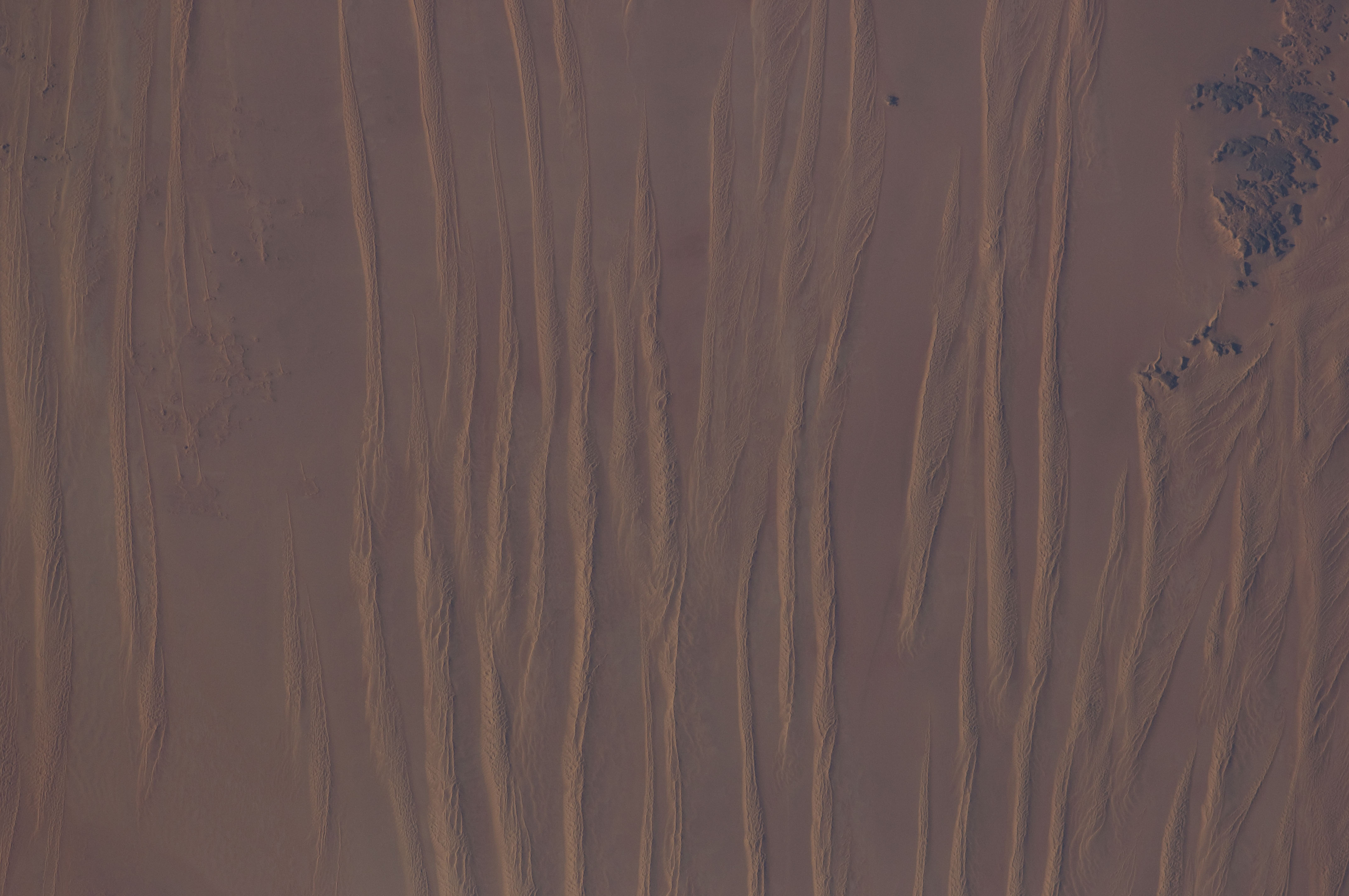 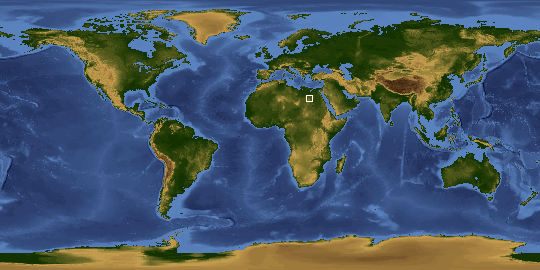 In southwestern Egypt, deep in the Sahara Desert, the action of wind dominates landscapes today much as it has done for the past several thousand years. Winds blowing from the north have fashioned sands into large dunes, aligned parallel with these winds. The so-called linear dunes--shown here in the Great Sand Sea of SW Egypt--are easily seen from space and local maps show that they rise 20-30 meters above the surrounding flat plains. The distance between individual linear dunes is interestingly regular, at 1.5-2.5 km, suggesting some equilibrium exists between the formative wind strength and the sand supply. It is possible that linear dunes may relate to earlier times when winds were stronger than they are today, or sand more plentiful.

The dark patch of rock outcrop at image lower left sticks up above the surface on which the dunes lie by as much as 150 m. The north winds have been deflected around this high zone, and smaller secondary linear dunes can be seen along the left side of the image, aligned with local winds that become ever more northeasterly with nearness to the outcrops. A dune-free zone on the protected downwind (south-southeast) side of the outcrop gives a sense of the sand movement (generally from the top of the image towards the bottom).

At first glance, the large linear dunes appear to be the major landform in the image; however a complex pattern of even smaller dunes can be seen perched on top of the largest dunes (inset). It is not uncommon to observe multiple dune forms in large sand seas.

The sand that comprises many dune fields usually derives from some larger river not very distant upwind, supplied from the dry river bed (exposed to the wind during dry seasons of low river flow, or regional change to a more arid climate). Inland dune fields thus lie downwind of the source river. A large, unnamed river once flowed to the Mediterranean Sea situated west of the dunes shown in this picture, dumping its sand load 300 km northwest of the area shown. It is likely that this river, the evidence of which is now almost completely obliterated, was the source of the sand in the linear dunes.