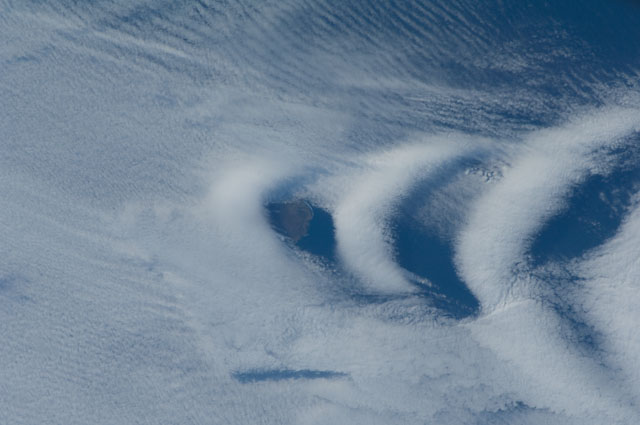 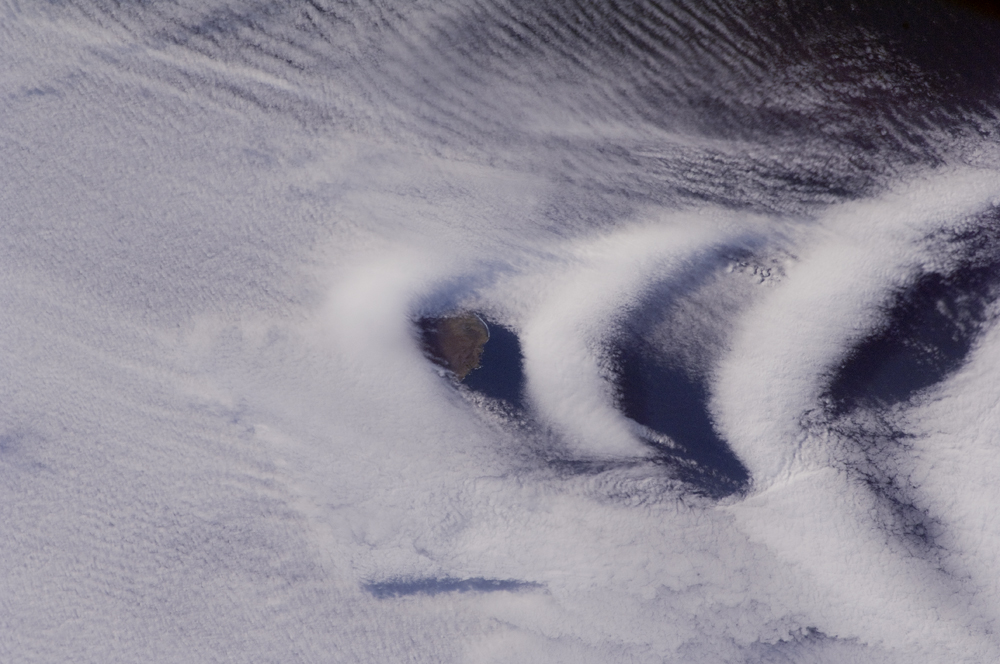 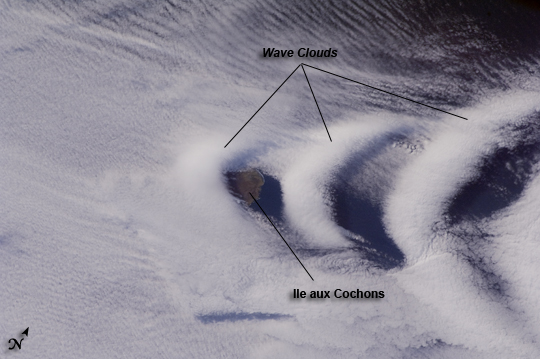 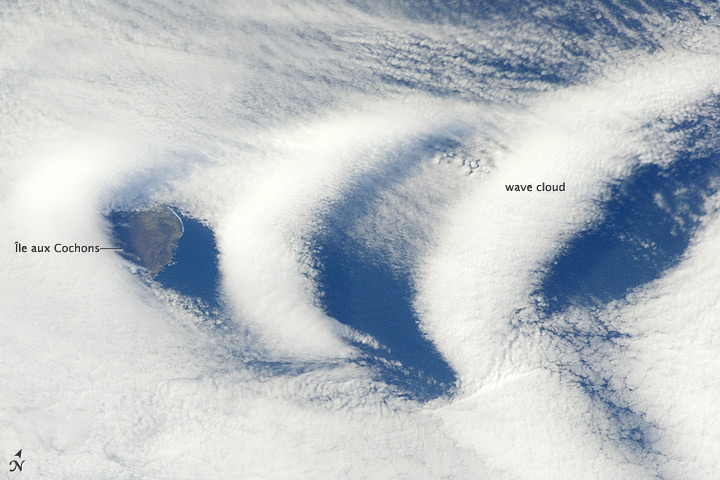 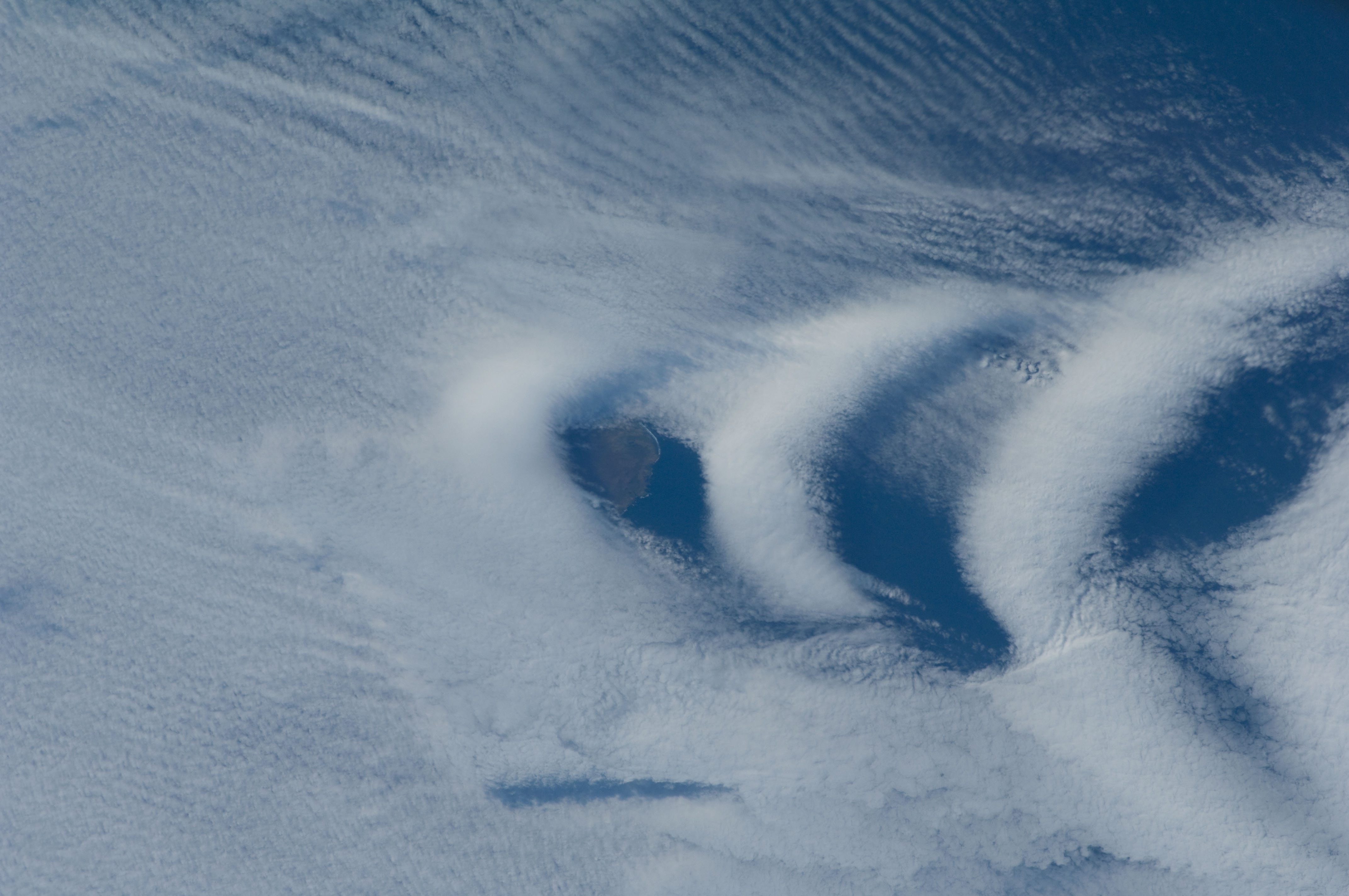 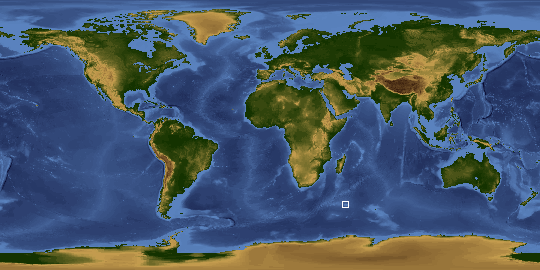 This astronaut photograph from the International Space Station illustrates the formation of wave clouds in the wake--or downwind side--of Ile aux Cochons ("Isle of Pigs") located in the Southern Indian Ocean. The island is approximately located 3000 kilometers southeast of the southern tip of the African continent and 2300 kilometers northwest of Antarctica. The island itself, of which only a part of the eastern coastline is visible at image center, is volcanic in origin with a summit elevation of 775 meters above sea level. The Ile aux Cochons stratovolcano is thought to have erupted within the last 12,000 years, however no historical activity has been recorded.

The summit elevation is high enough for the land surface to interact with cloud layers and winds flowing past the island. Two major cloud layers are visible; a lower, more uniform layer consists of roughly parallel cloud "streets" that suggest a westerly flow pattern of air. When the air mass encounters the Ile aux Cochons, moisture-laden air rises and cools, causing more water vapor to condense into clouds.

As the air mass passes over the summit of Ile aux Cochons and descends, it may encounter alternating moist and dry air layers, enabling the formation of the discontinuous chevron-shaped wave clouds in the wake of the island. While their appearance suggests that the clouds are forming in the wake of the island and moving eastwards, in fact it is the air mass that is moving, with clouds forming in regions of moist air and dissipating in dry regions.

Ile aux Cochons is the westernmost of the islands that form the subantarctic Crozet Archipelago (part of the French Southern and Antarctic Lands). Accept for occasional research visits, the island is uninhabited. The island is an important breeding site for seabirds, including the world's largest King Penguin colony.