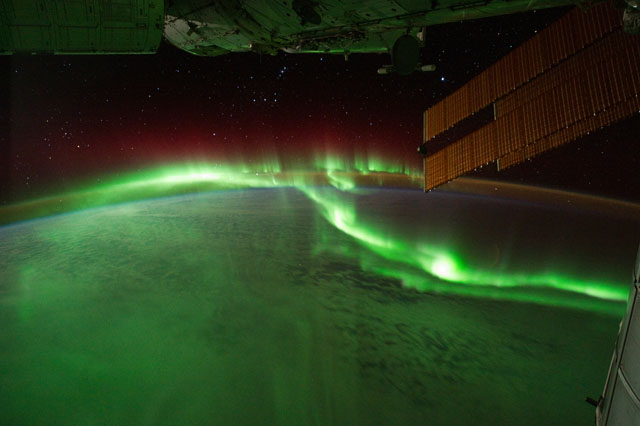 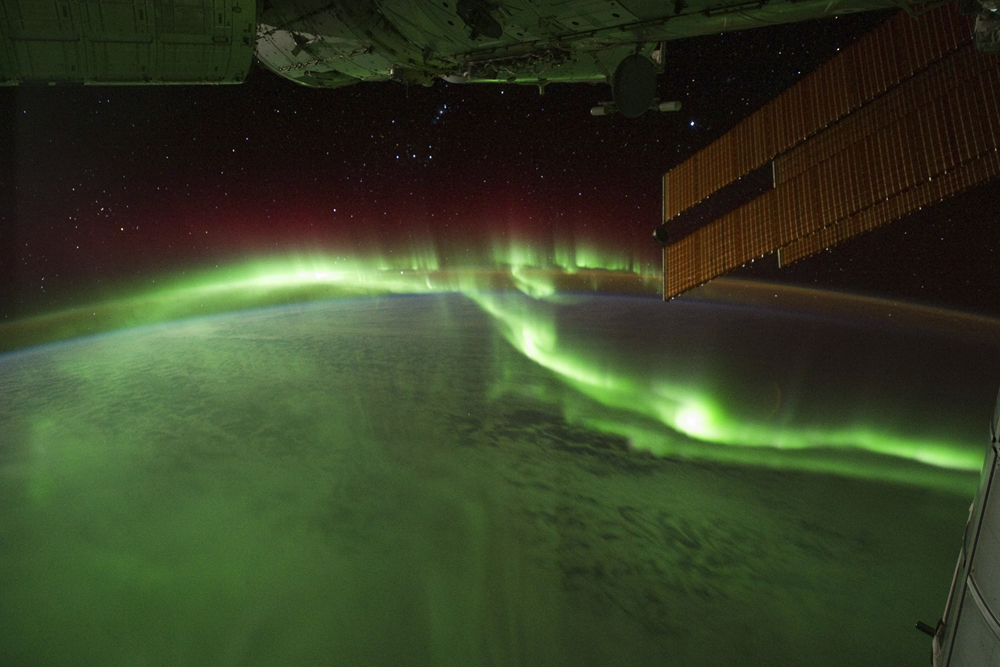 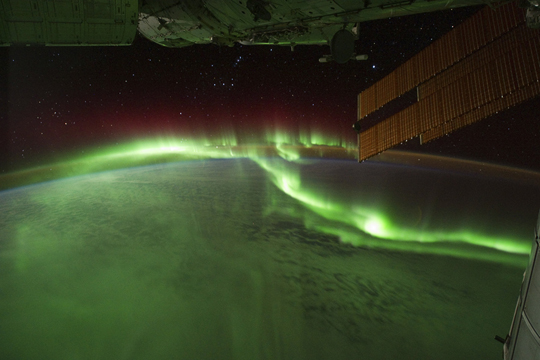 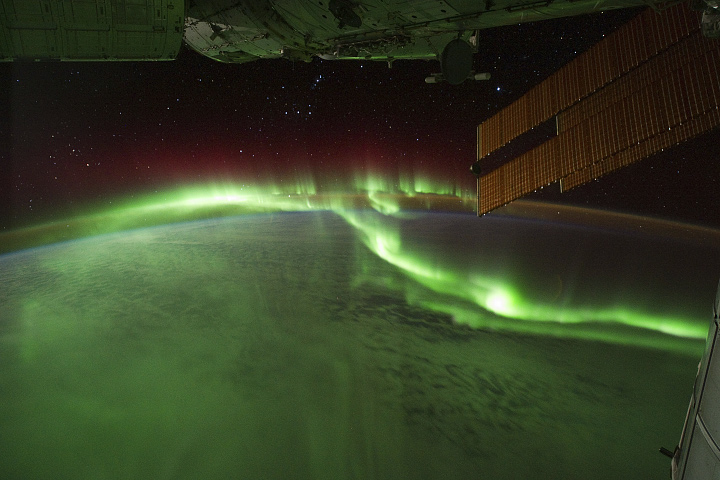 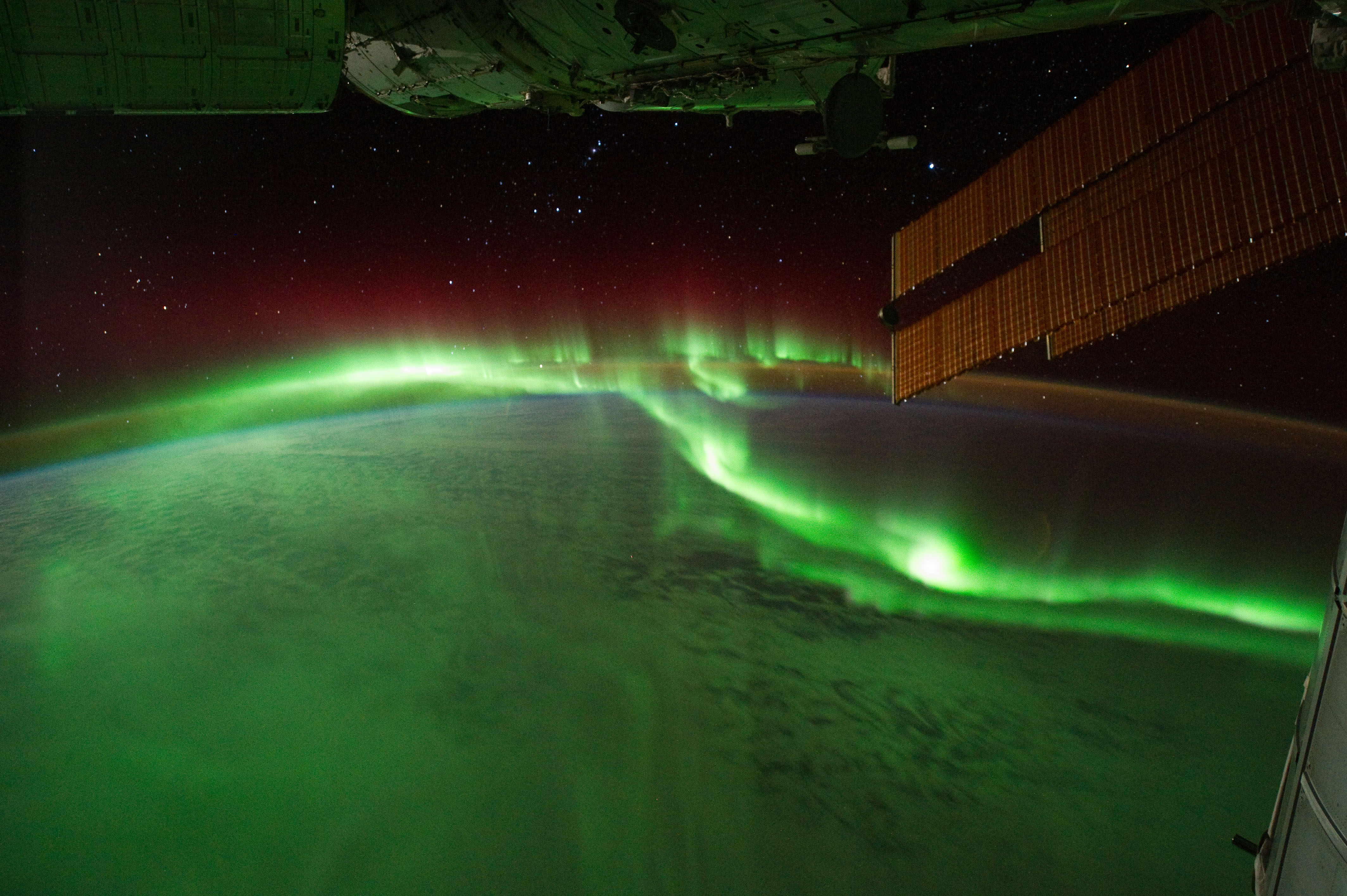 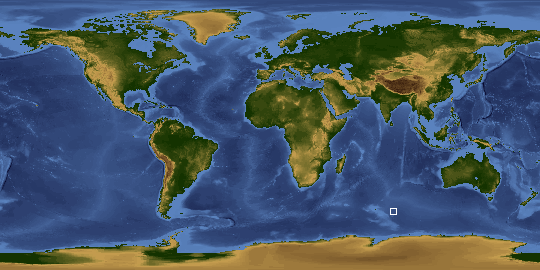 And the skies of night were alive with light, with a throbbing, thrilling flame; Amber and rose and violet, opal and gold it came. It swept the sky like a giant scythe, it quivered back to a wedge; Argently bright, it cleft the night with a wavy golden edge. -- "The Ballad of the Northern Lights"

In describing auroras as he saw them in the far north in 1908, poet Robert Service captured the sense of fluid motion, the vivid color, and the fiery, flame-like qualities one sees from the ground. His description works just as well in the southern hemisphere and when looking down from above.

Astronauts on the International Space Station (ISS) used a digital camera to capture several hundred photographs of the aurora australis, or "southern lights," while passing over the Indian Ocean on September 17, 2011. Solar panels and other sections of the ISS fill some of the upper right side of the photograph.

Auroras are a spectacular sign that our planet is electrically and magnetically connected to the Sun. These light shows are provoked by energy from the Sun and fueled by electrically charged particles trapped in Earth's magnetic field, or magnetosphere. In this case, the space around Earth was stirred up by an explosion of hot, ionized gas from the Sun--a coronal mass ejection--that left the Sun on September 14, 2011.

Fast-moving electrons collide with Earth's upper atmosphere, transferring their energy to oxygen and nitrogen molecules and making them chemically "excited." As the gases return to their normal state, they emit photons, small bursts of energy in the form of light. The color of light reflects the type of molecules releasing it; oxygen molecules and atoms tend to glow green, white or red, while nitrogen tends to be blue or purple. This ghostly light originates at altitudes of 100 to 400 kilometers (60 to 250 miles).