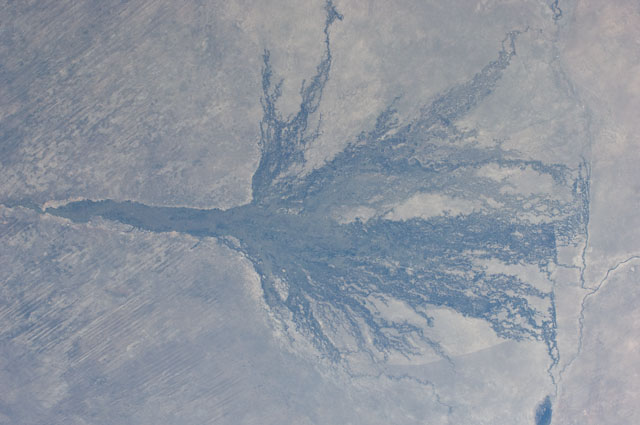 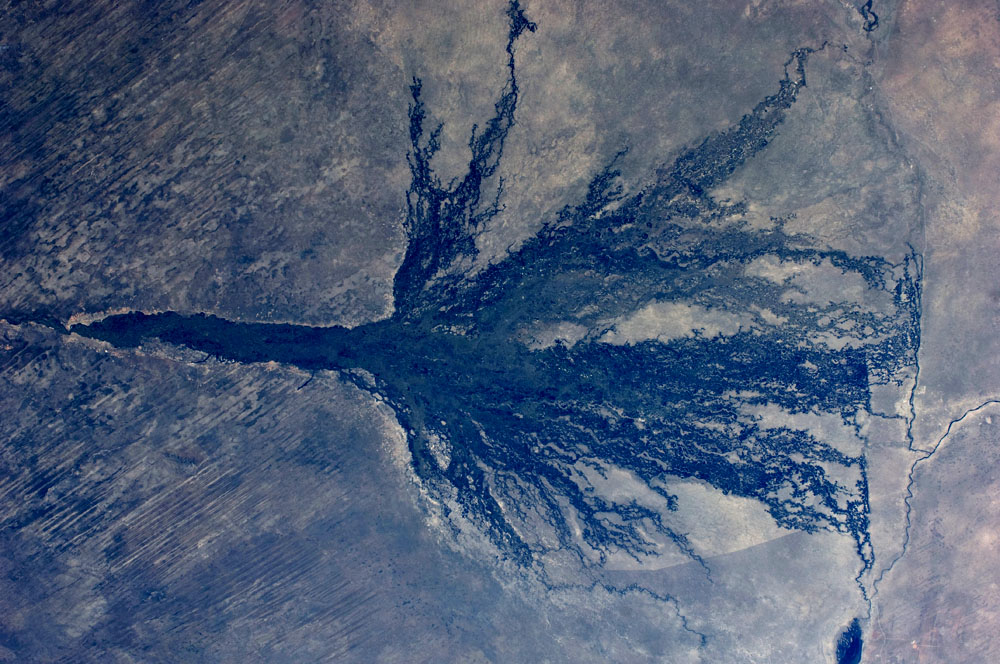 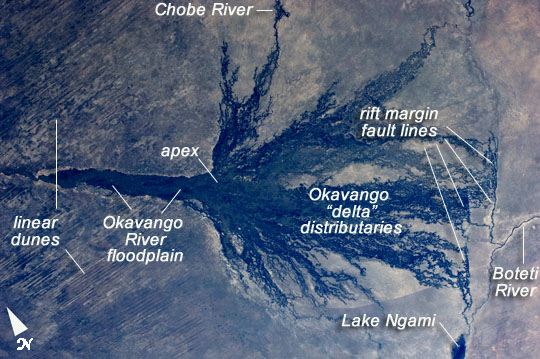 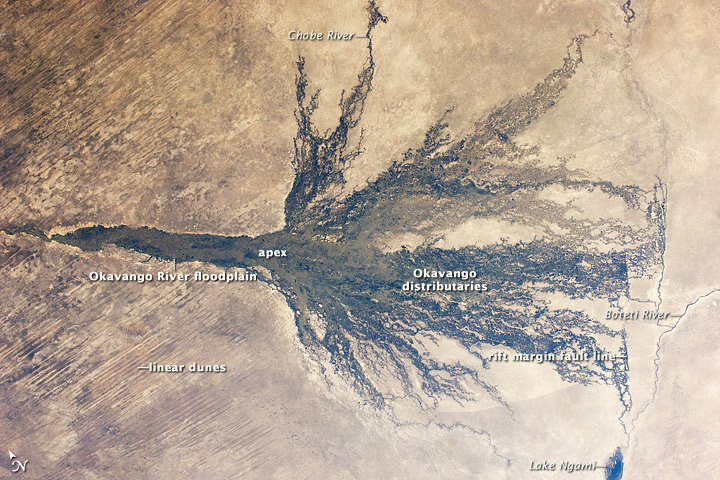 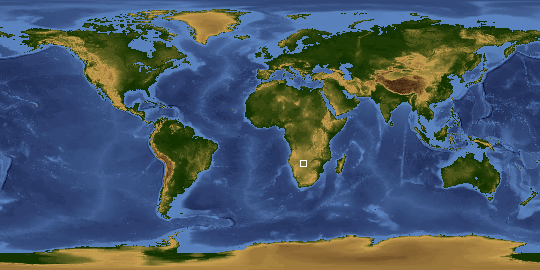 This short focal-length astronaut photograph shows the entire Okavango "delta," a swampland known in Southern Africa as the "Jewel of the Kalahari Desert". This enormous pristine wetland of forest, wildlife, and freshwater almost miraculously appears in a desert where surface water is typically non-existent. The water comes from the Okavango River which rises in the high-rainfall zone of southern Angola, hundreds of km to the northwest. The dark green forested floodplain is ~10 km wide where it enters the view (image left). The Okavango then enters a rift basin which allows the river to spread out, forming the wetland. The width of the rift determines the dimensions of the delta--150 km from apex to the linear downstream margin (image right). The apex fault is more difficult to discern, but two fault lines actually define the downstream margin; the fault traces are indicated by linear stream channels and vegetation patterns oriented at nearly right angles to the southeast-trending distributary channels at image center. The distributary channels carry sediment from the Okavango River that is deposited within the rift basin. Over time, a fan-shaped morphology of the deposits has developed, leading to characterization of the wetland as the Okavango "delta".

The drying trend from higher rainfall in the north (image left) to less rainfall in central Botswana (image right) is shown by the change from the greens of denser savanna vegetation to browns of an open "thornscrub" savanna. More subtle distinctions appear: the distributary arms of the delta include tall, permanent riverine and seasonal forest (dark green), with grasses and other savanna vegetation (light green) on floodplains--which appear well watered in this image. Linear dunes, emplaced by constant winds from the east during drier climates, appear as straight lines at image left. The dunes are 10 m high and their sands hold enough moisture for some trees to grow on them. Counter-intuitively, the low "streets" between the dunes are treeless because they are dominated by dense dry white soils known as calcretes.

This image illustrates a the locally well-known fact that only 2-5% of the water that enters the delta flows out of it--compare the small Boteti River (image right) where water flows out of the delta, with the wide Okavango floodplain (image left). In wetter years some water reaches Lake Ngami (lower right) where it evaporates. Over the decades, various groups have argued that the 95% reduction in water from apex to toe of the delta is a "loss" -- and that water from the Okavango might be better used for local irrigated agriculture, or, carried in via long canals, for maintaining the diamond mines to the south. Various cities have also proposed to use the water, such as Pretoria (South Africa), Gaborone (Botswana), or Windhoek (Namibia). Such plans have been vigorously fought by conservationists, who have argued that, far from being lost, the water is the basis for the vast pristine Okavango wetland. This protected wildlife zone of great richness in a remote setting is now known globally, attracting tourists from around the world. Famous visitors have included Elizabeth Taylor and Richard Burton, whose names are now connected with the Chobe River (image top) on the banks of which they honeymooned.

Another feature visible in the image also suggests modern globalization. The curved line in the southwest part of the delta is the Southern Buffalo Fence, a major installation that separates wild buffalo herds within the wetland from cattle herds, which occupy more populated areas surrounding the delta (image bottom, image right). The fence appears as a divide between lighter-toned and darker grassland--vegetation growth seems to be stronger (greener) on the populated southwest side than within the delta. It continues on the north side of the delta, although it cannot be discerned in this image. The need for the fence arose to control the spread of foot-and-mouth disease from buffalo populations to domestic cattle herds that are the basis of a lucrative and expanding beef industry selling to the European Union. Wildlife proponents argue that the Southern Buffalo and other fences have materially affected the size of wild herds by disrupting migration routes, and regularly cause deaths by entanglement with the fence cables and by preventing animals from reaching water.