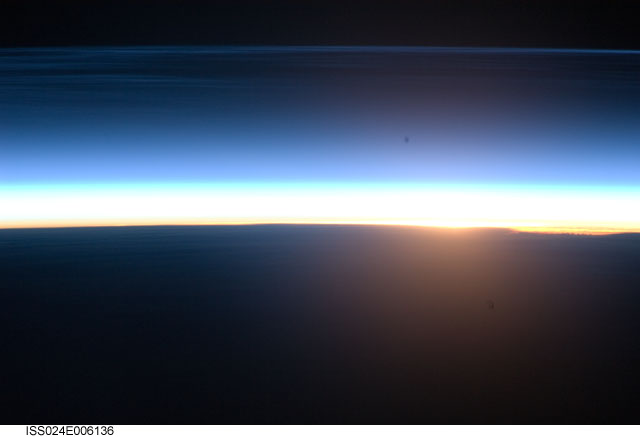 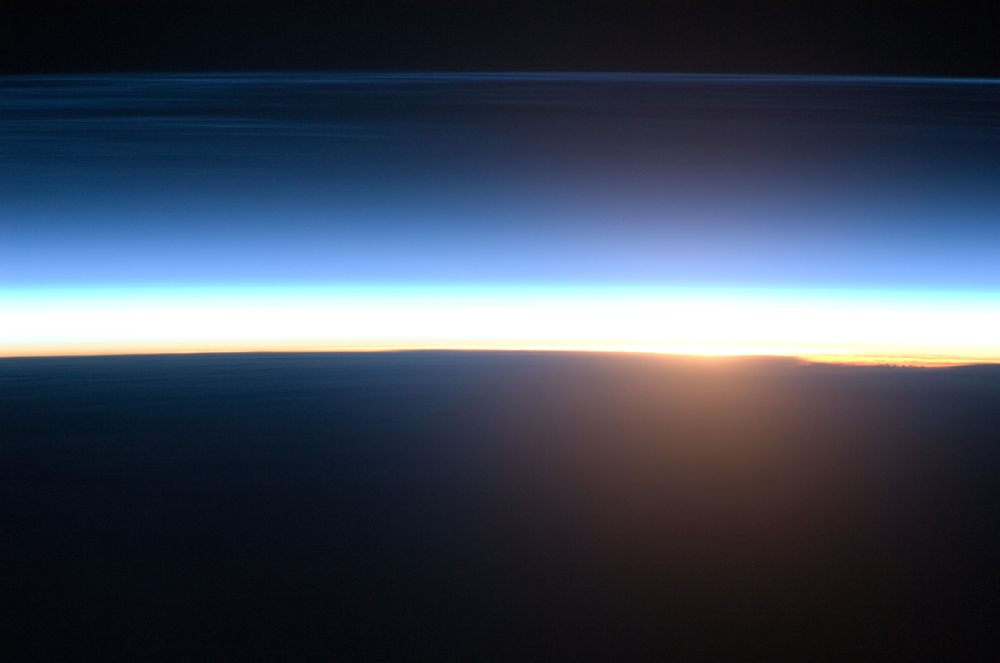 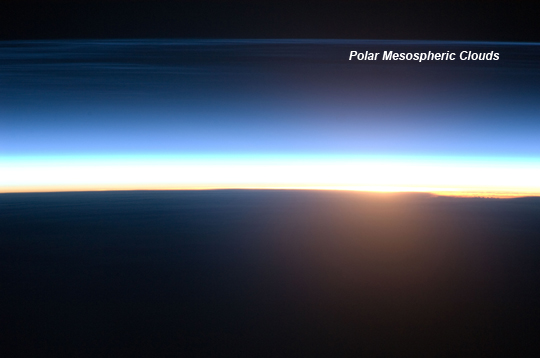 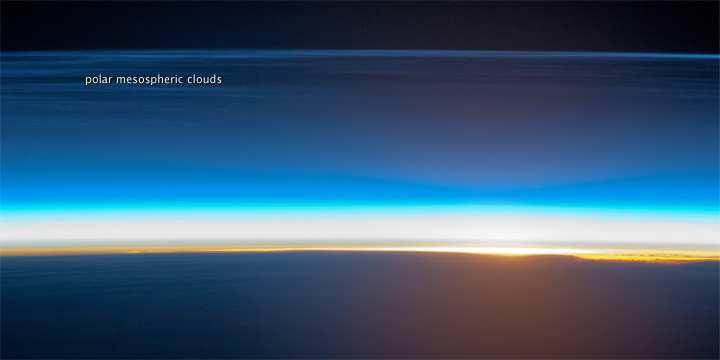 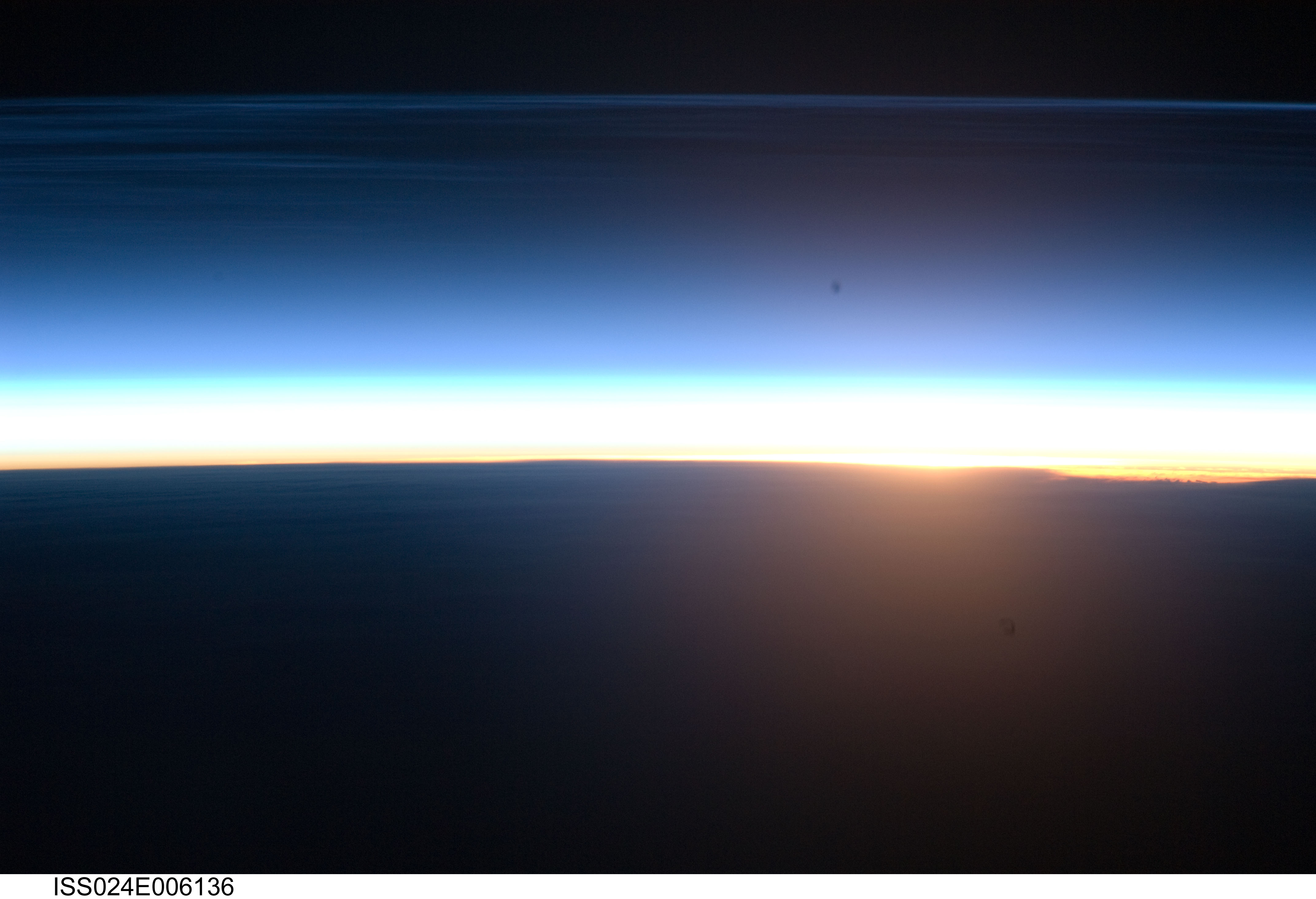 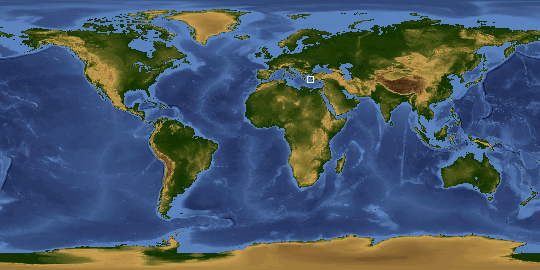 Polar mesospheric clouds can be observed from both the Earth's surface and in orbit by astronauts aboard the International Space Station (ISS). The clouds are also called noctilucent, or "night-shining," clouds because they are usually seen at twilight. When the Sun sets below the horizon and the Earth's surface gets dark, these clouds are still briefly illuminated by sunlight. Occasionally the space station's high-altitude orbital track becomes nearly parallel to the Earth's day/night terminator for a time, allowing polar mesospheric clouds to be visible to the crew at times other than the usual twilight.

This unusual astronaut photograph shows polar mesospheric clouds illuminated by the rising, rather than setting Sun. Low clouds on the horizon appear yellow and orange, while higher clouds and aerosols (particles like dust and pollution) are illuminated a brilliant white. Polar mesospheric clouds appear as light blue ribbons extending across the top of the image. These clouds typically occur at high latitudes of both the Northern and Southern Hemispheres, and high altitudes (76-85 kilometers, near the boundary between the mesosphere and thermosphere atmospheric layers).

The ISS was located over the Greek island of Kos in the Aegean Sea (near the southwestern coastline of Turkey) when the image was taken at approximately midnight local time. The ISS was tracking northeastward, nearly parallel to the terminator, making it possible to observe an apparent "sunrise" almost due north. Earlier this year, a similarly unusual alignment of the ISS orbit track, the terminator position, and the seasonal position of the Earth in its orbit around the Sun allowed astronauts to capture striking imagery of polar mesospheric clouds over the Southern Hemisphere.