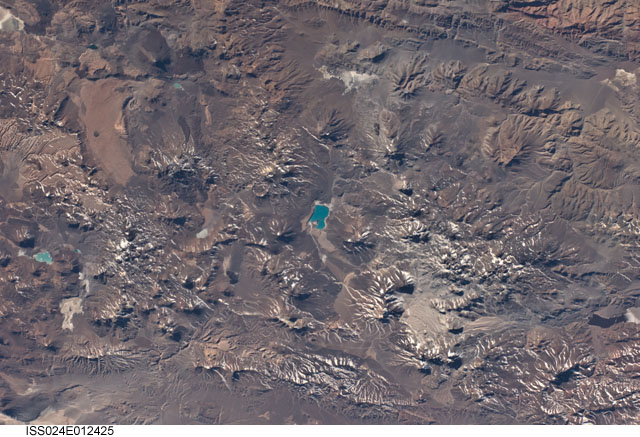 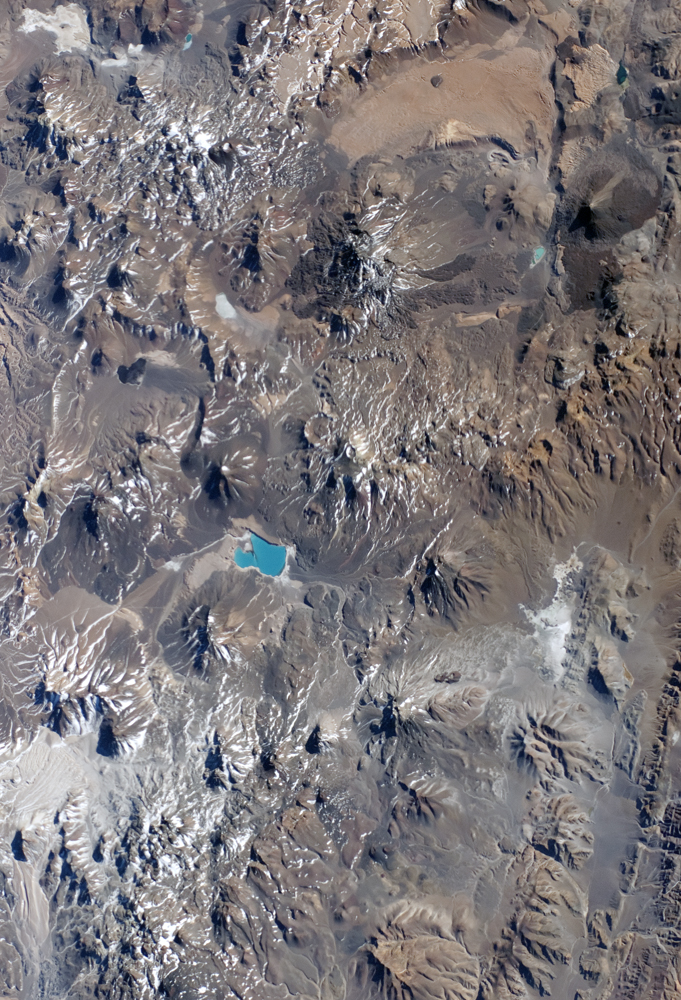 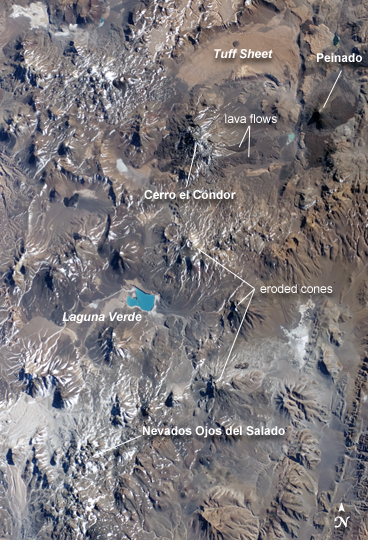 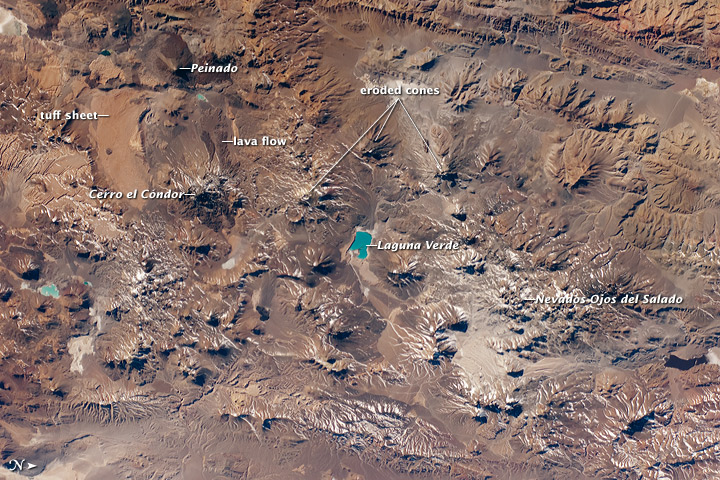 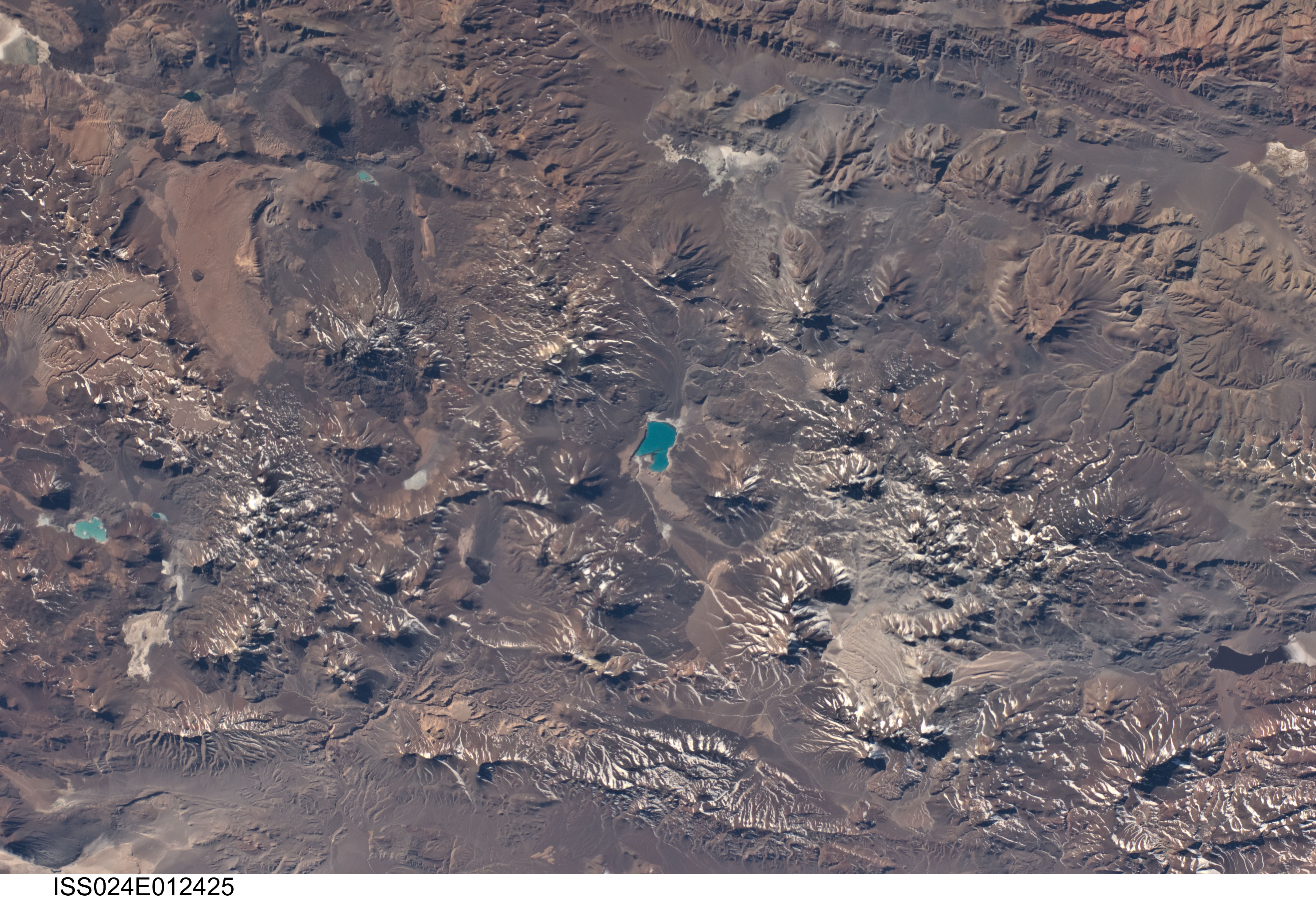 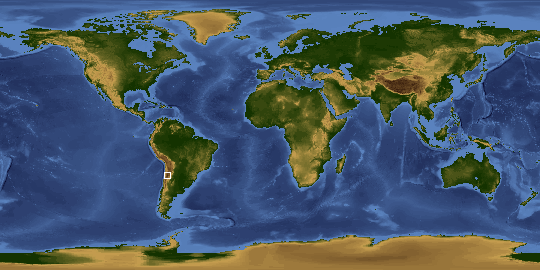 The landscape in the central Andes Mountains, near the border between Chile and Argentina, is dominated by volcanoes and associated landforms. Layers of older sedimentary rocks are visible to the upper middle, and many volcanic cones show grooves where water has eroded the rock to form gullies. Such erosion has occurred since the host volcano was built up, indicating that most volcanoes in this view have been inactive for centuries or millennia.

A few volcanoes exhibit much less erosion, and even show tongues of dark, recent lava flows (upper left). Two of these volcanoes, Cerro el Condor and Peinado, have likely erupted within the past 12,000 years.

Also visible is the world's highest active volcano, Nevado Ojos del Salado, with a summit 6,887 meters (22,600 feet) above sea level. The most recent confirmed eruption has been dated to the year 700 (+/- 300 years), but minor eruptive activity may have occurred as recently as 1993.

Stratovolcanoes such as Cerro el Condor, Peinado, and Nevado Ojos del Salado are formed partly by the buildup of lava flows and partly by the buildup of explosively vented material dropping back down onto the surface. One material associated with these eruptions is welded tuff, formed by molten and fragmented rock that accumulates on the ground and later solidifies. A large tuff sheet is visible at the top left. Formed very rapidly, these sheets have been termed "instant landscapes." The Andean volcanic system has been so active that the origin of many tuffs cannot be pinpointed because the source vents have been overprinted by subsequent volcanic events.

The landscape also shows that the erosive work of rivers and glaciers in the region is slower than the upward building processes of the volcanoes. The bright blue lake -- nearly 7 km (4.3 miles) long -- near the center of the image is Laguna Verde. This and other less obvious lakes indicate that water from snowmelt or direct precipitation is unable to reach the sea, being impounded in the depressions between the volcanic edifices.