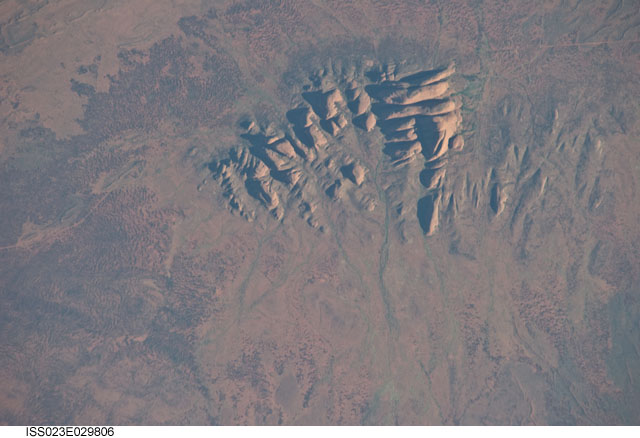 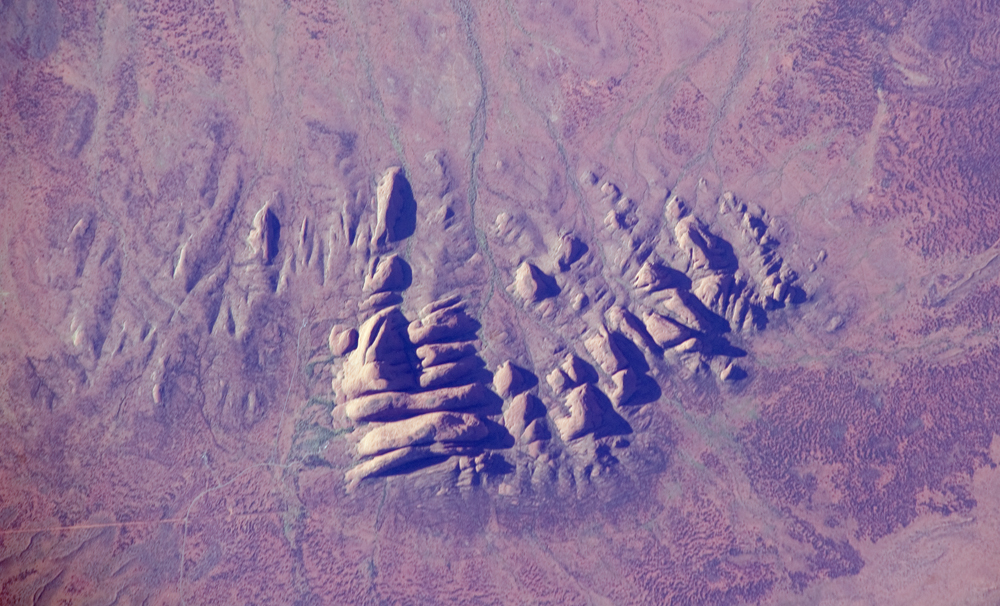 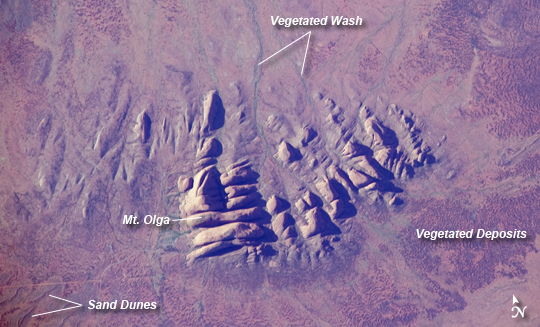 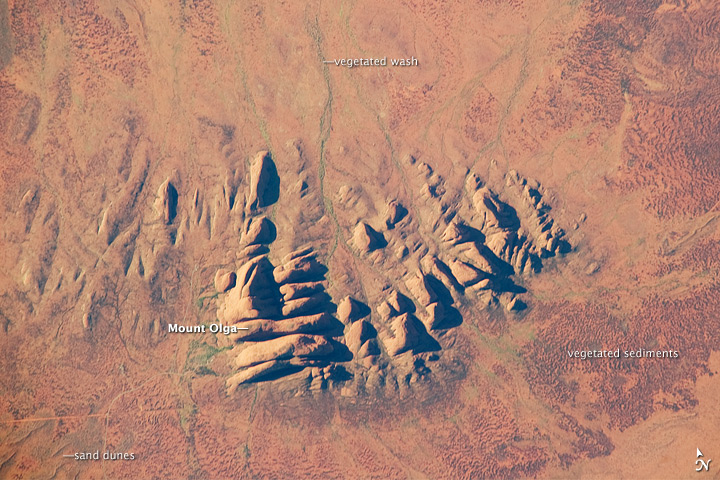 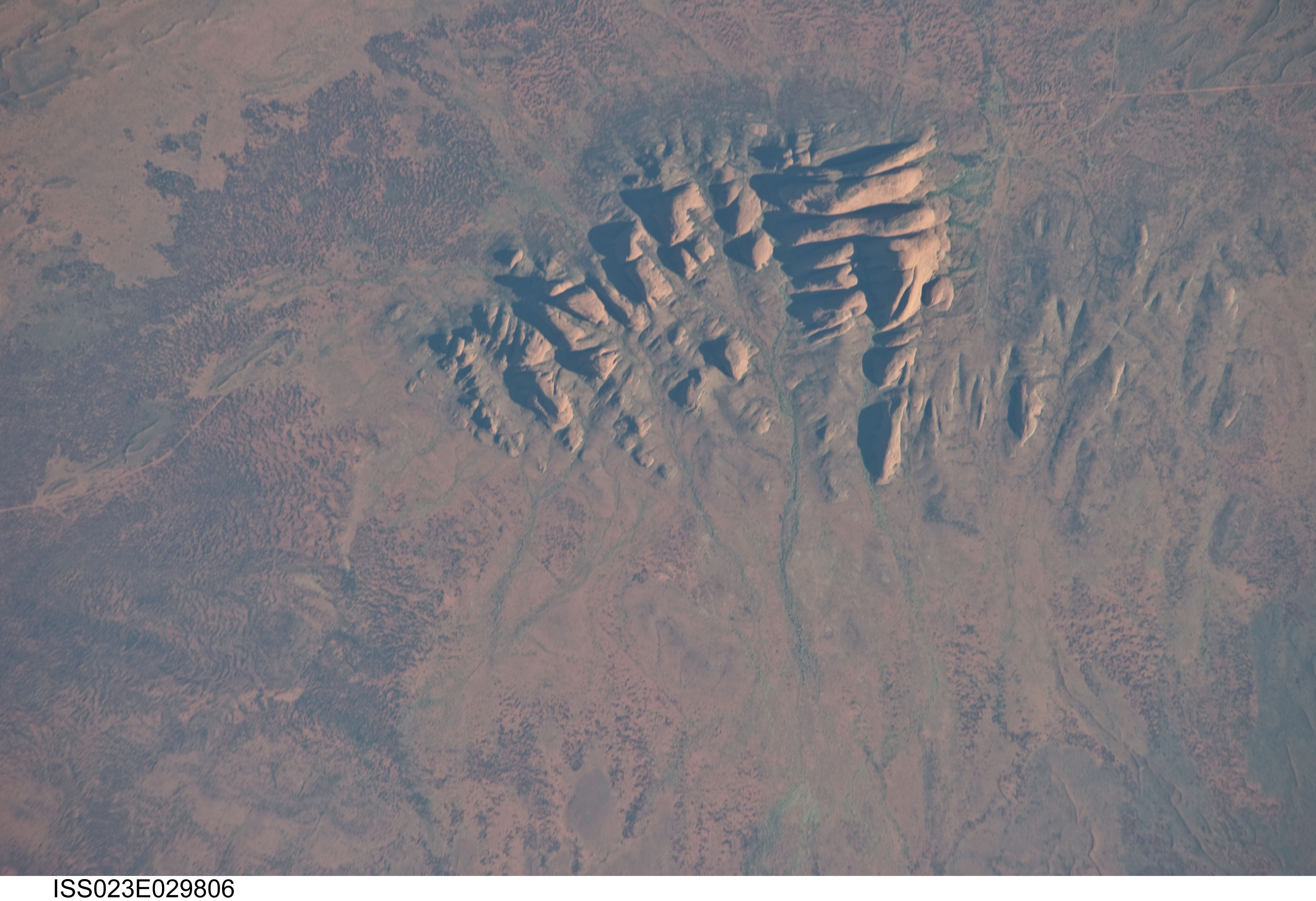 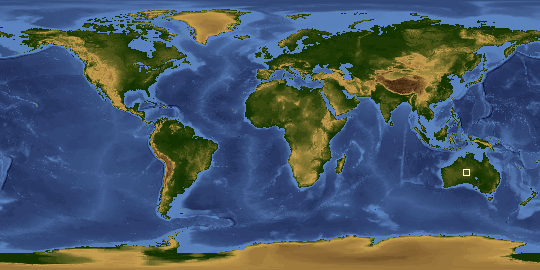 Located in the Northern Territory of Australia, Uluru-Kata Tjuta National Park hosts some of the world's most spectacular examples of inselbergs, or isolated mountains. The most famous of these inselbergs is Uluru (also known as Ayers Rock). An equally massive inselberg located approximately 30 kilometers (20 miles) to the northwest is known as Kata Tjuta. Like Uluru, this is a sacred site to the native Anangu or Aboriginal people. An English-born explorer named the highest peak Mount Olga, with the entire grouping of rocks informally known as "the Olgas." Mount Olga has a peak elevation of 1,069 meters (3,507 feet) above sea level, making it 206 meters (676 feet) higher than Uluru.

In this astronaut photograph, afternoon sunlight highlights the rounded summits of Kata Tjuta against the surrounding sandy plains. Sand dunes are visible at image lower left, while in other areas (image bottom and image right) sediments washed from the rocks have been anchored by a variety of grasses and bushes adapted to the arid climate. Green vegetation in the ephemeral stream channels that drain Kata Tjuta (image top center) provides colorful contrast with the red rocks and surrounding soils. Large gaps in the rocks (highlighted by shadows) are thought to be fractures that have been enlarged due to erosion.

Kata Tjuta is comprised of gently dipping Mount Currie Conglomerate, a sedimentary rock that includes rounded fragments of other rock types (here, primarily granite with less abundant basalt and rhyolite in a coarse sandy matrix. Geologists interpret the Mount Currie Conglomerate as a remnant of a large fan of material rapidly eroded from mountains uplifted approximately 550 million years ago. Subsequent burial under younger sediments consolidated the eroded materials to form the conglomerate exposed at the surface today.