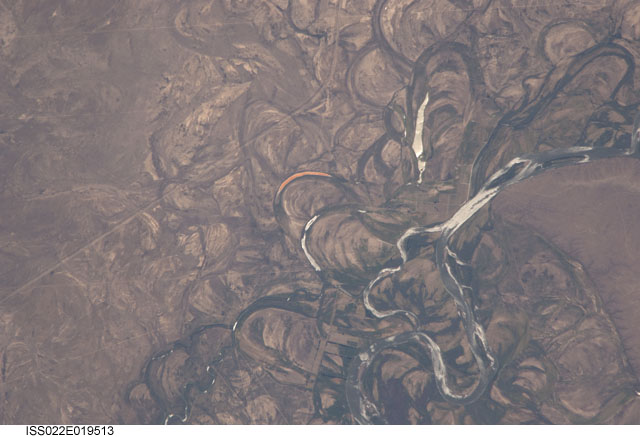 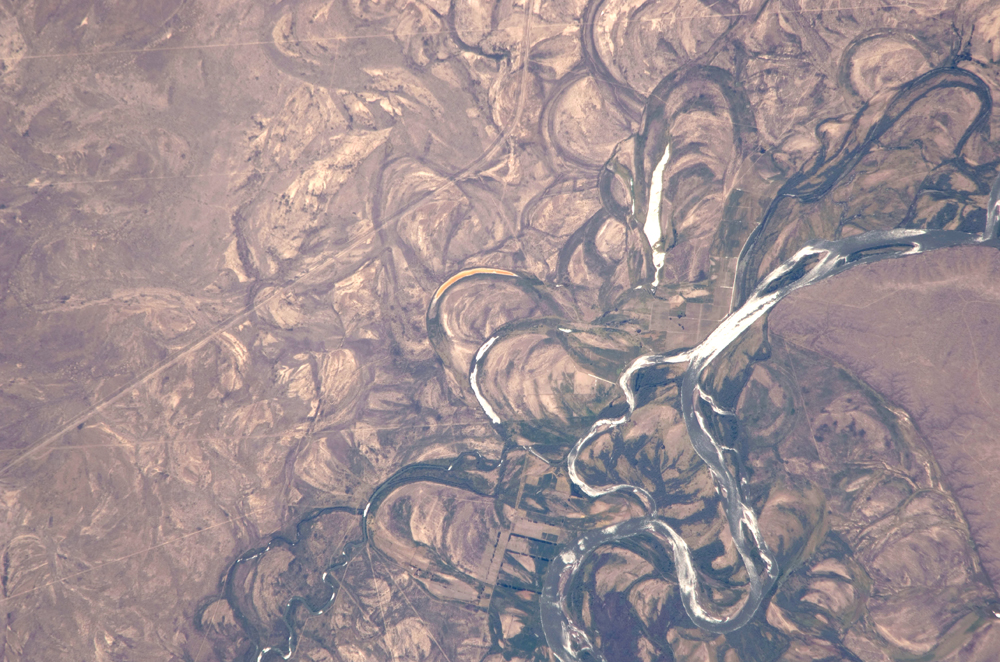 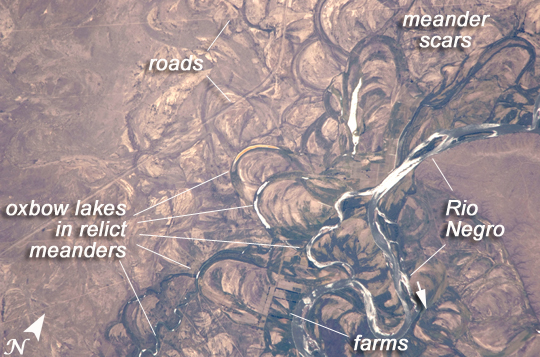 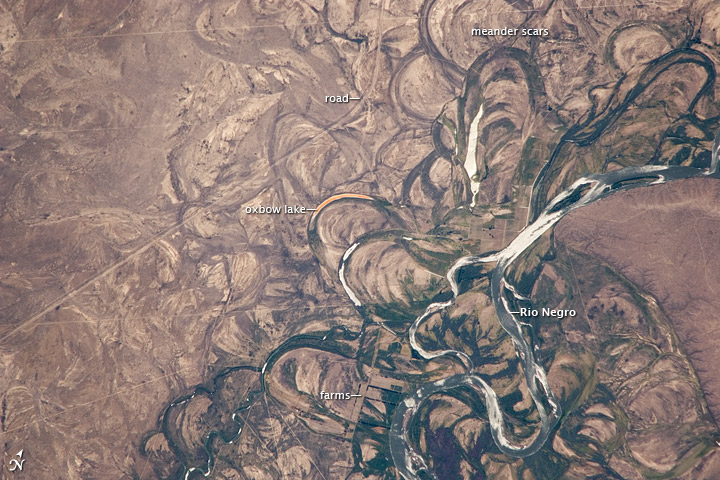 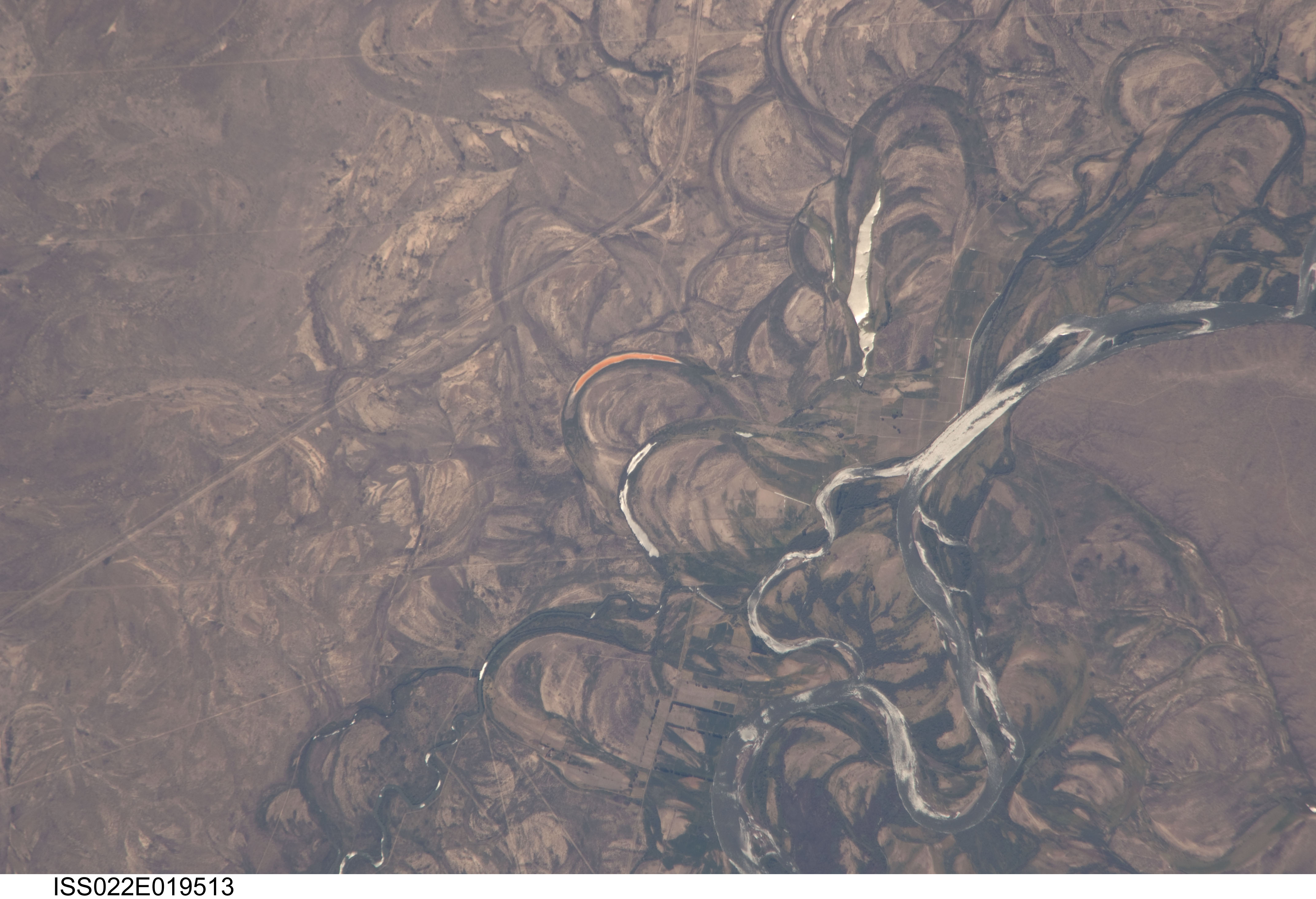 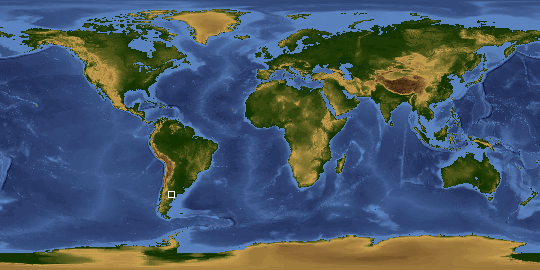 The Rio Negro is recognizable by astronaut crews from orbit as one of the most meandering rivers in South America. In this astronaut photograph, the entire floodplain (mostly ~10 kilometers wide) is covered with curved relicts of channels known as meander scars. Meander scars show the past positions of river bends. The Rio Negro is a dramatic example of how mobile a river can be; these meanders were produced as the river snaked across the plain in the very recent geological past, probably during the last few hundred years.

The main channel of the river, flowing south at this point--sixty kilometers south of the city of Choele Choel (not shown)--appears in partial sun glint at image right. Sun glint occurs when light is reflected off a water surface directly back towards the viewer, like a mirror, imparting a silvery sheen to those areas. When meander scars contain water they are known as oxbow lakes, some of which are also highlighted by sun glint in the image.

The orange tint to the water in one of the oxbow lakes (image center) could result from orange salt-loving algae. Their appearance here would be unusual since floodplain lakes are usually too fresh for algae blooms. But an explanation may lie in the location of the Rio Negro on the margin of Argentina's arid Patagonian region, where annual rainfall is less than 300 millimeters (12 inches). Evaporation in this cloudless region could be high enough for some lakes to become salty.

The Rio Negro flows generally southeast from the Andes Mountains to the Atlantic Ocean. Its floodplain supports the biggest pear- and apple-growing region of Argentina. Rectangular farm boundaries can be seen at bottom center in the image. The river also hosts the world's longest kayak regatta, which lasts six days. During the 1800s, the river was also the demarcation line between farmlands of European settlers and territory controlled by indigenous people.