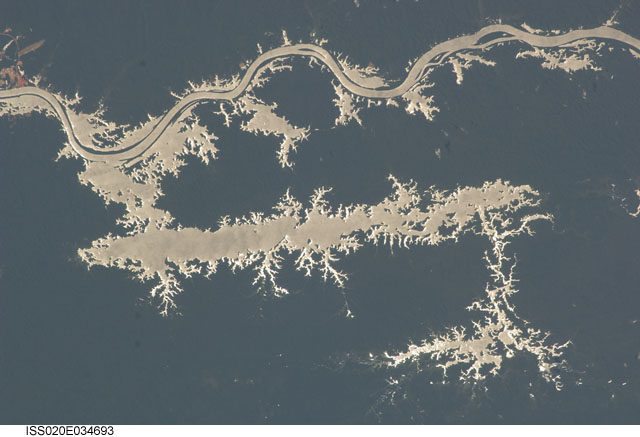 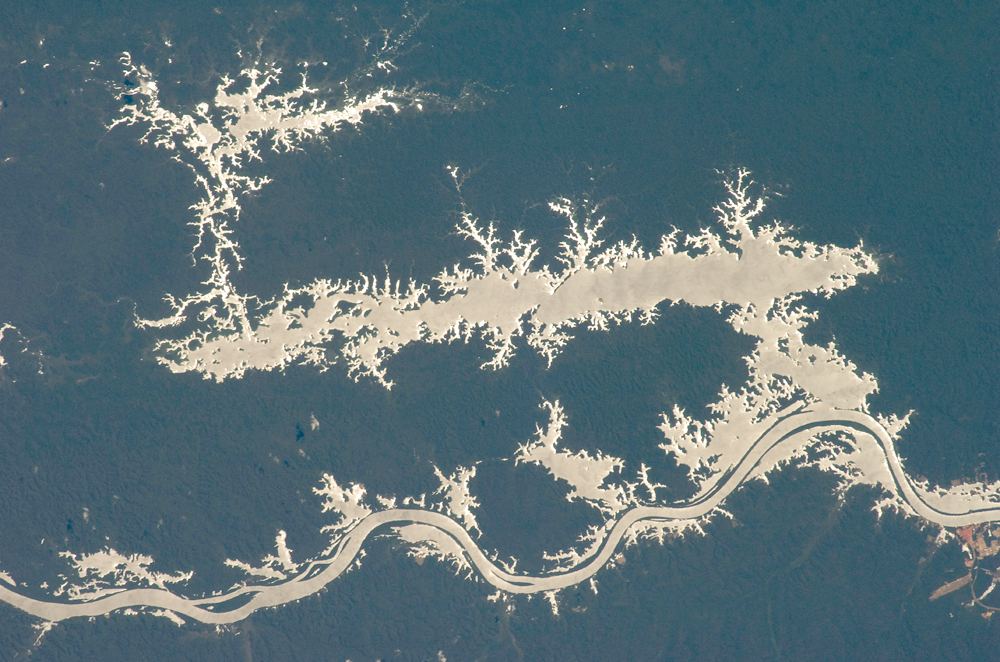 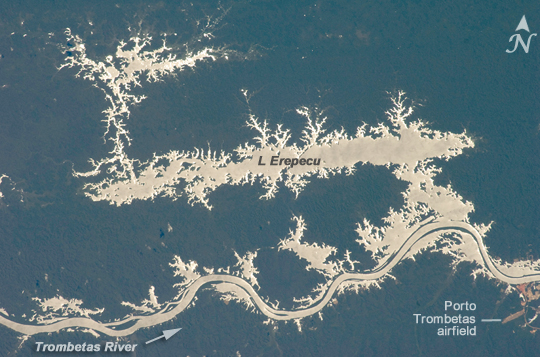 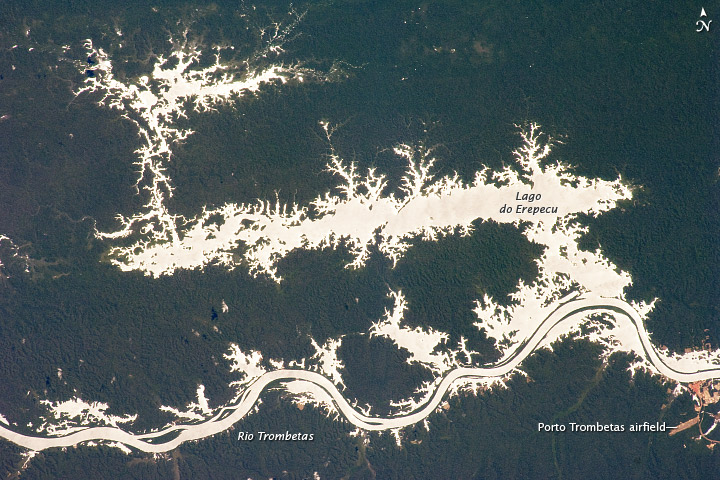 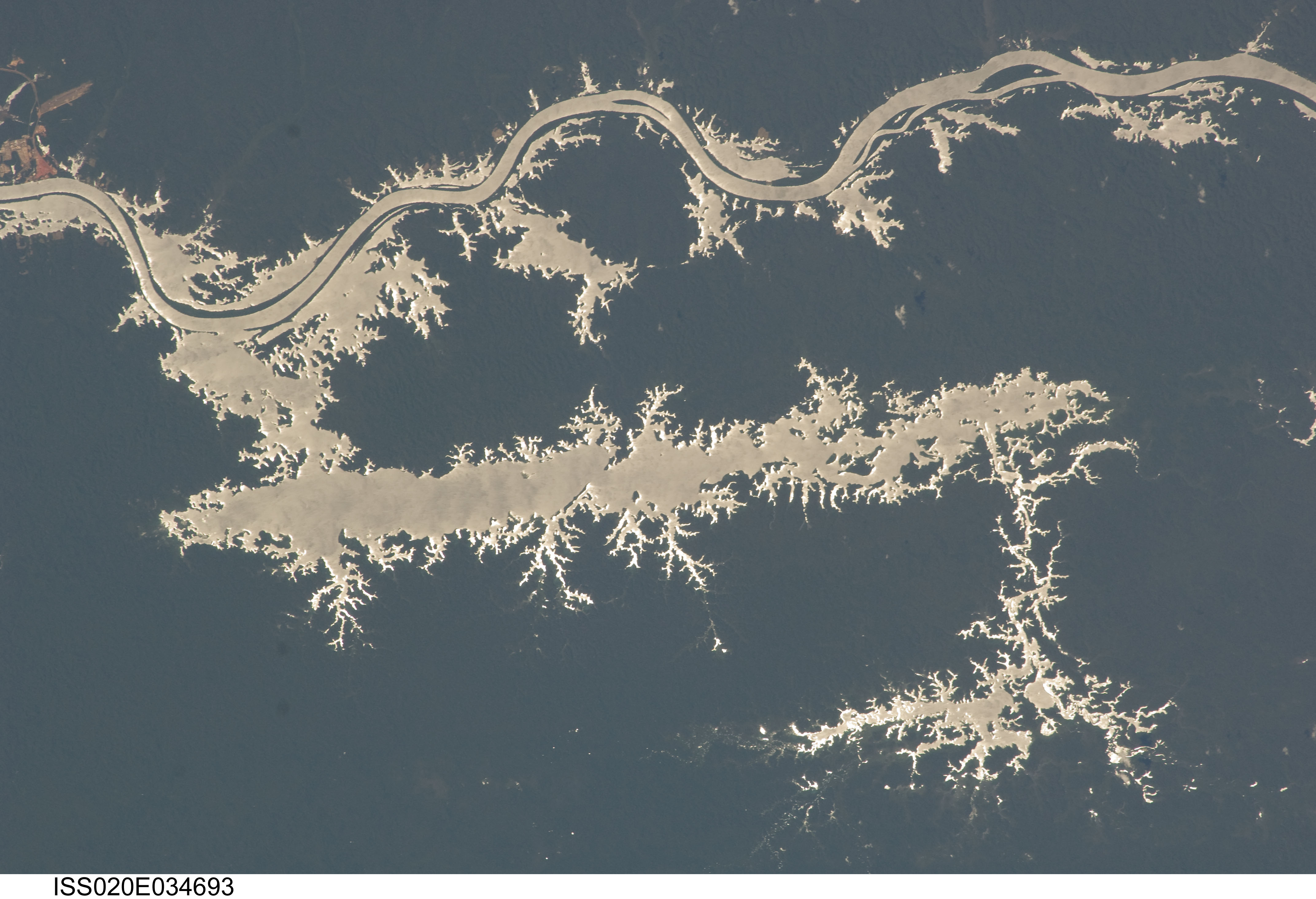 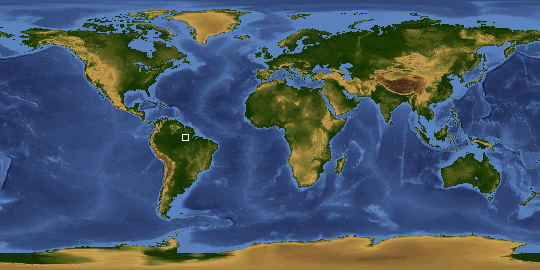 The 38-kilometer-long (about 24 miles) Lago do Erepecu (Lake Erepecu) in Brazil runs parallel to the lower Rio Trombetas (Trombetas River), which snakes along the lower half of this astronaut photograph. Waterbodies in the Amazon rainforest are often so dark they can be difficult to distinguish. In this image, however, the lake and river stand out from the uniform green of the forest in great detail as a result of sunglint on the water surface. Sunglint is the mirror-like reflection of sunlight off of a surface directly back towards the viewer, in this case an astronaut onboard the International Space Station.

Forest soil is red, as shown by airfield clearings near Porto Trombetas (image far lower right), a river port on the south side of the Trombetas River. The Trombetas flows into the Amazon River from the north about 800 kilometers (497 miles) from the Amazon mouth. Despite being so far from the sea, seagoing ore ships export most of Brazil's bauxite from Porto Trombetas. Bauxite is the raw material used to produce aluminum. (The Trombetas bauxite mine is beyond the lower edge of the image).

Central Amazonia has many lakes like Erepecu--relatively straight, large waterbodies located just off the main axis of the large rivers. These lakes began as rivers that carved deeply into the landscape during periods of low sea level accompanying ice ages in the past 1.7 million years. When sea level was low, the gradient from a river's headwaters to its end at the ocean was steeper, and rivers flowed faster and carved deeper beds. During intervening warm periods, rising sea level reduced the gradient at the river's end so much that it faced an impossible task--flowing uphill to the ocean.

The only way a river could have continued to flow to the sea is if it was carrying enough sediment to fill the deep river valleys carved during low sea level, creating a new "ground level" for the river to flow across. Many larger rivers like the Trombetas and the Amazon itself carried enough loose sediment to fill their deeply carved valleys, and then to trace sinuous courses (lower part of image) across the new beds. But smaller rivers that carried less sediment could not fill in their deep valleys; instead, the valleys acted like troughs. The river water poured in, but couldn't flow out because of rising sea level, so lakes like Erepecu formed.