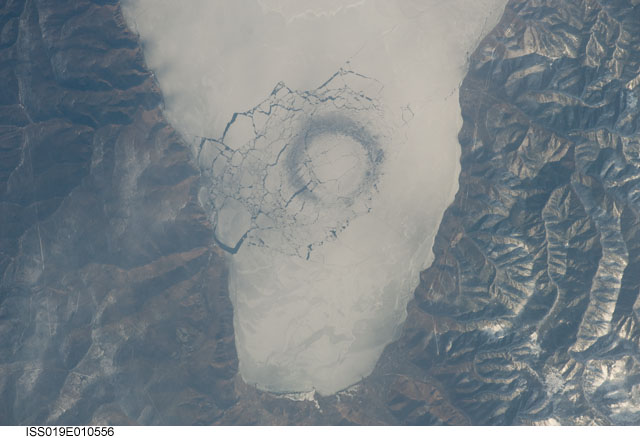 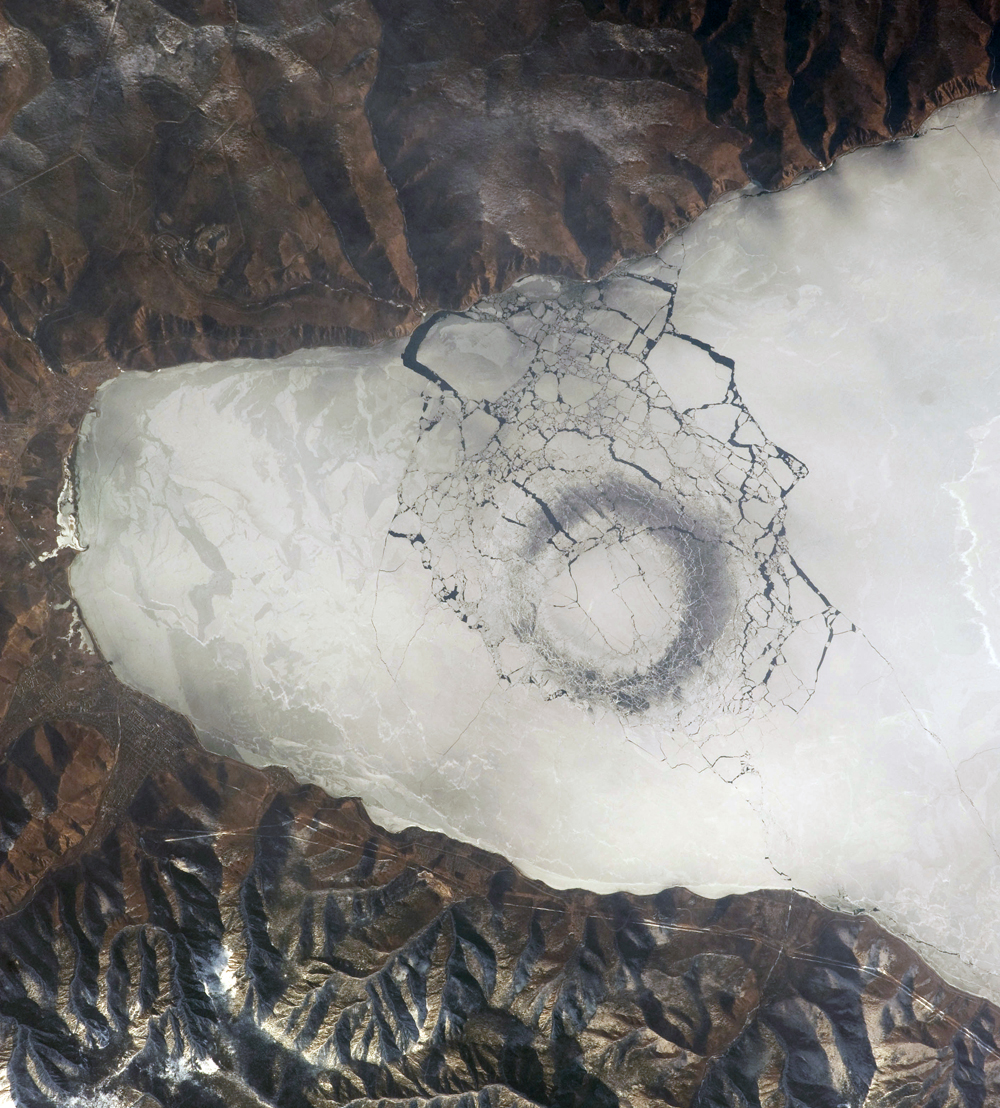 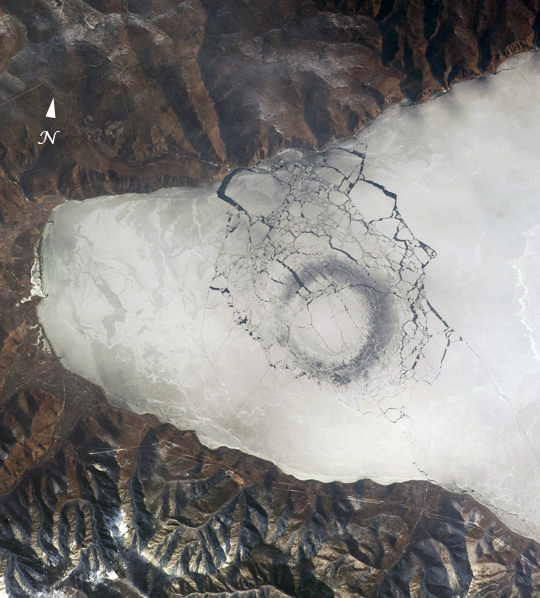 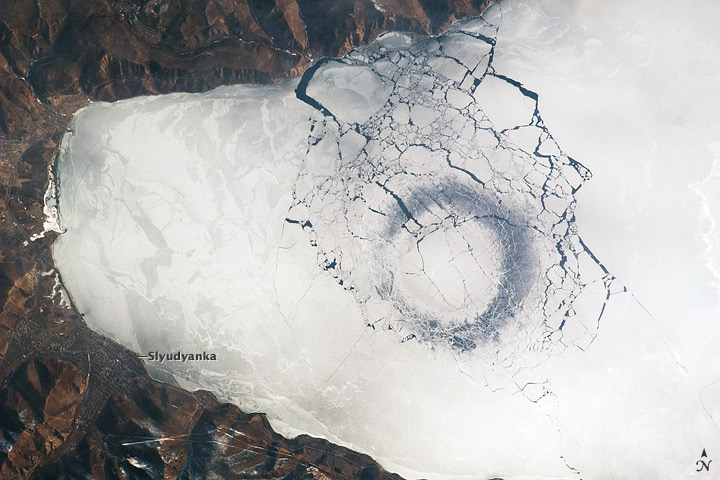 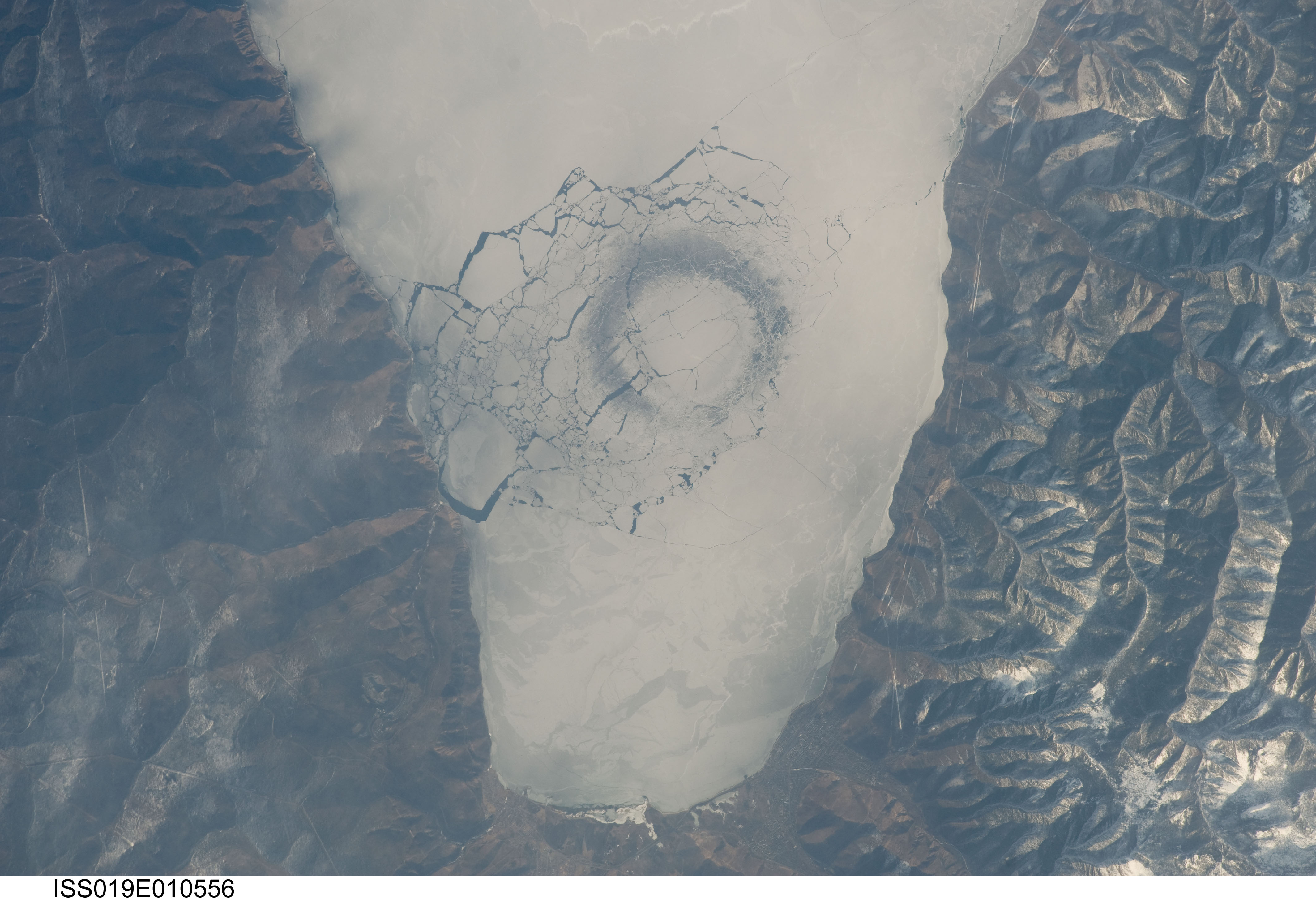 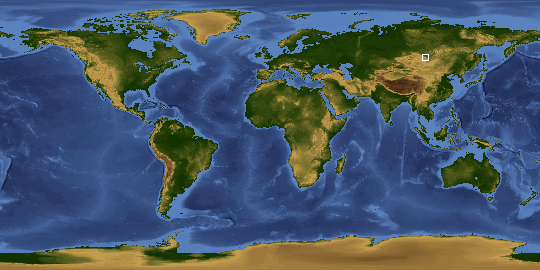 Late in April 2009, astronauts aboard the International Space Station observed a strange circular area of thinned ice in the southern end of Lake Baikal in southern Siberia. Siberia is remote and cold; ice cover can persist into June. The upper image, a detailed astronaut photograph, shows a circle of thin ice (dark in color, with a diameter of about 4.4 kilometers); this is the focal point for ice break up in the very southern end of the lake. A sequence of MODIS images indicates that the feature was first visible on April 5, 2009.

Baikal contained another, very similar circle near the center of the lake above a submarine ridge that bisects the lake (ice circles are indicated by arrows in the lower MODIS image from April 20). Both circles are visible through April 20, 2009. Clouds cover the center of the lake until April 24, at which point the circular patch of thin ice was becoming a hole of open water. Similar circular ice patterns--although not nearly as distinct--have been documented in the same central area of the lake in April 1994 (during the STS-59 Shuttle mission) and in 1985 (during the STS-51B Shuttle mission).

While the origin of the circles is unknown, the peculiar pattern suggests convection (upwelling) in the lake's water column. Ice cover changes rapidly at this time of year. Within a day, the ice can melt almost completely and freeze again overnight. Throughout April, the circles are persistent: they appear when ice cover forms, and then disappear as ice melts. The pattern and appearance suggest that the ice is quite thin. The features were last observed in MODIS images on April 27, 2009.

What can cause convection, bringing warmer waters to the surface? Hydrothermal activity and high heat flow have been observed in other parts of the lake, but the location of this circle near the southern tip, over relatively deep water, is puzzling.

Lake Baikal is unique in many regards. It is the largest (by volume) and deepest (1,637 meters at the deepest point) fresh water lake on Earth and, as a World Heritage Site, it is considered one of Russia's environmental jewels. It is also one of the world's oldest lakes (25-30 million years old); sediment deposited on the bottom is up to 7 kilometers deep. The lake's long, thin, and deep shape results from its location in the Baikal Rift Valley.

As a United Nations World Heritage Site, Lake Baikal is considered one of Russia's environmental jewels. It is home to an amazing array of plants and animals, many of them unique to the ecosystem. The lake's biodiversity includes fresh water seals and several species of fish that are not found elsewhere on Earth.