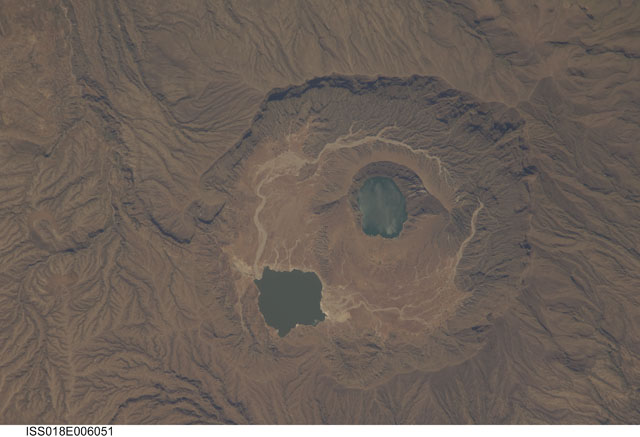 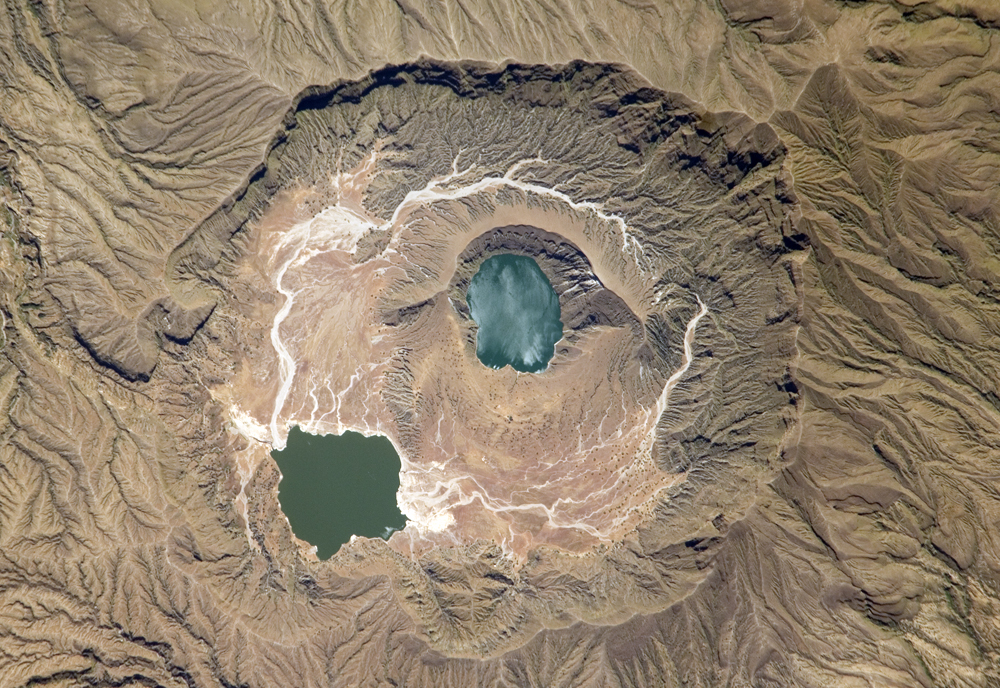 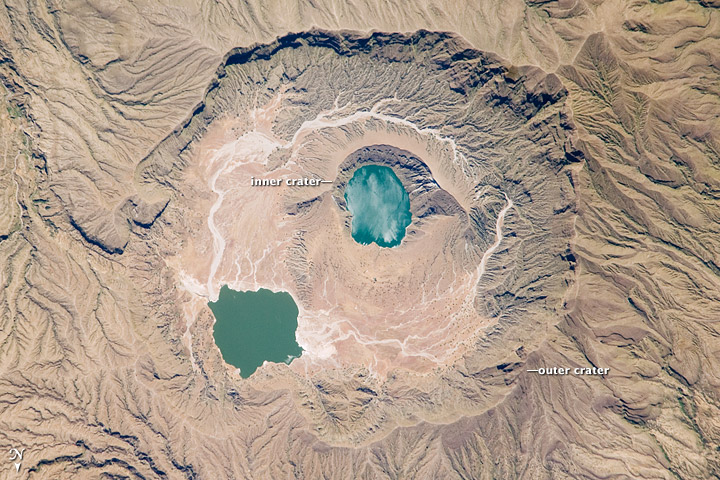 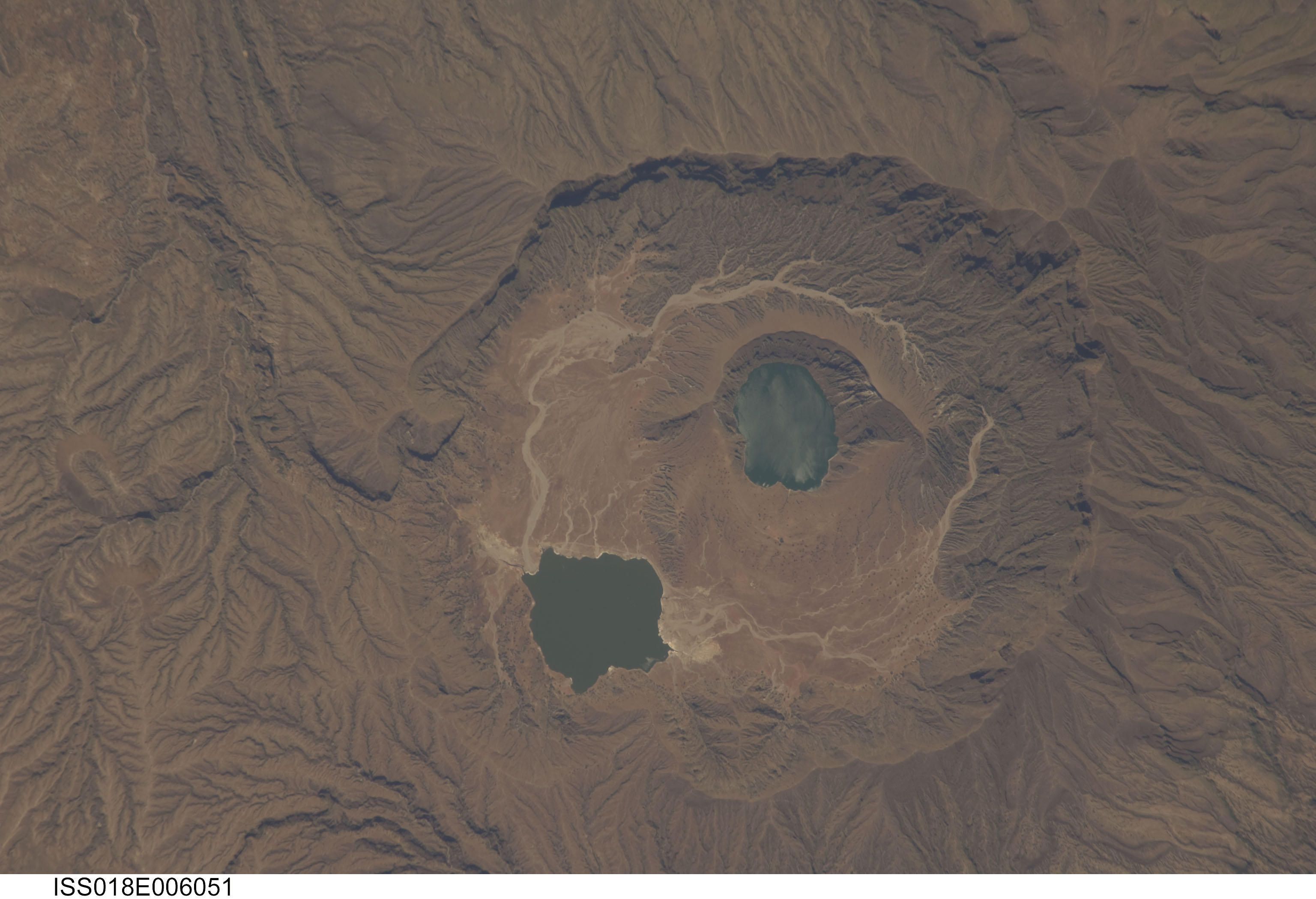 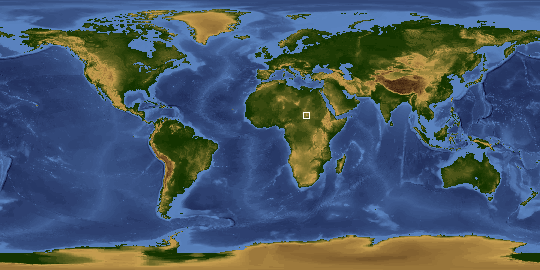 Deriba Caldera is a geologically young volcanic structure located at the top of the Marra Mountains of western Sudan. The Marra Mountains are part of a large geologic feature known as the Darfur Dome. The dome appears to be the result of a mantle plume, which is a fixed "hotspot" in the Earth's mantle (the layer of Earth below the crust). The mantle plume heated the crust from below, leading to uplift of the crust and providing a magma source for the extensive volcanism observed in the region. The 5-kilometer-wide Deriba Caldera was formed by explosive eruption of the Jebel Marra Volcano approximately 3,500 years ago. The volcano is considered dormant, rather than extinct, as hot springs and fumaroles (gas and steam vents) are still present.

The caldera has the classic shape: it formed as overlying rock and soil collapsed into the magma chamber after it was emptied by powerful eruptions. Shadows in this astronaut photograph throw the steep southern wall of the outer crater into sharp relief. Following the formation of the main outer crater, a second inner crater (image center) formed, most likely due to later uplift and eruption of fresh magma moving towards the surface. This inner crater is filled with water.

Because the walls of the inner crater are higher than the adjacent caldera floor, precipitation flowing inwards from the outer crater walls do not enter the inner crater lake. White stream bed sediments (image center) show the water pathway around the inner crater to a second lake located along the northeast wall of the outer crater. While Jebel Marra is high enough (3,042 meters) to have a temperate climate and high precipitation, these lakes may be fed by hot springs as well as rainwater. The inner crater lake has a mottled appearance caused by sunglint--light reflected off a roughened water surface back towards the astronaut onboard the International Space Station.