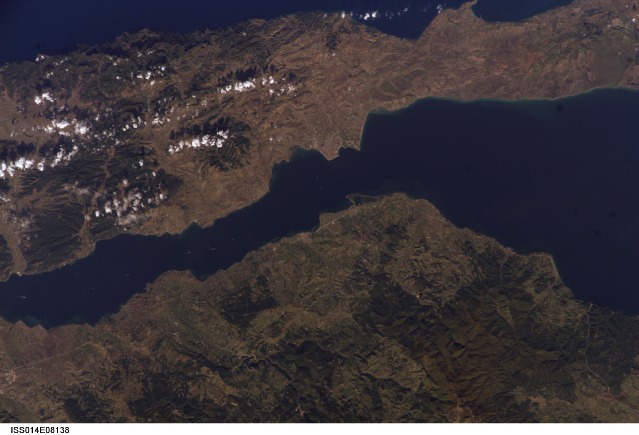 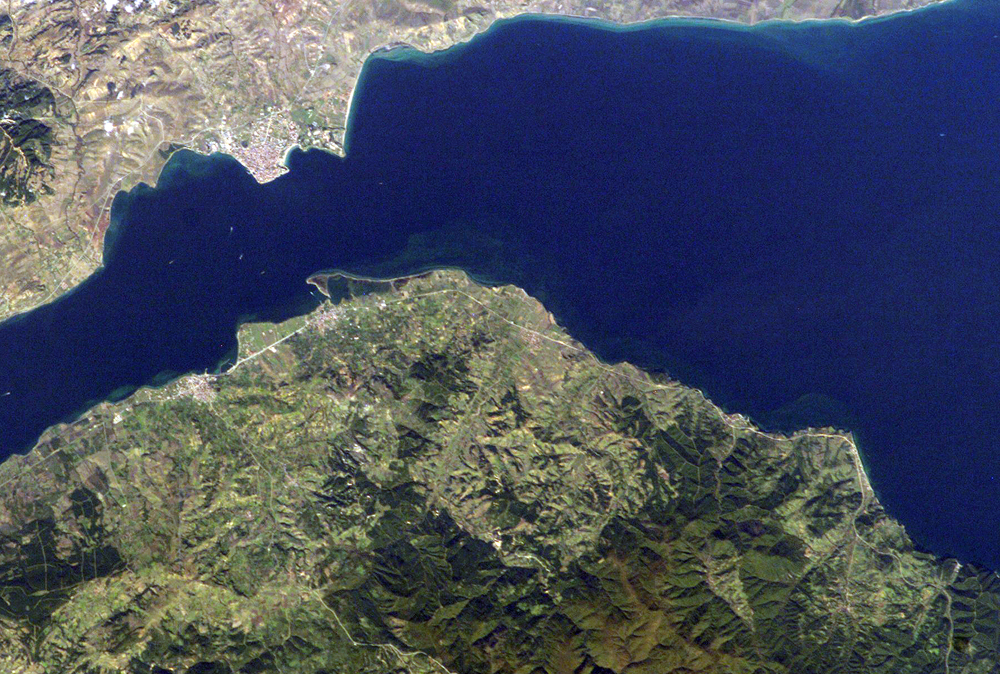 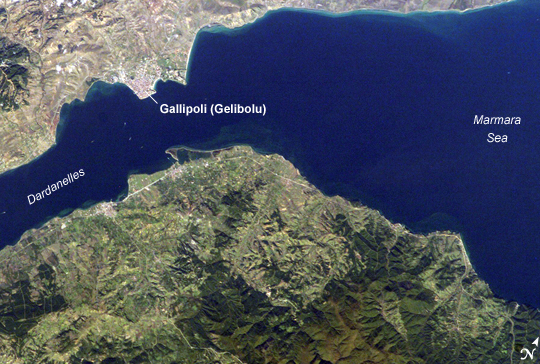 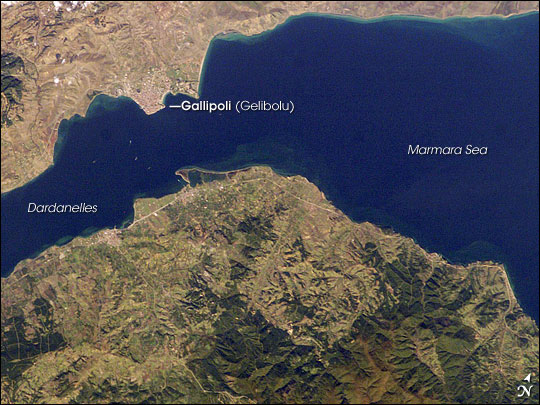 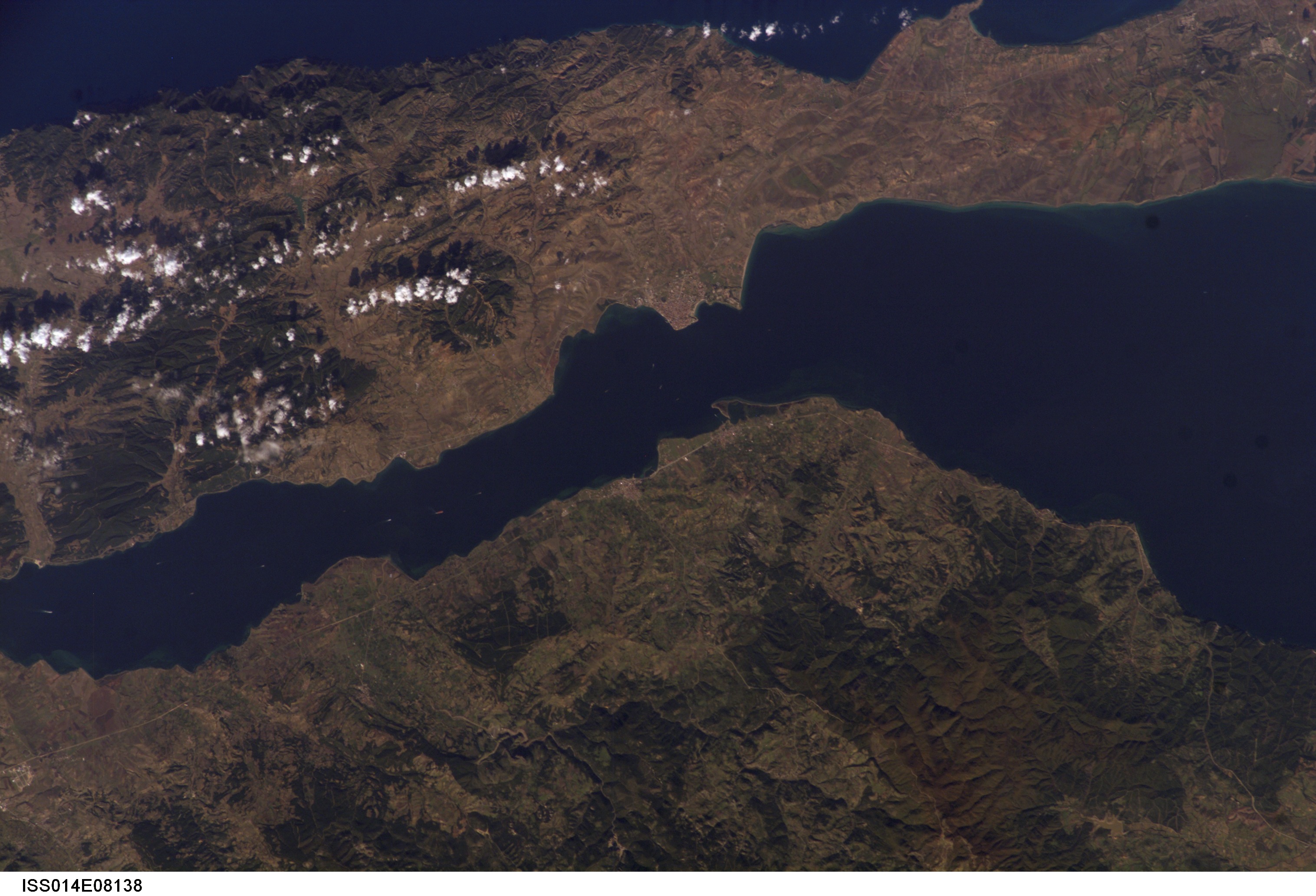 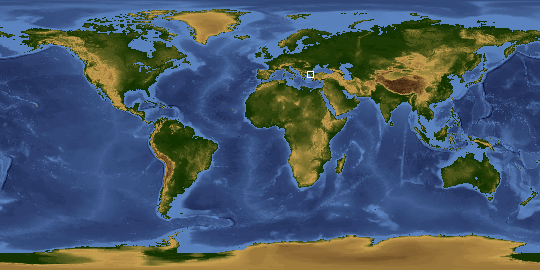 Other options available:
Download Packaged File
Download a Google Earth KML for this Image
View photo footprint information
Image Caption: Gallipoli and Dardanelles Strait, Turkey:
The city of Gallipoli (Gelibolu in Turkish) sits at a crossroads between the Marmara and Aegean Seas, connected by the Dardanelles Strait. The strait is a 61-kilometer-long drowned valley formed along a fault (fracture in Earth's crust). The fracture formed as the Arabian, Indian, and African tectonic plates collided with the Eurasian plate during the Tertiary period, approximately 2-65 million years ago. This faulting created the rugged terrain of western Turkey visible in the lower half of this astronaut photograph, as well as the great mountain ranges of the Alps and Himalayas. Plate collision continues today as Turkey moves westward in relation to Eurasia. The movement leads to frequent strike-slip earthquakes (quakes in which the relative ground motion along the fault is forward or backward, rather than up or down.)

The urbanized area of modern Gallipoli is visible as a light gray to pink region at the entrance to the Dardanelles Strait. Water in the Strait flows in both northeast and southwest directions due to opposite surface and undercurrents. The Strait has a long history of strategic importance as it provides a conduit between the Mediterranean and Black Seas, as well as access to Ankara, Turkey's capital, to the northeast (not shown). Several ships are visible in the Strait to the southwest of Gallipoli (image center left). The Battle of Gallipoli--part of an Allied plan to capture Istanbul, then the capital of the Ottoman Empire--was fought near the city during World War I.