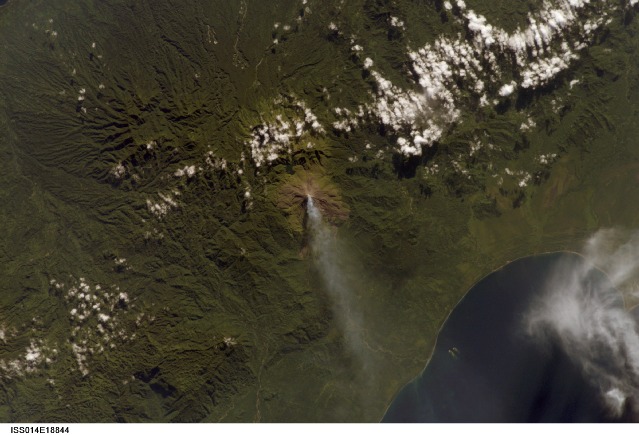 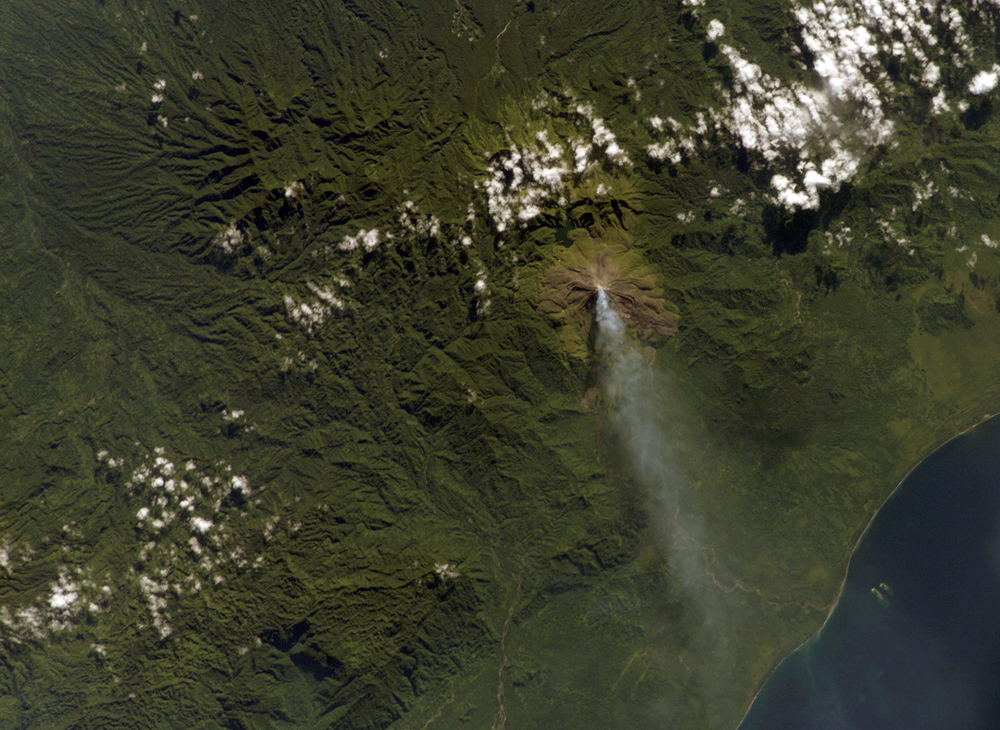 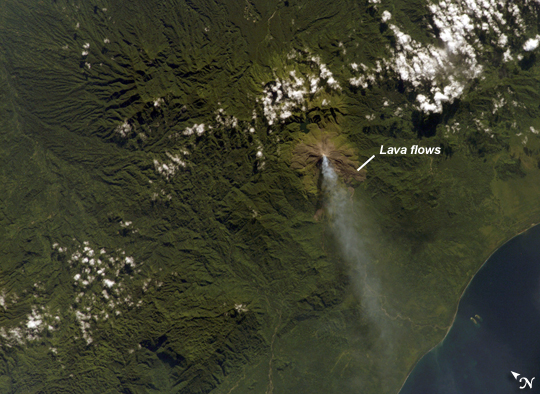 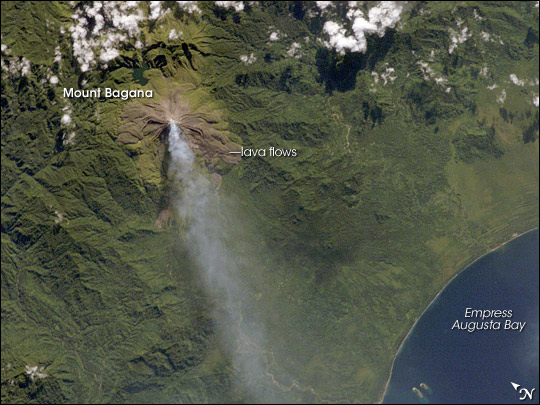 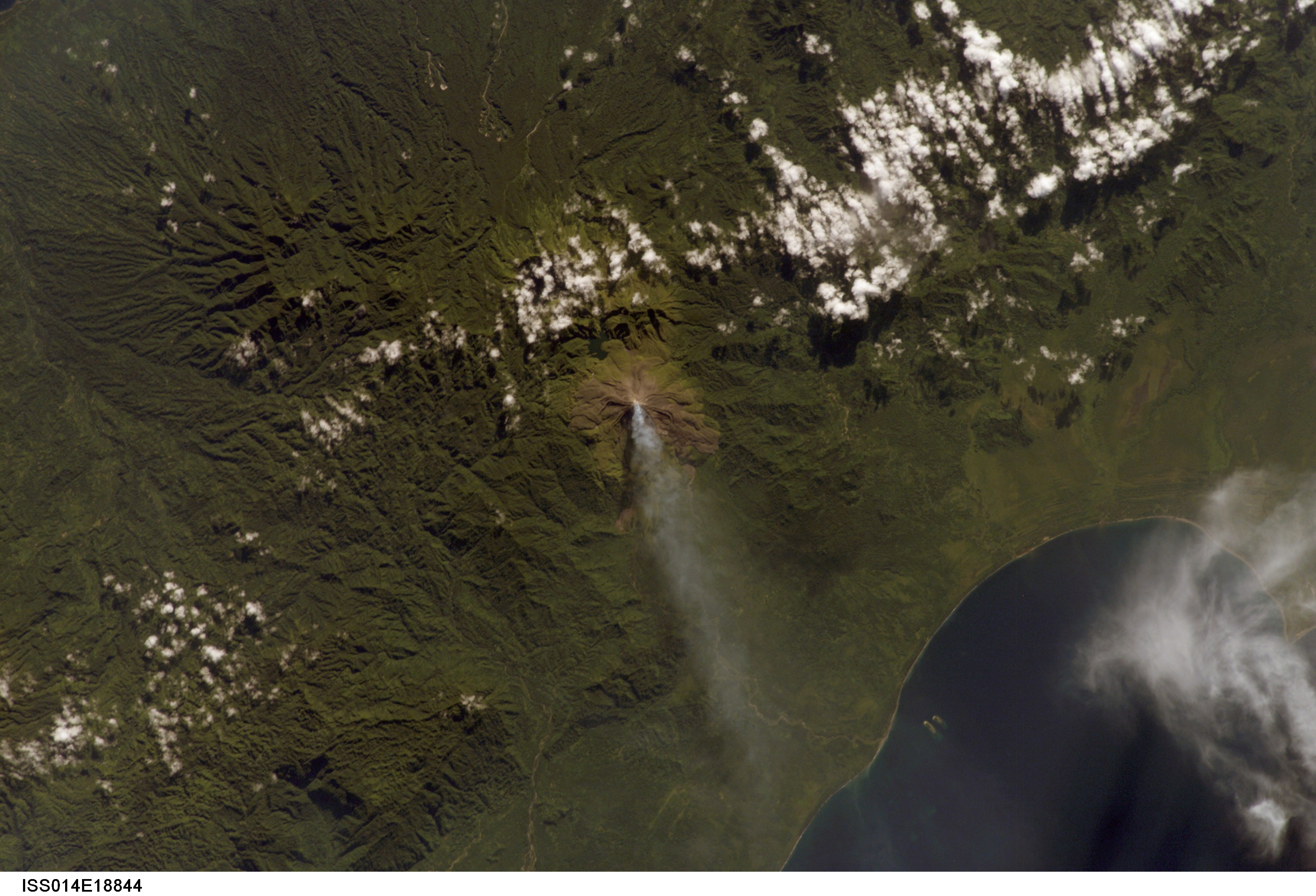 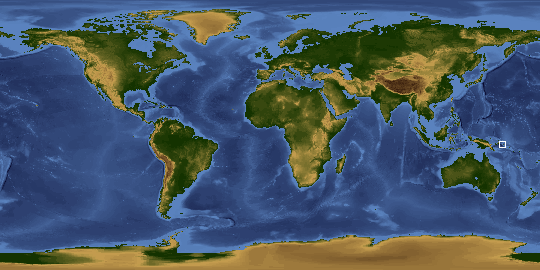 Other options available:
Download Packaged File
Download a Google Earth KML for this Image
View photo footprint information
Download a GeoTIFF for this photo
Image Caption: Plume at Mount Bagana, Bouganville Island:
Bouganville Island is geographically part of the Solomon Islands chain to the east of Papua New Guinea. (Politically, the island is part of Papua New Guinea.) Bouganville is typical of many Pacific Rim islands in that volcanism has played a large part in both its geological and recorded history. The island hosts three large volcanoes along its northwest-southeast trending axis: Mount Balbi, Mount Bagana, and the Mount Takuan volcanic complex. Mount Bagana, located near image center in this astronaut photograph, is the only historically active volcano on the island.

Within Bouganville's lush landscape, light green vegetation and brown lava flows mark the 1,750-meter-high lava cone of Mount Bagana. The lighter color of vegetation could result from volcanic activity, higher altitude, or both. The eruptive style of the volcano is typically non-explosive, producing thick lobes of lava that run down the flanks and maintain a dome in the summit crater. Occasional pyroclastic flows of rock fragments and volcanic ash have also occurred. The most recent phase of activity, which began on March 7, was characterized by vapor plumes with occasional ash-producing emissions. This astronaut photograph, acquired 20 days after the last reported activity at Bagana, shows a diffuse white vapor plume extending west-southwest from the summit.

The Solomon Island region experiences other effects due to the geologic setting. On April 1, 2007, a large but shallow earthquake shook the region and induced a tsunami that hit the western part of the Solomon Island chain.