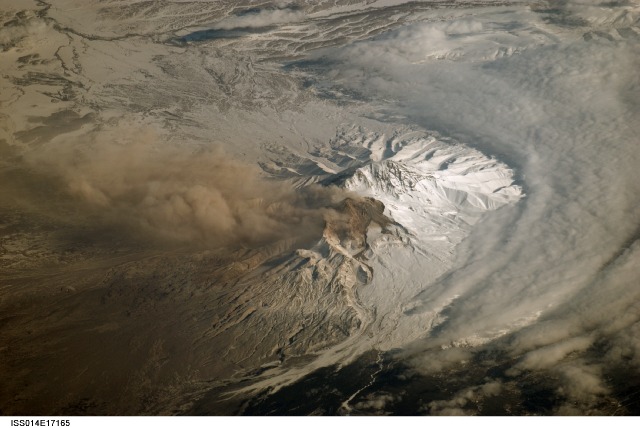 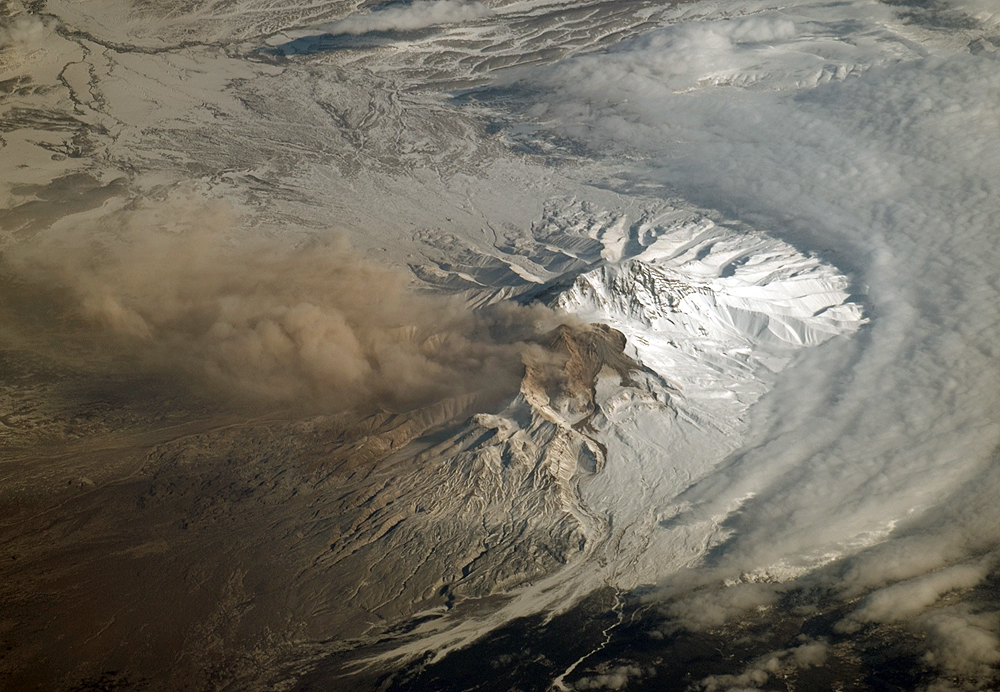 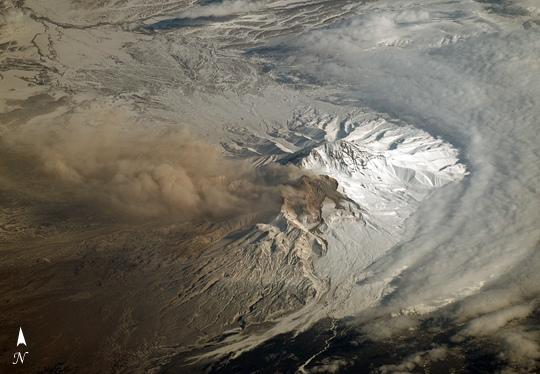 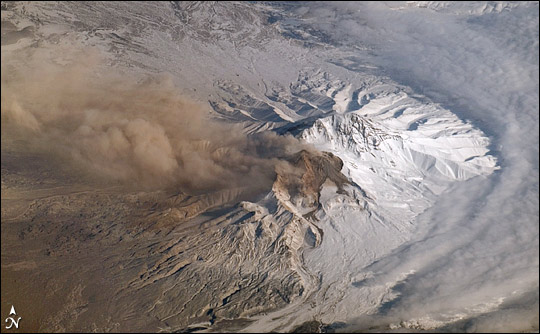 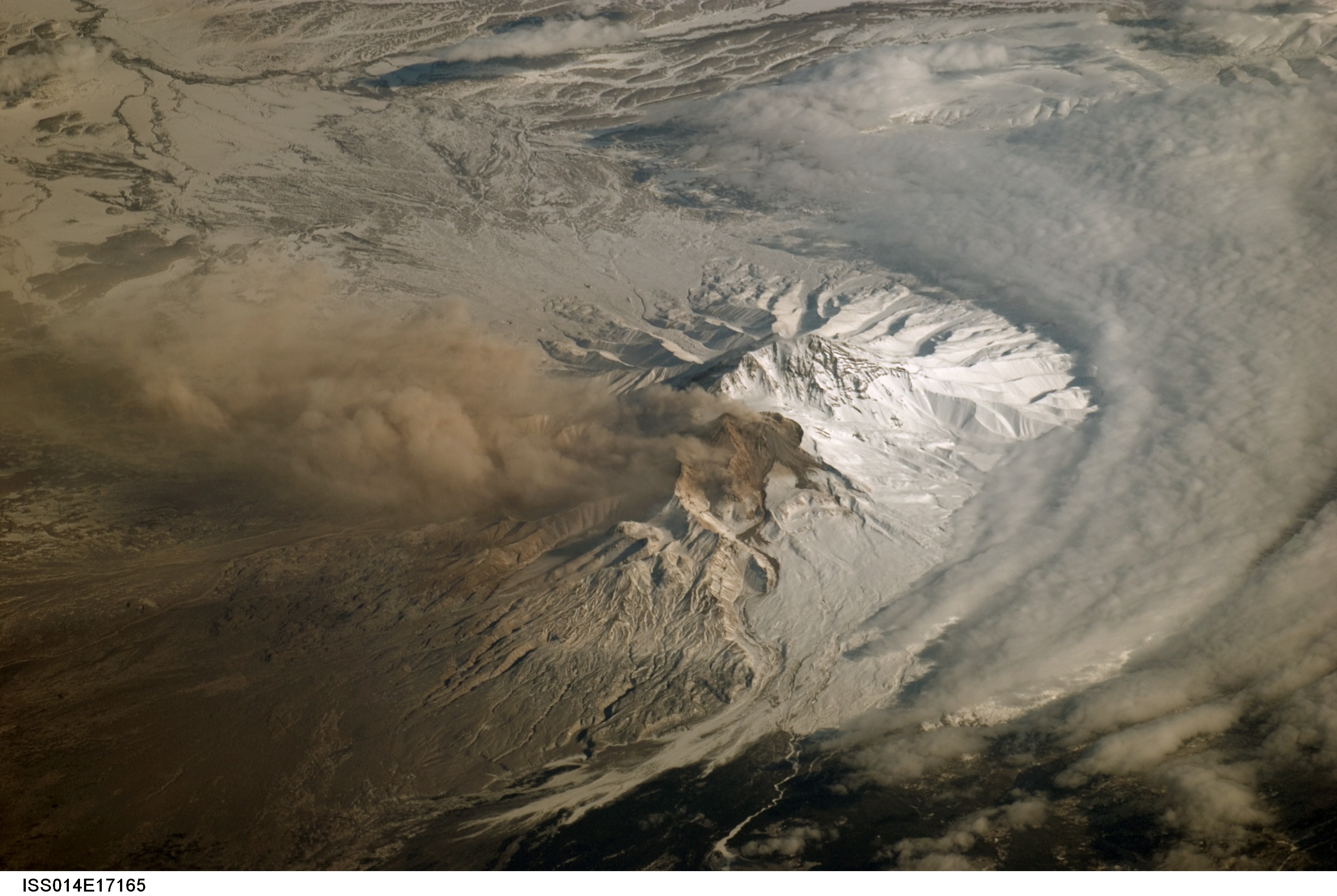 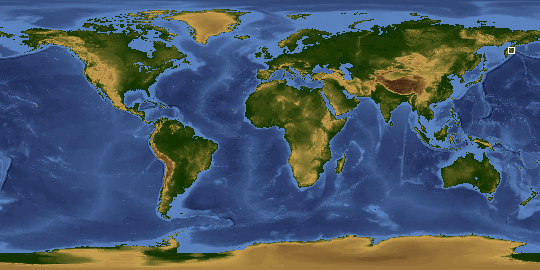 Other options available:
Download Packaged File
Download a Google Earth KML for this Image
View photo footprint information
Download a GeoTIFF for this photo
Image Caption: Plume at Shiveluch Volcano, Kamchatka Peninsula, Russia:
Shiveluch, one of Kamchatka's most active volcanoes, began its latest activity with gas and steam emissions in mid- to late March 2007. This image was taken by astronauts aboard the International Space Station (ISS) around mid-morning on or around March 21, 2007. It shows a steam plume, probably containing minor amounts of ash, blowing westward from the summit of the volcano. The astronauts were crossing over the southern tip of Russia's Kamchatka Peninsula, with a clear view of the volcano about 5 degrees north of the ground track of the ISS. Subsequent eruptions on March 29 and 30 have been recorded by the Kamchatka Volcano Observatory and NASA satellites.

The volcano's southern flank, clearly visible in this northeast-looking view, is dominated by a horseshoe-shaped caldera formed during an eruption in the late Pleistocene Epoch (the last ice age, the geologic time period that ended roughly 10,000 years ago). The caldera was subsequently blanketed by additional ash deposits, and in this image is highlighted by the surrounding snow. Shiveluch's peak is snow-free, its brown color due to exposed rock and ash deposits. The relatively smooth landscape of the south contrasts with the large, steep valleys on the northern slope of the volcano. Low clouds wrap around the eastern part of the mountain, obscuring the lower elevations.