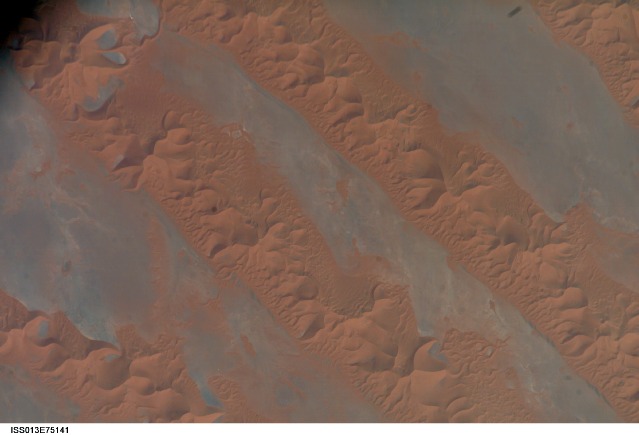 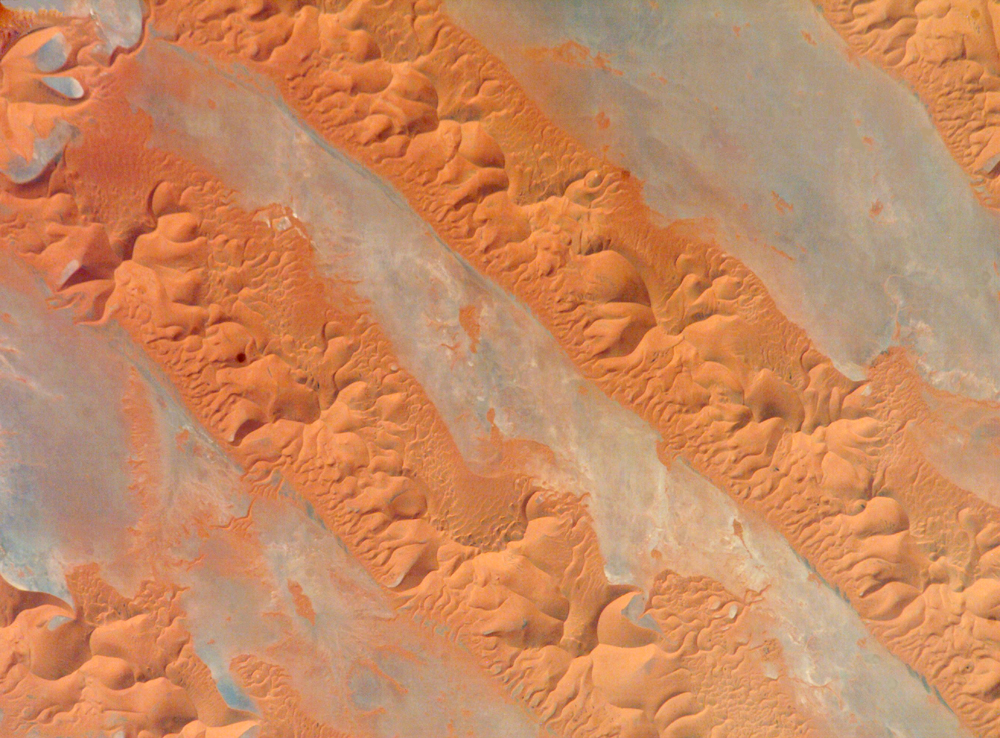 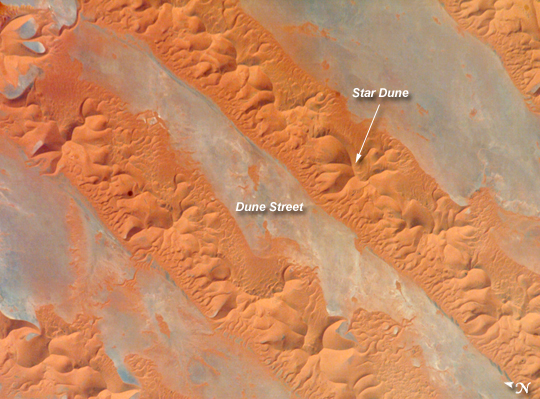 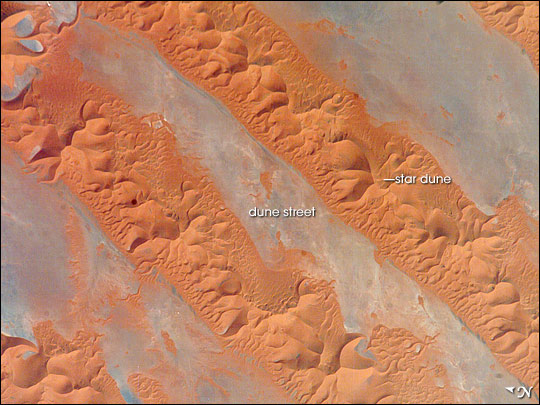 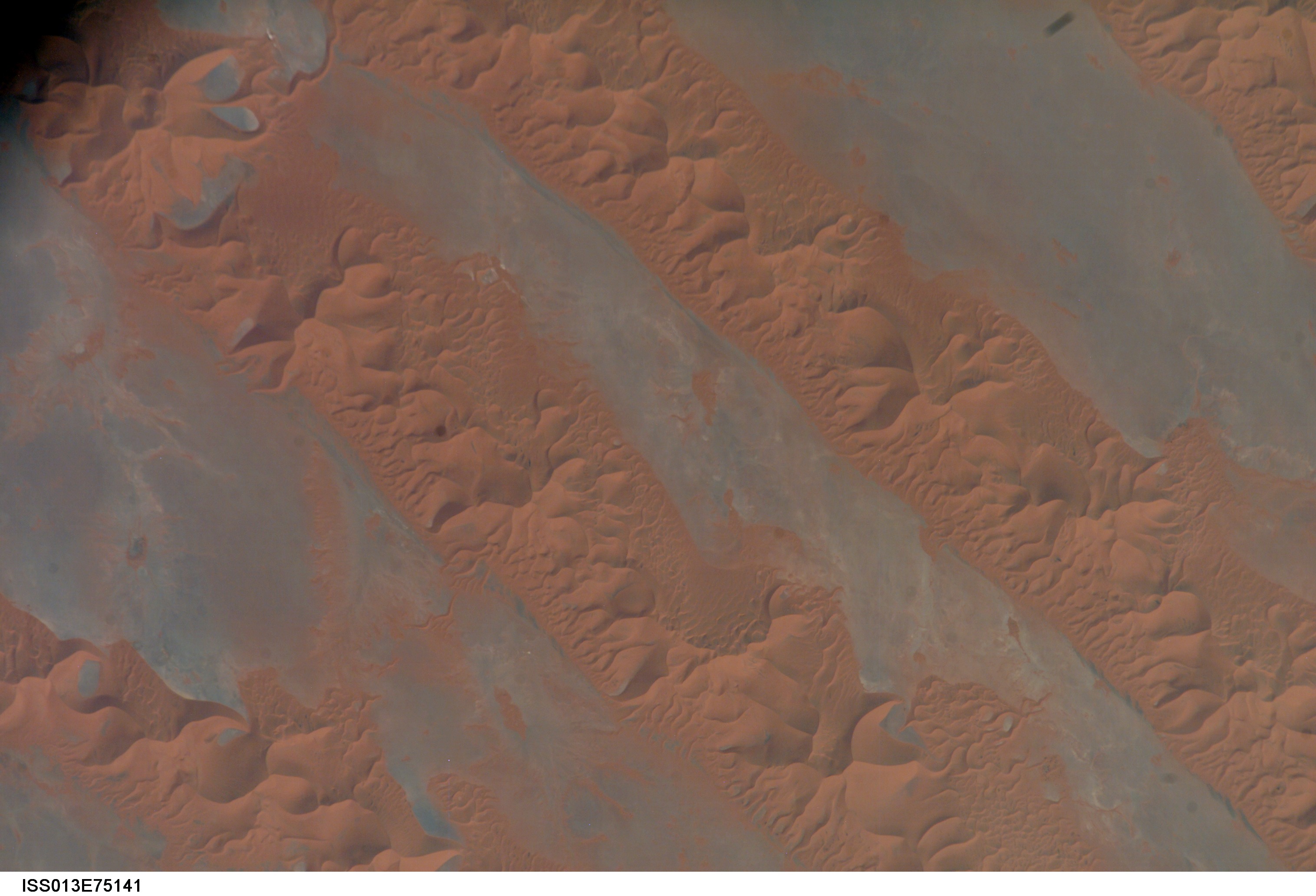 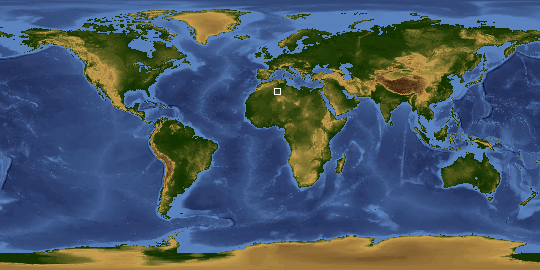 Other options available:
Download Packaged File
Download a Google Earth KML for this Image
View photo footprint information
Image Caption: Erg Oriental, Algeria:
One of the main reasons that rainless regions like the Sahara Desert are interesting from the perspective of landscape science is that the work of flowing water--mainly streams and rivers--becomes less important than the work of wind. Over millennia, if enough sand is available, winds can generate dunes of enormous size, arranged in regular patterns. Long, linear dunes stretch generally north to south across much of northeast Algeria, covering a vast tract (~140,000 square kilometers) of the Sahara Desert known as the Erg Oriental. Erg means "dune sea" in Arabic, and the term has been adopted by modern geology. Spanning this image from a point on the southwest margin of the erg (image center point: 28.9 North, 4.8 West) are a series of 2-kilometer-wide linear dunes, comprised of red sand. The dune chains are more than 100 meters high. The "streets" between the dunes are grayer areas free of sand.

Linear dune chains are usually generated roughly parallel to the dominant winds. It also seems to be true that linear dunes are built by stronger winds. This detailed astronaut photograph shows that smaller dunes, known as star dunes, are built on top of the linear dunes. Star dunes seem to form in weak wind regimes, in which winds blow from different directions in each season, resulting in characteristic "arms" snaking away from a central point. Some scientists therefore think the dunes in this image were generated in two earlier climatic phases, different from that of today. (1) During a phase when winds were stronger and dominantly from one direction (the south), major linear sand masses accumulated. (2) Later, when wind strengths declined, the star dunes formed. [Modern-day features known as wind streaks on the edge of the present erg (not shown), are younger than either the linear or star dunes, and show that present-day, sand-moving winds blow from the southwest.]