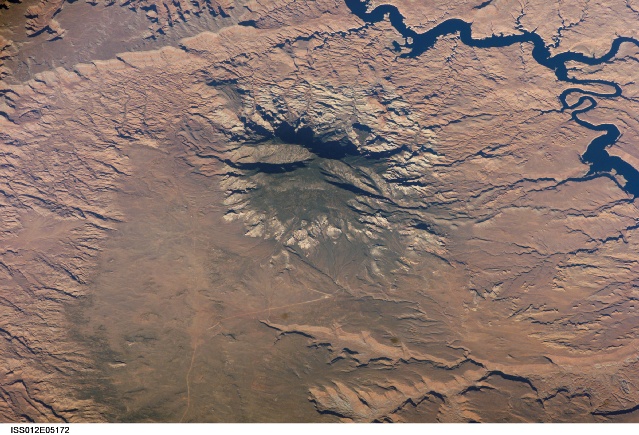 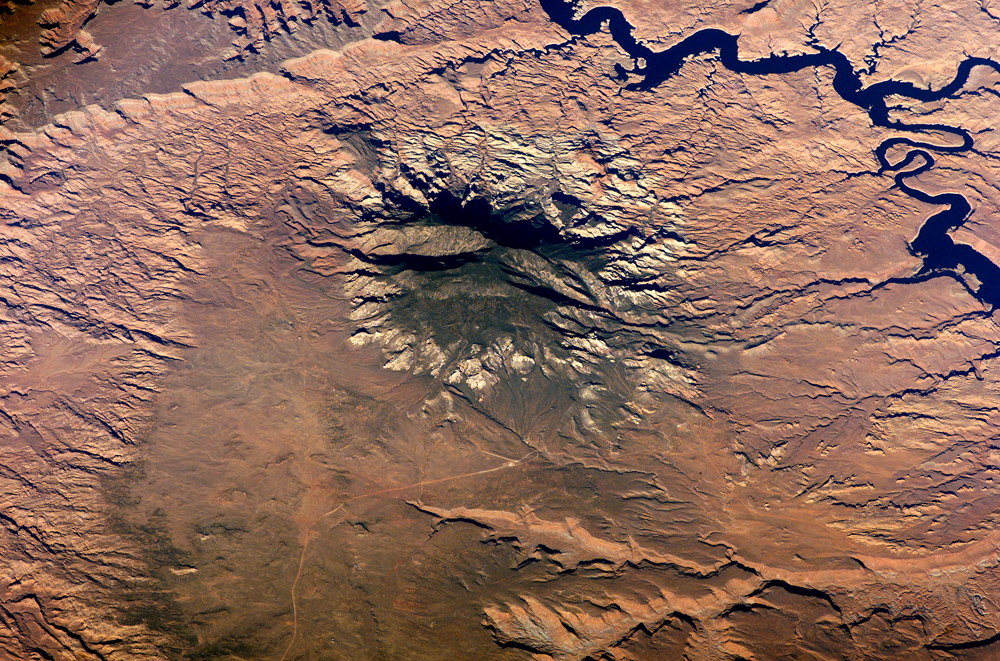 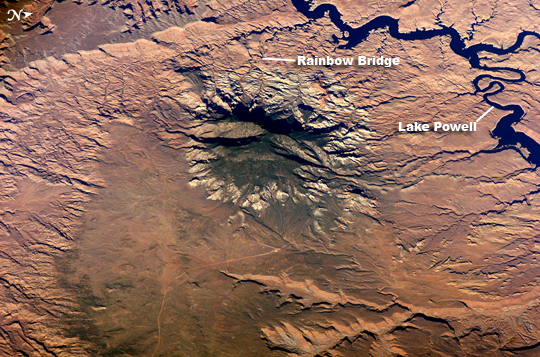 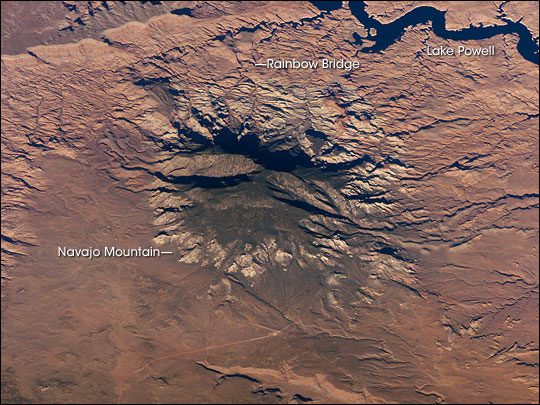 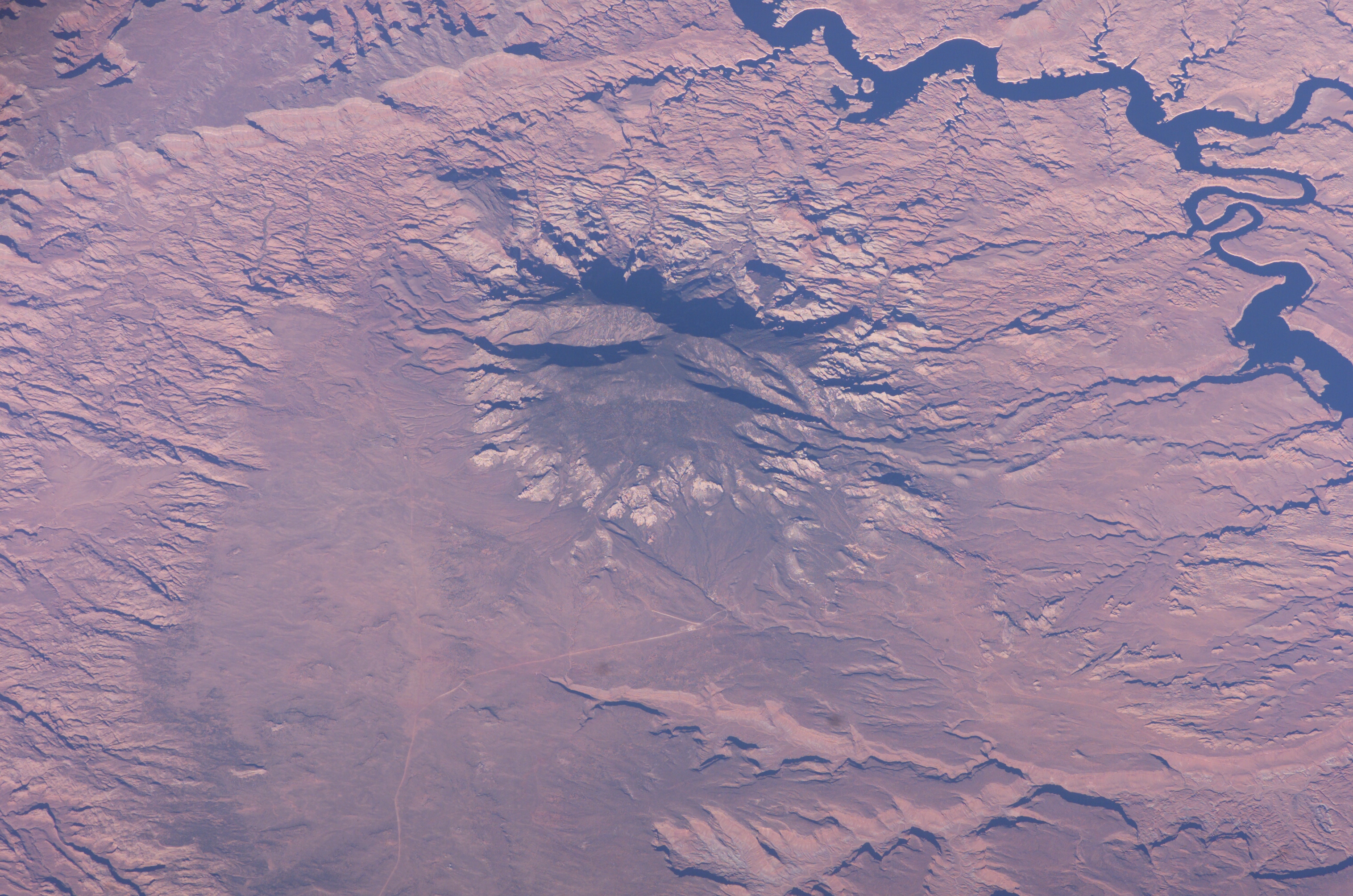 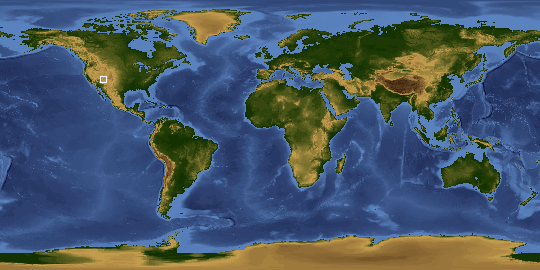 The Colorado Plateau of Arizona, Colorado, New Mexico, and Utah is made of mostly flat-lying layers of sedimentary rock that record paleoclimate extremes ranging from oceans to widespread deserts over the last 1.8 billion years. Navajo Mountain in southeastern Utah is a dome-shaped chunk of igneous rock that intruded into the sedimentary layers and lifted up the overlying layer. Navajo Mountain is one of several of these rock formations, called laccoliths by geologists, in southeastern Utah's portion of the Plateau. This oblique (from-the-side) astronaut photograph highlights Navajo Mountain in the center of the image, surrounded by light red-brown Navajo Sandstone (also visible in the canyon at bottom of the image). The igneous rock at the core of the mountain is wrapped in sedimentary layers. The peak of Navajo Mountain, at approximately 3,148 meters (10,388 feet) elevation, is comprised of uplifted Dakota Sandstone deposited during the Cretaceous Period (approximately 66-138 million years ago).

The Navajo Mountain region has special cultural significance to the Navajo people, who know it as Naatsis'aan (Earth Head). Together with Rainbow Bridge to the northwest (approximate location shown), Navajo Mountain figures prominently as the first settlement area in western Navajo origin stories. Following the military defeat of the Dine (Navajo) by United States forces in 1863, the political landscape was changed by new boundaries and major physical alterations. The establishment of Rainbow Bridge National Monument (1910), and the filling of Glen Canyon by Lake Powell in 1963 (upper right), has facilitated tourism and aesthetic appreciation of this previously remote region. Access to Navajo Mountain is still regulated by the sovereign Navajo Nation, and a permit is required to hike in the region.