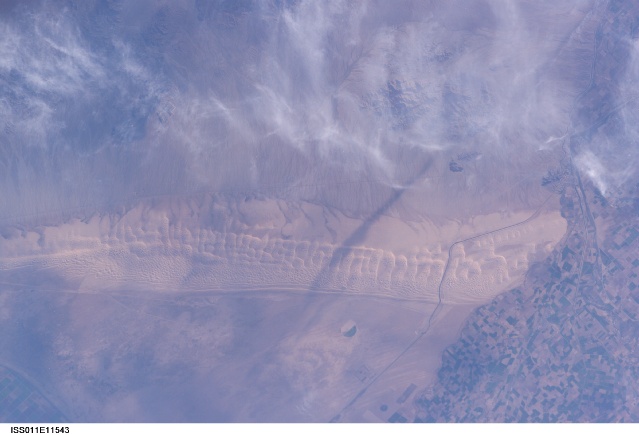 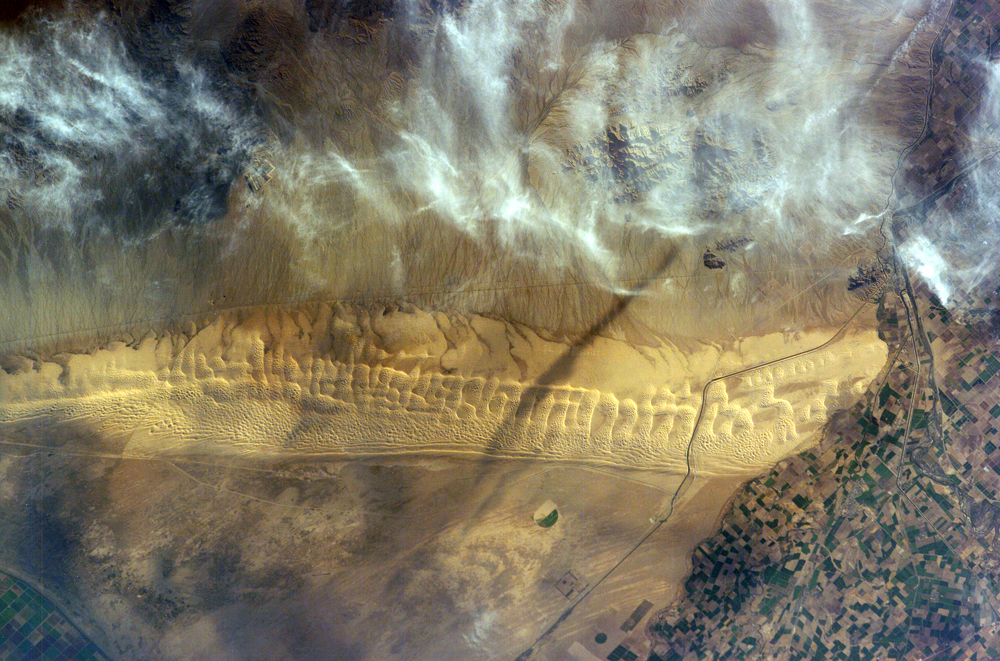 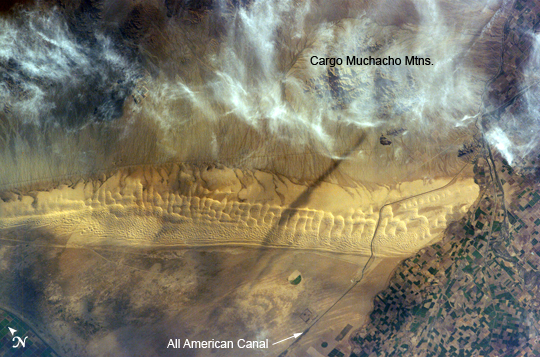 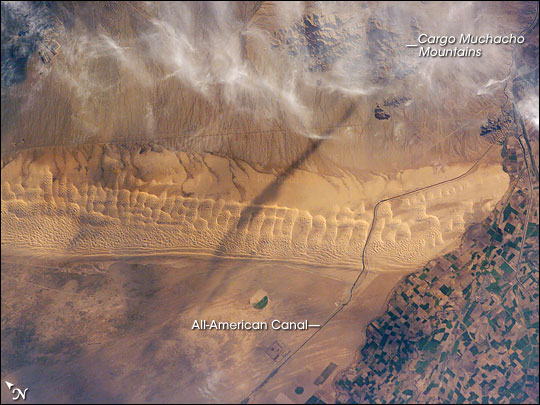 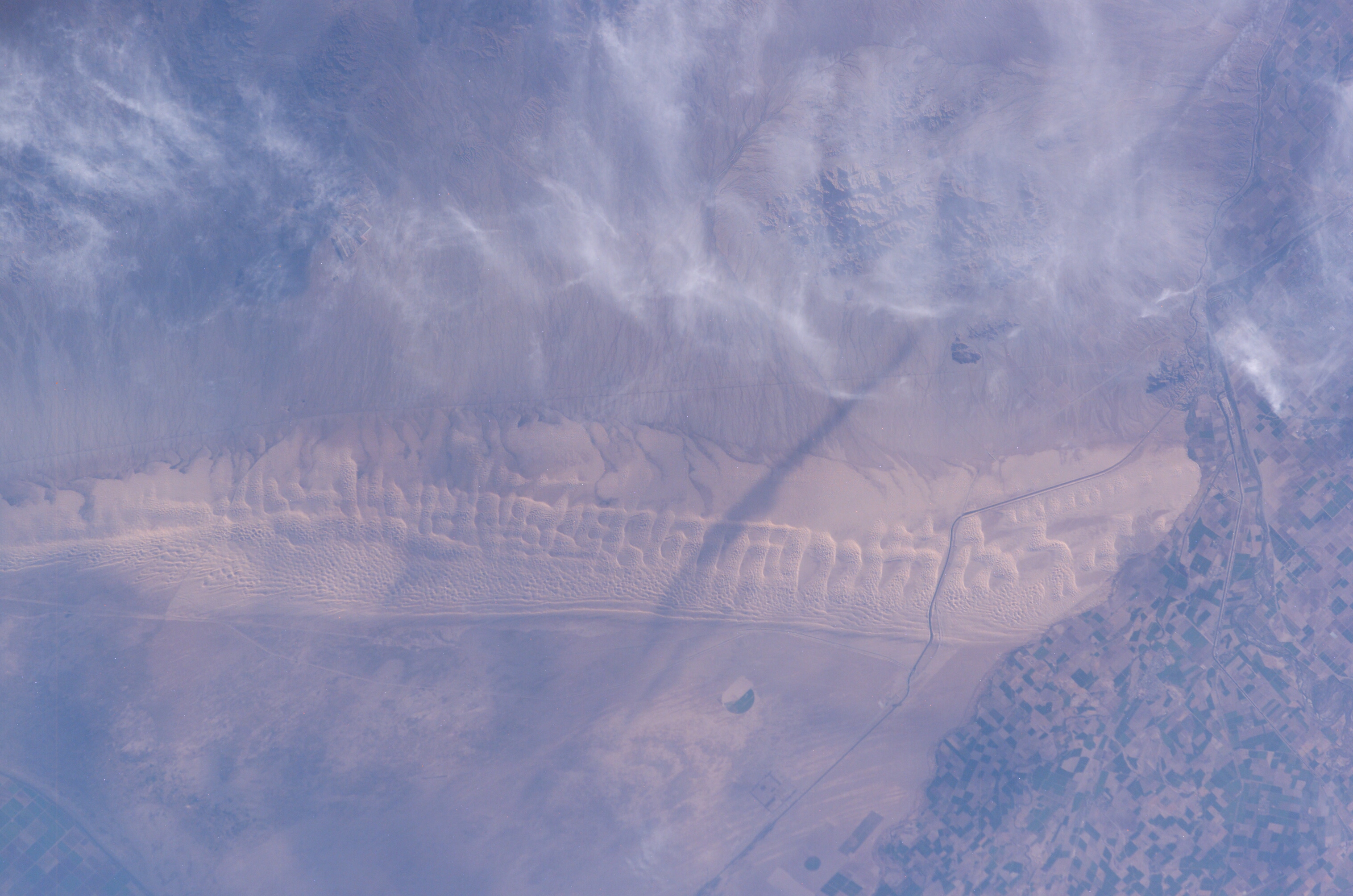 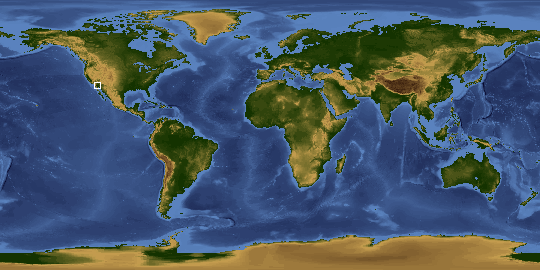 Fans of the Star Wars series of films may recognize the Algodones Dunefield--also known as the Imperial Dunes--as portions of the imaginary planet of Tatooine. While not planetary in scale, this dunefield located at the junction of three states (Arizona and California in the United States; Baja California del Norte in Mexico) is a distinctive feature of North America. The field is approximately 72 kilometers long by 10 kilometers wide (45 miles by 6 miles) and extends along a northwest-southeast line that correlates to the prevailing northerly and westerly wind directions. The dunefield is a wilderness area, with the only human structure being the All American Canal that cuts across the southern portion from west to east (right side of view). A checkerboard pattern of farms in the Colorado River floodplain is visible on the Mexican side of the border (far right). Wisps of cloud obscure the Cargo Muchacho Mountains (top).

Distinctive dune forms visible in this astronaut photograph include transverse megadunes and linear dunes. The transverse dunes, appearing much like a large tank tread along the long axis of the dunefield, are the largest features. They were formed by strong and constant northwesterly winds. A fine pattern of smaller dunes has formed along the crests and windward (northwestern) sides of these large dunes and point to continuing sediment transport activity. Networks of small dunes along the western side of the dunefield suggest that wind direction here is more variable, and perhaps influenced by the large transverse dunes themselves. Long, linear dunes extending northwest-southeast are visible along the western edge of the dunefield.

The presence of vegetated drainage networks along the northeastern border of the dunefield and the relative lack of dunes themselves suggest that dunes are not migrating rapidly along this margin. The majority of dune migration today occurs at a rate of approximately 0.3 meters per year (1 foot per year) along the southeast margin of the dunefield.